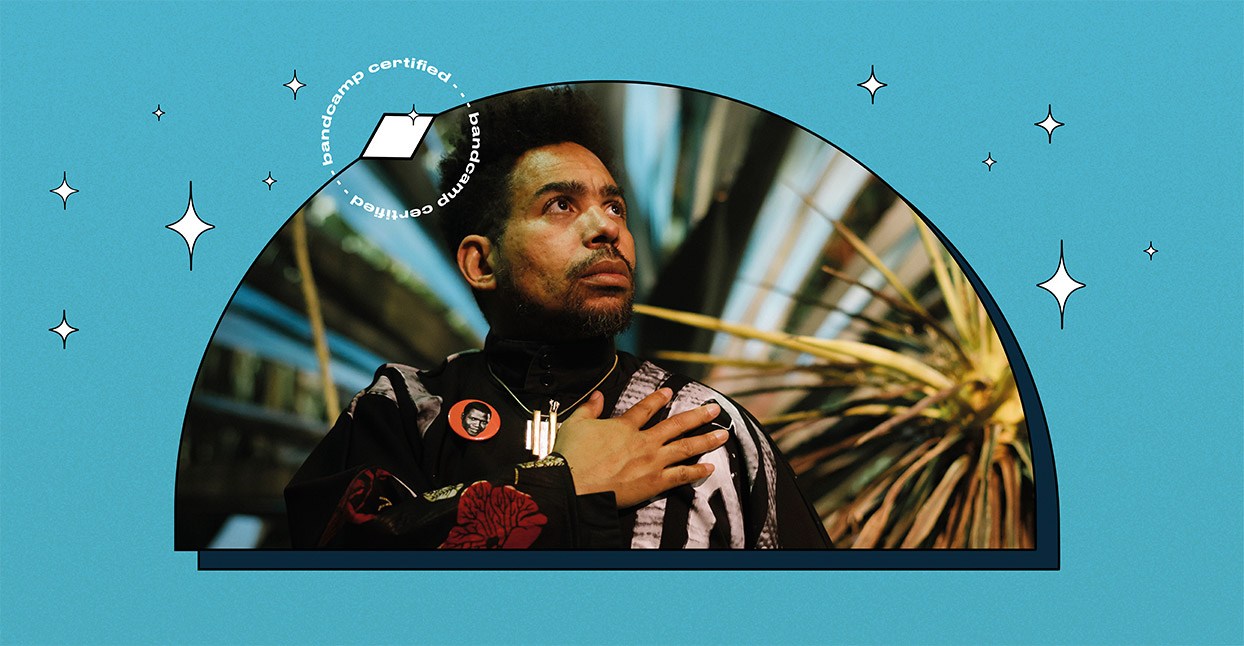 In 2014, Damon Locks was teaching art to prisoners at the Stateville Correctional Center in Illinois when Mike Brown, an unarmed black teenager in Ferguson, Missouri, was gunned down by a white police officer. That incident set off a wave of local and national protests; it also set off something in Locks. He began researching the U.S. criminal justice system, which imprisons black men at a rate six times that of white men, and allows law enforcement officers to get away with murder.

At the time, Locks—a Chicago-based punk veteran, vocalist, producer, and sound artist—was feeling creatively stuck, and didn’t know how to process his despair. Needing an outlet, he started writing poetry, and made a beat using an old drum machine—even though he didn’t have a clear sense of what to do with them when he was done. Then one day, while he was driving, he heard the Pointer Sisters’ song “Yes We Can, Can” on the radio, and inspiration struck. “I was like, ‘This song’s amazing! We could use this now,’” Locks recalls. “This sounds like now. And then I was like, ‘I’m going to call this [instrumental] ‘Sounds Like Now.’”

That song appears on Locks’ new album, Where Future Unfolds, now backed by a vocal quintet, clarinets, and live percussion. Its lyrics speak directly to the pain of seeing black people slaughtered, and their killers showing no remorse. “Every morning there’s more talk of murder,” goes one line. “Every morning, at least one less alive.”

Where Future Unfolds is a stunning achievement, an album that draws on elements of gospel and early-‘70s Black Liberation jazz, capturing the angst of a community faced with extinction, yet strong enough to persevere. It began as a solo sound collage project; Locks sampled speeches from the Civil Rights era for an improvised set he’d perform with his drum machine. In the four years that followed, the project swelled to become a collective called the Black Monument Ensemble, with five singers and six dancers, and featuring Angel Bat Dawid on clarinet, Dana Hall on drums, and Arif Smith on percussion. The album was recorded live in November 2018 at the Garfield Park Botanical Conservatory on Chicago’s West Side; to listen to it is to feel the agony of loss—the belief that no one cares about black life, and the battle against man-made constraints that conspire to destroy. On Future, Locks spins anger and sorrow into a vivid depiction of the struggle it takes for black people to simply exist in the United States.

But it isn’t all death and despair: “Rebuild a Nation” instills hope that the next generation can turn the rubble we’ve left them into a civilization that is more equitable and more functional. The track opens with an a cappella refrain sung by 7-year-old Rayna Golding, whose tiny voice—declaring “I can rebuild a nation”—makes the song feel optimistic and heartwarming. On “The Colors That You Bring,” the Ensemble locks into a mid-tempo groove that gives way to the sampled voice of actress, singer, and civil rights activist Lena Horne, whose modest declaration of “I’m not gonna stop” could be the album’s mission statement.

Long before Locks created the Black Monument Ensemble, he was a precocious eighth-grader in Montgomery County, Maryland who was introduced to punk rock by older students in his art classes. At the time, Washington, D.C. had a thriving punk and hardcore scene, and Locks—then a budding musician and creator—started going to shows in the city, where he saw legendary acts like Bad Brains and Minor Threat at the height of their powers. “I’m like, ‘Wait a second, people can make music and put out records without being on the radio or on TV?’” Locks recalls. “So I just dove into punk music and hardcore music full on.” Locks is best known as the vocalist of Trenchmouth, a post-hardcore band (which featured a pre-SNL Fred Armisen on drums) and frontman for the Eternals, two experimental outfits known for throwing a wide range of music into the same pot. Like Bad Brains and Minor Threat, Locks wanted his music to sound different every time.

For the Black Monument Ensemble, Locks took musical cues from a 1972 clip of the Voices of East Harlem performing their song “Right On Be Free” for a group of prisoners. “That was super inspirational,” he says. “I started to really dig into these jazz records that use large vocal groups,” including the Sun Ra Arkestra and the Freedom Singers, the latter of which was a big musical draw at civil rights rallies. Locks had been buying records like these for 30 years. “I started listening to all of them again—including all of the civil rights recordings that are filled with gospel music,” he says. “I thought, ‘Since this is the time period we’re living in, maybe this kind of framework could speak to people again.’”

The Ensemble performed its first gig at the Hyde Park Art Center in Chicago on June 15, 2017. The city makes up a large part of Locks’ creative DNA; he moved to Chicago from New York in 1988, and made it a point to follow its historical black arts movements, like the Association for the Advancement of Creative Musicians, and the AfriCOBRA collective, which formed in Chicago in 1968. He studied poets like Dr. Margaret Burroughs, who co-founded The DuSable Museum of African American History and taught in the same Stateville Correctional Center where Locks teaches today. “All of these strong amazing people are heroes of mine, and since I’ve been [in Chicago] so long, I see the paths that they walked as inspirations for me. I’m walking down the same streets, and working in some of the same buildings. So I feel honored to hopefully extend their conversations.”

Where Future Unfolds is a reflection of everything Locks has absorbed as a creator, a Chicago resident, and a student of art and music. It is his most challenging and most rewarding work to date. “I feel like I’m trying to create something that speaks truthfully and that registers with people,” Locks says. “I feel like I am starting a project of ideas, but it’s really there for the people to really express themselves and create something that makes connections with the listener. I want to help push the needle a little bit.”