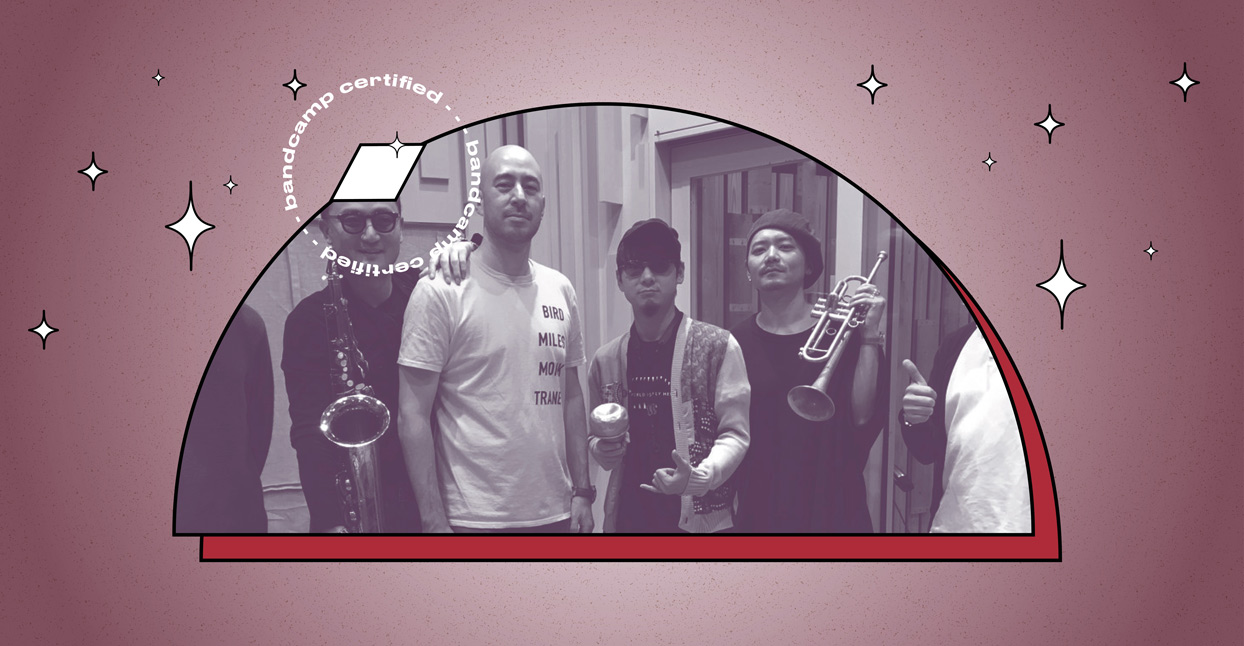 “I grew up biculturally and bilingually,” explains Mark de Clive-Lowe, the half-Japanese, half-New Zealander keyboardist and producer behind the Tokyo-based jazz collective Ronin Arkestra. “It was always there, but it was just what I was; it was something I took for granted, to be honest. I didn’t really know how to share that through my art.”

Sonkei, the Arkestra’s first full-length album and second release overall, is the latest chapter in a search for Clive-Lowe’s cultural identity. It features an eight-piece ensemble (the Arkestra has 10 members, but three of them rotate in the drummer’s seat) exploring the leader’s trademark fusion of progressive jazz and electronic dance music. While every musician but de Clive-Lowe is entirely Japanese, the music itself doesn’t obviously draw on that country’s musical touchstones. That aspect was covered in the two-part Heritage series, with which de Clive-Lowe began 2019. It’s the inverse of Ronin: Heritage and Heritage II drilled into Japanese folk music, but didn’t include any Japanese musicians.

“I needed to do a project with a Japanese crew,” he says, speaking by phone from Los Angeles where he currently lives. “Where Heritage is about Japanese musicality, the Ronin Arkestra is just about doing it with my Japanese homies.”

Indeed, the band is an all-star assemblage of musicians. Its stylistic spectrum is a wide one. Tenor saxophonist and flutist Wataru Hamasaki is one of the country’s most celebrated jazz players; Ruiki Shinpei is the trumpeter for the Kyoto Jazz Sextet; Nobuaki Fujii plays drums in the fusion band Sleep Walker; bassist Kenichi Ikeda leads the popular acid jazz ensemble Rootsoul; drummer Hikaru Arata works in the experimental soul outfit WONK; and guitarist Tsuyoshi Kosuga is one third of the genre-defying trio Cro-Magnon. Rounding out the motley crew is Sauce81, a producer and electronic effects wizard, and drummer Shun Ishiwaka.

Their debut EP, First Meeting, dropped in March. Remarkably, considering the density of the personnel and the music itself, de Clive-Lowe didn’t write arrangements. In fact, he barely wrote compositions. “I just did sketches,” he says. “For the EP, I wrote them out right there in the studio while everyone was waiting to record. For this album, I spent about four days writing before I went to Japan, but it was still just sketches.

“I wanted to bring in a framework that allows the musicians to bring their personalities to the table, and not be straitjacketed,” he adds. “So there’d be these sketches, and I’d intuit the arrangements and spell them out right before we hit record. And then we’d just jump off the cliff.”

The results combine spiritual jazz, thick with horns and rippling piano, with Afrobeat grooves and the crashing beats and synth lines of London’s underground club scene, where de Clive-Lowe first broke through in the ’00s.

If there’s nothing that reads as specifically Japanese in the music, that’s a feature, not a bug. Before London, de Clive-Lowe found his inspiration hanging out in the dozens of jazz clubs that dotted Tokyo in the early ‘90s. “Every night, I was seeing predominantly local musicians perform, very much in the American tradition,” he explains. “The Japanese jazz tradition has always aspired to the American sound, specifically the New York kind of sound. At the same time a lot of American musicians were touring in Japan. It was kind of like being transported to what I imagined the ‘50s and ‘60s jazz clubs in the heyday of New York or Paris being.”

That being said, Japanese identity certainly factors into the project. For one thing, de Clive-Lowe borrowed the track titles on Sonkei—as well as the sunflower on its cover—from anime series Samurai Champloo, one of his favorites. Then there’s the band name; Ronin were a class of nomadic samurai of Japan’s feudal period. (“Arkestra,” of course, refers to the band led by the eccentric American musician Sun Ra, another of de Clive-Lowe’s favorites.)

And then there’s the very fact of the band’s provenance. “The musical language comes from us all understanding jazz, and a mutual love for J Dilla,” de Clive-Lowe explains. “At the end of the day, though, we’re just getting together and playing music at a studio in Tokyo. The language of the studio is Japanese, the hang is Japanese, and so that’s going to filter into the vibe of the music.”