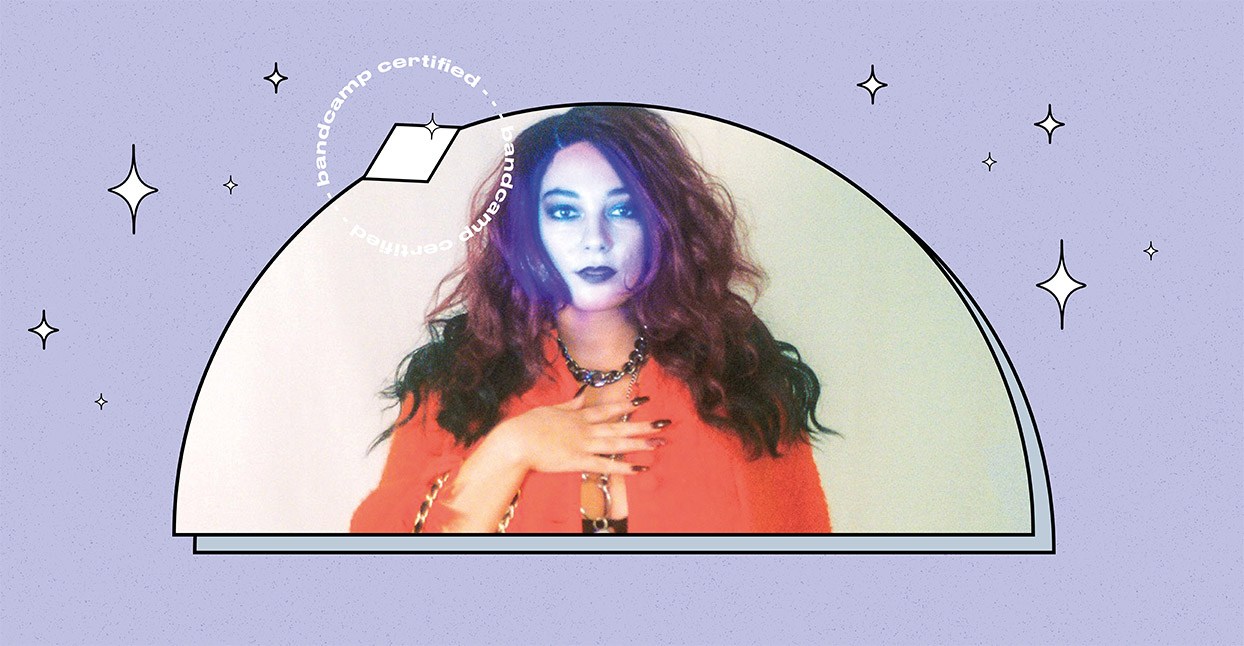 In the age of Internet voyeurism, where social media users brand their own self-destruction and deprecation for engagement, DJ Haram is—in words borrowed from a friend’s Instagram post—“not trauma bonding with you hos anymore.” For the past year, the Philadelphia-based, New Jersey-bred DJ and producer has been questioning the inroads to recovery: “What’s the substance of the connection made through this?” she asks, “Who is really feeling healed?”

On her latest EP and Hyperdub debut, Grace, DJ Haram (real name Zubeyda Muzeyyen) puts an end to narrating the downward spiral, and opts instead to present the dark of family tragedy into a more convalescent light. “I can’t help but have everything I touch, remember what I remember,” Muzeyyen says of her newest work, which consists of mysterious, almost interstellar synth lines gliding over her signature Middle Eastern-inspired drums. It’s this penchant for assertive, non-Western percussion that firmly situates all of Muzeyyen’s productions firmly into an iconoclastic club context.  She also pairs up again with Moor Mother, experimental artist and co-collaborator for their project 700 Bliss, who sublimates grief into poetry on the sole vocal track “Candle Light.” Amid what sounds like gravelly TV static, she recites, “Cycle of life / Risk my life to bring you light / I take flight.”

Like the rest of Muzeyyen’s work, Grace weaves together the threads of its creator’s diverse musical history. Growing up, she remembers a bachelor uncle who would entertain her and her sister at home by playing the accordion, an instrument she still fondly regards as “grand in a funny, theatrical way,” as well the darbuka drums. It was also during this time when she would join the morning commute with her mom and listen to New York area radio stations like Hot97 on her way to elementary school. Today, Muzeyyen fuses together principal Middle Eastern rhythms chiftitelli and beledi with her affinity for hip-hop by changing low-ends to 808s and replacing the traditional percussion with snares.

Although DJ Haram remembers Arabic pop of the ’80s and ’90s filtering through her home and live folk musicians at extended family weddings, she didn’t try her own hand at music—other than a short-lived stint drumming in high school band—until 2012 when she became a part of Philly’s DIY scene. Simultaneous to attending hardcore, noise, math rock, and other punk derivative shows in dingy basements and speakeasy bars, where she was able to “hold space” for the first time as a woman in mosh pits, she lived with DJ and producer Precolombian, whose hybrid Peruvian and Latin diaspora sets—sprinkled with irreverent touches of chart-topping pop—emboldened DJ Haram to her own non-Western experiments. Four years later, she was asked to join Discwoman’s roster, a turning point in her career that sparked international tours in Europe and East Asia.

Muzeyyen’s musical journey is also a spiritual one; it’s what has helped her grieve for the death of her cousin last year and continues to guide her through the creative process. “My connection to God has always been there,” Muzeyyen says. “I find a lot of peace and comfort with the tools I have been given through the teachers in my upbringing, as well as different Muslim scholars and writers.” As a queer woman involved in nightlife, she’s had to negotiate elements of her lifestyle that others would deem contrary to the laws of traditional Islam. Even her DJ name, Haram, which translates to “forbidden” in Arabic and refers to any act proscribed by Allah, points to this dissonance. “I feel it’s best something to practice alone, you know?” she says. This solo exploration is perhaps what led to the formation of Muzeyyen’s own mythological world, the art and soundtrack of which crystallize on Grace.

Among the inspirational literature and research material for her EP concept is the book Islam, Arabs, and Intelligent World of the Jinn by Georgetown Professor of Arabic Literature and Culture Amira El-Zein. Jinn are shape-shifting, “imaginal” beings in Islamic folklore that have the same free will to act on their unbridled desires as humans. The word “imaginal,” as Haram explains to me, “share the same quality of imaginary things: they are mystical and they don’t exist on a material reality, but the undoubtable existence of imaginal beings are what differentiate them from imaginary beings.” These characters represent individual tracks whose intricate social dynamics mirror the instrumental cohesion on Grace. They also visually congregate among spilled wine glasses, bongs, and fruit platters on the album cover, as illustrated by Samantha Garritano.

The Angel of the Mountain, the bearded figure pictured with the white bandana, represents the oscillating flute opener “No Idol” and is one of the most meaningful for Haram. It’s a dedication to her cousin and references a Quranic story of the prophet Muhammad. When Muhammad’s uncle is killed in a battle, the Angel proposes pushing two mountains together to crush their adversary. The prophet, empathic as ever, rejects the bloodthirsty suggestion in favor of holy prayer. The tale’s moral of good muddled by evil impulse, life fleeting the shadows of death, and finding grace within suffering encompass all the dualities that fascinate Muzeyyen. Hence, this is why she titled the EP’s third track, characterized by the militant sounds of cocking guns and staccato whistles, “Gemini Rising.”

These juxtapositions are further underscored by ominous synth melodies advancing upon light, touch-and-go percussion. Jinn also expose themselves to humans through resonating rhythms. While there has yet to be a moment when Haram realized, as she puts it, “Oh shit, some Jinn are revealing themselves to me,” she believes the energy of the drums are “the machinery of the body—the soul and the spirit.” Just as she has constructed her own imaginal world, Haram has internalized each triplet rim shot and pounding darbuka beat she’s composed as part of her corporeal existence. “They exist within you and they exist outside of you,” she says. “The rhythm of the Jinn and the Jinn speaking through rhythm. They are both.”

“Most Gracious” is the name of God in all religions. Gracefulness is the dignified elegance we attribute to the holy. Grace manifests in salvation of sinners and the benediction of saints. Muzeyyen hopes that repeated exposure to her EP name—a far cry from its original title of K.O.D. (Kiss of Death)—“can possibly embody positive changes in attitude and strives towards new ways of being.” On her newest release, DJ Haram chooses to navigate affliction by counting her blessings and, meanwhile, encourages her listeners to do the same.