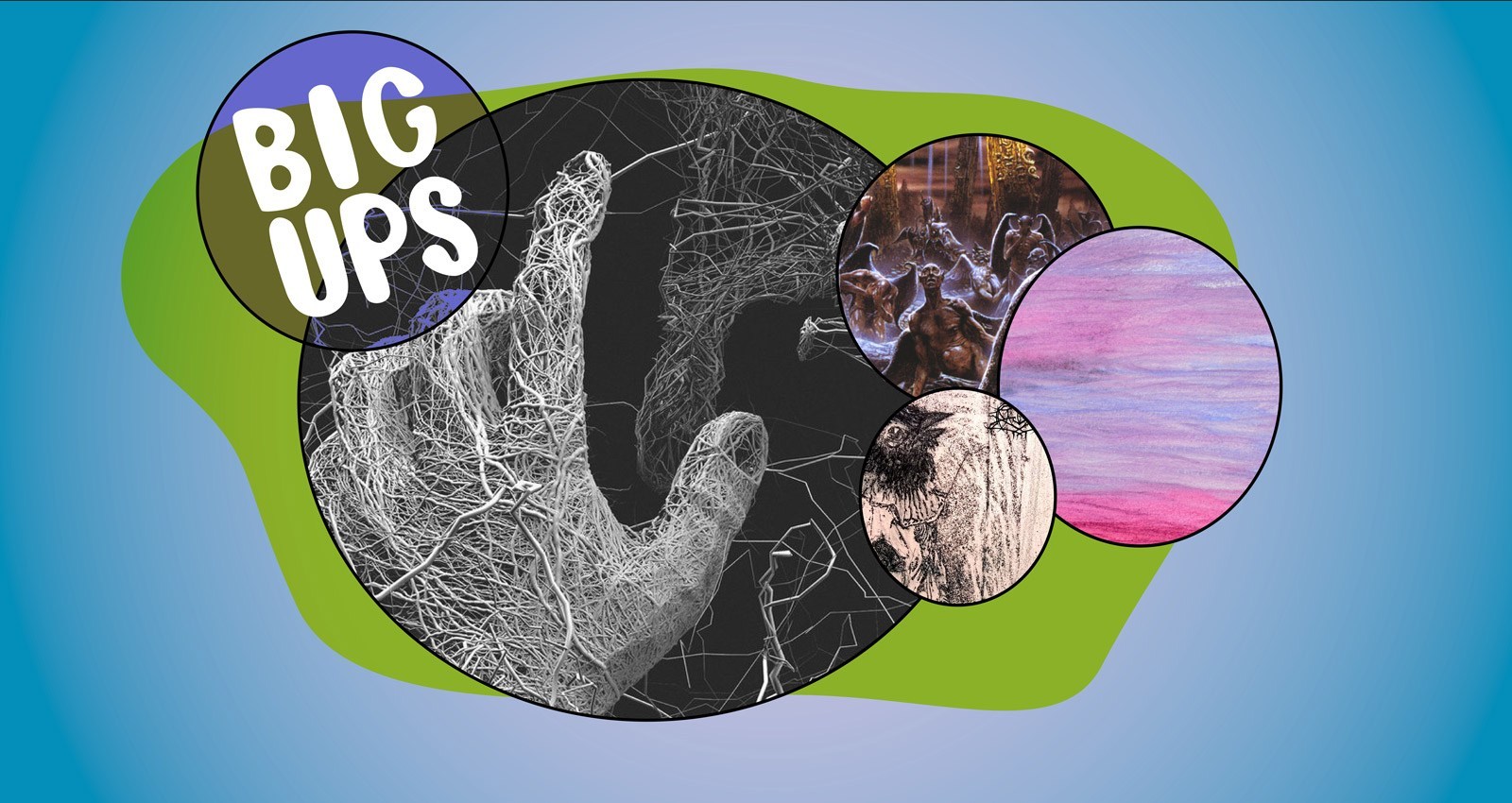 “Everyone has an opinion when it comes to what somebody is making, but the only one that matters is the creator’s. You either connect with it or you don’t.”

“Heavy music is about having a healthy outlet for the complex emotions you have within you,” explains Bannon. “Applying that narrative to—for lack of a better term, ‘death metal’—has a different air about it. I’m taking that hyper-aggression and applying a positive mantra to it. I’m not Tony Robbins, but at this point in my life, I want to strive to be a better person. That’s the way I think you should live in life; there should be a desire to emerge less damaged.”

Bannon has also embraced a sense of urgency in recent years, leaving the long-delayed solo and duo recordings of his Supermachiner project behind for more focused music.

“I’m 43 years old,” says Bannon, “I’ve been making ‘aggressive music’ for more than half my life, so I just want to be productive—making things that are exciting to me. I feel like I’ve done myself a creative disservice by sitting on a lot of records for a long time, so I’ve just been trying to set things free and move on…I’m just going for it, you know? If I have the idea, I do it.”

Below, Bannon and McKenzie (his bandmate in Umbra Vitae and Wear Your Wounds) break down some of their favorite Bandcamp finds, including black-metal beacons, old-school overlords, and video game vanguards.

An Isolated Mind
Self Titled

The first thing that connected with me about An Isolated Mind was its cover art: it’s like you’re looking at an abstract painting. It could be virtually anything, even a pop record. The sonics coming at me were completely different than what I expected—a juxtaposition between shoegaze and blackened metal that I find really exciting. It reminded me of when Deafheaven put out their demo, and I ended up working with them on a couple records. It occupies a similar sonic space, but has its own unique character.

There’s a lot to unpack with both of An Isolated Mind’s records. Self Titled is basically demos for I’m Losing Myself; one is fully realized, and one feels more like sketches, which is just as exciting to me. I love to hear how somebody builds songs and characters.

I am a fan of everything Robin [Proper-Sheppard] does. The Infinite Circle is a good entry point; it’s absolutely incredible. But you really can’t go wrong with his catalogue. He’s a lifelong musician; there’s so much material out there under the Sophia name. I connected with him personally, when he had a band called The God Machine. They had some momentum in the mid ’90s, but then the bassist passed away, the band kind of ended, and he started Sophia.

I’ve followed his work since then. He’s just an incredible songwriter, a really unique voice. It can be quite heavy sometimes, and quite delicate other times. I’ve just always admired what he creates. It’s all beautiful — a lot of complex emotions. His band is an evolving collective of sorts. Sometimes it’ll have an orchestra attached to it, or it’ll be a large ’60s-like band, or it’s just him and a guitar. He just approaches it from all angles. To me, it’s always interesting to hear him explore different voices.

I appreciate a lot of things about Krallice. They’re a really prolific band, and have this incredible independent spirit—this need for experimentation—that’s really inspiring. No record is quite the same; they veer in all these interesting directions. Sometimes they’re really sparse, and sometimes they’re hyperkinetic: almost like free-jazz, but always extremely intense in terms of its metal leanings and technical proficiency.

I included both of these records, because people should always be paying attention to what’s happening with them. I stumbled upon [Wolf / Astomatous] the other day. It’s a split with another one of [bassist] Nick [McCaster]’s projects. I picked the record they did with Dave [Edwardson], the bass player from Neurosis, too; It came out about a year ago. To me, Neurosis is one of the most important bands of all time, so to hear Dave’s voice in a non-Neurosis fashion at this point was really surprising and interesting. Having this guttural voice that I related so much with another band interjected into Krallice was pretty awesome. I don’t think people talked about that record as much as they should have. It’s an awesome piece of work.

As a band, Krallice is next-level technical metal. I can’t even wrap my head around their records on a singular listen. I can get an impression of what they are, but then I need to give myself serious time with the record. They approach their music more like fine art than a band crafting songs. I find that really inspiring. It’s like, ‘How do you even come up with that idea?’

Hunter [Hunt-Hendrix] is incredible, a really dynamic artist who defies what a genre is. It’s exciting to follow as a fan. I don’t think people give him enough credit; a lot of metal purists got affected by the way he approaches heavy music, but you can’t think like that. You have to progress. It doesn’t mean you have to like every aspect of everything that comes out, but you should at least appreciate the fact there’s artists pushing the envelope and approaching things from different angles. Everything he’s done has been that way; I connect with the spirit of it. And that’s fucking great.

I stumbled upon his new single (“Pasaqalia II“) the other day. I didn’t even know it was out. It was basically a reinterpretation of a song that was on H.A.Q.Q., the most recent Liturgy record—a really cool take. I never thought I would hear that song disassembled and reconstructed in that way. I found that super exciting.

H.A.Q.Q. is fantastic, a perfect continuation of what he’s done before. Unpredictable. It has a sort of electricity around it. The first time I listened to it, I had to stop midway through because it was kind of punishing me. Once I came back to it, it kind of blew my mind. It’s not a background record; it’s a full experience, an incredible masterwork that just fell out of the sky and takes time to process, like a great novel. I’m not a giant reader, but when I see a thousand page book come out, I’m like, ‘Wow, a lot of effort went into that.’ This record was like that to me: a monster that came out of nowhere. I don’t feel like I’ve taken the whole thing in yet.

Ulcerate
Stare Into Death and Be Still

I haven’t listened to this whole record yet, because it just came out, but I’ve loved everything Ulcerate. They’re been the forward-thinking death metal band for a long time now. Everything they do is what I want heavy music to be. It’s dark; it’s ominous; it has an amazing atmosphere and mood; the lyrics are interesting.  And their riffs are very angular, weird, and all over the place; you could totally appreciate this band just from a scholarly perspective, but at the same time, they’re weaving this tapestry of dark atmosphere that permeates every song. It’s always building to some ominous peak.

They also walk the line between people who want their death-metal primitive and dumb, and people who want it to be technical. This band does both. And they’ve gotten better with everything they’ve put out. When I put on one of their records, I listen to it back to front.

Matt Creamer writes a lot of chiptune-sounding stuff for video games, but he does a lot of other compositions, too. He’s a very well-rounded songwriter. Because his music is often soundtracks, they’re not entirely his vision; he’s doing what someone else wants him to do, but he always manages to have this really unique 8-bit style—a lot of different stuff with synths.

I don’t think I’ve listened to this one all the way through. I picked it because it’s a more recent one he did. Another one I listen to a lot is a soundtrack to a game called Treasure Buster that’s pretty cool, and he did a record called Anomaly that’s like death-metal with chip-tune sounds and vocals processed to sound like Nintendo. It’s really interesting.

This is nightmarish black-metal with a really threatening atmosphere. Everything they release sounds like something bad is about to go down. I’m used to calling things brutal in a heavy way—like Suffocation brutal. But there’s plenty of death metal that’s brutal in a different way. There might not be any palm-muted riffs, but the ferocity of the whole recording is this relentless storm of noisy instruments.

With all of their projects, I’ve noticed they’ll either be these really fast blasts with slow, almost spoken vocals over the top, or they’ll be really fast speed picking with a doom-y drum beat. So it always has this disorienting feel. I’ve listened to this record over and over again since it came out—it’s awesome.

This guy is Norwegian. I guess you could call his music “ambient”—a lot of New Age-y synths.

I first heard his Silver Beach record on a blog a while back, and I’ve been listening to him ever since. He’s got a lot of his stuff out now. I think Sources might be his first Bandcamp release, though: a collection of stuff he did in the late ’80s that never got released.

There’s a lot of New Age out there that’s cheesy. I grew up listening to some of that stuff, too, but you could put on one of his recordings and not feel like you’re a mid-’90s mom. It’s not quite Live at the Acropolis Yanni; more like a late ’70s, early ’80s, weird synth prog record.

My listening habits haven’t changed since all of this [COVID-19] stuff happened. I listen to plenty of metal; to me, heavy music is empowering. I might listen to something like Aoratos if I’m anxious about things because it makes me feel united with other weirdos out there. Or I might throw on something like this because it’s very calming. It just depends on the day.

Immolation
Here in After

Immolation is classic death-metal, but these guys are still a super hard-working band, always out making records. They’ve been putting in the time for decades, and they still rule. Here in After is just such an evil record.

The song “I Feel Nothing” is like apathy itself, and it has one of the best lines of any death metal song ever: “I don’t want his kingdom/ My kingdom is here.” And then they play this sinister riff. The singer (bassist Ross Dolan) has an iconic death-metal growl; you know it’s Immolation when you hear his voice. And he says those words with such conviction. The riffs are hideous. At the time, they were really ugly for death metal.

When I was younger, I didn’t get it. I liked death metal that was a little easier to digest. It was a little too dissonant, and took a little while to grow on me. When they put out Close to a World Below, it just clicked. Like, “Oh, I get what they’re doing.” Then I went back and listened to everything.