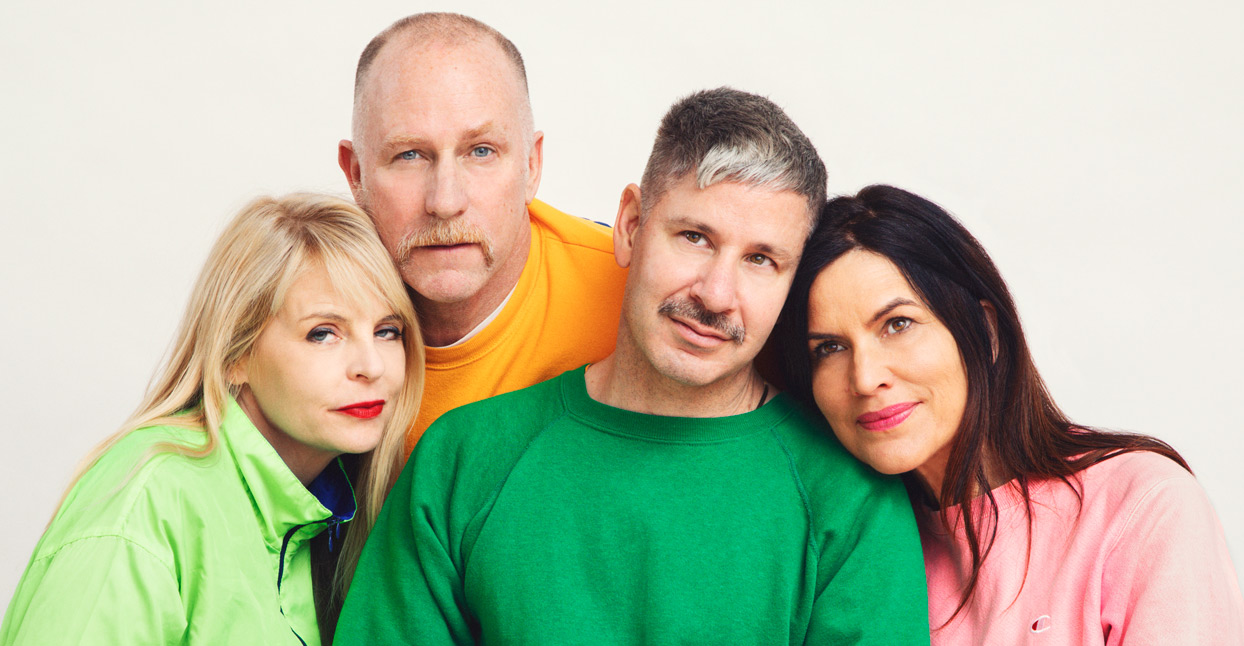 Some artists slow down as they age; Roddy Bottum’s artistic output has done exactly the opposite. The 55-year-old is best known as the keyboardist of legendary alt-metal band Faith No More, who, after reforming in 2009, released their first album in nearly 20 years in 2015. Throughout the 2000s, the prospect of a new Faith No More record was a fantasy for fans, so the fact that Sol Invictus even existed felt monumental in and of itself. But that album is just a drop in the overflowing bucket of projects Bottum has been involved with over the last decade.

After Faith No More’s breakup in the late ‘90s, Bottum lived in L.A. from 2000 to 2010, where he scored films like 2009’s What Goes Up with Steve Coogan. Toward the end of that period, the career of simply adding music to other people’s work stopped feeling rewarding. So Bottum moved to New York to fulfill a longtime dream: writing and producing an opera about Sasquatch.

“It’s sort of about a monster in the forest who’s misunderstood and perceived as sort of a villain,” he says. “But at the core of it, he’s kind of a sweet, gentle, thoughtful person. I always liked characters like that.”

The hour-and-a-half-long production was an immense challenge—particularly the month he and his cast spent performing it every night at the 2016 Edinburgh Festival Fringe, in which he assumed the conductor role and played the keyboard. He then wrote another opera called The Ride, only 30 minutes in length; the staging is minimal, consisting of two men on stationary bicycles set to music. The story is a commentary on the generational dichotomy between how older and younger gay men deal with AIDS (given the substantial medical advancements that have happened since the ‘80s) and it takes place during the AIDS/LifeCycle Ride, an annual, 500-mile charity bike ride that Bottum has participated in.

His foray into theatrics didn’t end there. Last year, Bottum had a prominent acting role in the Sebastian Silva film Tyrel, which also starred Jason Mitchell, Michael Cera, Caleb Landry Jones, and others. It was the first time he had ever acted in a professional setting, and he relished the air of importance that comes with the form. “You don’t get much higher on the food chain than an actor or actress,” he jokes. “So it was kind of a weird ego thing. I had a lot of fun with [it].”

Bottum also found time to join two new bands, as well as revisit an old one. In 2016, he joined the New York group Nastie Band, which he defines as “a super intense art collective.” The project was started by visual artist Frank Haines, who Bottum says is its spiritual leader. The band itself contains a pair of identical twins, a guitarist, a drummer, Bottum on keys, with 85-year-old noise pioneer Chris Kachulis on the mic. “It’s super loud and super intense and it’s a big noise collage of sound,” Bottum says. “But over the top of the music is the singer, Chris Kachulis. And he sings ballads from the ‘50s over the noise.”

Last month, Nastie Band released their first single—an eight-minute drone creeper called “Shapeshift”—along with 10 different reinterpretations of the same song, which were made by members of the band using pseudonyms, along with some of their friends. A month after the release of their debut album in late July, Bottum will be hitting the studio with another new band he formed called Crickets (featuring JD Samson of Le Tigre and MEN). They haven’t released any music yet, but from Bottum’s description, it sounds like the polar opposite of what he’s doing in Nastie Band. “When we write and create stuff, we try to really strip away anything that we find excessive,” he says. “It’s really simple instrumentation. There’s a drum machine, a synthesizer, and a guitar. And we try and create a lot of space in what we do.”

Among the myriad projects he’s been involved with since joining Faith No More in 1980—many of which are only getting weirder and more experimental as he ages—Bottum says indie pop group Imperial Teen has provided a space for joy and relief in his life. He and his bandmates—vocalist/guitarist Will Schwartz, drummer Lynn Truell, and bassist Jone Stebbins—formed the band in the mid ’90s and released albums at a decent clip for a several years. Over time, their output became more sporadic; their latest, Now We Are Timeless, is their first in seven years.

The record is sleek and hooky, with an icy sheen. The band’s quadruple harmonies are mixed evenly, and their voices swim and slide between one another like koi fish. All four members are experienced musical vets, so even though the songs are easily digestible pop-rock cuts (especially compared to Bottum’s other projects), they have the effortless quality that comes with years of creative bonding—despite the fact that all of the band members live in different parts of the country. “We’re super good friends, and more than anything just an opportunity for us to be together and share things. I’ve been in bands before that are challenging, personality-wise and circumstantially and difficult to get stuff done. Not Imperial Teen.”

The record’s thematic throughline is a little less cheery. “It’s veiled as a presentation of where the world is today, which is kind of a scary place,” Bottum says. “And I don’t know, we always work well with dichotomies—not irony, I hate to say irony. But dichotomies. The cover of the record is a glacier and the title is Now We Are Timeless, which doesn’t make sense. ‘Cause we all know that the glaciers are melting, and we’re all being destroyed.”

The music that Bottum’s been listening to lately is more aligned with the chaos of the world around us—from found-sound noise, to pulsating breakcore, to rediscovering an old band and realizing some things are in fact timeless. Bottum talked us through some of his recent favorites on Bandcamp.

That’s kind of my jam. I started seeing that band live. I really like them live, they have a crazy show that really kind of gives me faith in live music. And in a live setting they really excel and it’s so exciting to see young people enthused in that way. I started seeing them live a lot and then just gravitated to that record, I love that record.

I was introduced to Machine Girl by my friends who are in a band called Kill Alters. They play often with Machine Girl, and Nicos from Kill Alters [co-mixed] the last Machine Girl record [with Matthew Stephenson]. And Bonnie [Baxter], who is the singer of Kill Alters, she played the woman lead in my Sasquatch opera. So it kind of all ties together. And they have some records on Bandcamp that I like called Archives [Vol. 1, Vol. 2, Vol. 3, Vol. 4] and they’re kind of, like, weird snippets of what they’ve done over the past couple years that shouldn’t make sense in a chronological or thematic way, but it really does. I love the sounds they get and I love where they go. They have an awesome drummer, too, who also just played a show that Nastie Band played.

Bonnie Baxter (Kill Alters) has her own solo record, and she performs solo a lot and with the guy from Machine Girl. They do a duo sort of thing. She’s a crazy talent, and super smart and weird and in your face and emotional. Kind of really… frenetic beats that happen really fast with a lot of effects. And a lot of times just indecipherable vocals, but you can kind of catch snippets. And weird sound bites that come from samples that she’s made: her mom sometimes, stuff from, I think, around the house. But mostly she plays the drum machine really well. And most of it is based around highly-charged, super distorted, fucked-up drum machine beats.

Liam Benzvi
“Front to Back”

He’s a really great songwriter, and he’s playing with Imperial Teen when we play our show in July in New York. I just saw him for the first time in Los Angeles a couple months ago and I just really liked him. He’s got a really strong personality and [it] felt almost like a Michael Jackson sort of vibe—without all the dirty baggage. Really strong songs and a really fun personality that made me feel really good. I saw him during the summer and it just felt really nice.

Team Dresch
“Your Hands My Pockets”

They were sort of a queer band from Oregon and kind of came out before Sleater-Kinney, they were pre-Sleater-Kinney, but right before. But they were super real and wrote really, really awesome songs. Their whole catalog is on Bandcamp, which is exciting to me. And it’s really fun to listen back to. And they have a new song that’s called “Your Hands My Pockets” that’s really nice, they’re just starting a tour right now. Bandcamp, for me, was neat in that way, to go back and sort of revisit stuff that I loved before. I recently had a fire and I lost most of my records but it’s a really cool thing to have, like, “Oh, there it is, there’s those songs.”

I chose, in an egotistical way, our Shapeshift RMXXXD record, which kind of blows me away. It’s fun that I have that music on a platform that I can listen to. There’s so many different versions of the song and every person in the band did a different version. So it’s sort of a way of tuning into the different people in the band through their different remixes.

Muddguts is this record label in New York that I really love, my friend Mark runs it. They’re super awesome and they put out two records that I really like. One is a band called Twompsax. It’s a trans skater person that’s in the band. Her name is Cher Strawberry and she’s a professional skateboarder and has a band.

They’re kind of getting a big name but they put out a song on the Muddguts label that’s also on Bandcamp called “Billy” that I like a whole lot. And [Surfbort and Twompsax] are playing with Crickets at [Brooklyn venue] Baby’s All Right in July. Surfbort are sort of like crazy, trashy, hillbilly ZZ Top with a woman singer. But really loud and in your face and they’re really fun live. Super theatrical and dressy-uppy and kind of hilarious.