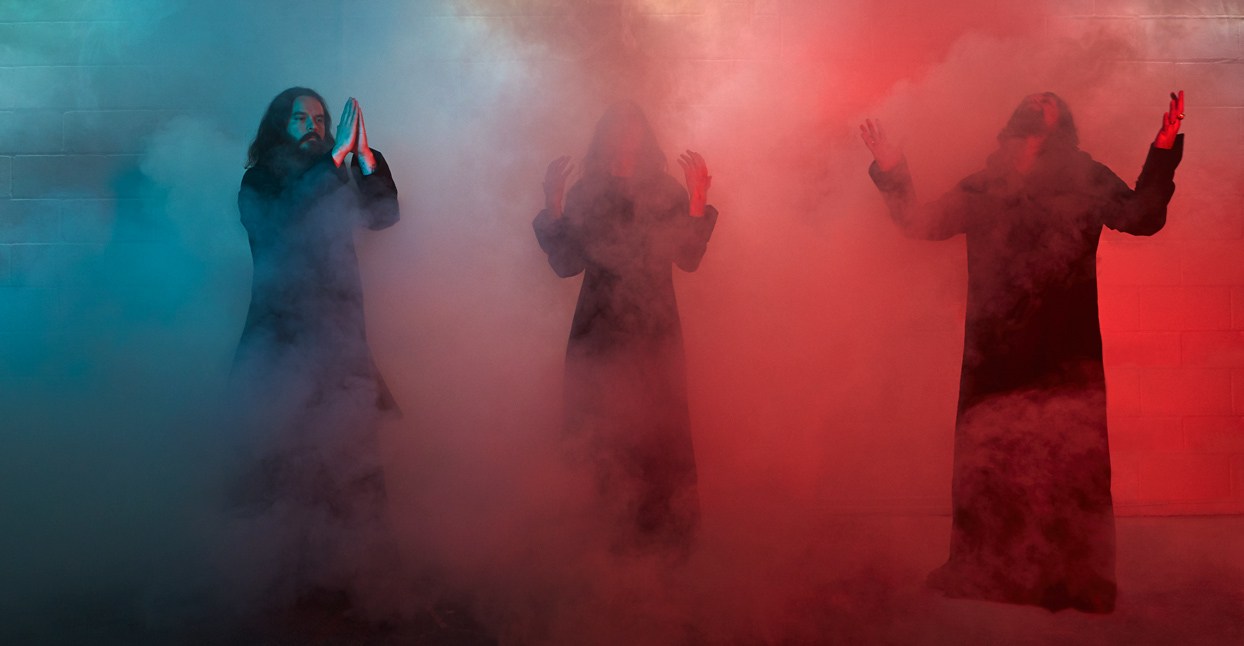 Over the course of Sunn O)))’s two-decade-long career, the group has managed to find a lot of space within space. Core members Greg Anderson and Stephen O’Malley have become infamous for their lumbering approach to modern classical, black metal, and noise—or to put it in layman’s terms, for stretching out every last, hulking riff for as long as possible.

But the duo’s latest record, Life Metal, is a bit of an outlier. Produced by noise rock icon Steve Albini, it finds Sunn O))) instilling their famously-foreboding dronescapes with more warmth and clarity. “You can hear every single amplifier if you focus on it,” O’Malley says. “There are a lot of other frequencies in the music that haven’t come across as clearly before, especially in the high frequencies. That gives a real vibrancy to the proceedings.”

Anderson and O’Malley are metal dudes first and foremost, though, as evidenced by the cvlt shout-outs scattered throughout the record. The first thing the listener hears is a sample of Bathory’s “Odens Ride Over Nordland,” the iconic intro to one of black metal’s genre-defining albums, Blood Fire Death (a ballsy first impression, to say the least). The title track also contains an Easter egg; it’s named for a diss ascribed to Swedish death metal legends Entombed when they signed with Columbia, which they discovered hanging out with ex-Entombed member Nicke Andersson.

“[Metal’s] a huge part of our DNA—it’s where Stephen and I came from,” explains Anderson. “Obviously, putting the Bathory intro was a calculated move, but it’s natural for us: that is the core of what we do.”

“Contemporary art often references historical art objects and other art within its composition, so it’s a little like that too,” O’Malley adds.

Life Metal is a Sunn O))) record, therefore it’s still heavy. But Anderson points out that it’s far from doom in mood, owing to the sound they created in Albini’s space: “The tones of the instruments and the overall aesthetic coming out of the music, to me, had a much more uplifting—like a blinding brightness to it.”

Ahead of their latest, we asked Anderson and O’Malley to pick some of their favorite Bandcamp releases. Their selections prove emblematic of Sunn O)))’s dynamic: Anderson’s all about metal and punk, while O’Malley’s partial to experimental music. Here’s what they’ve been listening to lately.

This recently broken-up New York band take an aggressive, confounding approach to math rock. “What I liked about them was they reminded me of Slint, who are one of my favorite bands,” Anderson says. “They had this really interesting angle that I had never heard before—this solemn, dark vibe—and the vocals were sometimes spoken, but the music seemed to be rooted in punk rock. I mail-ordered the vinyl from their Bandcamp page.”

Speaking of Slint, Anderson also selected a solo record from that band’s guitarist David Pajo (also known as Papa M) who’s also set to support Sunn O))) on their upcoming U.S. tour. “There’s this really fragile beauty to what he’s playing. He’s basically a master of playing quiet, which is a really difficult thing to do,” Anderson says. “All my life, most of the stuff I’ve been drawn to and listened to has been played loud. When you hear somebody that can pull off playing quiet and write these things that are as dark and heavy as anything that would be, that’s extremely unique.”

Crust punk with a metal edge: “I’m not that familiar with the scene they fall into, kinda goth…it reminds of me of Tragedy and a little bit of Neurosis,” Anderson says. “I think it’s the Killing Joke influence. Around the States, there seems to be a scene of these bands (Arctic Flowers from Portland, for example) coming out of the hardcore, punk, and crust scenes, who are also making bands into this kind of [goth] music as well.”

Anderson just signed this Massachusetts thrash group—heavily influenced by the epic stylings of Iron Age—to Southern Lord. “It reminds me of a really great time of ’80s thrash like Mercyful Fate and early Slayer and Exodus and stuff like that. They’re killer.”

“I actually played a solo show in Paris a couple years ago and the promoter put them on the bill,” O’Malley says. “At first, I thought it was a joke because of their name. I was blown away by their set: it was kinda like a version of Neu! that stopped in the first phrase of the first riffs. When they play live, they play—for about an hour—the same phrase with very slight rhythmic modulation, and it’s really powerful as trance music. This record [Pau], and all of their records, they’re all the same part, but they’re just different recordings in different spaces—and they sound different! It’s a very interesting way to study how trance music works, really.”

Another gem from France’s experimental hurdy gurdy underground, with a more traditional but no less mind-melding approach. “La Tène is another example of this cyclic, repetitive trance music, but it’s mainly acoustic instrumentation which I think is really interesting. You don’t often hear that as new music,” O’Malley says.

This is a mixture of drone and field recordings from another French composer. “I’ve taken this chance to show a lot of French underground music on Bandcamp,” O’Malley says. “He’s also a personal friend of mine, but that’s not why I chose it. He’s making really interesting long-piece music; it’s experimental music but it also has flavor and character and a cinematic feeling to it.”