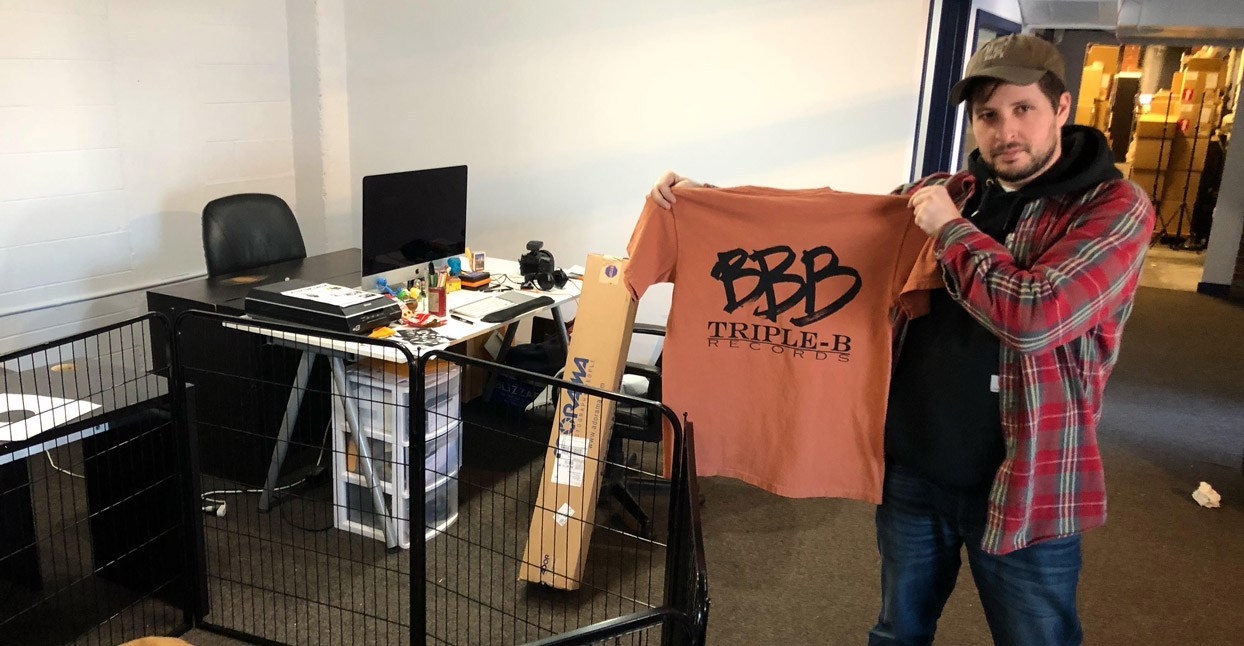 There were two albums that introduced Sam Yarmuth to hardcore: Bane’s Give Blood and Converge’s Jane Doe. And there couldn’t be a better representation of the intermingling dichotomies of his label, Triple B Records, than those two quintessential releases.

Although Bane was formed as a side project by then-Converge guitarist Aaron Dalbec, and Give Blood and Jane Doe were released just two months apart from one another on the same label (Equal Vision Records), their respective sounds were worlds apart by the hardcore measurements of 2001. Bane’s rugged and yelly melodic hardcore anthems were embraced by stagedivers worldwide. But those were rarely the same kids who’d be head-walking and swinging dangerously to Converge’s violent breed of punky metalcore. It took a couple decades for hardcore’s pointlessly rigid factions to come together and universally accept the diversity within the idiom. And the roster Yarmuth has assembled through Triple B Records has been instrumental in bridging that divide.

If you’ve paid even the slightest mind to hardcore throughout the past decade, then you’ve probably heard a band Triple B has worked with. They’re responsible for launching Fury, Freedom, Forced Order, Candy, The Rival Mob, Fire & Ice, One Step Closer, Abuse of Power, Magnitude, Ecostrike, Mindforce, and Rude Awakening. They’ve put out projects from vets like Have Heart, Terror, Self Defense Family, and even Yarmuth’s heroes in Bane. And their excellent three-volume America’s Hardcore Compilation series has featured nearly every crucial inclusion in this generation’s lexicon: Turnstile, Power Trip, Title Fight, Backtrack, Suburban Scum, Rotting Out, Cruel Hand, Foundation, and even Ringworm.

At over 100 releases and counting, the Triple B catalog spans NYHC, crossover, melodic hardcore, beatdown, post-hardcore, youth crew-core, and bands that play death metal with hardcore energy. There’s even some indie-pop, pop-punk, and hip-hop sprinkled in there as well. Yarmuth, now 31, started the label in high school with the intention of putting out projects that he likes and from people he’s friends with; the goal has never changed. His criteria is important but it purposefully yields a broad result: no rock star attitudes, must have an appreciation for hardcore, and a respect for the familial nature of the label.

“I like a wide range of music and with that, I want to work with a lot of different bands,” he explains over email. “I don’t want to be pigeonholed into being just a ‘democore label’ or a ‘beatdown label’ or anything like that. I think that gap is kinda closing in. Seeing dudes rocking Three Knee Deep shirts going off to One Step Closer is a great feeling.”

Wherever the middle ground is between those two bands—ignorant beatdown and fist-pumping melodic hardcore, respectively—is where Triple B resides. Yarmuth’s description on the label’s Bandcamp page says it best: “Too hardcore for smartphone punks. Too punk for clap mosh losers.” He relishes being an umbrella that may throw purists off, and he’s savvy at finding outstanding gems throughout myriad overstuffed subgenres.

“Bands, lyrically, have to have something to say,” he says. “Any doofus can sing about being stabbed in the back by someone. That’s boring.”

However, in choosing releases for the label, he prioritizes his own instincts over what’s posited as “hype” or conventionally fitting. “I’ve signed bands just after seeing them live. Not even hearing them recorded. Unified Right is the best example of this. Saw them randomly in Tampa at one of their first shows. I hadn’t even heard of them before. But after they played to, like, 15 people, I knew they had to be on the label.”

Yarmuth, who says he currently lives out of a duffle bag between Boston, Orlando, and Brooklyn, is the only full-time employee at Triple B. His sister recently started doing the label’s accounting and fellow Boston indie Run For Cover Records handles his mail order. Otherwise, it’s all him and it only became his full-time gig last April. “I don’t take a paycheck but the label does pay my cell phone, internet, and cable bills. Sometimes it buys me chicken wings, too.”

Although he responds with a hearty “Fuck no” when asked if the particularly rampant output of late will continue, Yarmuth promises more “indie/poppy bands” coming to the label in 2020. He also has plans to release projects from two of his own bands, Antagonize and Clear, in the near future.

There are enough albums in the Triple B catalog to keep any punk busy for a year, but we asked Yarmuth to share what he’s been listening to outside of his own label’s multiverse. In what comes as no surprise, his six recent favorites on Bandcamp cover a ton of ground.

“I found out about this band very late to the game. My good friend Natasha [Parish, of Ground Control Touring] is their booking agent, and I saw her post about them a few times. Finally checked it out and I’m kicking myself for sleeping. It’s dark synth-pop goth shit that really hits the spot for me. I’ve never done a record for a band like this; I’d love to drop a single for them someday.”

Death Bells
Standing At The Edge of the World

“Another band I hope to add to the BBB roster one day. This is another group booked by the homie Natasha. Australian but a few of the guys live in L.A.? I met Remy at Sound and Fury and he’s a legit badass dude. I love the band, and I love their last LP a lot. Enough said.”

Result of Choice
Place of My Dreams

“One of my favorite current hardcore bands who aren’t on BBB (I wish they were—shout-out to Marco from Advanced Perspective) just dropped a new badass 7″. It’s a real ‘members-of’ band from South Florida that’s taking over the hardcore scene. They rocked AHC last year and are rocking it again this year. Plus, they covered Beyond on their promo: that’s a real deal sealer for me.”

Glitterer
Looking Through The Shades

“My old homie Ned [Russin, of Title Fight] and his new one-man band just dropped an awesome LP on ANTI-. It’s been on constant repeat in my house. My roomie and best friend Chris Tharp directed all the music videos for this record so far also. It’s a real gem all around for me.”

“Innumerable Forms dropped an insane LP called Punishment In Flesh last summer that has been on constant rotation for me—featuring Justin ‘DFJ’ DeTore, the dark prince of straight edge! DFJ is a man of many talents in terms of alternative music. Everything the dude touches is gold, and this is no exception.”

“This right here is real-deal powerviolence, featuring members of Clear, The Rival Mob, Wolf Whistle, Antagonize, etc. They’ve dropped a few EPs, an LP, and a split with Regional Justice Center. All are badass.”