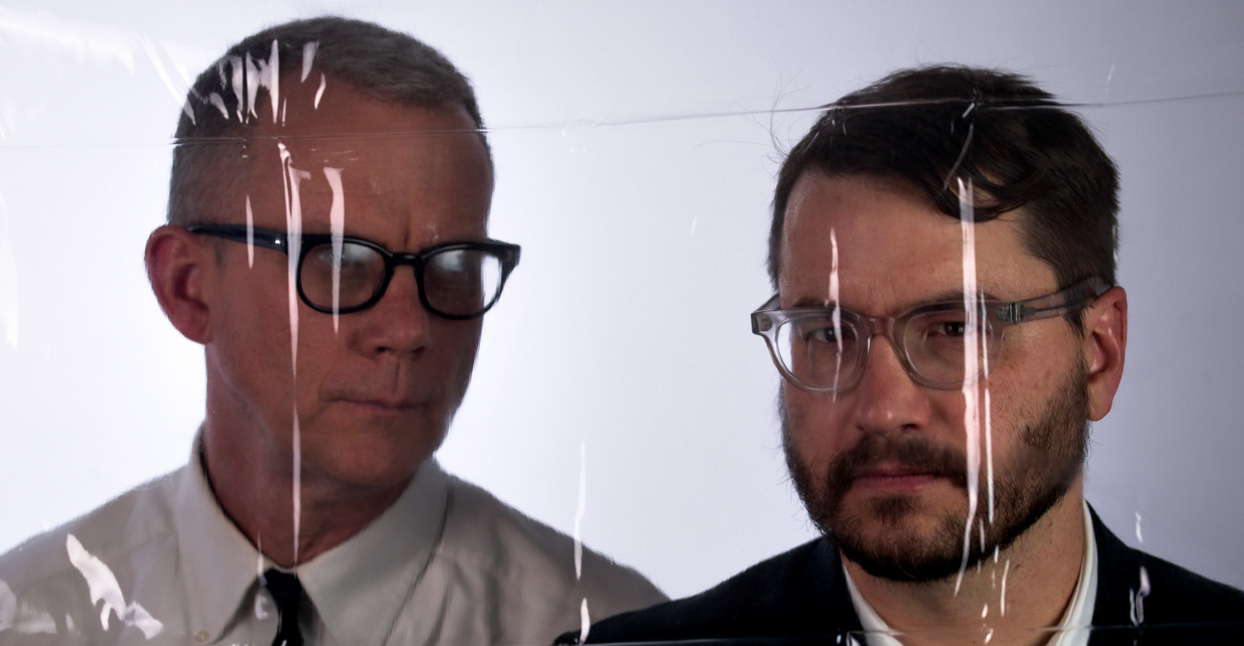 Matmos, the Baltimore-based experimental duo of M.C. Schmidt and Drew Daniel, have been making music sourced from interesting and often random materials for the past two decades. A Whirlpool washing machine, sounds recorded during medical procedures, recordings of a rat cage played with a bow—you name it, they’ve done it.

Their latest, Plastic Anniversary—released in March via Thrill Jockey—is composed purely from sounds made by plastic objects: a police riot shield, a “crying” pill (showcased on the album cover), an exercise ball, shards of broken records, a child’s whirligig toy, and countless others. The resulting 11 tracks on Plastic Anniversary are as delightful as they are unsettling; the playful, bouncing rhythms of “Silicone Gel Implant” are intentionally juxtaposed with the aggressive and suggestive bangs and scrapes of “Thermoplastic Riot Shield,” as Matmos muse on plastic, its role and use, its environmental and social impact. Plastic Anniversary is both scary and fun, and provides a new perspective on our current bizarre historical moment.

To celebrate the release, we asked Matmos member Drew Daniel to share some of his favorite Bandcamp releases with us. His selection of “things that I have purchased on Bandcamp that I think you should check out too” is listed below, in no particular order. It includes a 90-minute field recording, a typewriter orchestra, “a mood stabilizer,” and more.

“William Basinski hipped me to this album and I am fucking grateful, because it’s amazing. The first time I played it for Martin [M.C. Schmidt] he was actually quite startled. This is really what you think it is: a typing pool as rhythmic ensemble. No hunt and peck here, these folks really thwack that return and punch down hard on home row. This whole label is tight too, by the way.”

“Geo Rip is John Jones, a former member of Dope Body, and two other folks—Aaron [Leitko] and Mike [Petillo] from Protect-U—and they come together beautifully on this record. This is a suite of weirdly askew rhythmic pinwheels and tracky-yet-flowing contraptions that straddle no-kidding dancefloor functionality (I played this at an actual honest-to-god dance party and people went off) with a tangy, odd, and off-kilter mutant factor that eludes easy description. I would expect great things from this crew.”

“I don’t honestly remember how I stumbled onto this crust band from Hamilton, New Zealand but they are fucking awesome. If you like raging and screaming and laughing at what a horrible world this is, then you need to hear this album. I would say the anthem here is ‘Too Many Churches,’ despite its long intro. This band rips and all their records are great, but this is the masterpiece, and I would certainly never know about them without Bandcamp.”

Jeremy Hegge
Dawn To Morning In A Dry River Bed

“This field recording is over one hour and 30 minutes long, and is continuous, and is offered as a ‘name your price’ release—a fitting strategy for something that is so much less and so much more than most albums at the same time. You hear a dawn chorus of South African insects and birds—natural change over time, the planet shifting ever so slightly as a river greets the sun. Lovely.”

“I feel like people who are Bandcamp heads already know about this, but it’s one of the most useful purchases I have made on this site, and so I really must give this one some love. What you have here is 19 minutes and 56 seconds of rumbling, bassy, non-interesting, but soothingly continuous ambience from, yes, Star Trek: The Next Generation. You can stack it in a playlist over and over for hours, and then put it on unobtrusively as you write or work or do whatever needs doing. The audio just puts a little tint in the room that suggests that you’re about to bump into Data or play a trick on Wesley Crusher. It scares me a little how effective this is as a mood stabilizer, because I just didn’t think that I was a Star Trek geek at all. Regardless, this track is perfect for inducing a focused, docile yet productive kind of calm.”

“What can I say? This upstanding citizen of Maine is a living treasure of American idiomatic noise improvisation, and his real-time scrambling of voice, tape, electronics, and an amplified table of weirdly nailed-down objects is both precise and hilarious live. But he’s also someone whose wild-ass recordings hold up on their own without the anchor of his shamanic stage presence. A case in point is this album, which is one of the wilder in a catalog that goes about as far out as anyone’s I can think of.”