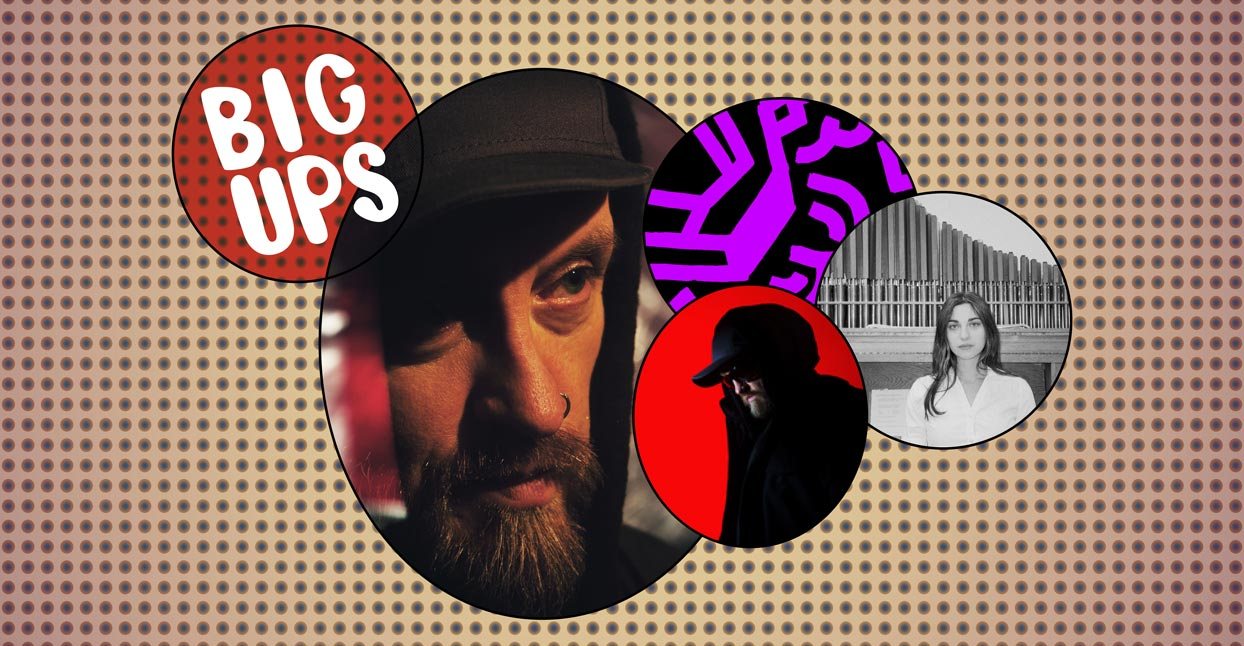 Over the past 30 years, Kevin Richard Martin has built a diverse musical resume that’s still constantly evolving. In the late ‘80s and ‘90s, the British musician explored a vast array of genre-warping experiments in projects like GOD, Techno Animal, and Ice, yet it was in the ‘00s that Martin’s solo alias, The Bug, would surpass them all in influence and impact.

By the time 2003’s Pressure rolled around, Martin had established a trademark sound for The Bug:  a bombastic mix of Caribbean riddims, grime swagger, and skull-cracking sonic filth. Through 2008’s London Zoo, 2014’s Angels & Devils, and a handful of singles and EPs,  Martin also built a collaborator list that any producer would die for: Death Grips, Danny Brown, Earth’s Dylan Carlson, and a who’s who of grime and dancehall MCs featured on releases. However, 2019 has seen the musical visionary shift his focus away from his best-known moniker.

In May of this year, Martin released Sirens under his birth name. It’s a performance piece-turned-album that was initially conceived as a tribute to his son and wife’s strength in the face of life-threatening health complications. “It was a really special piece,” says Martin of Sirens’s original performance. “When I walked off stage, my wife was at the side of the stage crying.”

Martin also produced an EP, released right on the heels of Sirens, for dancehall singer Miss Red (“She’s funky as fuck in her delivery and fly as hell,” says Martin); he reinvented his King Midas Sound group to focus on “the most intensely harrowing, disconcerting poetry we [could] possibly summon up”; and introduced Zonal, a new project with frequent collaborator Justin Broadrick (Godflesh, Jesu). “Perversely, we liked the idea of a non-guitar record through Relapse,” says Martin. “It’s as intense and heavy as any metal album can be, but it certainly isn’t a traditional metal record.” Martin also recently launched his own label, Pressure, and has two Bug LPs planned. “One is probably exactly what people would expect and want from a Bug record, and the other is surprising,” he says of the pair.

Somehow, despite his prolific creative schedule, Martin is also constantly discovering and consuming loads of new music. “I am hungry for music,” he says. “Anyone who knows me will see that I’m tirelessly promoting and needing new music to inspire me because I’m competitive with sound. When I hear good shit, it makes me want to work harder. It helps me know that I’m not alone out there.”

We asked Martin for some albums that he’s been digging on Bandcamp, and he responded with 10 releases, broken into four categories.

I think he’s the first Kenyan producer I’ve come across, but what’s so inspiring is when I heard his releases, it didn’t sound like it necessarily had to come from Kenya at all. It could’ve come from anyone obsessed with beats, tones, and textures, and just done in a very hyper-intense manner. It’s just that mixture of funk and noise that I love. It’s fresh, forward-thinking, and forward-moving. Tip of the hat to him. It’s bangin’.

My wife is Japanese, and she and I were talking about him yesterday because he has a new album on the way. He seems to exist in a very hard-to-find void. It’s hard to find interviews with him, even for my wife in Japanese. He seems to have made quite a lot of music, and I’ve only discovered that music via Bandcamp, and nowhere else. It’s been a joy to find it because he joins the dots between early DJ Krush, Scorn, and even Burial as far as I’m concerned. It’s a very classy approach to sound design with heavy atmospheres and [it’s] just slow as fuck. That combination of elements is a joy for me because they’re things that I hold really dear.

Yabby You Meets King Tubby
The Walls of Jerusalem

I’m very fortunate that Pete Holdsworth, who runs the Pressure Sounds label, has become a friend of mine over the years. It’s the finest reissue label for reggae there is as far as I’m concerned. There are labels that are run out of absolute passion of a genre, island, mentality, and sound. It’s been a joy to follow Pressure Sounds’ reissues, because it’s educational in the best sense. It’s just like, ‘Fuck, what’s this?’ The Yabby You [album] is exactly that, case in point. It’s just a joy for him to have dug up extra recordings that I’d never heard before next to classic recordings. Yabby You himself was just such a genius singer and producer and unusual dude in his thinking and approaches to music. And just combining with King Tubby who’s one of my favorite producers of all time, the record does absolute justice to both.

BIG|BRAVE
A Gaze Among Them

I remember when I first heard them, just being blown away by this mixture of the thuggishness of early Swans, yet with a vocalist that reminds me of Bjork. Early Swans were a huge inspiration on my first band, GOD, and continued for a long time to be a huge inspiration on me, so I’m always interested to see other artists who use Swans’ template as a foundation to move from. I think Big|Brave take it and make it something fresh. I have this strange relationship with metal. Often I want to like metal, but I find it hard to find the metal music that actually ticks the boxes that I like. Big|Brave don’t have bad vocals, bad theatrics, cliché formula, bad guitar solos (laughs).

They remind me a lot of the roots that I really liked such as Killing Joke, or that I worked with like Terminal Cheesecake. It’s that heavy guitar music mixed with dub technology, psychedelia, and intensity. Rock music hasn’t been something that’s grabbed me so much in the last few years, really. When I heard them it recreated an interest for me, and reminded me nostalgically of a time when a lot of guitar-manglers were coming to the U.K., because when I was living in London, I saw very early shows by Swans, Butthole Surfers, Sonic Youth, and I loved how they all just mashed up guitar music, yet were forward-thinking. I think a large problem with a lot of guitar music for me is it sounds too familiar. DEAFKIDS has that rooting in music I know, but they seem to be taking it somewhere fresh.

I was immediately smitten by this album because it sounds sacred and ambient at the same time. It’s like psychedelic church music to me. She has the hushed minimal tones that I’m very fond of. I regularly oscillate between maximum or minimal in my tastes, between ugly or beautiful in my tastes. Extremes appeal to me, artistically and sonically. When you enter that record, it’s like entering her chamber and her sound, and that’s so hard to do, for an artist to have a sound to call their own and a home to call their own that they created themselves. I’m very impressed.

I discovered them totally by chance, just walking into a show where they were supporting Big|Brave this year, and I was completely blown away. What they did live sounded to me like a cross between The Necks and early Einstürzende Neubauten, and I’m a big fan of both. I read that they specifically wanted to shift their sound totally, and that they been listening a lot to Jóhann Jóhannsson and Neubauten, and they wanted that sense of tension. That’s very much how the show and [their recorded music] are: tense as fuck.

I thought The Weeknd’s [early] music, produced by Jeremy Rose, was very fresh. I liked the mood. It was melancholy and almost, even though it was done with synths, had that shoegaze drone to it. I felt the same when I heard this CY AN release and I felt the same when I heard early FKA twigs. I felt it had really unusual elements, and when I read this guy was FKA twigs’s producer, it made me go and search out this release. And the release is amazing: the tone of it, the mood of it, the atmosphere, the emotion. It’s so well crafted.

I think Alien Observer was the first album that I heard from Liz, which took my head off. I saw her play live not long after that. She supported Michael Gira of Swans. He was playing solo and it was at a venue in London called Café Oto where she played on the floor cross-legged and so quietly; it was insane. It was one of the quietest shows I’ve ever heard, but it just made you listen more deeply and concentrate more thoroughly. This Nivhek album, I’m not sure why she chose to do it under a different name because it still feels very connected to her normal output, but the narrative’s probably very different and there are less vocals and more unpredictable twists in the tale of this record. But still, it’s like classic Grouper to me. It’s got that mood of almost sacred, devotional minimalism, which I find very appealing. And it’s melancholy. I’m very drawn to the color blue in music.

I played Unsound Festival in Adelaide, Australia on the same bill as them. The show just blew me away. The mood of it reminded me of A.R. Kane or My Bloody Valentine, bands I had been a fan of when I first moved to London, yet it was a bit more swoony than that. There are almost elements of Sade on one side, and almost something like early Weeknd on the other, just very liquid and melancholy. The joy of music for me is discovery and finding soulmates and finding inspiration. Sharing that bill with HTRK was a very pleasant surprise.