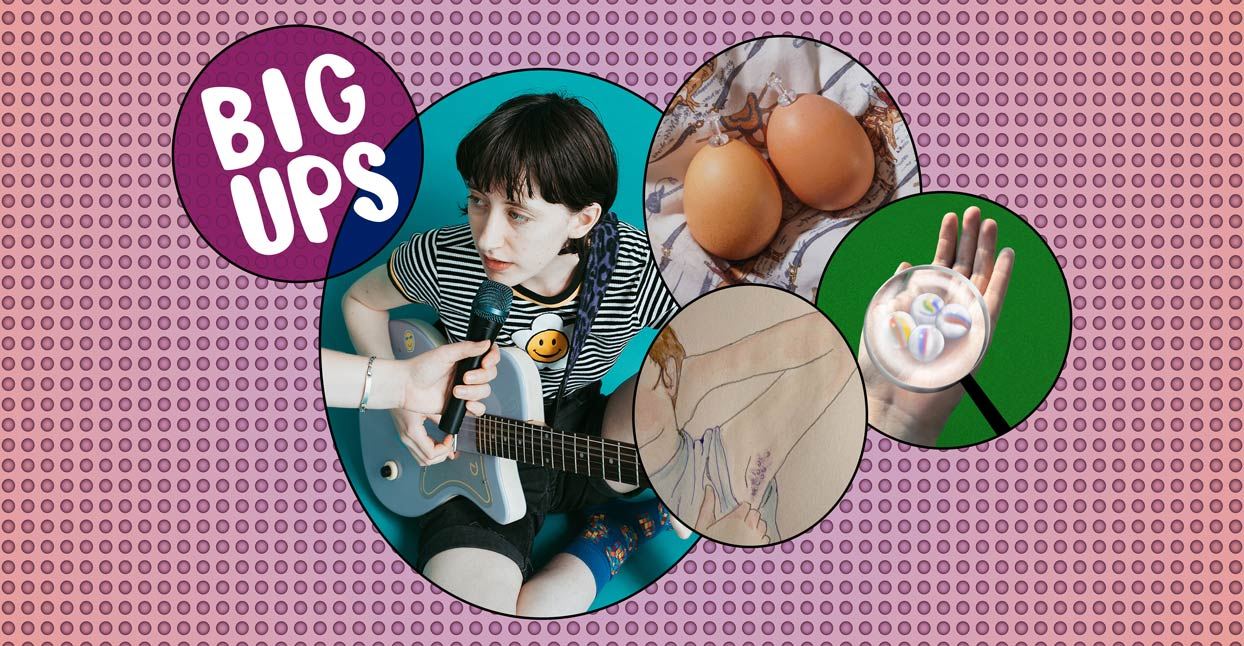 Greta Kline has something to say about “lo-fi” music.

“I think lo-fi recordings in general, mine included, require some patience in order to actually appreciate,” she says. “You have to be able to get past it not being the highest quality.”

Kline’s choices for her installment of our Big Ups series fall squarely into the experimental, intimate DIY world of lo-fi pop music from whence her own Frankie Cosmos project sprung about six years ago.

“There’s so much music that you’re never going to hear if you don’t have that patience,” she continues. “There’s so many great artists that don’t know how to make a recording that would be considered ‘higher quality.’ It’s worth it to find those artists and listen to them. I want to say that, because I get a lot of kids asking me, ‘What do you suggest? How much should I save up to make a studio album?’ You don’t have to do that.”

Kline would know. Though she’s only 25, the Frankie Cosmos frontwoman is considered something of an elder stateswoman, if not an outright pioneer, in today’s “bedroom pop” scene—a constellation of artists loosely linked by their intimate songwriting and holistic, totally independent approach to creating and distributing music. Kline famously got her start uploading tracks to Bandcamp while scrambling around as a teenager in New York’s fertile DIY scene, and she remains committed to that punk ethos even though Frankie Cosmos itself is now a proper band signed to Sub Pop. Kline will be the first to admit that the transition from bedroom to studio wasn’t without its challenges.

“For a while when I first started [recording in a studio], I was like ‘Now, we’re making quote-unquote real albums. But you internally decide whether your album is a real album or not,” Kline says. “Obviously when you’re on a record label and you have resources and other people who want to help you sell the music, you want to make sure it sells the best it can. It’s definitely a decision.” But while she may be clear-eyed about her step up in the music world, Kline is a DIY kid at heart: “I still make songs that I record only on my computer. It’s not really different. I’m not past that point or something.”

But Frankie Cosmos is definitely a band these days, and when it comes to their new record, Close It Quietly, Kline enthusiastically shouts out her bandmates. “I think you can really hear that the contribution that my bandmates make on this on record,” she says. “I always feel that way. I think there is just a lot of trust and love between us, that if we didn’t have that we wouldn’t have been of able to make it like this.”

In that spirit, Kline’s picks are rife with friends and past collaborators, reflecting her roots in the New York’s DIY scene and enduring interest in unearthing unusual, overlooked music and musicians. For Kline, a good song is a good song, no matter how it’s recorded. “Even if artists are making lo-fi music because it’s the only thing they know how to make, I think that the song can still shine through,” she says. “I don’t want to promote the idea that you have to have nice equipment to make something that’s more ‘real,’” she says.”

With that in mind, here are five listening recommendations from Kline.

This band is two sisters from Germany named Joana and Leonie. I met them through the internet. Well, technically I met their dad through the internet. He saw me on YouTube and then through my friend’s public access show. He started e-mailing me and then sent me their Bandcamp link. They ended up becoming some of my best friends, and my first ever tour in Germany was actually with them. They have a very special place in my heart. The music they make is extremely lo-fi and just very pure. I like the feeling it gives me. They’re currently working on a full band album that’s so good, but I really like their old Bandcamp uploads. They’re really special.

Baby Mollusk is Rachel Gordon. She’s from New York, so we kind of knew each other some point as teenagers, but we really met when she was at SUNY Purchase and I would go play shows up there. That’s where I saw my first college shows. I really like this album. I can’t believe this is the last Baby Mollusk release, from 2013. I wonder if they’re still doing music?

Interesting is Alex Bailey, who’s the bassist in Frankie Cosmos. He and I also have another band called Lexie, and he was in the Georgia band Warehouse. He’s a really great songwriter, and he’s been making these instrumental songs and putting them up as he makes them. They’re all so good. It’s really easy to like. I’ve done a couple tracks that are instrumental in the past on my Bandcamp, but I don’t really do that anymore. I feel I mostly write around lyrics. It’s funny when I hear Alex’s music, the Interesting stuff, because I want to write lyrics over it. That’s kind of how Lexie functions. He’ll make something like [Interesting], and I’ll write the vocal part. I can’t help but want to sing over his stuff.

Anna McClellan
Yes and No

Anna’s songwriting is really unique, so is her voice and playing. Everything about Anna’s songs is addicting. One of my favorite tracks on here is ‘Holding on Too Tight.’ It’s a really good one. It has one of those melodies that, if you get it in your head, it just keeps going in this way where you want to sing the whole thing. The lyrics are so good. I worked a little bit on this album with her, I sang some of the back vocals, and when we were working on it I remember fixating on this one lyric: ‘Listen closely / Love you only / Settle my gaze a bit / And maybe I won’t be lonely.’ Something about that is just so good. It really sticks with me.

100% is Z Santos from the band Crying. They used to have a band called Whatever, Dad. I think now they just put up music as 100%. They’re just one of my favorite songwriters and I met them in the same scene as Rachel Gordon from Baby Mollusk. These recordings are just really intimate and amazing. They’re just one of the best singers, and just really take you to a place. Their Bandcamp used to be set in these colors where you couldn’t read it. All the words were the same color as the background, and the only way to read it was to highlight it. It’s not like that any more, luckily. I don’t know if they play shows as 100%. Z will play in other people’s bands and stuff, but I don’t know if they’ve really done a tour as 100% but they should.