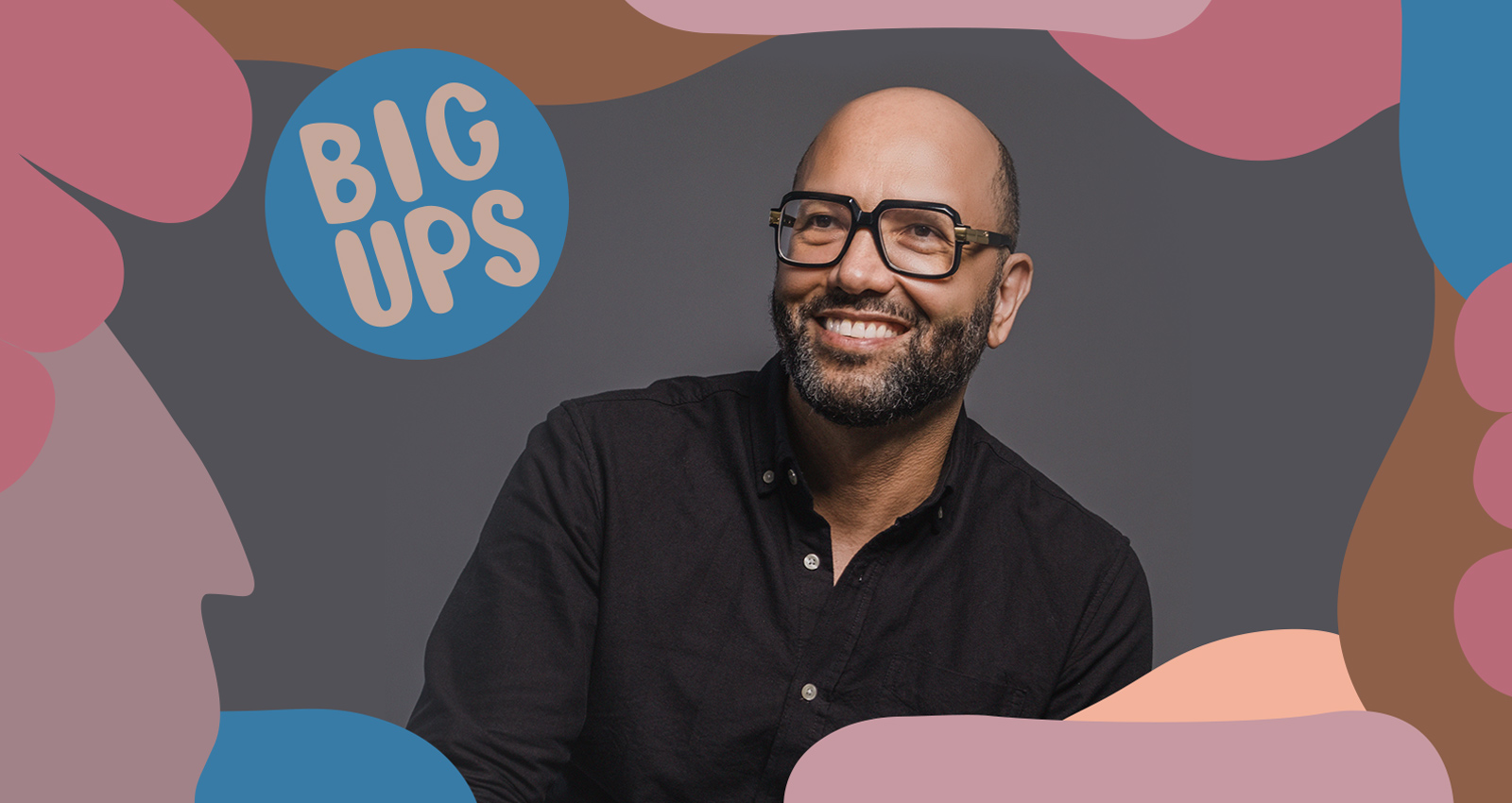 Musician and record executive, Nabil Ayers opens My Life In The Sunshine—a music memoir that wrestles with intricacies of family and race—in a movie theater. Sitting in a theater in L.A. for a screening of the N.W.A. biopic, Straight Outta Compton (2015), Ayers is taken aback when he hears a song that had haunted him for years, Roy Ayers’s “Everybody Loves The Sunshine,” over the opening credits. “My pulse suddenly feels very present in my body,” he writes. “I’m alone in a dark movie theater, three thousand miles from home, feeling skinny, sick, and completely caught off guard by the most famous song by my father, Roy Ayers.” For Nabil, the moment brought questions about his identity, and his estrangement from his father, that had lingered since childhood. My Life In The Sunshine moves from the night in 1970 when Nabil’s mother Louise Braufman first met Roy at the Village Gate nightclub in New York, to ‘90s Seattle where Nabil—in his early 20s at the time—was a firsthand witness to the explosion of grunge. Throughout the memoir, Nabil speaks candidly about the ways his life has been impacted by his father’s absence, and also enthusiastically recalls his time playing in bands, running a record store, and developing a sense of self through music. [Ayers was formerly the General Manager of 4AD, and is currently President of Beggars Group U.S. —ed.]

Toward the book’s conclusion, Nabil takes us along with him as he studies his genealogy, meets family members, and even connects with a woman whose ancestors enslaved his father’s family. In a truly satisfying, full-circle moment, Nabil’s efforts to understand his family history lead him to develop a greater understanding of himself.

We spoke with Nabil about My Life In The Sunshine, and asked him to pick a handful of his favorite releases on Bandcamp.

“On my small label Valley of Search—which is the sort of experimental imprint that I do, I put out a record by Patricia Brennan. I think I was just tooling around, maybe on Twitter, looking at who she follows or who follows her and somehow found this Masma Dream World album. I played it, and just immediately, it was like, ‘What is this?’ It’s really dark and scary and kind of reminds me of a funeral. It’s really heavy. I still haven’t seen her live, even though she lives in Brooklyn, but she’s one of the people that I paid to watch livestreams of during the pandemic. It’s a really intense kind of performance art. She takes it very seriously. She’s really committed. And I think the music is just scary and beautiful.”

“Succumb is this black metal band from San Francisco. I have a huge metal streak in me—mostly from high school. I don’t search it out, but I’m always really happy when I stumble on to something like this that surprises me. Oddly enough, it was one of the members of The National who turned me onto this. It’s really cerebral. Of course it’s heavy, but I think a lot of people associate a certain level of dumbness with heavy music. This is so cerebral and artful and smart and really musical. And it just kind of hits me on all these musical levels.”

“I love my father’s music, and of course we don’t know each other, and there’s all this tension that I talk about in the book. But in the end, that music is really special to me. And it’s always been a part of my life. When I was writing the book, I found myself listening to his music a lot more not just to try to connect with him, but also as a way to try to put myself in certain places—like, when I was writing about seeing him perform when I was seven years old, I had to listen to it to try to get into my little kid head and remember like what it felt like to be there. So, I listened to him way more than usual over the last couple years. This outtakes record has the demo version of ‘Everybody Loves The Sunshine,’ and that will always be the song for me.”

“So, Alan is my uncle, and he is the person who introduced my mother to Roy, because he played with him a couple of times. He’s my father figure in the book. He’s the person who bought me a drum set when I was two-and-a-half years old. There’s a song on this album that’s named after me called ‘Little Nabil’s March.’ I used to play drums, and he would play saxophone, so this is just a record that I feel connected to. With my father’s music, I sort of feel like, ‘Oh, I’m related to that person.’ But with my uncle’s music, I was actually there. I played music with him my whole life. This album came out in 1975, but I reissued it 2018, and he’s had this resurgence since then and has done new music and everything. He’s recording a new album next week, and I’m producing it. So it’s really fun. Also, Cooper Moore, the pianist on this, is my godfather. So it’s a family record.”

“I remember hearing that first self-titled EP when I was in high school and thinking, ‘This is good, this is like a ska band.’ When you’re a high school kid, I guess you think ska is cool. But it didn’t knock me over. But what happened is that my mom and I went to Houston to see some family and friends for Thanksgiving. This is in 1987. I was 15, and I was flipping through the paper, like, ‘I wonder if there’s any bands playing’—because that’s what I would always do in any town. And they were playing, and so my mom and our friend went, and It was so crazy and so chaotic, but also so tight. They were such an amazing band, musically. The singer would just reach his hand out and the trombone would come flying in from across the room and he would grab it, there were people moshing. And this is me living in Salt Lake City at the time, being a biracial kid with a Black father and a white mother. Like, I’ve never seen Black people do this. This is like punk and rock and heavy and crazy. I think that was really the key thing with me with Fishbone. It was like, ‘Oh wow, Black people can do this, too.’”

“This came out like two years ago. I don’t remember how I heard about her, I just love that her voice has this really haunting, stoic, dramatic quality. I think she’s an actress. I love that it’s a short album. I know that sounds strange, but she gets so much done in a short amount of time, and I really admire that. It does exactly what it needs to do, and it’s minimal and sparse and really beautiful. It’s funny, I think this is the second time I’ve said ‘scary’ about an album I picked, but I’ve always liked to be a little bit scared by music. Something about that gets me excited, and this definitely does that.”

“When I was in college it was basically pre-internet, as far as music is concerned. So it was 1992, and I was listening to KUPS, which was the very small college radio station in Tacoma, Washington. I remember hearing a song, and actually picking up the phone and calling KUPS and asking, ‘What is this?’ And it was Drive Like Jehu. They’re from San Diego, some people would call them a ‘post-hardcore’ band. To me, they fit in with Jawbox and Shudder To Think and those Dischord bands—very dissonant guitar music, but also intense and propulsive. I often say that I felt like almost everyone in the band was playing drums, because it’s all so percussive. They have two albums, but this 7-inch is actually my favorite thing they ever did, which is just two killer songs that came out on Merge. I remember seeing them in Seattle on this tour, and there wasn’t really anyone there. They played these two songs second and third in the set, and it was just so intense. It was one of those shows where I was like looking around like, ‘How are there not a thousand people here? This was the best thing that I’ve ever seen. How do people not know about this?’ But they definitely went down as like a big cult band, and they did a tour a few years ago and played Coachella and all that stuff.”

“I mean, I had to throw Seattle in here, because I moved to Tacoma in 1989 to go to college, not knowing that I was going to be in the right place at the right time. My first taste of what was to come was this album. I remember being in my friend’s dorm room and him saying, ‘Have you heard Soundgarden?’ He put this album on, which had just come out on SST—which is also crazy to me, because SST was more of a punk label. And I just remember thinking, ‘Whoa, what? It’s not punk, but it’s not metal. It sort of reminds me of Black Flag, but it also sort of reminds me of Black Sabbath.’ It was one of those things where I was like, ‘I don’t know what this is,’ and I really liked that about it. It’s also kind of a creepy, weird album. It’s not very straight ahead. There’s a lot of strange stuff going on, and I loved that about it.”