From Emily King to Frank McComb, this month’s standout soul releases are an invitation to love and and reflect. Soul doesn’t have to be about love, but these albums put a spin on the genre that’s impossible to resist.

Over three albums and two EPs, New York’s Emily King has become the queen of romance. Her whimsical R&B makes you dream of past loves or finding a new one; her latest release, Scenery, is no different.

Scenery delves elegantly and passionately into the intricacies of love without stumbling into eye-rolling, trite territory. It’s strong from beginning to end, and while everyone will have their favorite tracks, it’s unlikely that you’ll hear one you don’t love. Production, by long-time co-creator Jeremy Most, centers King’s ethereal voice within a unique palette of sounds that sparkles, such as on “Can’t Hold Me” where hints of North African rhythms introduce the empowering song that sees King no longer waiting for a lover who’s repeatedly let her down. Other album standouts include “Forgiveness,” a soft rock meets gospel track with passionate, overwhelming lyrics about unrequited desire. On “2nd Guess,” King’s voice is full of longing and anticipation; midway through, it sounds as if she’s standing under a crescendo of falling stars—perfect for the “we belong together” scene in a rom-com. It’s an intoxicating album that’s sure to be one of 2019’s best.

Based in New England, Blair Leavitt is a singer’s singer with an impressive octave range and a robust style that impossible to deny. Unconditionally is the second EP put out by the vocalist/sax player in the past two months, and here the listener gets a better sense of the soulful fire she possesses.

From title track “Unconditionally,” Leavitt sings with an urgency that runs throughout the EP. Passion, commitment, and enduring love are exemplified on “Where You Go,” complete with its warm flourishes of a jazzy piano. The moving “Unconditionally II” is an example of how special Leavitt’s sound is when it’s slowed down. The ruminating guitar and drums alongside her gospel-tinged vocals is stunning. This is an artist who shows sparks of being an heir to Teena Marie’s soul legacy. That’s a lofty height but if anyone may have the potential to mirror it, Leavitt could possibly be a prime contender.

Rayon Nelson’s voice makes you stand back and exclaim, “wow.” His distinctive tone is rich and emotive with a slight rasp that is simply ear candy. He crafts personal songs that do not try to fit into audience expectations or a particular idea of what “soul” should sound like.

Opener “Memories” is a moving, autobiographical homage to his childhood, but it is his vocals—pure Isley Brothers smoothness—that makes the song so memorable. Another winner is “Thank You,” a song that pays gratitude to a former lover. The track captures the bittersweet experience of celebrating a love affair that is over but has left you better for experiencing it. “Get Up” is a take-no-prisoner, laid-back anthem that shrugs off the idea of perpetual victimhood, as well as the “we are all heroes” cliché that can cheapen such anthems. Yung Solo is a thoughtful and well executed EP by a new, must-hear voice in the soul game.

Acheini is a bit of wild card, so prepare for an adventure on her EP, iSHEBA.

ISHEBA moves quickly from one sound to another, starting from opener “Daniel,” which sounds straight out of the 1960s with its plaintive Afrobeat and old-school reggae vibe. “I Imagine,” a contemporary R&B/soul track, has Acheini singing, “Who am I to complain? You were never mine in the first place.” “LoveStrung” is a sweeping, adult contemporary ballad about desperately wanting to love and be loved. “Waiting for You” is a bluesy acoustic track that is stripped of much production, and closer “Walk Away” is simply a sorrowful stunner.

Acheini’s songwriting is solid throughout. Her lyrics are genuine, in the moment, and raw. There is something deeply refreshing about how she puts it all out there. 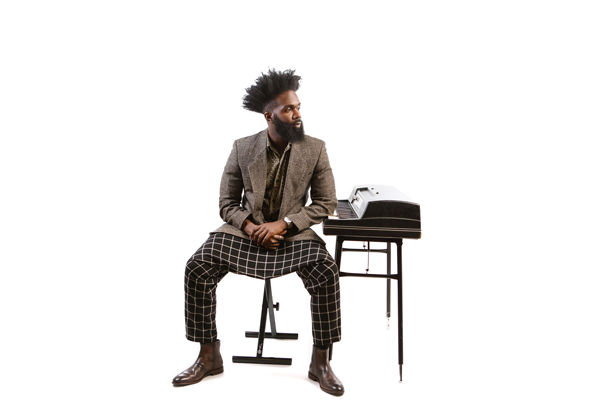 Aaron Abernathy, professionally known as Ab, is adept at delving into the treasure troves of soul, R&B, 1980s Prince, and neo-soul, and drawing out inspiration from less mainstream sounds.

Epilogue marks the final release in the singer/songwriter/producer’s trilogy of albums. The first, Monologue, debuted in 2016, and its follow-up Dialogue in 2017. On Epilogue, Abernathy takes on the massive effort, over 18 tracks, of exploring the many trials and tribulations of romantic relationships. “I wrote this album because too often we move onto the next relationship without working on ourselves,” explains the Washington D.C. musician, “creating a vicious cycle where we continuously walk in relationships unprepared to do our part to create a love that will last.”

The album is written from three perspectives: “HIS” (Abernathy), “HERS” (a woman named Noelle, whose romantic experiences informs particular tracks), and “OURS.” The songs weave between the perspectives, moving from heartbreak to healing. Abernathy’s malleable voice imbues each song with vulnerability and passion, and a good dose of drama. It’s an interesting album by an interesting musician.

Frank McComb’s Intimate Time: The Love Collection is great for those R&B/soul fans who miss the adult contemporary R&B of the mid-’80s and early ‘90s. His is an old-school vibe through and through and he isn’t apologizing for it.

As its title makes clear, the 16-track album is all about candlelight dinners, red roses, and odes to lasting devotion. Its beauty lies in the way that it harkens back to a time in soul when love felt warm and easy. “All my problems ended today / Because your love came and chased them away,” sings McComb on “I’d Be a Fool.” The album is a joyful celebration of love and partnership, and it’s always a good time for that.