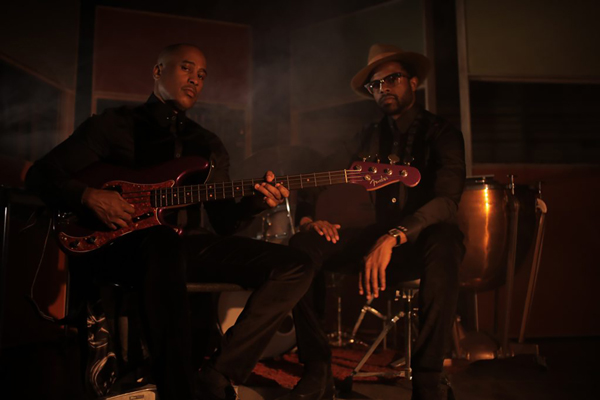 The Midnight Hour is an electrifying outfit comprised of musician/producers Adrian Younge and A Tribe Called Quest’s Ali Shaheed Muhammad (the pair scored the Netflix series Marvel’s Luke Cage). On this live self-titled release, the musicians pay homage to the legendary Harlem Renaissance with the support of a dynamic rhythm section and a lush orchestra. This performance took place in front of a live studio audience at Linear Labs and was recorded to analog tape; it’s a thrilling listen from beginning to end. The pair do something that is not easy, particularly in the shadow of fusion titans like Herbie Hancock and Miles Davis—they make their mix of soul, jazz, and hip-hop sound exuberant and new. The 15-track album will please soulful jazz lovers and convert new ones.

Gabrielle B.
Feel Something

“Everybody is half dead. Everybody avoids everybody. All over the place, in most situations, most all the time. I know, I’m one of those ‘everybodies,’ and to me it is terrible. So, all I’m trying to do all the time is just open people up so they can feel themselves and let themselves be open to somebody else. That is all. That’s it.” Those famous words, spoken by Nina Simone, open Brooklyn artist Gabrielle B.’s new EP, Feel Something.

Kicking off any material with Simone’s wise and illuminating voice is an ambitious undertaking, but Gabrielle B. does it in order to create a space for surrendering to feelings of love, gratitude, pleasure, and recognition. Gabrielle’s voice is lovely, with occasional vocal flourishes that evoke Beyoncé’s signature style; it’s a pleasure to listen to. Each thoughtful track indeed makes you feel something: longing, love, desire. It’s a confident debut by an artist who knows where she comes from and where she’s heading.

Elise Testone
This Is Love

Elise Testone was a finalist on the 11th season of American Idol. The Charleston, South Carolina-based singer-songwriter is now back with This Is Love. If her American Idol run didn’t prove that Testone has an undeniably nuanced and soulful voice, this EP will.

Testone sings with a self-assured sophistication that’s well beyond her years. On opener “Flying High ft. Daru Jones,” she reveals that the practice of self-empowerment can be cool, collected, and peaceful. “I walk with purpose,” she sings, “knowing each step I take is worth it.” This Is Love touches on throwback funk (“Take the Ride ft. Jordan Peters”), country-tinged tearjerkers (“Holly”), and psychedelic rock (“You Never Leave Me”). Testone masters each of these versatile styles effortlessly.

Tony Momrelle
Best Is Yet To Come

It’s often a challenge for background vocalists, even great ones like Tony Momrelle, to find their own path to the front of the stage. But Momrelle, who has performed with iconic artists like Sade, Chaka Khan, Earth, Wind & Fire, Janet Jackson, Gloria Estefan, and Whitney Houston has, and after one listen to Best Is Yet to Come, it’s easy to see why.

The U.K. vocalist and songwriter’s sound is bright and warm, with rich vocals. From the rousing opener “Rising Up” to the Motown-esque “You Got it,” Momrelle grabs listeners and holds us enthralled. Standouts include “We Had Searched for Heaven,” which features guest vocalist Maysa, and “My Paradise,” which has  lush tropical production that sounds live. Best Is Yet To Come is the ideal album for those who crave R&B that bridges the classic with the contemporary.

Spoken word is meant to be experienced live. Poet and artist Janine Lyons’s Epiphany achieves something challenging—it takes her enlightening poetry, places it over percussion and rhythmic beats, and imbues it with that live energy.

Lyons’s voice is deeply expressive, imbued with the power of a natural storyteller. Epiphany is raw, honest, and brutal—tracks like “Sandra Bland” and “The World of 45” are jarring, direct in their political messages. Then there is “The Road Not Taken,” which sets Lyons’s words against a musing, almost mournful saxophone, evoking a cinematic tenor to the track. The music ebbs and flows with her tales, making it as entrancing to listen to as Lyons herself.

Ella Haber unapologetically wears her Amy Winehouse adoration on her sleeve. Her vocal performance on “Old Friends” sounds very much like the late singer; unfortunately this places her music perhaps too much in the icon’s shadow. It’s when she sheds this influence, letting go of the Winehouse vocal inflections for a moment on “Behind Closed Eyes” —where she ironically sings, “I play Amy’s tunes to sing me sweet to sleep”—that one can better hear her sound, which is soulful and beautiful. At only 20 years old, she is a very strong songwriter, most evident on the toxic love-themed “Puppet” and “Clay,” both vulnerable and honest tracks. Haber is still finding her own voice as an artist, but her promise is great.

The first 50 seconds of Greg Blackman’s “The Rabble,” featuring Jack Jones, sounds a bit intense. Blackman’s vocal style is low and brooding, drawing deeply from rock, which could scare off those wanting safe-sounding soul. But those who continue listening will discover a dynamic artist who mixes ’70s street soul with hard-hitting hip-hop and hints of heavy metal. “Sailing,” which hears Blackman channelling an old-school reggae inflections vocally, and the foreboding “On the Ground” are oddly soothing. Blackman is a truly unique talent, fusing wildly diverse styles into a provocative mixture.