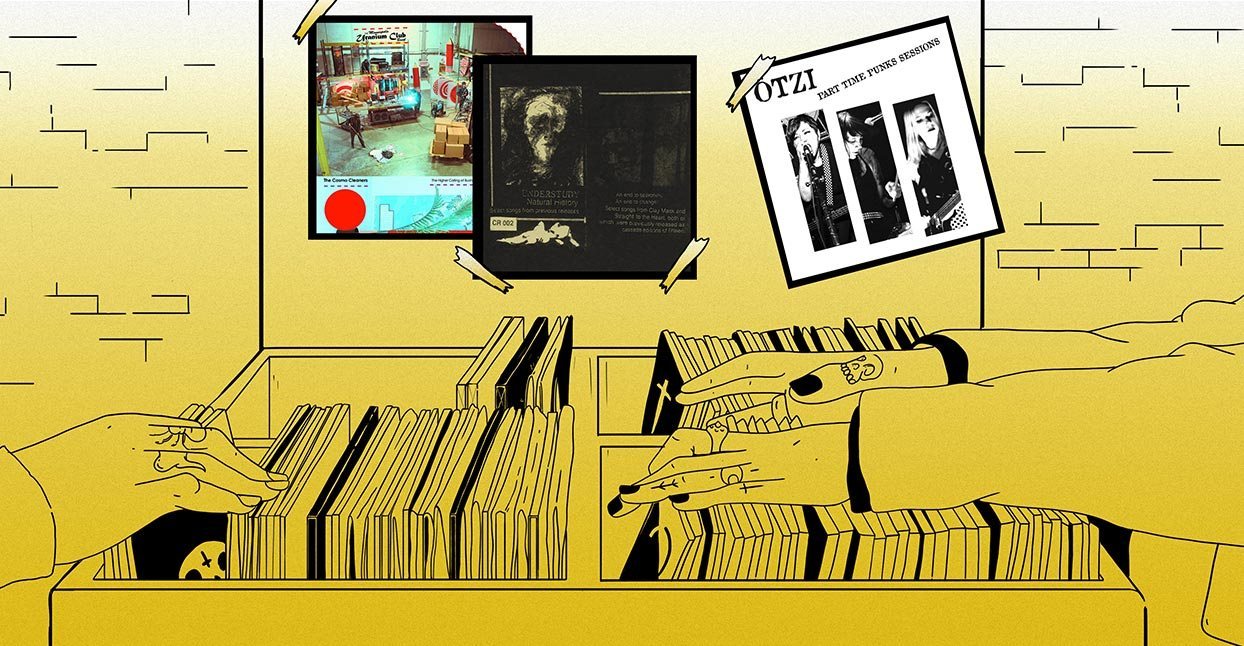 Bandcamp has long been a home for DIY punk and hardcore from around the world, touching all of the myriad subgenre styles and helping to translate the simple effectiveness of cut-and-paste to the digital age. For March’s edition of the best punk releases on Bandcamp, Kerry Cardoza features weirdo rockers Uranium Club, the polished pop-punk of Potty Mouth, the proto-punk of Mexico’s Polo Pepo, and much more.

This four-song EP opens with the dark, slow “Ballad of Oiwa,” a new track from Oakland trio Ötzi. The opening melodic bassline, which remains strong throughout, helps set a pop-goth tone (think: the Cure’s radio hits). But the dirge-like singing reminds me of the powerhouse vocals of Whore Paint’s Reba Mitchell; they sound as if they’re being piped in straight from the depths of hell.

The band’s intricate songwriting is on full display in the upbeat closing track, “Drought.” On that song, Akiko Sampson and Gina Marie use their voices to create layers of sound, with the background vocals seeming to lift up the main narrative thread—it’s almost like you’re listening to someone’s internal dialogue. While dark punk has definitely gained in popularity in recent years, Ötzi set themselves apart. Not only are they skilled musicians writing complex instrumentation and thoughtful lyrics (which they make available here in Spanish and English), their songs have unique, personal depth. And the energetic live feeling from this Peel Sessions-like recording is quite possibly the best way to check this band out—that is, if you can’t see them IRL.

Pop punk can often feel like punk’s uncool younger sibling—no one wants to cop to listening to Blink-182 back in the day. Luckily for us, Potty Mouth don’t give a shit about what the punk masses consider cool. Since the band’s formation in 2011, they’ve delivered catchy melodies and earworms, and have proven to have genuine staying power. On their newest release, SNAFU, they are more polished than ever, with expertly-miked drums, studio-quality production, and track after track of (mostly) radio-friendly hits.

It’s been six long years since this three-piece’s last full-length. In interviews, the band have explained that disagreements (and disinvestment) from labels caused them to strike out on their own, returning to their DIY roots and releasing this album on Get Better Records, founded by bassist Ally Einbinder’s partner, Alex Lichtenauer (the two now co-run the label together). Vocalist Abby Weems, who also plays guitar, exudes confidence without sounding too flashy; her deadpan delivery here recalls ‘90s alt-rock—Veruca Salt’s Nina Gordon and Louise Post, or later-era Liz Phair—and like those women, she’s got plenty of attitude. My favorite track, “Massachusetts,” is a relatable ode to feeling stuck in your hometown. (The band relocated from Western Massachusetts to Los Angeles in 2016.) The album ends with “Bottom Feeder,” which laments a person who seems destined to let you down, and features crazy-catchy guitar hooks and an anthemic breakdown. “Will you catch me next time I’m falling?” Weems shouts. It’s the kind of kick-ass closer Weezer wish they wrote.

Omaha’s Jocko blend tough hardcore beats with hip-hop-influenced vocals. That fusion may seem odd, but there’s actually a long history of cultural exchange between the two genres since their concurrent rise during the mid-to-late ’70s, from the mainstream (Body Count, anyone?) to the underground. Vocalist Jacob Adams sometimes spits out the lyrics in angry, staccato shouts a la Mike Judge (see “Muddy Waters”), and occasional straight-up raps, as on the intro to “Shades of Green.” This River City five-piece pack plenty of aggression into this full-length; witness the hard-hitting “Substance,” with its pounding drums and pissed-off vocals. That track’s funky guitar line is a welcome addition to the standard hardcore lexicon. Though there are lots of great, danceable offerings here, the strongest is album-opener “No Money No Problem,” a quick track that starts slow, then suddenly explodes into a full-on sonic assault.

This 7” was self-released in 1988 and—according to legend—disappeared from the punk landscape as quickly as it appeared. But thanks to Bandcamp Daily favorites La Vida Es Un Mus and Polo Pepo himself, the songs are now available via this rerelease. It is easy to make out the sonic and cultural influences behind these spare, raw recordings. The riffs have a distinct, ‘70s rock ‘n’ roll vibe (high tones, showy picking), the drums are bare bones yet still drive the melody forward (as The Ramones’ Tommy Ramone did), and the lyrics, delivered matter-of-factly, delve into the realities of growing up in a poor neighborhood north of Mexico City. The chorus of the title track is just Pepo repeating “San Felipe es punk” in a dry monotone.

“Punk for me was like a whole new thing,” Pepo said in a recent interview. “No solos. Each instrument was contributing to the music, and the music was like a brick. No one instrument was more important than any other instrument.” This interest in early punk, the way it positioned itself in opposition to stadium rock, led to the creation of this powerful recording, an important historical milestone both for Mexican punk and for the global scene.

Berlin-based quartet Diät made a name for themselves following the release of their 2015 debut full-length Positive Energy, and it was easy to see why: The heaviness of those dark, post-punk tracks hangs around like the coldness of a winter night. On this follow-up, the band take a more acerbic approach, with eight songs that ruminate on the hollowness and isolation of modern life, often through dry humor. Diät’s take on post-punk is never formulaic; most of their songs are melodic enough to groove to, and they sometimes veer into industrial territory. I love the high tones of the guitar on “Only My Own,” which stand in opposition to the effects-laden, low-mixed vocals. But my favorite track is “Missed the Bus,” a surprisingly tender reflection on the ways we disappoint ourselves.

Minneapolis weirdo rockers Uranium Club are back with an LP full of the band’s signature satirical, angular power-pop, proving them more than worthy of their label as “our generation’s Devo.” The tracks here range from meandering spoken word, as on “Michael’s Soliloquy,” to jangly, agitated post-punk as on “Man is the Loneliest Animal,” but on each track, the high energy of the Midwestern four-piece comes through—not to mention that the bandmates make clear that they don’t take themselves too seriously. The band’s humor (the album’s press copy implores listeners to “swish around some mouthwash and plug in your AirPods”) might sometimes bely their technical precision, heard clearly on the hyper, upbeat “Geodesic Son.” Either way, the lighthearted The Cosmo Cleaners is well worth a listen; it’s a perfect reprieve to the horrors of everyday life.