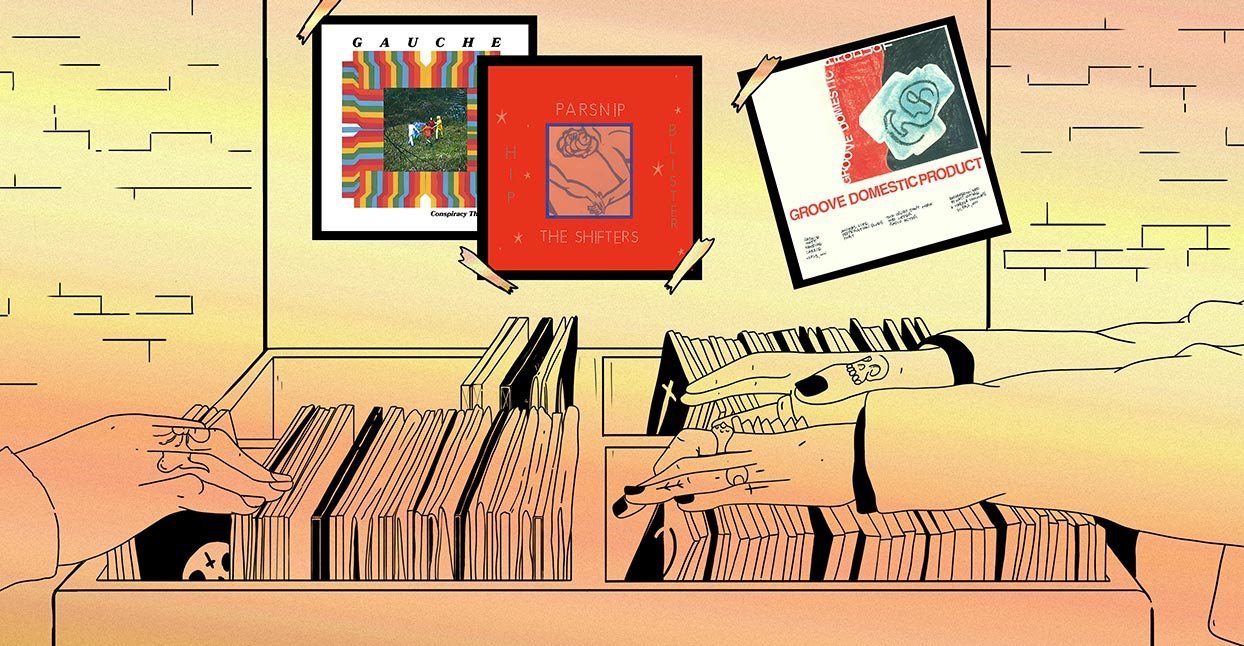 Bandcamp has long been a home for DIY punk and hardcore from around the world, touching all of the myriad subgenre styles and helping to translate the simple effectiveness of cut-and-paste to the digital age. For January’s edition of the best punk releases on Bandcamp, Kerry Cardoza highlights the dark, hook-heavy post-punk of Scotland’s Public Service, an exciting, cacophonous single from DC’s Gauche, a raw LP from Austin’s proto-punk Chronophage, and much more—hopefully a harbinger that 2019 will be a stellar year for punk.

This Scottish quartet play dark, hook-heavy punk, with the vocalist—unnamed in the liner notes—expertly channeling the eerie warble of Siouxsie Sioux. This EP follows a 2017 demo, a much rawer offering, though the band’s ear for melody and the tortured passion behind the vocals was present even then. The reverberating cadence of the vocals is goosebump-inducing, translating the band’s stated distrust of men to the listener in a visceral way. “Is this real? O desire,” the vocalist pleads on the second track, a perfect number with guitar and basslines that deftly build the rhythmic tension necessary for the dancefloor.

It’s been four long years since D.C.’s Gauche released their debut tape, Get Away with Gauche, on which they were impressively able to capture the chaotic energy of their live shows. Recently signed to Merge Records, the band is slated to release a full-length later this year; this track is just a teaser. The lyrics rail against the toxicity of fake news, and in particular the bizarre saga of Pizzagate, an event that personally affected the band’s Daniele Yandel. Gauche consist of a rotating cast of collaborators, playing your typical guitar, bass, and drums, but also employing gang-style vocals, horns, tambourines, egg shakers, handclaps, and other assorted percussive instruments. If this high-energy sonic bonanza of a track is any indication, Gauche’s forthcoming record will surely be a highlight of 2019.

Over the course of several tape releases, Chronophage have remained rough around the edges. Perfection is not their goal. On their debut vinyl 12”, the Austin-based band offer garage-influenced post-punk that tips into the off-kilter pop style of very late ’80s/early ’90s college rock; one could easily imagine them touring with Violent Femmes or Mecca Normal. Bandmates alternate vocal duties, which are mixed low to sound like just another instrument. My favorite track is the upbeat “She Paid the Ultimate Price,” a keyboard-driven ode to a femme fatale that ends in pure cacophony.

This split EP pairs two of Melbourne’s best lo-fi post-punk bands—Parsnip and The Shifters—both of which wouldn’t be out of place on NME’s classic C86 compilation. Parsnip, who recently released their second 7”, play weirdo power-pop that seems equally influenced by ‘60s girl groups and ‘90s U.K. bands like Comet Gain or Thee Headcoatees. Their use of keyboards and sickly sweet vocal harmonies sound like a children’s record left to warp in the sun. The Shifters contribute three minimal tracks that bring to mind early post-punk like The Fall, or even proto-punk like the Velvet Underground. All in all, a great EP to listen to while dreaming of warmer days.

Chicago’s The Pornography Glows are back at long last, with two new tracks that show the trio to be as bratty as ever. Featuring straightforward, driving drums, strong, new-wavey basslines and jangly, post-punk riffs, this recording is a bit cleaner, with denser compositions than those captured on the band’s 2016 demo. Vocalist Kevin Taylor’s ability to veer between vocal styles helps distinguish the Porno Glows from their minimal contemporaries like Gen Pop or Marbled Eye. On “Pleasures,” Taylor turns on a dime from deadpan spoken word to a snarling taunt: “Why don’t you say things more? I don’t know,” he shouts, tacitly expressing the difficulty of communicating one’s desires.

The debut release from this Minneapolis band is a bit hard to pin down. There are the grooving, staccato riffs reminiscent of early Fugazi on “Hurt,” and the messy dissonance of “Animal Life,” alongside clear vocals delivered with the matter-of-fact punch of Slant 6. Taken together, Groove Domestic Product (which features members of Patsy, Uranium Club, and Mystic Inane) play their own brand of punk. For a demo, this release has impressive production value and shows the band already playing cohesively together. One especially strong standout is “The Leper,” featuring alternating vocal lines, a creepy melody, and an epic, psychedelic outro for the ages.