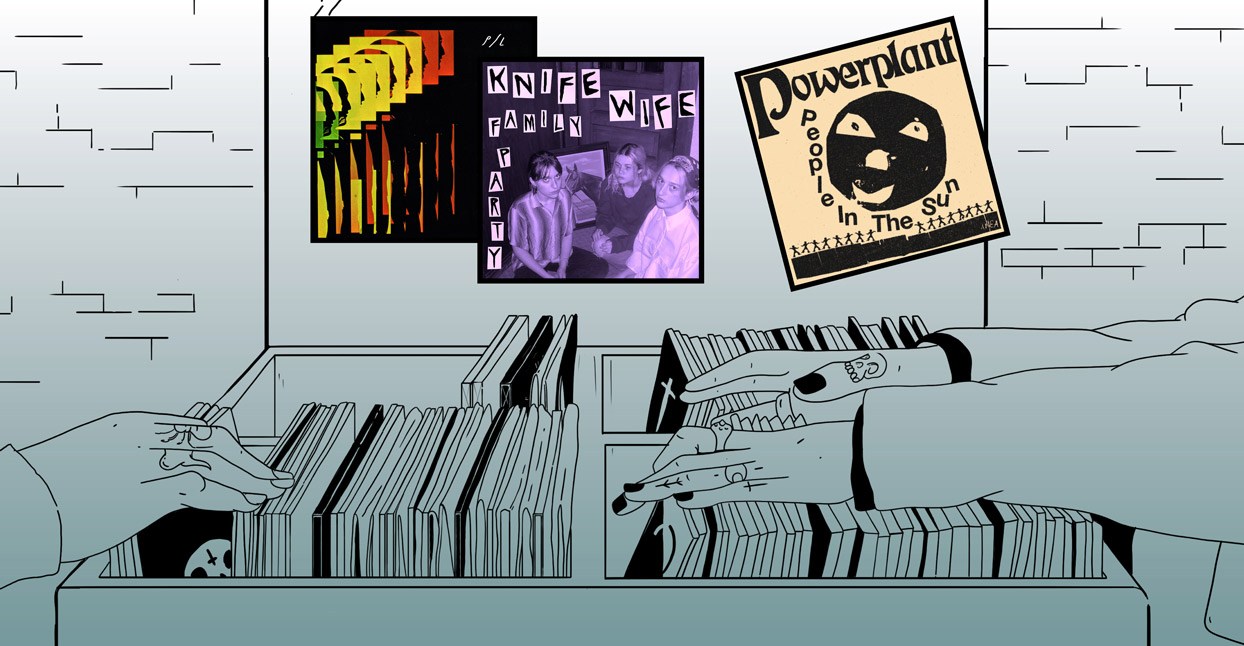 Bandcamp has long been a home for DIY punk and hardcore from around the world, touching all of the myriad subgenre styles and helping to translate the simple effectiveness of cut-and-paste to the digital age. For August’s edition of the best punk releases on Bandcamp, Kerry Cardoza features the synth-punk of London’s Powerplant, the raw hardcore of Mexico City’s Soga, the hard EBM of Chicago’s Club Music, and much more.

This sophomore album from Cleveland quartet Pleasure Leftists sounds like a throwback to the late-1970s height of post-punk. The instruments are crisp, with hints of darkwave, and singer Haley Morris’s vocals soar throughout. Like their English forebears New Order, these songs are easy to groove to, particularly those in the second half of the album. “Phenomenon” is easily the highlight, a high-energy bop with an impossibly catchy chorus and an epic intro that slowly builds anticipation. “The Sign” is a strong closer, a slower number that ebbs and flows, with ringing guitars and a strong bassline to bind everything together.

DC’s Knife Wife take minimalist punk to its most extreme: stripped-down bass, guitar, drums, and vocals delivered without affect. Listening to it via the cold, impersonal void of the world wide web seems almost too fitting. On “Dogs,” the band members—Sami Cola, Nico Castleman, and Ruby Parrish—make high-pitched intonations, almost echoing the sound of a sinister dog whistle. “Every Living Thing” is structured like a schoolyard conversation: “The other kids at school make fun of me / ‘Cause I eat every living thing in sight,” go the deadpan lyrics. “Gross, that’s all fucking gross,” is the reply, “C’mere, I’ll kiss you right on the mouth.” The gross-out imagery, coupled with the fearlessness of being seen as uncool, seems like a direct descendent of Bikini Kill’s “Rebel Girl,” a song that was released at a time when it was still shocking to proudly declare that a cocky dyke was your best friend. Knife Wife combine the simple vocal delivery of early Cat Power with the noisiness of Sonic Youth for an album that would make a perfect score for the nausea-inducing Gummo.

Powerplant
People In The Sun

It’s impossible to listen to Powerplant while sitting still. Hard to pigeonhole in a single genre, the London band is the creation of one-man powerhouse Theo Zhykharyev. Throbbing synths, psychedelic guitar riffs, and the deep, penetrating vocals make for an energetic record that’s perfect for pogo-ing. “True Love” is an album highlight—a dancey, romantic track with an energetic new wave chorus. The title track is another banger, a driving, distorted anthem with echoing glam-rock vocals, it’s one of the album’s more straight-ahead punk songs. Part of the joy of this full-length is its garagey, lo-fi charm; it doesn’t have the overproduced finish that a lot of new synth-punk has. Kudos to genre-defiers like Powerplant for keeping jaded punks on their toes.

Far from the mania of their Hattiesburg, MS peers Judy and the Jerks, Pleather play punk powerpop in the vein of Primo! or Bratmobile. Garage-rock guitars, vocals that veer between sing-song girl-group and affectless post-punk, and poppy drums combine for a record that demands repeated listens. “Chrysalis” is one of the album’s punkier songs, a repetitive track seemingly about an insect drowning itself in a pool. “Sunday” is another highlight, a song that would fit right in on the Lookout records discography. A collection of disparate imagery—all culled from a lazy Sunday—become the backdrop to a romantic sentiment: “Nobody knows me like you.”

The demo from this Mexico City-based trio first came out in 2018, but luckily for us, Iron Lung has remixed the tracks and reissued them on vinyl. Soga play blistering hardcore punk. It may be scrappy, but the members—Nadia, Sara, and Violeta—play it with expert precision. Their tightness should come as no surprise; they’re also part of hard-hitting bands like Riña, Cremalleras, and Ratas Del Vatican. “Encerrada” is a particularly sick track; each member contributes vocals, from sickly-sweet to brutal shouts, to create a hectic collage of sound. “Vil Migala” features big, flourishing rock guitar leads over a simple hardcore beat. “Insecto” similarly mixes genres and defies expectations, with vocals that recall Exene Cervenka’s drawn-out whines. These tracks never bore, each layers unexpected elements to create exciting punk that’s anything but run-of-the-mill.

Club Music Vol. 1, one of a slew of August releases from the prolific Chicago Research label, brings the hardness of EBM into the 21st century. The timing couldn’t be more apt. Industrial, oversized electronic beats, deep, fuzzy synth lines, and repeated, effects-heavy vocals work together to make dark but danceable tracks. This music is hard, like new wave’s seedy underbelly. It’s industrial punk that seeks to alienate the listener, not draw them in. What better way to tune out the catastrophe that is the outside world than to tune in to the controlled chaos of Club Music? “Purity For People” is perhaps the strongest track here, with minimal parts that slowly simmer and build on its each other to haunting, hypnotic ends.

Parsnip
When The Tree Bears Fruit

Melbourne quartet Parsnip have finally released their trippy, playful punk on a full-length record. The poppy drums, garage punk bass and guitar, off-kilter keyboards, and bubbegum harmonies make for a record that feels like taking a carnival ride after eating too much cottton candy. The lazy “Too Late” is a highlight; its lyrics reflect on the idea of giving up on your dreams, backed by gang vocals and a simple keyboard refrain. The psych-pop “Soft Spot” is a good indication of the band’s overall vibe, with the opening line “Happiness is happening.” Though the upbeat, poppy songs give the impression of lightheartedness, like children’s rhymes and girl groups, the underlying themes often deal with loneliness and despair.