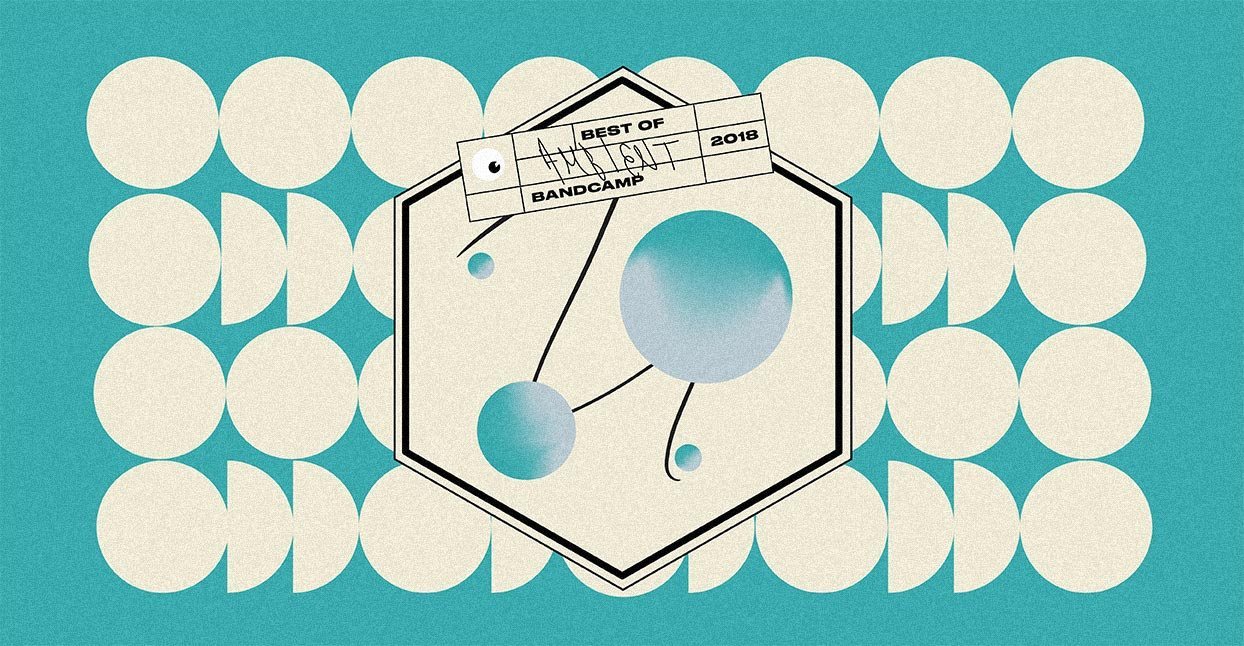 There are infinite atmospheric worlds available on Bandcamp, from the dreamy to the nightmarish, and the meditative to the deeply unsettling. These compositions often fall under the ambient umbrella, albums without words that are both thoughtful and thought-provoking in their own way. These are the Best Ambient Albums of 2018.

Meitei / 冥丁 was one of 2018’s most striking and unique discoveries in ambient music, and his debut, Kwaidan / 怪談, immediately captures something both profoundly beautiful and deeply unnerving. “Kwaidan” is a transliteration of kaidan, which are Japanese ghost stories, notably memorialized in the 1964 horror anthology film. Off-kilter percussion and growling vocals are spliced between reversing and glitching tones, and Meitei / 冥丁 periodically speaks over his beautifully strange music in his native tongue. Kwaidan / 怪談  is markedly different than some of the ambient music that has been coming from Japan in recent years—it’s darker and weirder, befitting its theme.

The New Atlantis label quickly followed up the release of the excellent JQ album Invisible, which was mentioned in the May edition of this column, with an EP from London-based Wild Adoration. EP1 is an enchanting introduction to Wild Adoration’s musical world, which takes inspiration from jazz, R&B, techno, and electronica. Twisted snares shake like a slithering rattlesnake on “Stripped,” sounding like footwork in slow motion. Wild Adoration’s reverb-treated voice, which occasionally brings to mind FKA twigs or Cocteau Twins, acts as an extra instrument in the compositions, with various samples layered harmoniously over the foregrounding vocals. By the time heavenly closer “Soul” arrives, it’s hard not to want more.

The incandescent piano keys introduced in stereo on opener “Neroli” on Ecce Homo, Istanbul-based artist Ipek Gorgun’s latest album, is captivating. Gorgun, reflecting on humanity in all of its aspects, contrasts light, soft sounds, like those keys, with dark, ominous atmospheres created through a gnarled low-end. Any sign of sweetness—briefly channeled through mesmerizing, gleaming synths on tracks like “Tserin Dropchut”—is immediately distorted and warped with snarling noise. Throughout the album, Gorgun folds in several spoken word samples, most hauntingly on “Bohemian Grove.” The track collages various American voices reporting on the Californian secret society Bohemian Grove, an annual private gathering of some of the world’s most powerful men. (Many of these are vocal clips from the documentary Dark Secrets Inside Bohemian Grove, by disgraced conspiracy theorist and supplement salesman Alex Jones). It’s the most overt reference pointing to humanity’s destructive capabilities; the darkened and somber tone of tracks such as “Afterburner,” too, point to this perspective.

Cruel Diagonals combines electronic production, transcendental vocals, drones, and field recordings into stunning compositions. An insight into her field recording expeditions to industrial spaces was recently documented on Twitter, featuring the hyperreal sound of her using a hammer to hit rocks. In July, her stunning debut album Disambiguation was released on Drawing Room Records; Monolithic Nuance, on Longform Editions, is its follow-up. Monolithic Nuance begins with layers of her voice bathing in expanding pools of echo, commanding listeners’ full attention straight away. There’s a gruff drone that arises from beneath the crisp, aqueous vocals, adding an unsettling atmosphere to the celestial timbre of her voice. Ominous squelches fizzle intensely like bubbles rising to the surface of a liquid, but quickly morph into denser spheres, their textures resembling a muddy swamp. The composition gets progressively darker in tone as it moves along, allowing listeners to confront uncomfortable and unsettling memories head-on, rather than looking away from them. When the atmosphere reaches a heavy peak, Cruel Diagonals’s incredible voice breaks through to deliver otherworldly harmonies and whispered spoken word passages, before delving into Eurorack modular synthesis by way of searing laser sounds.

New York’s Eliane Gazzard works with enchanting experimental rhythms, using different forms of wood percussion to make spacious ambient and experimental compositions that lend themselves to deep listening. Aurora Ouroboros Borealis uses marimba strokes to gently form patterns across the track’s structure. There’s an evocation of the natural world, too; the use of wood block on “Barren” sounds like a woodpecker hammering into the bark of a tree. The end result is one of the most organic, lifelike ambient albums of the year.

Yialmelic Frequencies is the project of L.A. resident Diva Dompé (eldest daughter of Bauhaus’ Kevin Haskins Dompe). She composes ASMR-tinged experimental music, and has a monthly show on local station Dublab called Yialmelic Transmissions, which features monthly guided meditations. Yililok is her second release under the name, offering five different meditations. The closer to the cassette is aptly named “Angel Garden”—the celestial instrumentation on the track is accompanied by the warm glow of tape hiss. The track floats along quietly until the 11-minute mark, when polyrhythmic percussion slots beautifully into the meditation’s ending. Elsewhere on the record, Dompé explores complex, alien-sounding frequencies on tracks such as “Aggregate” and “Auric Massage,” and synth-y lullabies on “Clay,” “Vibration Fruits,” and the aforementioned “Angel Garden.”

When California synthesist Emily A. Sprague released her debut record Water Memory in the winter last year, she quickly found herself praised by critics as one of ambient’s most intriguing rising artists: an expectation she met—exceeded, even—on her rich follow-up Mount Vision. Textural highlights abound in “Huckleberry,” where ASMR-style tapping meets sticky synth melodies, surrounded by ricocheting frequencies. On “Piano 1,” warped effects imbue the cascading keys with a slick, digital sheen. There are a lot of smaller details to delight in, as well, from the discordant plink of piano keys being pressed down on “Piano 1,” to the exotic birds squawking in the background on “Piano 2 (Mount Vision).”

Blessed with a huge talent for fusing dub and ambient, Osaka-based 7FO followed up releases on Bristol dub-focused label Bokeh Versions, as well as RVNG Intl. with Moment (Selected Works 2012​-​2017), this year’s inaugural release on Berlin label Métron Records. Compared to the dub-influenced palette of its predecessors, Moment displays a stronger focus on spacey melodies and heavy guitar sounds, contorted through digital effects: consider the shimmering chimes on “Fate,” leavened by the producer’s unusual trills and dizzy frequencies. Common ambient accompaniments, like bird sounds and rain, are stretched and warped to sound less organic; the playful chug of “Hakko Suru Zero / 発酵するゼロ” is particularly enchanting, accompanied by dial-up modem notes and synths that sound like they’re coming from the inside of a spaceship.