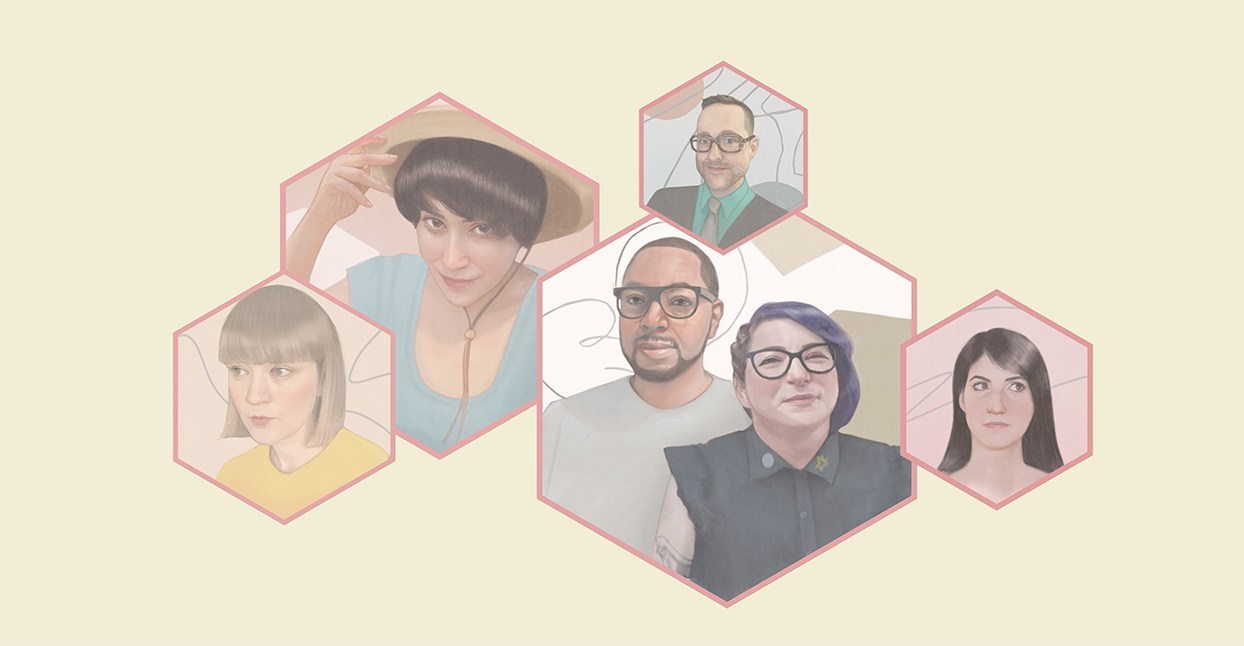 At the risk of repeating what I wrote in this section last year, I’ll just say that if there is a single .gif that captures the way I felt in 2018, it was this one. Which is maybe why the two records that were my constant go-to’s over the last 12 months are essentially neck-and-neck for my Favorite Album of the Year slot—because both of them captured for me what it felt like to spend a year hurtling anxiously through space. On Everything’s Fine, Jean Grae & Quelle Chris captured the physical tumult; no other record this year spoke to the panoply of individual experiences in America with such clarity, deftness, wry humor, and razor-point wit. Many albums try to be topical and end up overwrought or—worse—seeming like they’re using personal trauma as a marketing hook. Grae and Chris avoided those pitfalls entirely by giving us a record that bypassed glib talking points in favor of flesh-and-blood human perspective. In that way, it seemed to touch on every major issue that arose over the course of the last year, because it focused on the one common element in all of them: the humanity. “They came first for me, and I spoke up,” raps Grae on “Peacock,” deftly flipping the classic Martin Niemöller poem, “with every line I spoke, they just tightened the yoke up.” Everything’s Fine is the sound of the yoke tightening, the sound of gallows humor as a last resort in the face of oppression. And while Jean & Quelle spend the bulk of Everything’s Fine hurling bodies against the ropes, they leave the finishing move to Nick Offerman, whose spoken interlude lands like buckshot in the gut: “You don’t have to do anything about issues that don’t affect you—why would you?” he asks dryly. “These things figure themselves out.”

If Everything’s Fine was a record about the flesh, Aisha Devi’s DNA Feelings was a record about the spirit. “Your matter ain’t you,” she proclaims early in the album, before beckoning, “Let’s witness the dislocation of the Alpha.” DNA Feelings dared to imagine another world, a world of spirit and energy, a world of transcendence and hope and possibility—and it managed to do it in a way that didn’t feel pie-eyed, or like it was trying to minimize the problems of the here and now. Every time I listened to it, it cleaved my brain in two, not just for the ways it seemed to be re-inventing music from scratch in every single song, but for the fact that it offered some kind of promise of spiritual release—of a higher plane or, as the book of Hebrews puts it, “the substance of things hoped for, the evidence of things not seen.” These two albums worked in tandem for me this year: the idea that our individual selves are greater than the sum of our matter, coupled with the knowledge that that idea doesn’t get us off the hook when it comes to dealing with present injustice. 2018 was a hard year. These are the albums that made it a little more bearable for me.

Enjoy the process. I’ve heard this from several well-intentioned people over the past year. Take your time, Marcus. Enjoy. The. Process. They’re right, though. Since I started writing this, I’ve had my eyes fixated too much on the finish line. I don’t know how to relax. I never have. It’s been a source of lighthearted contention with a certain editorial director :-), who’s told me several times that I need to chill the phuck out. I’m trying, y’all.

Music helps. Along with the records below, I tend to play meditative work to keep me sane. Maybe that’s why I love the new Makaya McCraven album so much. Universal Beings might be labeled “jazz,” but it’s essentially an ambient beat tape with occasional saxophone wails and rising percussion. Records like KRYPTONYTE and Joy Postell’s Diaspora don’t apologize for black; the former plays like a grungy Southern rap cassette from 1994, the latter an old R&B CD circa 1988. Kev Brown completed a valiant comeback, releasing three albums this year. Fill In The Blank was my favorite of the pack: mixing introspective rhymes and slow- to mid-tempo beats, Brown made mundane activities—like writing with a new pen and shoveling the snow—sound incredibly intriguing. Then there’s Everything’s Fine, my favorite album of any genre released in 2018. At this point, I’ve written a lot about it, and Jean and Quelle are likely tired of reading my adjectives. So I’ll say this once and for all: I needed that album and still do. With its blend of funk, jazz, and hip-hop, nothing else resonated quite like it. Here are the records that help me chill and relax.

I have an incredibly hard time with best-of lists; this time of year always gives me severe agita, not just because of the amount of work but the idea of ranking. Listening is such an incredibly subjective thing; one can draw out what makes a record special, what makes it worth someone’s time, but it’s much more difficult to put two vastly different records up against one another and imply that one is better than another.

This year is unbelievably difficult to write about, too. I feel like I was a perfectly good and serviceable iron tool that entered a crucible around the summer and came out the other side a different shape, for different functions. I’ve cooled down a bit, but the world outside continues to rage, from wildfires to tear gas. All I can do is what I’ve always done—gather the people I love close, and keep fighting for survival (and beyond that, a more just and equitable society).

These 10 records are an assortment that meant a lot to me this year that haven’t gotten a highlight elsewhere in this package—how I’m making a cordial and temporary peace with the problems of ranked lists. Some served as refuge for me from this harsh year; others were fuel to keep going. (Some were both.) Some are more pleasurable, others more confrontational. (Depends on your perspective.) All are smart and thoughtful, drawing on artistic wealths of skill, knowledge, and heart, reconfiguring underground traditions and styles in ways only these musicians can. I hope you enjoy them as much as I do.

In October 2016, less than two years before he took his own life, legendary chef Anthony Bourdain swore public allegiance to the unknown. “If I believe in anything, it is doubt,” he told Vogue. “The root cause of all life’s problems is looking for a simple fucking answer.” The same can be said for music, and especially music criticism. To wit, historical timelines, autobiographical details, and aesthetic insights can be useful in establishing context for a given song or album. But to conceive music as a cause-and-effect process is to overlook its boundlessness, its anti-science: in other words, what makes it so magical to begin with.

Perhaps that’s why so many of my favorite albums of 2018 unfolded as, well…complete and total clusterfucks. Between Daughters’ terrorizing noise-rock and Tropical Fuck Storm’s apocalyptic boogaloo, Xinilsupreme’s earsplitting shoegaze and Anna von Hausswolff’s baroque-goth insanity, this year gave us some truly maddening LPs, the majority of which I’ll probably never fully wrap my head around. That’s fine by me; like the late, great, Mr. Bourdain said, sometimes there’s no simple fucking answer. And that’s a beautiful, beautiful thing.

Daughters, You Won’t Get What You Want
Tropical Fuck Storm, A Laughing Death in Meatspace
The Armed, Only Love
Xinlisupreme, I AM NOT SHINZO ABE
Anna von Hausswolff, Dead Magic
JPEGMAFIA, Veteran
Idles, Joy as an Act of Resistance.
Rolo Tomassi, Time Will Die And Love Will Bury It
Zeal & Ardor, Stranger Fruit
Chapel of Disease, ...And as We Have Seen the Storm, We Have Embraced the Eye

Earlier this year in Chicago I was walking to dinner, framed on one side by that heartbreaking downtown skyline and in front of me, a woman in headphones dancing down the street. Straight-up dancing! As in arms waving, legs kicking, head bobbing, hips swinging, fingers snapping, dancing as if nobody was watching, except for me. I loved it because I’m the same way: earbuds in everywhere I go, the better to groove down on city sidewalks, train platforms, buses, and waiting in TSA lines. But it’s not just in transit when I need a record pouring into my ears. Even while doing something as quotidien as mopping the kitchen floor, I cannot be without music.

The only time I’m not listening to music is when I’m writing, when I need absolute quiet to think about how best to communicate the indescribable incandescence of music to you, our wonderfully curious Bandcamp Daily audience. All of which is to say that I’ve got music in my brain and in my heart every minute of every day, and, judging from the thoughtful comments and tweets coming in regularly via the Bandcamp socials, I suspect many of you feel the same. So, in conclusion, I’d like to give big ups to all music people everywhere: from the DIY punks throwing shows in their basements, to the teeny tape labels operating out of bedrooms, to the kids who go to shows alone, all the people still buying records, and especially to everyone dancing in public to a song only they can hear. The world is hard enough without denying yourself the simple pleasure of losing yourself in a great tune just because a stranger might think you’re “uncool.” Lemme tell ya, you’re the coolest in my book. These are just a few of the records that sent me dancing this year. Maybe they’ll do the same for you.

Eighteen months ago, I woke up to find Britain had voted itself back into the 1950s. It’s been impossible to experience any culture since without it being coloured, in some way, by the Brexit vote. In the face of so much hatred, London has felt like a beacon of tolerance and open-mindedness, particularly the pocket of Southeast London, where I live. Much of the music I’ve loved most this year has some connection to my neighbourhood—which, as one of the most diverse areas of one the world’s most multicultural cities, has felt like a haven from the intolerance infecting the rest of the country. It’s challenged jingoism, countered insularity and shown how the cross-pollination of ideas, sounds, and cultures is still the best way to create the future.

I could have picked records exclusively from the wave of young, British jazz musicians, who’ve dragged their music out of boujee bars and into warehouses and festivals. But if forced to choose, the records released this year by keyboardist Joe Armon-Jones, saxophonist Nubya Garcia, and drummer Moses Boyd, best hint at the scene’s range and its hunger for new influences, channeling everything from West Coast rap to two-step and jungle. It’s jazz best enjoyed with sweat dripping from the ceiling, and sounds like the start of something revolutionary.

On a more soothing tip, Bryte’s blend of Afrobeats and U.K. funky on Too Good For Your Liking was like audio Prozac, to be taken any time the world felt overwhelming. In the face of regressive politics, Brownswood’s Future Bubblers reminded me to look to the future. And then there’s “iii’s Front,” the lead cut from Overmono’s EP for ace London label Whities, a shuddering percussion workout which sounds like a bin full of hammers being thrown down a fire escape. Whenever the news became too much, I turned it up and, suddenly, felt like I could walk through walls.