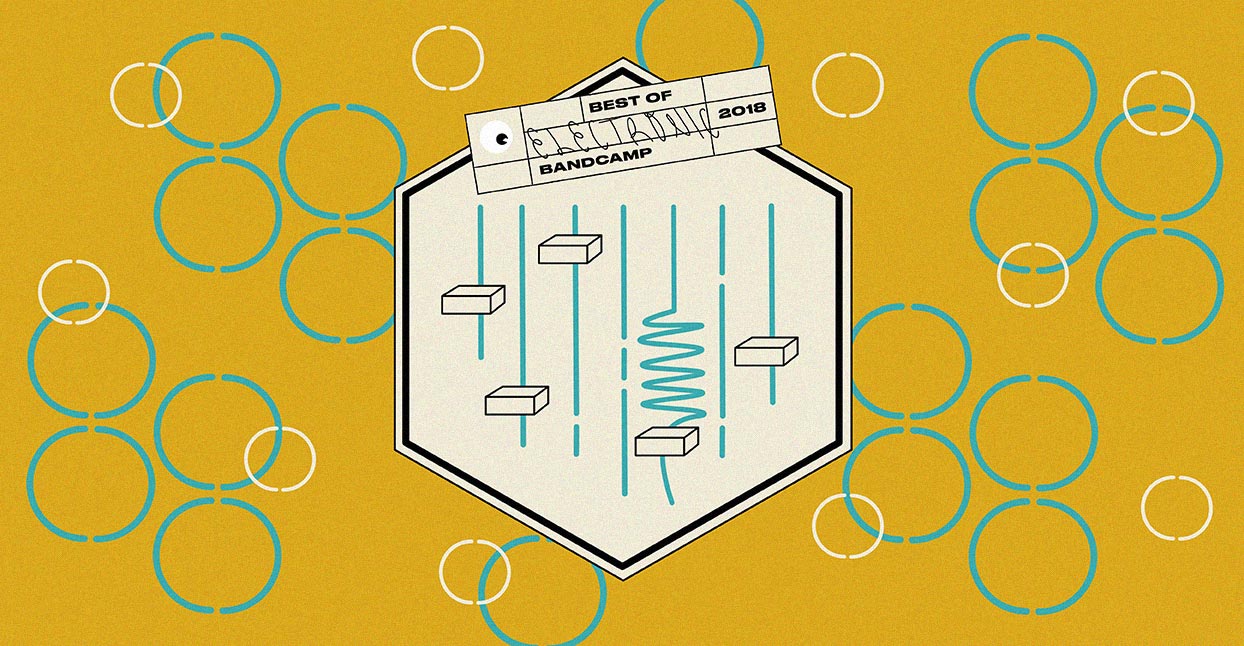 2018 has been a year of extraordinary flux in electronic club music. While the upper reaches of the DJ heirarchies continued to be dominated by maxed-out EDM and trance, with techno and tech-house jostling just beneath them, in the real world, genres and ideas seemed to be intermingling, exploring new evolutionary niches. Faithful old musical styles—jungle, disco, acid, electro—continued to prove themselves viable, but all around them, hybridity was the name of the game. Perhaps it has something to do with the rapid social and political shifts; perhaps musical and social homogeneity are being washed away and replaced by something more interesting; perhaps it’s just a patch of turbulence. Whatever the case, these certainly are “interesting times.” And while that can be seen as a curse in political and social terms, in music and culture, sometimes “interesting” is genuinely interesting. These are the Best Electronic Albums of 2018.

Tblisi, Georgia’s Bassiani club has been in the headlines lately for its tussles with the local authorities. But even before that, its reputation was spreading globally—not just for its ethos, but for its sound, which is built around subtle, immersive techno full of detail and melody. Bassiani resident Gigi Jikia, aka HVL, is a master at capturing that on wax. His tracks of drifting, melodic acid manage to liberally reference the greatest of the great—Aphex Twin, Basic Channel, Underground Resistance, Burial—while retaining a character all their own. That’s an extraordinary achievement in itself even before you get to how warm-hearted, memorable, and downright beautiful these tunes are.

In 2018, the more experimental ends of electronica have been responsible for producing some of the year’s most compelling music. It’s global in scope, with psychologically, sonically, and/or politically radical music pouring in from every continent. This awesome 25-track, two-and-a-half hour selection of newly-commissioned music from the Houndstooth label, run by London’s fabric club, is as good an introduction as you could want. It completely evaporates any boundaries between club and art space, dystopian and hopeful, pleasure and pain. And amazingly it all coheres. A sprawling, glorious mind-melter.

Of all the great electronic musicians rising up through the cracks between genres, Beijing-via-London producer Object Blue is one of the most consistently interesting. Her DJ sets are lessons in how to avoid getting stuck in a groove, and her tracks, while nominally techno—if you have to call them anything—never sound like anything you’ve heard before, and never repeat themselves. There’s nothing here that smacks of ostentatiously technical processing; her brilliance lies in the fact she starts with peculiar sounds and raw funk rhythms; whichever way she flings them, and whichever sharp left turns she might take, the source material is always rock solid.

Claudio Szynkier’s most internationally prominent achievement to date has been a few releases on Erol Alkan’s Phantasy Sound label. But the São Paulo sound artist and mystic has a decade of releases under his belt, all built on the deepest imaginable explorations of distortion, and the ways that rhythm can hide and emerge from it. This, his eighth album, falls at the gentler end of his output, with several tracks that sound like they were recorded by a ghost pianist in a dark cave. But there’s plenty of submerged techno crunch here, too. “Maybe,” says Szynkier, “it can… be called a monument for the people in need of a major trip.” Who are we to argue? 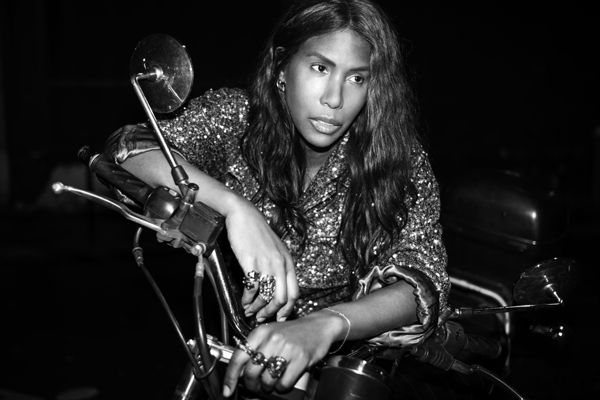 It’s been a triumphant year for Chicago house legend Miss Honey Dijon—touring the world with The Black Madonna, generally being recognized as the musical scholar and dancefloor destroyer that she is, and continuing to release some hefty records, to boot. This collection of remixes of tracks from 2017’s Best of Both Worlds brings together an absolute A-list of credible global house talent. As we said at the time of release, “every track here is house music with fire in its belly and a strut in its step”—and it’s worth the price of admission for Derrick Carter’s awesomely psychedelic hip house alone.

Hyperdub had a fantastic 2018, with Kode9 and Burial’s fabriclive100 album closing out the legendary mix series, their London club night Ø continuing to draw crowds, and sterling releases from young Edinburgh talent Proc Fiskal, U.K.-South African team-up Okzharp & Manthe Ribane, and label stalwart Scratcha DVA. But this mini-album stands out even among those riches. Nazar is an Angolan producer, formally an exile in Belgium, and he uses his home nation’s kuduro dance sound as a framework to examine its history of war. Heavy artillery, airstrikes, crowd chants, and noise are all woven into an incredibly human, incredibly engaging set of tracks. If he can keep this momentum, this is the launchpad for a truly remarkable talent.

A Love I Can’t Explain

Darren “dBridge” White has been at the heart of the British jungle and drum & bass scenes since the very beginning, traversing from the deepest underground to making stadium-filling anthems as part of Bad Company. But this century, with both his own music and the EXIT label, he’s carved out his own space: mournful, spacious, gravity-loosened, emphasizing the half-tempo pulse. On his first album in a decade, all of those elements are present, together with drifting echoes of Vangelis soundtracks, muttering voiceovers expressing paranoia about society and technology, and a general introspective, dissociative atmosphere. It’s subtle, restrained, and utterly absorbing.

“Deconstructed club” music has risen and fallen over the past few years—sometimes seeming like an extraordinary idea, sometimes feeling like dreadful hipster cliché for people who don’t actually like dancing. But every time it seems played out, it gets a new injection of life, and this year Shanghai artist, Instagram personality, and musician Wu Shanmin provided that and then some. Bringing in timbral hints of Chinese traditional instruments, edits worthy of the most advanced WARP IDM acts, and an overarching sense of dark humor, she makes some of the most vivid music of the year. Even as it fractures and fragments, it still feels like it belongs in the club.

The Hamburg DJ/producer Helena Hauff has been working her way through the techno ranks since her first release in 2013, but 2018 was clearly her year. She’d already broken through to headliner status with her no-nonsense DJ and live sets, which emphasized the raw textures of drum machines and acid synths. But then came Qualm, the album that absolutely encapsulated all of that. In certain senses there’s nothing new here, it’s just crunching acid-electro-techno that could have been made 25 years ago. Yet it seems utterly fresh at every turn, thanks to the sheer delight in soundmaking, and the underlying understanding of what this does to bodies and minds in the small hours, in the dark.

Paul “Scuba” Rose is currently retired from DJing, and perhaps that’s led him to some introspection and retrospection, because this album harks back to the days before his tech-house superstardom, back to his roots in dubstep—particularly the Sub:stance club night he and Paul Fowler ran at Berghain. The club was instrumental in bringing U.K. bass to the city, and played host to some of the most important names in ‘00s music, all of whom are on display here. Skream, Vex’d, Mala, TRG, Untold—every one of them at the height of their subsonic powers, all in a period where rules were unwritten, and dubstep was still in its ascendant phase. This is, quite simply, one of the best compilations of that movement, and an absolutely essential listen.

Acid is everywhere in 2018. It’s not just nostalgia, either, there’s something very current in the way the squelches, gloops, and curves of the Roland SH-101 and TB-303 bassline generators have oozed their way through the fabric of today’s music. This stuff still matters. And Posthuman, whose I ♥ Acid club nights have been vital in keeping the flame alive over many years, have raised their game and delivered the record of their careers. This is airborne acid, full of the science fiction dreams that first inspired electro, Detroit techno, and U.K. electronica producers, creating elegant audio dramas, but still utterly focused on the dancefloor.

Elysia Crampton is something of a mother figure to the new wave of ultra-detailed, politically radical electronic music, but her own music continues to evolve in its own space. As ever, she brings together pop, noise, electronica, Afro-Latin influences, and the sounds of her own Aymaran-Bolivian heritage—as well as hints of everything from jazz-fusion to metal. But where her early work could feel like a chaotic blizzard of edits, here, it feels fused into one. The groove and the extraordinary confidence of these six tracks are such that, even though there is noise and disruption, it feels like a powerful, unique personality, born from conflict and contradiction.

Nina Kraviz, for all her mega fame, remains a disruptive presence in the global techno big league. She’s never played predictably, and she’s always repped odd, old, or ornery sounds, and this latest compilation on her трип label continues that in fine style. There are old techno legends acting super rowdy (Aphex Twin in his Universal Indicator guise, and Marc Arcadipane as The Pilldriver), tripped-out acid, singing computers, tempos that border on the techno punk of Dutch “gabber” beats, and an overwhelming sense of glee in messing with minds. In a period when drearily predictably techno gets more and more mainstream, this is a reminder of how preposterous it can be while still reaching big audiences.