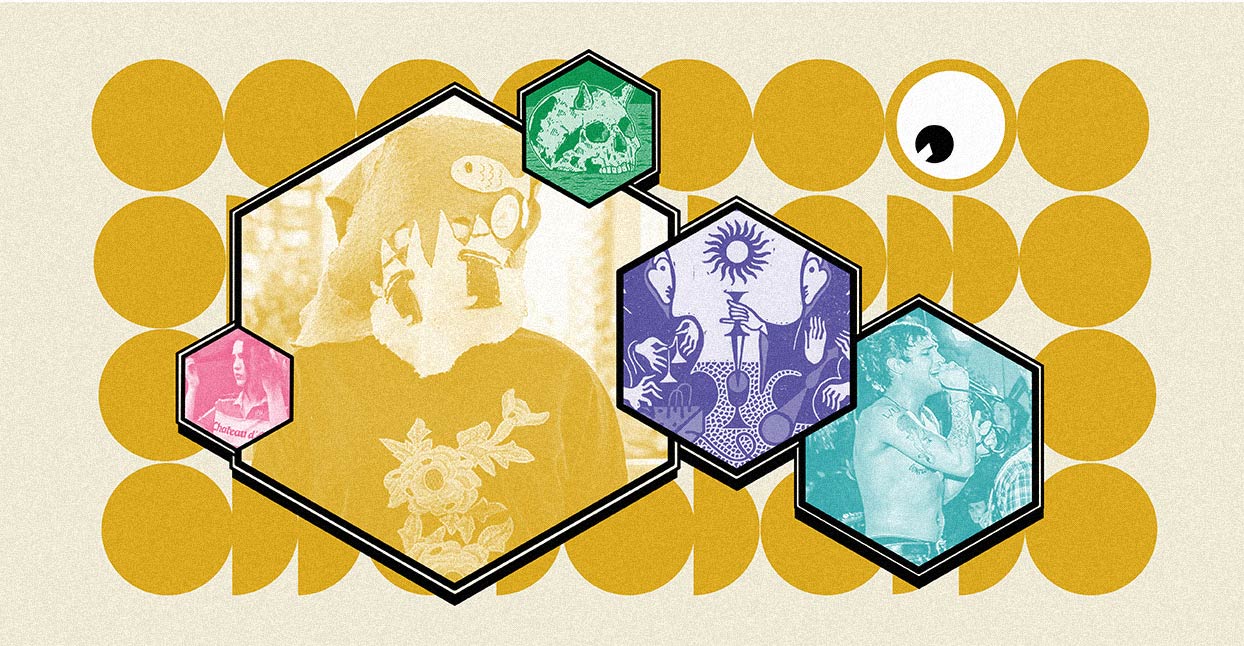 Images are integral to the way we appreciate sound; a great cover sets a mood, and puts you in the right headspace to appreciate the sonics behind the sleeve. We approach the illustration and photography we publish from the same angle: How well does it communicate the sound of the music? Does it convey something about this artist, or this scene, that enhances the way we understand it?

One of the best parts of my job is the chance to work with people who explore different ways of looking at the world—who can listen to a record and translate it into pictures. Our illustrators approach their work from a dizzying array of viewpoints, but they all share the same ideal: trying to communicate something unique about music. My favorite visuals this year have been the illustrations that come at the topic from an unexpected angle. Annu Kilpeläinen’s artwork captured the psychedelia of the Colombian electronica scene by channeling René Magritte; Sophie Hollington’s lino cuts captured the mood of dark ambient in a way that no other medium could have.

All artwork is collaborative, but our photography is overtly so. The best photographs are a conversation between the people on either side of the lens, and I often envy our photographers for the chance to spend time with and work with my favorite musicians. The selections we’ve chosen here either reveal something about their subjects, as with Sarah Bernhardt’s incredible images of Helena Hauff, or challenge our preconceptions, like Jun Yokoyama’s funny but melancholy shoot with Emamouse on the streets of Tokyo. As these images add context to the music, we wanted to complete the circle by asking their makers to reveal how they were made.

Hank Wood & the Hammerheads are so much fun. I love shooting them, because they keep me on my toes. For this shoot, there weren’t really any challenges—no one kicked me in the head, and I didn’t break anything, so I’d consider it a good day. I like photos where you can see movement and interaction. I don’t want the photos to feel static or quiet. I just try to capture it the way I feel it. All of my favorite old hardcore and punk photos are black and white, so for this shoot, I continued down the same path. It removes some distractions and helps to focus in on the moment.

For my illustrations, I use lino, which is a material made from compressed linseed oil and cork dust with a hessian back. You carve into the lino, and the areas that you cut away become the white areas in the final image. Once the lino is carved, I use a roller to ink up the lino block with black ink and print it on to paper. Then, I scan the print, and add the color in digitally. Relief printing already evokes a kind of archaic, ritualistic atmosphere, because it’s such an ancient way of image-making. I also depicted the musicians as being hooded and masked, as clothing and self-mythologizing plays a big part in the post-industrial genre. I got some background from researching all the artists, and then the idea of a hooded, masked band performing a ceremony in symmetry landed on my lap.

For this shoot, I tried to capture Emamouse’s weirdness and awkwardness—both in the scene, as well as in society in general. I am amazed by the ways she always attempts to push the borders of music and style. These photos were taken in Sugamo, Tokyo which is a high-street intended for Japanese grandparents. It was fun to go along with her and watch her among an older generation—they looked at her with unconcealed curiosity! Sometimes she interacted with random grannies while shooting. She also struck some weird and funny poses in front of a store selling red underwear—older people in Japan believe that red lingerie brings them luck and happiness. I think I was more embarrassed than she was; all tourists and shoppers saw was a crazy cameraman forcing her to put on a mask and take some photos. Hey Bandcamp: You owe me a lot!

I knew that Helena works with specific rough analog sounds, which is quite unique, so my aim was to create a visual equivalent to her music. I decided to work with two cameras for the commission: I used my digital DSLR, plus an analog camera with classic grainy film. During the shoot, I constantly switched the cameras whenever it felt right. Surprisingly, the digital and the analog photos worked quite well together. Helena is from Hamburg, and is closely linked to the city, so my aim was to find a more or less unseen location in Hamburg that would also fits her music. The Evangelical Lutheran Church in an industrial quarter of Hamburg came into my mind. It has an interesting modernist-brutalist appearance, with lots of metallic details and symbols. It’s surrounded by a beautiful small graveyard, which creates an almost romantic aura. Helena is such a friendly, open, and unpretentious person to photograph. It was a cool collaboration, because she added own ideas, and was open to experimenting.

I went through a few rounds of listening to the songs over the course of a couple of days before sketching. I had this image, Le Blanc Seing by Magritte, in my head for ages and the intense but disorienting feel of that image fit this music perfectly. I wanted to use this as the starting point, and add some psychedelic textures to it to represent the different styles and influences coming together, floating in and out through the palm trees. It was such a fun mix of songs, but it was also so wild at times, so it felt good to take a crazier route with the drawing too. At times I was staring at the image coming together thinking, ‘This is way too crazy.’ Then, I listened back to the songs and thought about the image actually being in Colombia with the electronic music beating in the background, and I thought, ‘Nah, it’s perfect.’

For this illustration, I tried to make something that felt like the mood of the music, using images that I imagined from the music. I usually work in pencil and then ink, depending on the project, but recently I have also been painting works and making small 3D pieces. For this project, I drew the pieces as separate smaller spot illustrations, and then I inked, colored, and pieced together the composition on the computer. Greys and blues seemed to fit the bands and the mood of piece best, without making it too depressing or hard to read. I tried a few different layouts until I got the final one.

For these kinds of portraits, I work with graphic tablet and Photoshop. I made some of the first illustrations for the Weekly using a more traditional method—ink on paper, which I then scan, and then rework the file on the computer to make it clean on a screen. On the one hand, it’s a cool way to do it, because you’ve got a ‘real’ physical drawing; on the other hand, it multiplies the amount of work. Besides, the magic of computer drawing is that you can give a pencil or an oil ‘feeling,’ change the color any time, or redraw endlessly. When I’m illustrating for the Weekly, Moni, Bandcamp’s Design Director, will send me a bio for the artist, some pictures of the band, as well as links to videos and their Instagram. Sometimes, the artist already has a strong graphic identity, and sometimes the music itself has influences you can build on. I try to find an angle to work from, and an idea to represent this particular type of music, then I search for the artist’s best facial expression, or most iconic one, and build a composition around that with elements that suggest the music.

I tend to shoot a mix of digital and medium format if I have the space and time to do so. I prefer to work with assistants, but for this shoot, I was solo lugging a big photo case around Brooklyn Heights trying to corral 20 people together. It’s tricky to shoot such a large group! They all seemed to love each other so much—I wanted to get a sense of their community. There was a constant push and pull of them teasing and praising one another. They also specifically requested that we recreate a version of ‘A Great Day in Harlem,’ but with all their colorful clothes and on a stoop we found
in Brooklyn.