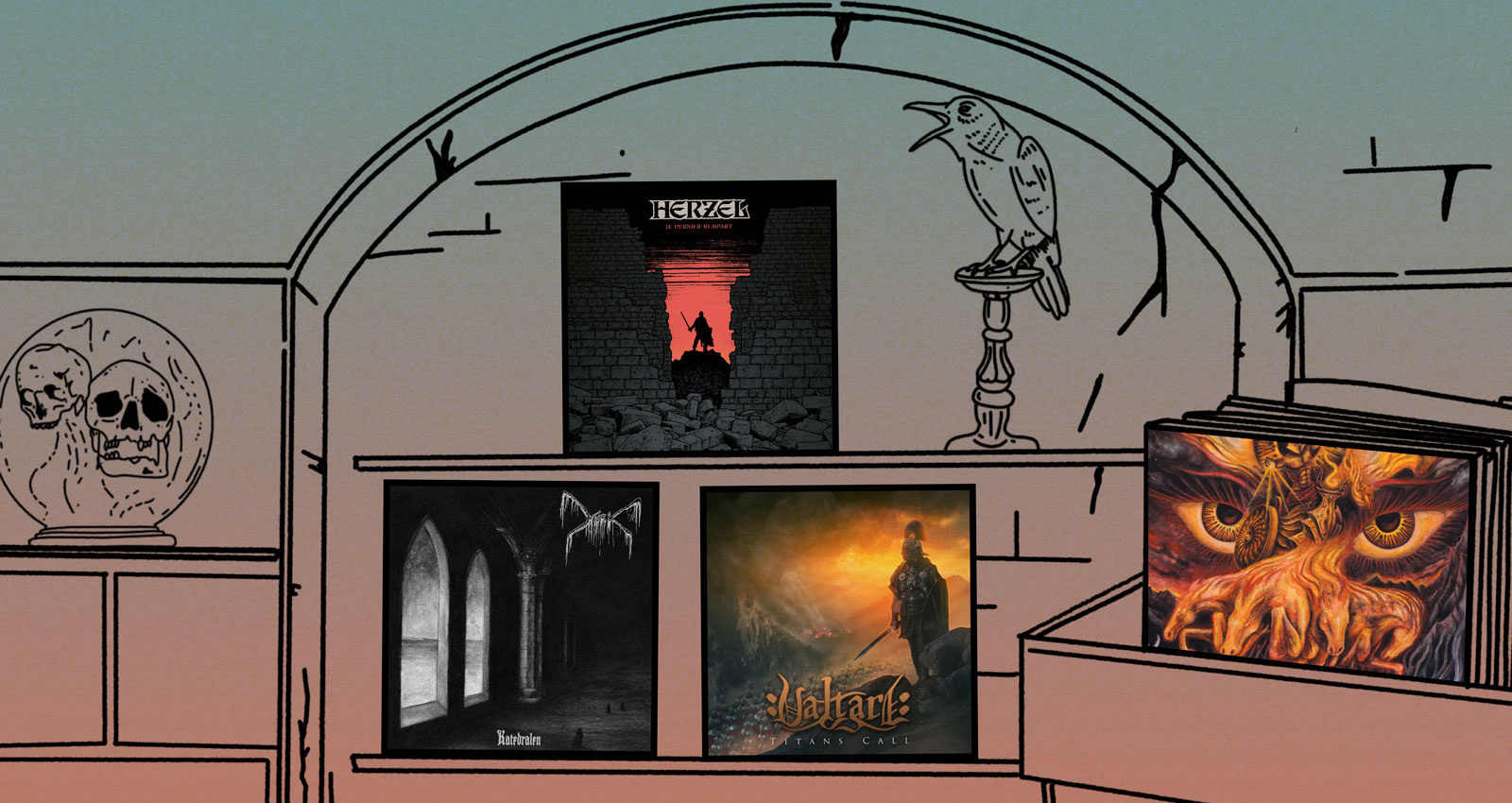 March was a great month for black metal on Bandcamp. Whether your tastes in black metal skew lo-fi or polished, dissonant or melodic, cosmic or earthly, there’s a great new album for you to discover this month. And if you’re not big on black metal, we’ve got you covered, too—March also brought chaotic mathcore, Euro-style power metal, and more.

Listening to Koldovstvo will require the use of your imagination. With no credited band members, no press photos, no song titles, and no listed country of origin, you can’t rely on the convenient contextual shortcuts to help make sense of the beguiling black metal on Ни царя, ни бога. That’s a thrillingly unmooring experience in 2021, and you may be surprised where the six songs on the project’s debut album sweep you away to. Personally, Ни царя, ни бога drops me into the court of some ancient castle, enthralled by unspeakable beauty, but also beset by quotidian harshness. Koldovstvo layer wind-tunnel riffing, blown-out drums, and tortured howls with folk-ish clean guitar lines and chantlike vocals—the agony and the ecstasy, forever intertwined. Without a specific region to pin their songs to—the Konstantin Flavitsky cover art and use of Cyrillic lettering suggest Russia, but I’m not convinced those aren’t red herrings—Koldovstvo exist for me in a kind of medieval realm of the mind. They’ve made the most engaging, enthralling atmospheric black metal album I’ve heard in years.

For Warrior Path’s sophomore album, The Mad King, project mastermind Andreas Sinanoglou has assembled a fantasy football roster of European power metal legends. Bob Katsionis, the former Firewind keyboardist who also produced and played on the band’s self-titled debut, returns to the fold. The real coup is the addition of Daniel Heiman, the singer who made a pair of classic records with Lost Horizon at the turn of the century, but has been largely quiet since. His presence enables Warrior Path to level up from the promising band they were on their debut into a legitimate contender for the most exciting power metal act going. Sinanoglou’s songwriting has leveled up, too. On The Mad King, he augments the straight-ahead power metal gallop of the debut with more melodic richness, tempo shifts, and atmospheric acoustic passages. That musical sophistication is in service of an epic concept album that riffs on King Lear, but winds up feeling more triumphant than tragic. It proves that Sinanoglou, Katsionis, and Heiman, along with drummer Dave Rundle, are every bit the superteam they appear to be on paper.

After completing a pair of side quests in the land of dungeon synth in 2020, Midnight Odyssey’s Dis Pater is back with the proper sequel to 2019’s Biolume Part 1 – In Tartarean Chains. True to M.O.’s M.O., Biolume Part 2 – The Golden Orb clocks in at a whopping 102 minutes—shy of the two-hour-plus runtimes of his first two albums, but still three LPs’ worth of maximalist, progressive black metal. The marathon length isn’t meant as an endurance test, but it does effectively blow up and recontextualize the traditional album listening experience. It’s thrilling to go through the kind of emotional peaks and valleys that would typically land deep into an album’s track list knowing there’s still over an hour of music left to come. Throughout The Golden Orb, that music is meticulously crafted, and more all-encompassing of Dis Pater’s omnivorous tastes than any of his previous work. Black metal is still the backbone of the album, but it’s interwoven with ambient synth, krautrock, classic prog, epic doom, and even medieval music. If it serves Dis Pater’s vision, it’s in here. Conceptually, that vision is a meditation on the limitless power of the Sun to punish humans—a story rooted in ancient myth, but that can easily be read as an allegory for manmade climate change and the suffering due if we don’t reverse course.

Kate Davies is a force of nature. She serves as the primary songwriter, lyricist, vocalist, and guitarist for UK mathcore trio Pupil Slicer, and on their debut album Mirrors, she demonstrates more range than most artists do in an entire career. Whether firing off minute-long chaotic hardcore missives or working through tangled, multi-part epics, all eyes and ears are on Davies. At times, her guitar parts defy logic; she admits that she didn’t try to learn them until she had to track them, lending to their uncanny quality. For their part, bassist Luke Fabian and drummer Josh Andrews are more than up to the task of keeping up with Davies, and their ability to lock into off-kilter rhythms is equally critical to the band’s sound. This kind of music only works if the emotional truth of the songs and the technical prowess of the players are in perfect harmony, and Pupil Slicer have that down to a science. Music theory nerds will freak out at the time signatures and arrangements on Mirrors, but they won’t be able to avoid the gut punch that Davies and her bandmates deliver on every song.

Listen to an interview with Pupil Slicer on The Bandcamp Metal Show.

The epic, true metallers in Herzel hail from Brittany, in northwestern France. An extended period of emigration from Britain in the fifth and sixth centuries lent a profound Celtic influence to the region, and Herzel embraces that history on debut album Le Dernier Rempart. For one, their name means “resisting” in the Breton language, a dialect that traces its roots to the Celtic period and is still spoken throughout Brittany. The core of the band’s sound is the classic U.S. power metal of Virgin Steele and Manilla Road, but they infuse it with folk instrumentation and melodies from Brittany’s Celtic past. In pairing that sound with all-French lyrics and a mythical concept about a warrior delivering l’épée des Dieux (“the sword of the gods”) to Brittany, Herzel have uncovered a new angle on the saturated New Wave of Traditional Heavy Metal.

Those of us who are old enough to have flipped through the metal section of CD stores in the early ‘00s will remember the unshakeable primacy of melodic death metal in those days. Amon Amarth, In Flames, and Arch Enemy were huge, and every label seemed to have a half dozen bands that were signed expressly to try to capture their audience. Melodeath has drifted away from the center of the metal discourse in the years since, so it’s a genuine pleasure in 2021 to hear an album like Titans Call, the new LP by the Australian act Valtari. The one-man project of Marty Warren has now released four albums of brilliantly executed melodic death metal. His latest is a Roman Empire epic loosely based on the work of historical fiction author Simon Turney, and it will send you back to both A.D. 64 and A.D. 2003. Warren’s brand of melodeath is not the kind that morphed into mainstream metalcore; he takes a more classicist, sculpted approach, with the moodier songs in the vein of Insomnium or Omnium Gatherum and the more martial ones following in Amon Amarth’s footsteps. It’s all soul-stirring stuff, and a reminder of why so many of us fell in love with this kind of music in the first place.

In their press materials, Isgherurd Morth claim to fuse ’90s second wave black metal to modern blackgaze. You can certainly hear that combination on their debut album, Hellrduk, but it also sells them short. The Siberian/French trio fearlessly ventures into avant-garde territory on every song on the record. The end result is a compositionally adventurous album that recalls the frozen majesty of prog-era Enslaved as much as it does the unsettling beauty-cum-ugliness of a band like Bosse-de-Nage. That makes Hellrduk a challenging listen, but a deeply rewarding one.

With his long-running solo project Mork, native Norwegian Thomas Eriksen has made it his mission to carry the flame of Norwegian second wave black metal into the 21st century. For his fifth full-length, Katedralen, he even enlists Nocturno Culto for a guest vocal spot—probably the ultimate second wave co-sign shy of resurrecting Euronymous to play a solo. Eriksen is adept at homage, and it’s easy to hear bits and pieces of his heroes in these songs, from Darkthrone to Satyricon to Immortal. While Katedralen doesn’t reinvent the wheel, it does stumble on a winning combination of elements. It’s essentially like getting to hear an unreleased mid-’90s Norwegian black metal album with a cleaned-up production job, and who could complain about that?