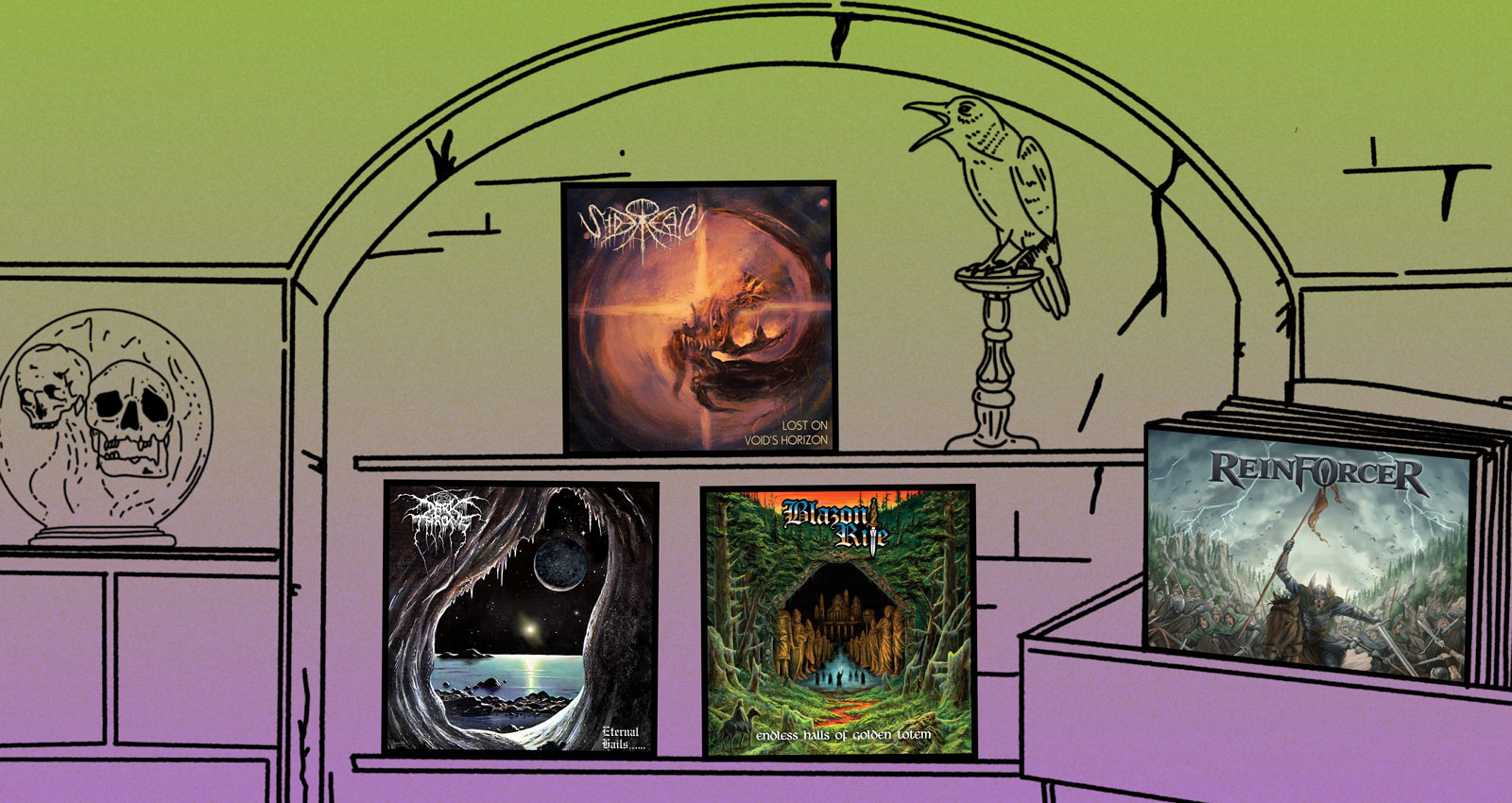 The best metal on Bandcamp in June herald the arrival of summer, with sounds ranging from fantasy-obsessed true metal to spacious experimental black metal to whimsical psych-prog. Bring these albums to the beach and bum out your neighbors.

The traditional heavy metal scene, particularly in America, has become supersaturated over the past decade or so. For sickos like your humble columnist, this is great news. Trad metal is the candy that I will gladly eat until I feel sick. For more casual listeners looking for a way into the genre, it helps if a band has some distinctive qualities that set them apart from the other players in the field. Those individuals owe it to themselves to check out Blazon Rite, a rising Philadelphia outfit whose fantasy-inspired heavy metal satisfies the “traditional” aspect of trad metal, while also finding plenty of room around the edges where they can mess with the template. Endless Halls of Golden Totem is the band’s first full-length, and it’s a huge step up from their solid but down-the-middle debut EP, Dulce Bellum Inexpertis. Guitarists James Kirn and Pierson Roe complement one another’s playing perfectly here, and they brilliantly offset their crunching power chords with clarion lead work. When the tempo picks up, the riffs take on a pseudo-Celtic cadence that recalls Thin Lizzy—or, perhaps more accurately, early Slough Feg. Roe also contributes the dungeon synth parts that serve as one of the album’s calling cards. A handful of signature bands of the current American true metal movement, from Eternal Champion to Sumerlands, have included synth compositions on their albums, but no one has incorporated them into their fist-raising metal songs as well as Blazon Rite. Vocalist Johnny Halladay sounds incredible throughout Endless Halls, sticking mostly to a gruff but deceptively tuneful lower register. He convincingly breathes life into Kirn’s lyrics, which are another highlight of the Blazon Rite experience. An avid Dungeons & Dragons player, Kirn doesn’t settle for retelling the plots of famous works of fantasy in his songs. These are his worlds, and he builds them out masterfully, whether lamenting the plight of the medieval executioner (“Executioner’s Woe”) or rallying the troops tasked with guarding the wall of their kingdom (“The Night Watchmen of Starfall Tower”). All that detailing contributes to a whole that’s much greater than the sum of its parts. Endless Halls of Golden Totem belongs in the pantheon of great true metal albums.

June was a busy month for the Canadian black metal collective Anti-God Hand. Less than three weeks after releasing their debut full-length, Wretch, the band celebrated the summer solstice with X, a 19-minute EP that’s every bit as ambitious as its companion LP. Taken together, Wretch and X announce Anti-God Hand as one of the freshest new voices in black metal. The most striking thing about Wretch is its palpable sense of space. Every song is a miniature world that the listener is invited to live in for a few minutes. The album opens with a full minute of plodding drone guitar before “Forest Outpost” eventually works itself up into a black metal maelstrom. That patient first minute is critical for understanding Anti-God Hand. Every moment of unbridled fury they deliver on Wretch is balanced by a quieter, more meditative moment, and each side of that coin is equally important in building the album’s atmosphere. The three songs on X are more maximalist by comparison, but they still find negative space amid their bigger moments. Late in the runtime of opening track “Enchiridion Thrones,” all the instruments wind down and drop out until all that’s left is a naked drum beat and a dying ember of guitar feedback. Just as you prime yourself to take an extended breath, the band drops into the most rock ‘n’ roll guitar solo they’ve ever committed to tape. It’s that kind of compositional boldness and unpredictability that makes Anti-God Hand so exciting.

The impish UK band Boss Keloid have spent the past decade contorting their elemental stoner doom into something far stranger and more singular. That process has culminated in the delightfully bizarre Family the Smiling Thrush, a psych-prog masterpiece that nods to everything from Mastodon to Graveyard to Yes to YOB without ever sounding like anyone except Boss Keloid. The band’s stoner roots are still evident in Paul Swarbrick’s fat, crunchy guitar tone and Alex Hurst’s gravelly baritone, but both are put to more wide-ranging use here than they ever have before. The interplay between Swarbrick and Hurst’s guitars is one of the album’s great thrills. They weave in and out of one another’s sonic space like cars trading lanes on the freeway. The rhythm section of bassist Liam Pendlebury-Green and drummer Ste Arands does more than just keep up with the twisting and turning guitars. Their work here is a necessary foil, grounding the wilder moments in a rock-solid backbone and providing thrillingly expressionistic flourishes when they’re given center stage. It’s Hurst’s performance as lyricist and vocalist that’s likeliest to catch your ear on first listen. His closest analog in both regards is Neil Fallon. Like the Clutch frontman, Hurst has a penchant for using words for the sheer pleasure of their sound and singing them in an unforgettable way. Family the Smiling Thrush—that title alone gives you some idea of the eccentricity on display here—is full of half-choruses and three-word phrases that will get stuck in your head until subsequent listens help you complete the line. And make no mistake, there will be subsequent listens.

Despite emerging from a scene that wasn’t exactly known for its stability, Norwegian black metal godfathers Nocturno Culto and Fenriz have been treating us to new Darkthrone albums on a regular schedule since 1991. Eternal Hails…… (don’t you dare skip the double ellipsis) is their 19th full-length, which is an astonishing feat before you even consider that it’s really damn good. Darkthrone hasn’t made a straight-up black metal album in a long time, so its a real pleasure to hear how they graft the tropes they helped invent onto their other musical obsessions. Their output since 2006 or so has dabbled in crust punk, hardcore, thrash, trad metal, and doom. Eternal Hails…… borrows ingredients from all of these, but it’s at its best when the tempos drop to a menacing crawl. The brilliantly titled “Hate Cloak” is a grim Sabbathian dirge, and “Lost Arcane City of Uppakra” starts like a Sleep song before resolving into the swirl of woozy synth and marching drums that closes the album. For the 19th consecutive time, Darkthrone have made an album every metalhead should hear. Don’t take that for granted.

De Doorn feels like a rebirth for the Belgian post-doom ensemble AMENRA. For one thing, it isn’t a part of the MASS series that they started in 2003, to which every full-length prior to De Doorn belonged. It’s also the first AMENRA album sung entirely in the band’s native Flemish with Oathbreaker frontwoman Caro Tanghe making her AMENRA debut, playing a pivotal role as its primary vocalist. For a band with such a daunting discography, De Doorn might be the best possible starting point, precisely because you can listen to it without dipping into two decades of AMENRA mythology. That’s not to say it isn’t informed by what came before. If anything, the addition of Tanghe and bassist Tim De Gieter only solidifies the deep community ties that bind AMENRA to the other artists of the Church of Ra collective they founded. The sound of the album, too, feels like a natural progression. Vulnerable beauty and crushing heaviness lie in the same bed across De Doorn’s five movements. People cry at AMENRA shows, and it’s easy to see why. These are big songs, rife with raw emotions and the volume to communicate them. The band takes their collectivist, DIY philosophy from punk and hardcore, and even though their musical template has more in common with bands like Neurosis and Isis, that ethos always shines through.

Slovenia’s Teleport played together for a full decade without making an album. Across a long run of demos, they discovered that their sound was moving toward something more like cosmic death metal than the tech-thrash they made when they first started out. Rechristened as Siderean in 2020, they now finally have a full-length, the ambitious, stargazing Lost on Void’s Horizon. If you like the proggier excursions of Blood Incantation, you should find a lot to like here. The members’ technical chops are all on point, but showboating virtuosity isn’t Siderean’s primary intent. Their compositions are thrillingly exploratory, and in the mysteries of deep space, they’ve found a worthy muse.

Reinforcer
Prince of the Tribes

The quality of a Euro-style power metal album exists in direct proportion to its cheese factor. “Black Sails,” the third song on the debut LP by Germany’s Reinforcer, begins with someone doing a stereotypical pirate voice and quoting dialogue from the Pirates of the Caribbean ride verbatim. I rest my case. (OK, I’ll elaborate a bit: If you have a place in your heart for swaggering, joyous, deeply silly power metal with sugar-rush melodies and histrionic vocals, you will like Prince of the Tribes, and that’s a guarantee.)

Hannes Grossmann
To Where the Light Retreats

Most death metal drummers wouldn’t have the gumption to launch a solo project under their own names, but Hannes Grossmann isn’t most death metal drummers. To Where the Light Retreats is the fourth full-length credited to the insanely prolific German, and its collision of tech-death chops and Gothenburg-style melodies makes it one of the most purely listenable extreme metal albums of the year. After kicking off with the knotty, eight-minute “The Great Designer,” Grossmann and his collaborators launch into “The Sun Eaters,” a pop-death banger on par with the best In Flames songs. Grossmann has played in Obscura, Necrophagist, Hate Eternal, and dozens of other bands, but he never sounds like he’s having more fun than he does on his solo records.