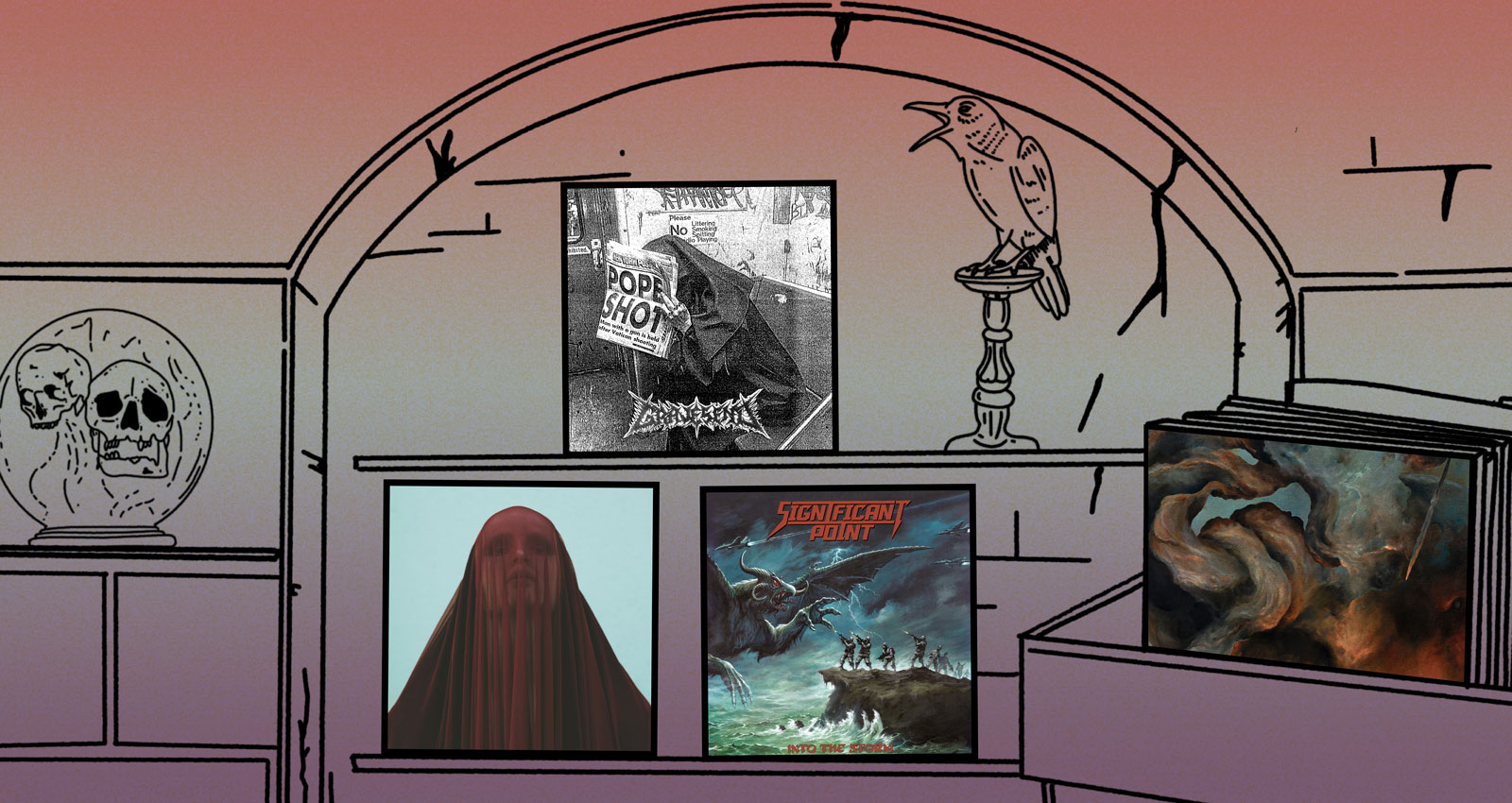 February’s slate of the best metal on Bandcamp is headlined by a quartet of highly accomplished debuts from different corners of the metal world—enka-infused speed metal from Japan, blackened grindcore from New York, swaggering hard rock from Finland, and swampy death metal from Los Angeles.

Significant Point
Into the Storm

The cover of Significant Point’s debut album depicts a winged, horned kaiju descending on a sea-lashed cliff, where a military unit meets it with guns blazing. If this sounds like the cover of an album you’d be into, I’ve got great news—it is. Into the Storm is 44 minutes of red-hot Japanese speed metal, influenced by bands like Metalucifer and Loudness and performed with swaggering self-assurance. Significant Point have already perfected the precarious balance between relentless forward momentum and melodic hooks that’s at the heart of the best speed metal. Into the Storm is thoughtfully composed and sequenced, even as its primary intent is to rip your face off. The title track is the album’s finest song, and its most ambitious. Guitarist Gou Takeuchi wrote the song as a heavy metal interpretation of enka, the pop style that evokes traditional Japanese music and utilizes kobushi, a kind of melismatic vibrato. Session vocalist George Itoh was game for the challenge, and his Japanese-sung vocal runs on the song are rooted in enka but equally inspired by Rob Halford. For good measure, Takeuchi wrote his guitar solo for the song in the style of a classical music concerto. It’s the kind of high-wire act that, on a debut album, announces exactly what kind of band we’re dealing with. Significant Point have proven that they’re the real deal.

The debut LP by anonymous blackened-grind trio, Gravesend, is meant to evoke “a New York of discarded needles, noxious fumes, scavenging rats, broken bottles, and cracked minds.” To the band’s credit, it absolutely does. Methods of Human Disposal is an Abel Ferrara film in audio, a harrowing tour of bad-old-days New York in all its inglorious squalor. The songs are uniformly short and sharp, driven by vicious blastbeats and rabid, barked vocals, and caked in a thick layer of sonic grime. The only breaks from the pummeling are “Fear City” and “Eye for an Eye,” a pair of unsettling, ominous synth tracks that recall Prurient and The Body at their most unhinged. NYC artist types like to complain that the city has lost its edge. Gravesend’s response to that? Be careful what you wish for.

There’s a new Accept album out. It has a song called “Sucks to Be You,” and you really, really don’t need to hear it. If you’re looking for a solid substitute of motivating, Teutonic hard rock, you can do a lot worse than this first album from Finland’s Coronary. Sinbad sounds a lot like prime Accept in midtempo mode, and while it’s not above being gleefully dumb—“Bullet Train” is a dick joke, of course—it at least bothers to fully realize its ideas. Songs like “Firewings” and the surprisingly enlightened mental health anthem “Burnout” are rewarding updates on a strain of ’80s metal that isn’t often honored with such direct homage.

The songs on Swampbeast’s Seven Evils Spawned of Seven Heads sound like they’ve been laying in a burial bog for a thousand years, soaking up death juice. The L.A. trio play a sludge-infused, primitivist death metal that is far more interested in getting ugly than in showing off its chops; plotted on a spectrum of bigger-name U.S. old-school death metal bands, this is closer to Gatecreeper than Blood Incantation. Swampbeast are adept at all tempos, and some of the faster songs even dip into grindcore, but they’re at their best when they drop into a doomy crawl. That really lets the filth percolate.

With their fourth album, the Polish doom-prog band Sunnata have penned a screed against the blind faith some people place in organized religion. “An individual who follows this path will never fully contribute to society and will never be able to share his love in a healthy way,” they say in the album bio. Okay then! It sure seems like someone from Sunnata was screwed-up by the church as a kid, but this is a metal column, not a therapy couch. We’re here to deal with Burning in Heaven, Melting on Earth, so let’s do that. It’s an excellent album full of smoldering, hypnotic riffs and Tool-like polyrhythms, and with wicked, deliberate irony, the band primarily employ chant-style vocals, not unlike what one might hear coming out of a cathedral or monastery.

Keys of Orthanc
Of the Lineage of Kings

As Bandcamp’s unofficial Lord of the Rings beat writer, I’ve been following the Tolkien-inspired black metal band Keys of Orthanc since their debut album dropped in 2018. The Québec duo’s fourth full-length in as many years, Of the Lineage of Kings is their strongest effort yet, bringing together their furious, melodic black metal and their dungeon synth experiments more satisfyingly than ever before. The highlight is “Her Mighty Heart,” a blistering track that retells the story of Éowyn’s vanquishing of the Witch-King of Angmar, a scene also depicted on Stephen Graham Walsh’s stunning cover art. Sarah Kitteringham of Smoulder voices Éowyn’s pivotal monologue, while the band’s maelstrom swirls around her. It has the same exhilarating effect as watching the scene in Peter Jackson’s film or reading it in Tolkien’s book.

The Belgian masters in Alkerdeel have always had a sardonic streak. Their last album, 2016’s Lede, had a farting demon on its creamsicle-orange cover. Their new one, the excellent Slonk, bears the very un-metal image of a rabbit on its sleeve. Hit play, and you’ll find twisted, confounding sludge metal infused with the nihilistic rawness of early black metal. Yet despite that description, the music never feels all that bleak. There’s an almost punk energy that carries these songs, and as dark as they get, they seem to be playing them with a thumb in the eye of what they should be doing.

Officially, the new release by Austin black/death/thrash crew Skeleton is a demo. Maybe that designation grants them cover for the extremely raw production on Ordainment of Divinity, but the ideas here certainly don’t feel half-baked in any way. After the eerie synth intro “Opening Rites,” the band launch into four of the filthiest, most urgent songs they’ve written, titled simply “I,” “II,” “III,” and “IV.” The demo ends with a field recording of artillery fire, an objectively cool sound but also a statement of intent — Skeleton’s aural assault should feel like war.