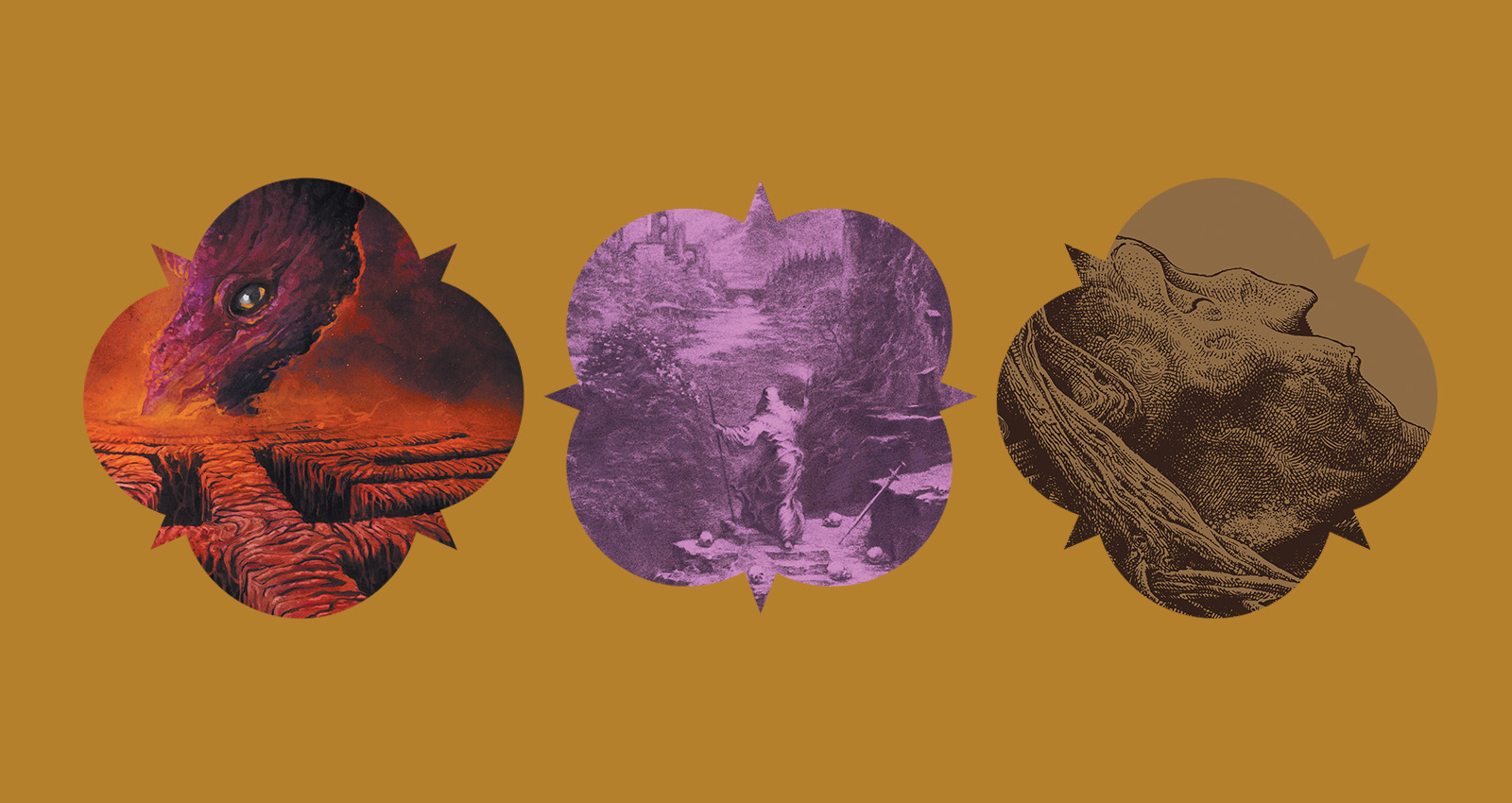 There’s a real sense of momentum around Undeath right now. The Rochester band have blossomed from promising newcomers into rising death metal superstars in just a few short months. (Full disclosure: A profile of the band that I wrote for Stereogum might have been part of that narrative.) In this case, you can believe the hype. The band’s sophomore effort, the brilliantly titled It’s Time…to Rise from the Grave, is easily the best death metal album of the year so far. Undeath have already mastered a skill that few bands ever do: Their songs walk a tightrope between catchiness and brutality, never sacrificing any of their essential hatchet-to-the-head sonic violence in their pursuit of earworms. Guitarist Kyle Beam has a gift for writing death metal riffs that manage to sound primitive, complex, melodic, and bludgeoning all at once, and he threw about a thousand of them into It’s Time. The addition of a second axeman in Jared Welch allowed him to get more creative with interlocking guitar parts, which has a liberating effect on his writing. Lead growler Alexander Jones delivers on his end as well, groaning out blood-curdling gutturals that double as infectious vocal hooks, and the sturdy rhythm section of drummer Matt Browning and bassist Tommy Wall sounds locked in and nimble. Everything Undeath already did well on their 2020 debut, Lesions of a Different Kind, has been tightened up even further on It’s Time. If they once sounded like one of many worthy bands in Cannibal Corpse’s lineage, they now sound more like the heirs to their throne.

Metal’s most inspiring late-career resurgence continues apace—though at the rate they’re going, it might be underestimating Satan to assume it’s late in their career. Back in 2011, the UK band reunited the lineup from their classic 1983 debut, Court in the Act. In the decade since, they’ve released four excellent albums of classic heavy metal. Earth Infernal might be the finest of those records. The band rips through an impressive battery of muscular, dramatic NWOBHM anthems, each one thoughtfully composed and vibrantly executed. The riffs are as melodically complex as ever, the guitar solos jump from the speakers like lightning bolts, and frontman Brian Ross—68 years young!—sings with the pure diaphragmatic power of a man half his age. The lyrics Ross is tasked with bringing to life also sound like the work of a much younger band. Satan are the rare veteran metal act with something to say about our modern political reality. Earth Infernal tackles global warming, conspiracy theories, and the troubling creep of fascism. Satan are the good guys. Let’s hope they stick around forever.

Though they’ve spent the last decade orbiting one another and collaborating with mutual kindred spirits, the Portland blackened doom iconoclast Mizmor and the New Orleans sludge punks in Thou have never made a record together. That makes Myopia, a surprise-release double album that coincided with a performance at this year’s Roadburn Festival, feel like the inevitable culmination of a long courtship. That doesn’t imply that they’re going through the motions, though. Myopia contains some of the most vital, immediate music either band has ever made. Take the album opener, “Prefect,” on which Mizmor pushes Thou deeper into black metal territory than they’ve ever gone. Thou singer Bryan Funck has the kind of goblin-like snarl that’s perfect for the genre, but he rarely gets to run roughshod over triplets and blastbeats the way he does during the first few minutes of this song. Thou have been trending away from metal for a while, letting the core of their sound drift, by turns, toward industrial noise, folk music, and especially ’90s alt-rock. Myopia drags them back. It’s the most explicitly metal Thou record in almost a decade. You can also hear them goading Mizmor into more accessible terrain, augmenting his funereal doom with torrents of Cantrellian melody. An ideal musical collaboration sees both artists bringing out a side of the other that they wouldn’t be able to access on their own. By that metric, Myopia is a smashing success.

It’s been a few years since we’ve heard anything new from the doomy death metal lifers in Autopsy, but a new duo act comprising two of their members has arrived to scratch that itch. Chris Reifert and Greg Wilkinson started Static Abyss “to explore the echoes of insanity manifested through human existence,” and their debut album Labyrinth of Veins certainly sounds insane enough. Reifert’s unmistakable howl is perhaps even more central to Static Abyss than it is to Autopsy, and on songs like “Feasting on Eyes” and “Mandatory Cannibalism,” he sounds like a man slowly losing his grip on reality. Wilkinson is more than game to join Reifert in his descent into madness, dragging him down with grimy, sludgy riffs informed by his time in bands like Brainoil and Laudanum. Autopsy just welcomed Wilkinson into the fold in 2021, so Labyrinth of Veins is the first recorded taste of his chemistry with Reifert. It’s an auspicious start to a musical relationship that will hopefully bear more fruit very soon.

To play deathgrind is to imitate Carcass. The Liverpudlian band’s influence looms so large over the genre they invented that even the finest of their descendants are, at best, trying to make listeners think fondly of Symphonies of Sickness and Necroticism. With that out of the way: Pharmacist are the best Carcass-worshiping band in the world right now. The prolific, Japan-based project formed early in the pandemic, and they already have a dozen releases to their name. Sophomore full-length Flourishing Extremities on Unspoiled Mental Grounds is the most satisfying execution of their vision to date. Its songs are long, complex, and surgically precise, with riffs bobbing and weaving between each other in an endless dance of death. (In that way, it’s more Necroticism than Symphonies.) Pharmacist added Ripped to Shreds guitarist Andrew Lee as a pinch-hitter last year, asking him to contribute lead work to a handful of songs. On Flourishing Extremities, he takes an even bigger role, playing all the solos on the album. The incorporation of his melodic, lyrical shredding suggests an alternate timeline where Joe Satriani joined Carcass after releasing Surfing with the Alien. Lee’s playing is just another way Pharmacist have separated themselves from the glut of superficially similar bands. They may not be the genuine article, but they’re the next best thing.

The stage names of the members of Devil Master are worth sharing in full: Disembody Through Unparalleled Pleasure (bass/vocals), Festering Terror in Deepest Catacomb (drums/keyboards), Darkest Prince (guitar), and Infernal Moonlight Apparition (guitar). Commitment to the bit has never been a problem for the Philly metalpunks, whose penchant for spooky theatrics elevates but never overshadows their rough-and-tumble songcraft. Their second full-length, Ecstasies of Never Ending Night, continues the trajectory that 2019’s Satan Spits on Children of Light began. The grimy tape hiss of the band’s pre-LP era has mostly been excised in favor of brighter melodies and clearer expressions of what the instruments are actually doing. “Funerary Gyre of Dreams and Madness” is built around a bouncy bass solo that could be The Cure just as easily as it could be The Clash, while on “Never Ending Night,” Festering Terror (née Chris Ulsh) pounds out a buoyant drumbeat and invites all the witches to dance atop it, Mortuary Drape-style. Devil Master is still the modern gold standard for grim, goth-y, occasionally goofy black metal. Let’s get ’em on a tour with Lamp of Murmuur.

On August 12, 1985, a Japan Airlines flight carrying 524 souls crashed into Mount Takamagahara, about 125 miles west of Tokyo. Only four passengers survived, making it one of the deadliest air disasters in history. Tamashii No Yama, the fourth album by the Czech band Et Moriemur, reconstructs the story of the doomed flight by tracing its route from the Tokyo airport (album opener “Haneda”) to its final resting place (the 14-minute closing track “Takamagahara”). What transpires between those two fixed points is a lushly orchestrated, often dreamlike suite of avant-garde doom metal. Et Moriemur aren’t concerned with heaviness in the conventional sense; the piano, strings, and traditional shakuhachi they employ are at least as important as the distorted riffs and strangled howls. Every sound on the album is there in service of the atmosphere the band creates, which seeks to evince the profound pain as well as the strange unreality of the Japan Airlines tragedy. In Japanese mythology, Mount Takamagahara is a sacred place, considered to be the home of the heavenly gods. Tamashii No Yama vividly evokes both its holiness and its sorrow.

Te Ruki don’t have much of a local metal scene to call home. In fact, they’re the only active band from French Polynesia listed on Metal Archives. Perhaps that subcultural loneliness explains the singular character of Marako Te Ruki, their fearsome, furious debut LP. Te Ruki sing in Tuamotuan, a Polynesian language with just a few thousand native speakers worldwide. It’s unlikely many people who hear this album will understand the lyrics, but vocalist Aroma puts enough passion into his barking cadence that listeners will get the point. Musically, Te Ruki’s take on black metal is pummeling and martial but augmented with ghostly synths. Much of Marako Te Ruki feels like the Army of the Dead sequence from The Return of the King, relocated to the South Pacific. It rules.