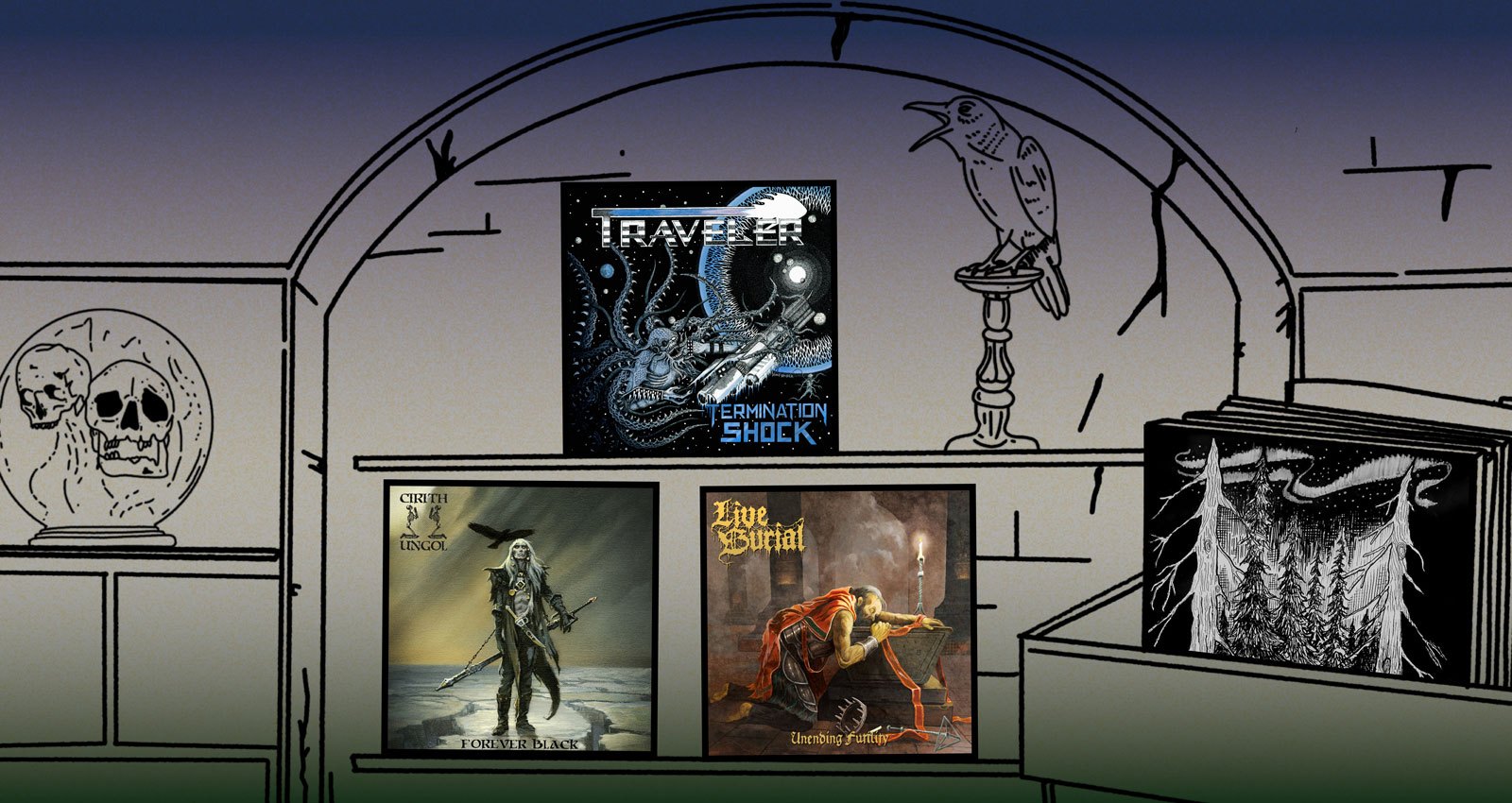 This is too big a philosophical quandary to tackle in a short intro paragraph to a metal recommendations column, but the why of discovering and listening to new music has felt a bit unanswerable lately. If you’re anything like me, you’ve been going back to old favorites a lot in the past month or so. There’s nothing wrong with musical comfort food, and it’s been interesting to examine which familiar sounds I’ve been gravitating to in these troubled times—at the beginning of quarantine, it was a lot of ’90s Gothenburg melodeath; recently, it’s been Alice in Chains. All of that is to say: if you don’t have the mental energy to put toward exploring unfamiliar music, no hard feelings. These eight great records will be waiting for you when you’re ready.

The trad metal band Traveler make a huge leap forward on their sophomore LP, Termination Shock. While the Maiden and Priest worship they executed to perfection on their self-titled debut is still present, the Canadians have emerged as excellent songwriters, with an angle on the true-metal revival that’s entirely their own. Songs like “Diary of a Maiden” (there’s that Maiden worship) and “After the Future” are twisting epics with deft tempo changes and impressive lyrical world-building. Even the more direct bangers—and there are plenty here—are anything but straightforward. There’s something just a little bit off about all the songs here, in the best way possible. Traveler almost never do the expected thing, and it’s almost always the right choice.

It feels trite to crown an album “the soundtrack to the pandemic,” but fuck it, if people are going to do it with Fiona Apple, I’ll do it with Total Fucking Destruction. The Philly trio opens their fifth full-length with “…To Be Alive at the End of the World,” a hypnotic koan not far removed from Al Cisneros’s meditative work in Om, albeit one infused with apocalyptic paranoia. It’s five minutes of calm before another five minutes—and eight tracks—of storm, as the band drops into its familiar brand of schizophrenic, anything-goes grindcore. Richard Hoak is a grind legend for a reason; his pioneering drumming for Brutal Truth laid down a blueprint for the genre that resonates to this day. Hoak drums and sings for Total Fucking Destruction, and while the band can grind with the best of them, it’s really his outlet for whatever creative flights of fancy occur to him. “Sound on Sound” is a minute-long AM radio love song, and “Yelling at Velcro” is just 20 seconds of Hoak yelling, presumably, at Velcro. The album closes with a deranged, atonal version of “The Star Spangled Banner” that sure doesn’t seem to be there because of some vehement patriotism. The pacing of the album seems to mirror the experience of living in the time of Covid (or during the “Attack of the Supervirus 1138,” as one of the album’s finest grind tracks calls it). You start the day with a Zen meditation, then you panic, then you think of love, then you get angry at something mundane, then you turn on the TV and some jackass is waving an American flag. Wash, rinse, repeat, ad infinitum.

The very existence of Forever Black is nothing short of a miracle. Ventura, California’s Cirith Ungol broke up in 1992, following a run of four well-regarded but deeply underground albums of old-school heavy metal. Most of the band walked away from music altogether. They were persuaded to reunite in 2015 by Jarvis Leatherby of Night Demon (who plays bass for Cirith Ungol now), but by then, their chops had diminished to the point that they had to slowly and painstakingly relearn their own material. In five years, they went from nervously dipping a toe back into playing live to being triumphant festival headliners to recording a new full-length, their first in almost 30 years. They haven’t missed a beat. Forever Black is on par with the band’s classics like Frost and Fire and King of the Dead. There’s always been an appealingly working-class grit to Cirith Ungol’s songs. Despite the band’s use of swords-and-sorcery imagery, they always sound like they’re playing in a smoky bar. That keeps songs like “The Frost Monstreme” and “The Fire Divine” from slipping off into the fantastical ether, forever anchored as they are by the power of the riff.

A Blade Runner-themed album by a band named for a Ghostbusters II character shouldn’t be this good. Yet with Danse de Noir, Germany’s Lord Vigo have crafted one of the finest doom records of 2020. Though they were founded as a fairly straightforward epic doom band, for their third album, they’ve incorporated bouncy goth and deathrock into their sound. That proves to be a brilliant move. The songs here are more memorable than many in the epic doom genre in recent memory. The sharp “Between Despair and Ecstasy” sounds like the second coming of Ghost’s pop-metal gem “Square Hammer,” and longer compositions like the title track and “Memento Mori” cry out for lighters-aloft live singalongs—assuming we get back to those at some point.

Here’s a little secret: it’s not that hard to find solid old-school death metal. The genre conventions are so well-established that competent musicians who set their mind to it can usually come up with a pretty good album. But when a band really nails it and all the pieces fall into place, OSDM can still be one of the most purely enjoyable listening experiences out there. Live Burial really nail it on Unending Futility, the UK band’s second album. Their label, the ever-reliable Transcending Obscurity, list the following bands in the “for fans of” section: early Asphyx, Morgoth, Death, Cancer, Gruesome, Skeletal Remains, Bolt Thrower, and Unleashed. You can clearly hear all of that in here. It might not be greater than the sum of its parts, but with parts that great, does it really need to be?

As they proved earlier this year on their Best Metal on Bandcamp-approved track “Death in Heels on Wheels,” Road Warrior have the whole shtick-y, underground NWOBHM thing down to a science. Mach II truly sounds like it could have come out on a tiny London label in 1981. It just happens to be coming out of Australia in 2020. Road Warrior don’t reinvent the chrome-plated, tank-treaded wheel here, but they do seem to be having an awful lot of fun playing these songs. If you want chugging riffs, galloping bass, and histrionic vocals on songs with tongue-in-cheek titles—I’m partial to “Tonight’s the Nightmare” and “Thunder n’ Fighting”—you can’t do much better than this.

Funeral Leech’s debut album delivers dark, ugly death/doom from the heart of New York City. Its sole intention is to create a bleak atmosphere, and it does that brilliantly. Every song is built around the thudding drums and guttural vocals of Lucas Anderson, who growls his “ghastly hallucinations from beyond the living world” from behind the kit. He’s flanked by the driving, insistent riffs of Zach Chumley and Alex Baldwin (formerly of fellow NYC miserabilists, Mortals). Get sucked into Funeral Leech’s vortex of negativity for a depressive good time.

The two-song, 10-minute new EP by Austin Lunn’s Panopticon project is a relatively minor release by his standards, but it’s no less essential for it. Lunn recorded new electric versions of the acoustic Panopticon classics “Beast Rider” and “Norwegian Nights,” and he’s giving all proceeds from the EP to musicians who have been forced to cancel tours in the wake of the pandemic. The songs are great on their own, but most Panopticon fans will be equally stoked on the note Lunn added in the description of the release: “ps. I promise the next few releases, including the new album I have been working on for over a year, are metal as hell. Panopticon is and will always be primarily a metal band. I just get a little side tracked sometimes…” We’ll be waiting here patiently, Austin.