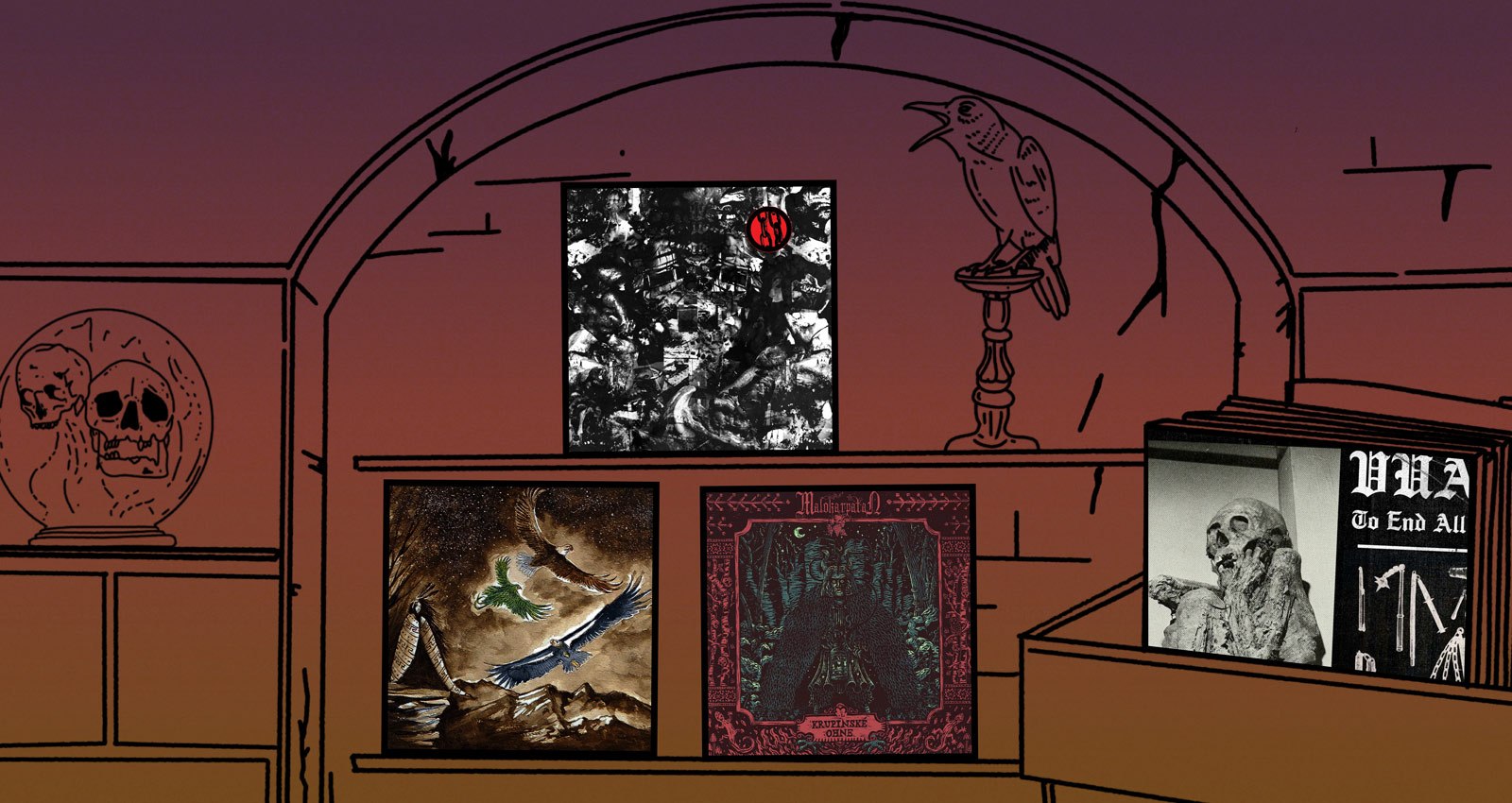 I’ll keep my intro extremely brief this month: be safe, be healthy, and listen to metal. Here are some new albums to help get you through.

There’s something happening in the dark forests of Slovakia, and Malokarpatan perfectly channel it in their singular old-school black/trad metal magick. The band creates an atmosphere on Krupinské ohne that feels truly ancient, hewn from the pines and firs of their homeland. The heavy metal-derived riffing and snaking compositions recall the anything-goes black metal of bands like Master’s Hammer and Mortuary Drape, but the sound is truly Malokarpatan’s own, and three albums in, it’s a sound they’ve perfected. On Krupinské ohne, the band tackles longer songs than ever before, and each one feels like a complete mythos unto itself. They dart from first-wave black metal madness to eerie Slovak folk music to ’70s hard rock vamping with confidence and ease, always in service of the song. Bonus points for that album cover, which is objectively one of the coolest pieces of metal art of the year, and looks exactly how the music sounds.

If you’re a disciple of the work of one Mr. Abbath Doom Occulta, you’re going to like the debut album from San Francisco’s Nite. The DNA of Abbath’s work in Immortal, his solo records, and most instructively, the short-lived supergroup I, is all over Darkness Silence Mirror Flame. This is black metal with a decidedly rock n’ roll sensibility. These songs don’t reinvent the wheel; they’re all basically built around chugging midtempo riffs, guitar-hero shredding, and Van Labrakis’ raspy vocals. It’s within that basic template that the band finds some truly great songs. The opening one-two punch of “Genesis” and “The Way” sets the mission statement for the record, and mid-album centerpiece “Night Terrors” represents the platonic ideal of the trad/black hybrid. “Bright” is a departure, starting as a slow-burning, brooding ballad that casts Labrakis as torch singer before erupting into guitar pyrotechnics for its dramatic final act. Abbath smiles down from Blashyrkh.

VUAL
To End All Life

Without getting too topical, let’s assume you might be in the market for an ugly, fucked-up, misanthropic record right now. Look no further than To End All Life, the debut album from depressive black/sludge duo VUAL. Subtitled “A Conspiracy Against Mankind in Six Parts,” the album is every bit as nasty as advertised. It’s a 95-mph fastball of negative energy hurled at your noggin, “a gob of spit in the face of Art,” in the words of Henry Miller. The lyrics are all inspired by the work of horror writer Thomas Ligotti, himself a mad prophet of misanthropy. The way the songs unfurl feels almost stream-of-consciousness, a sense that’s aided by the street-corner-ranting vocals. A lot of bands in the sludge milieu fall in love with slow tempos and rumbling low-end, but both are deployed sparingly here and only when necessary. When the songs demand a bit of deranged melody or a burst of forward momentum, the band calls it up. Waging war on the human plague demands versatility.

This EP is a victory lap for Smoulder, the Canadian epic doom band who conquered the true-metal world with last year’s Times of Obscene Evil and Wild Daring. Dream Quest Ends feels like the natural closing of a chapter for the band, as well as a glimpse of what might come next. The title track is the band’s most ambitious composition yet, an epic in miniature highlighted by thrilling tempo changes and dueling vocals. “Warrior Witch of Hell” is an overflowing cornucopia of riffs, with frontwoman Sarah Kitteringham delivering what might be her most impressive vocal performance to date. The EP ends with “Cage of Mirrors,” a gender-swapped cover of the killer Manilla Road song from their 1982 album Metal. It’s more than worthy of Mark “The Shark” Shelton, to whom the EP is dedicated, and it leaves us eagerly awaiting whatever Smoulder has up their sleeves next.

Ixachitlan open their debut EP, Eagle, Quetzal, and Condor, with 91 seconds of Native American flute and drums without a trace of metal instrumentation. Consider it a moment to catch your breath before confronting the band’s stirring atmospheric black metal epics. The past decade has seen a multitude of bands infusing black metal with the native folk music of the Americas, and Ixachitlan do it better than most. Eagle, Quetzal, and Condor is dedicated to “all the indigenous people of this brown continent, from the north to the south to the east and the west,” and on songs like the stunning “This Land Belongs to Us,” you feel the full force of that dedication. Contributing to the cultural history of the indigenous peoples of America means everything to Ixachitlan, and you can hear it in every note.

Velnias work slowly. Scion of Aether is the Colorado-via-Chicago band’s third album since forming in 2006, and their first in eight years. The songs here unfold just as deliberately. Velnias belong to the slow-build post-metal wing of atmospheric black metal, and they still know their way around a crescendo. Their new album is built around four long songs that could almost pass for extended Russian Circles jams with black metal vocals. It’s a formula, sure, but it’s one that works for them, and they’re among the best bands doing it right now.

Nox Formulae hail from Greece, a country with a rich and unique black metal tradition. The band’s sophomore album, Drakon Darshan Satan, fits under the broad umbrella of Hellenic black metal, but it often feels much more extreme than the classic interpretation of that sound. The signature howled vocals and melodic riffing are present, but they’re set in a lightless void, and underpinned by drums that frequently break into furious blast beats. The melodies do shine through, though, and on songs like “The Black Stone of Satan,” the band even manages to be legitimately catchy. Essentially, if you take late-era Varathron, turn down the fun knob, and increase the evil factor, you get Nox Formulae.

Mike Rekevics is probably the all-time MVP of this column. He appeared twice on 2019’s year-end list as a member of both Yellow Eyes and Vanum, and he’s a part of a half dozen other quality projects besides, including the mighty Ruin Lust. Choir of Babel is that band’s third album, and it lives on the extreme fringes of black and death metal sometimes referred to as “war metal.” Whereas a lot of war metal is all about sonic filth, the instruments on Choir of Babel are for the most part intelligible. The writing and performances are pushed to the bleeding edge, but Rekevics and his bandmates want you to hear exactly how they’re pummeling you.