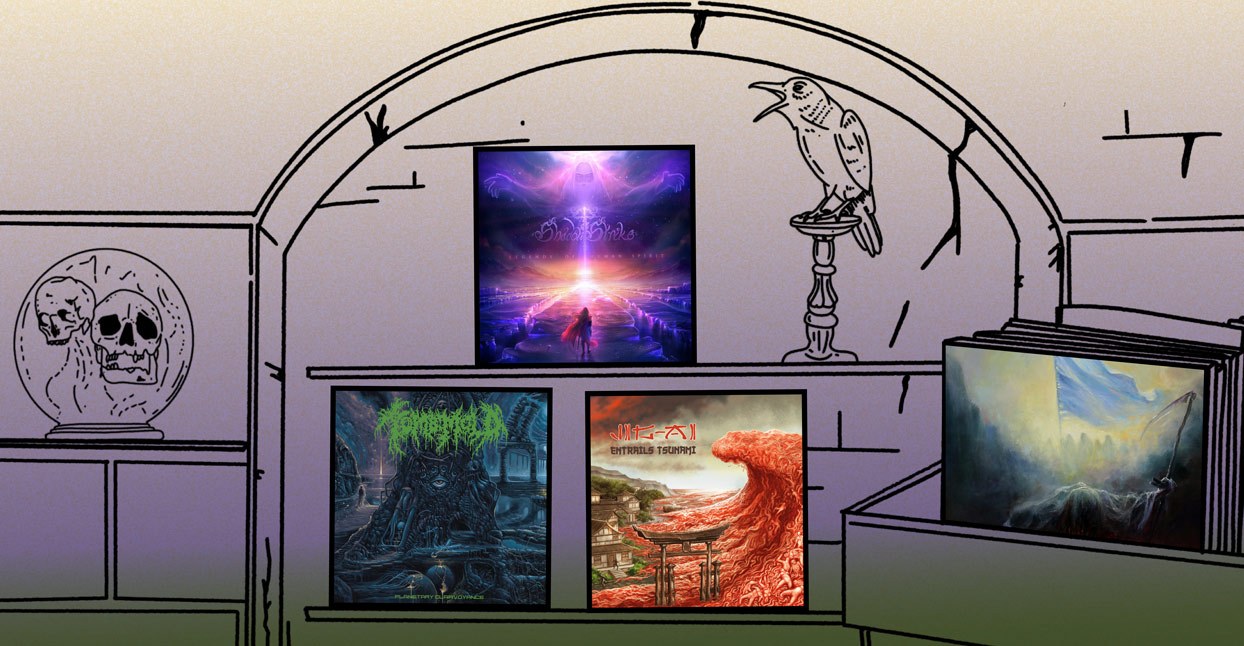 A compilation with three hours of envelope-pushing metal, punk, hardcore, dark folk, and noise music for five bucks would be a must-buy even if it wasn’t for a good cause, but when you buy Riffs for Reproductive Justice, you aren’t just buying the riffs. Every penny that this comp makes goes to the National Network of Abortion Funds and the Yellowhammer Fund, two organizations that are on the front lines of direct support for reproductive health. The writer and activist Kim Kelly got some of her most accomplished friends in the scene to contribute tracks for the release, so you’ll be treated to rare and unreleased music from the likes of False, Jucifer, Immortal Bird, Thou, Woe, and many more. (It’s also worth noting that you can contribute as much as you like, not just the $5 minimum.)

Three years, three full-lengths, three immortal entries into the canon of 21st century death metal. Toronto’s Tomb Mold are absolutely dominating their genre while maintaining a grueling rate of productivity. The band follows 2017’s Primordial Malignity and last year’s Manor of Infinite Forms with an album that’s marginally more technical and experimental (that acoustic break in “Beg for Life”!) than its predecessors, but doesn’t sacrifice a bit of their breakneck riffage. Every song on Planetary Clairvoyance has at least two or three riffs that will stick around inside your head for days—and in death metal, that’s the only true currency. The music is complemented by the compelling lyrics, which use science-fiction metaphors to explore the very human plight of possessing a mind and body that are constantly decaying. Manor of Infinite Forms often felt like a sweltering interpretation of Lovecraftian terror. Planetary Clairvoyance feels like a death sentence—travel as deep into space as you like, the reaper awaits us all.

Among the many welcome surprises provided by ShadowStrike’s debut album, the biggest might be the fact that they are from Long Island. If Legends of Human Spirit was a record by a Finnish band who came up in the shadow of Sonata Arctica, or a Swedish band who worshiped Hammerfall, or even an English band who sought to recreate DragonForce’s success, that would make perfect sense. But no, this 65-minute marathon of soaring vocals, shredding guitars, synthesized strings, and ambiguously-accented voiceover parts is from the spiritual homeland of the meathead hardcore matinee. Nevertheless: If you love classic Euro-style power metal, records this satisfying don’t come around very often. Frontman Matt Krais has a firm grasp on the theatrics required of a singer in this genre, and he leads the band into battle on songs like “Heart for Yearning Journey” and “Where Sleeping Gods Await” with a grandiloquent, heartrendingly earnest falsetto. It’s hard to imagine this won’t be the best power metal album of the year when all is said and done.

When the man behind the greatest black metal album of all time [https://osmoseproductions.bandcamp.com/album/at-the-heart-of-winter] makes a new record, there’s a journalistic obligation to cover it. Outstrider is the second solo LP by the Norwegian demon born Olve Eikemo but known to all denizens of Blashyrkh as Abbath Doom Occulta. While it’s not a masterpiece, it is an unfiltered expression of Abbathian id. Abbath’s comfort zone is black metal at its most rock n’ roll, and on Outstrider, Abbath embraces the dual role of guitar hero and Lemmy-worshiping frontman. It’s a total blast, even if the grim and frostbitten edge of his earlier work in Immortal is missing.

For more than a decade, Prague’s Jig-Ai has been delivering the goods—if “the goods” are gloriously ignorant goregrind albums inspired by a bizarre B-movie version of feudal Japan. Entrails Tsunami—and, honestly, let’s just say that again: Entrails Tsunami—is 21 songs and 24 minutes of warp-speed grindcore riffs, blastbeats, and pig-belch vocals. For playing music this transparently dumb, Jig-Ai are probably underrated as musicians. The technical skill and level of dedication it takes to blast through these minute-long songs in total lockstep shouldn’t be overlooked. Some kids take up chess. Some kids get together and write songs called “Shuriken Facelift” and “Impaled by Swordfish.” Who’s to say which is better?

Adam Kalmbach is legitimately doing things with composition that no one else in metal—or in music, to my knowledge—is doing. I’ve tried to write about exactly what he’s doing before with limited success, so let’s instead address the end result: Birefringence, like most of the many, many Jute Gyte albums, is black metal at its least naturalistic. By imposing arcane rules about rhythm, pitch, sequence, and time signature onto his compositions, Kalmbach sounds intentionally strangled. He forces himself into a box with no tools to get out. He utilizes the sonic palette of black metal, but his songs sound like the work of someone with no knowledge of the genre’s cultural history. It’s truly mind-bending to hear something so familiar and yet so alien. Predictably, that makes Birefringence a difficult album to get your head around. Hell, I’m still trying to unlock the excellent Oviri album from two years ago. But if you want to truly expand your mind and test your understanding of what black metal can and should be, get to work.

If only all brutal technical death metal came packaged in snack-sized bursts. The new EP from the Spanish tech-death institution Wormed clocks in at just 16 minutes, a length at which its monochrome, off-kilter riffing and gurgling vocals can be easily digested. A lot of the music in this microgenre is obsessed with science fiction, and indeed, Metaportal can feel like it was made by a soulless piece of robotics, especially as closing track “E-XYSTEM://CE” draws to its Scanners-finale conclusion. That uncanny artificiality actually bolsters the music rather than hindering it. Humans had to come up with this stuff, but only machines can take it to its logical extreme.

When the Minneapolis-based False released their untitled 2015 debut album, the presence of haunted-house synthesizers made Emperor the main point of reference for critics. With the benefit of hindsight, that was never totally fair. That synth is a key part of the band’s sound, but they aren’t beholden to the tropes of the Norwegian Second Wave, and the rest of their sound can be considered an evolution of post-Weakling USBM. On Portent, they stray even further from the dogma of genre canon. They seem to have really found themselves on the three main songs that comprise the bulk of the record, each one a 10+ minute epic, rich with atmosphere and full of gnarled twists and turns. The synth still orients the album as a distant cousin of symphonic black metal, but they’ve far outgrown the trite Emperor comparisons. It’s been a thrill to hear them grow.