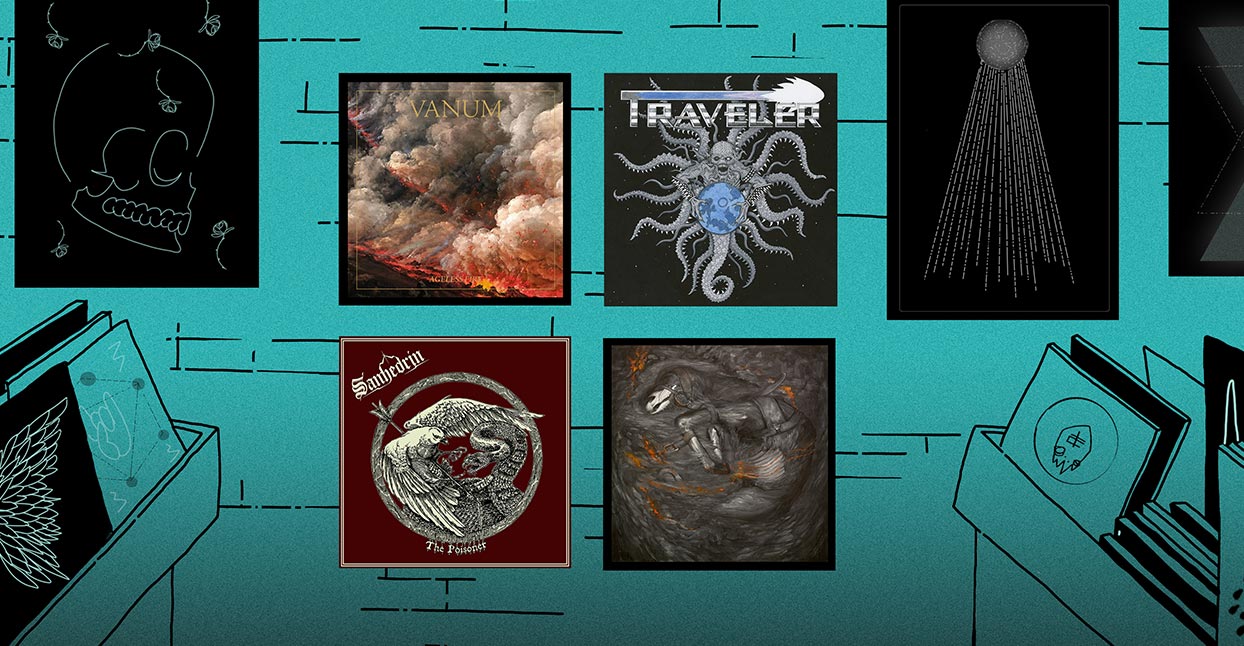 February delivered an embarrassment of black metal riches, with albums that would rank among most years’ best, from bands in France, Sweden, Greece, and the United States. Those are included below alongside a pair of crucial entries in the still-raging trad metal revival.

We’re a half-decade into the latest trad metal revival, and new bands continue to raise the stakes. File the self-titled debut by Canada’s Traveler alongside the likes of Sumerlands, Eternal Champion, and Visigoth at the apex of the scene. Their reference points are boldly explicit — “Starbreaker” name-drops Sin After Sin—the Judas Priest album that houses that band’s own song called “Starbreaker”—and “Behind the Iron” is the most accurate Iron Maiden cosplay I’ve heard in years. Frontman Jean-Pierre Abboud brings the songs to life with a gloriously dirtied-up Rob Halford homage that might make you miss Ripper Owens. Despite the hero worship, Traveler manage to carve their own lane, finding a perfect balance between rough-and-tumble NWOBHM and soaring, epic beauty. That approach is encapsulated on “Mindless Maze,” a candidate for the best song of 2019 so far. A gorgeous clean guitar intro gives way to a cavalcade of stomping riffs, and Abboud’s best vocal performance on the album sells the song’s massive chorus.

Patience is the key to appreciating Nasheim, the atmospheric black metal project of Swedish musician Erik Grahn. It requires patience at the macro level: It’s been five years since Grahn released Nasheim’s debut LP Solens vemod, and there wasn’t a whisper of activity from him between then and the January announcement of Jord och aska. It also requires patience as a listener. Jord och aska—Swedish for “soil and ash”—is just three songs, two of which crack the 16-minute mark. Long, forlorn silences separate methodically picked notes. The first recognizably black metal sound comes nearly six minutes into the album. Grahn has made an album that asks for close listening, and he rewards those who take the time with achingly beautiful atmospheric black metal. He doesn’t reinvent the genre, but when every slow-building crescendo resolves into such satisfying flurries of perfectly placed tremolo-picked notes, it’s hard to complain.

Sanhedrin’s A Funeral for the World made this column back in 2017, and I compared their debut LP to “a gritty tableau of a pack of smokes, a case of beer, a fringed leather jacket, and a Gibson SG.” That’s still the core of their sound, but on The Poisoner, the Brooklyn trio balances their hard rock swagger with real pathos. The title track is a brooding, doom-tinged epic in which frontwoman Erica Stolz points an accusing finger at a toxic presence in her life: “You are the poisoner / Twisting words into poison.” The band follows that with “The Getaway,” a galloping NWOBHM rocker that might be about the same person, and lends their story a tragic depth: “You’re in love with needle and spoon / You think you rule the night / And it’s messing up your life.” In making their music a vehicle for the universal, helpless frustration of watching addiction ravage a loved one, Sanhedrin have highlighted heavy metal’s great power to make its fans feel a part of something.

Panopticon
The Crescendo of Dusk

The two-hour runtime of last year’s The Scars of Man on the Once Nameless Wilderness might make The Crescendo of Dusk seem slight at two tracks and 22 minutes, but rest assured, it’s essential Panopticon. The title track was written and recorded during the Scars of Man sessions, and it would have had a case as the best black metal song on the album had Austin Lunn chosen to include it. The first half of the song is a propulsive, melodic black metal onslaught, but it transforms into something much stranger. Lunn’s vocals evoke a kind of religious, ecstatic chanting before the song hits its triumphant closing passage. B-side “The Labyrinth” was recorded during the Autumn Eternal sessions, but its winding spoken-word incantation would have been at home on the country/Americana half of Scars of Man. Never sleep on a Panopticon release, even a seemingly minor one.

The sophomore album by Funereal Presence is the result of a truly uncompromising vision. Sole member Bestial Devotion (also of Negative Plane) cites the maxim “black metal shall be gruesome, ugly, and cold” in the album’s liner notes, but that makes Achatius sound far more orthodox than it is. Its four songs follow Bestial Devotion’s muse wherever it takes him, through labyrinthine mazes of buzzsaw riffage, folk-inflected acoustic passages, and eerie church-bell melodies. The most old-school thing about the record is the way it treats black metal as an aesthetic framework, but not a compositional guide. The songs on Achatius aren’t obeying some logical blueprint, yet they’re undeniably black metal. Go all the way back to the genre’s origins and you’ll hear Bathory exhilaratingly making it up as they go along. That’s the beating heart of Funereal Presence, too.

As co-founders of the Hellenic black metal sound that emerged from Greece in the late ’80s, Rotting Christ will always be legends. The Heretics is their 13th studio album, and while it occasionally veers into irredeemably cheesy territory with extended spoken word bits, it’s another solid release by a band that has stuck to its guns for 32 years and counting. Rotting Christ pioneered the style of mid-paced, melodic riffing that characterizes the Hellenic sound, and it’s deeply satisfying to hear them bust out new variations on their old tricks. The Heretics is a worthy companion piece to Varathron’s Patriarchs of Evil, another late-career revelation by Hellenic forefathers.

For at least the fifth year in a row, Mike Rekevics (Fell Voices, Vilkacis, Yellow Eyes) is throwing his hat in the American black metal MVP race. On Vanum’s sophomore LP Ageless Fire, Rekevics and his bandmates conjure a powerful vision of black-metal-as-battle-hymn, propelled ever forward by martial drums, galloping riffs, and bellowing vocals. The album sounds triumphant, but it feels like a pyrrhic triumph, earned with blood. There’s a melancholy that underpins Ageless Fire, even at its most exultant, and it imbues the album with the emotional complexity that’s key to its success.