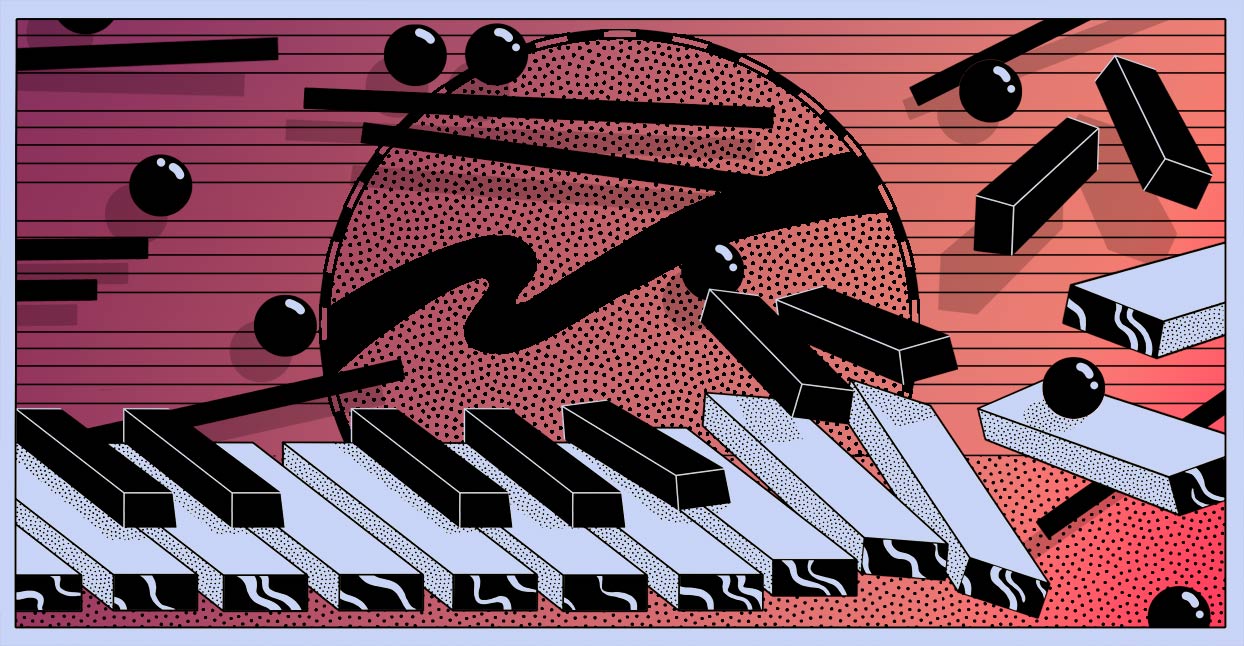 It’s not unusual for February to signal the true start of the new year of releases. In terms of quality, it’s typically a deep month. But this year, it’s out of control. I could pretty much copy-paste this column into my Best of 2019 submission, word for word, and have a list that is as strong as anybody’s out there. Every single one of these recordings is special. 2019 is off to a great start.

Like a childhood fairy tale, the music of Allison Miller’s Boom Tic Boom is never as it seems. The drummer’s lyricism has a dreamlike quality, where strange and curious melodies emerge in unpredictable ways and an emanate an elusive familiarity, like a forgotten memory. Her new release Glitter Wolf doesn’t stray from the successful formula that fueled her 2016 Boom Tic Boom release Otis Was A Polar Bear, but the inspirations that generate the unorthodox sounds and vivid imagery show that there’s still more mystery to be revealed.

It is a perpetual source of fascination how Anna Webber shapes melodies by placing them under the duress of rhythmic motion. It’s not just that those shapes seem rendered as the result of some alien geometry, it’s that they’re revealed with an ever-changing time lapse that doesn’t exactly scream of this world. Her latest captures moments and passages from the percussion-focused works of her favorite 20th century composers and gives them a new and different life in the framework of her own, singular perspective. She’s joined by musicians who are also quite singular: pianist Matt Mitchell, cellist Christopher Hoffman, saxophonist Jeremy Viner, trombonist Jacob Garchik, bassist Chris Tordini, and drummer-percussionist Ches Smith.

Back in March 2017, Angel Bat Dawid released a set of solo tunes that were striking because they were so intimate and heartfelt, and in the way unguarded emotions expressed through melody connected like a jolt of electricity. Her new release The Oracle is cut from the same cloth. Recorded while on the road in various locales, as well as in the attic of her home in Chicago’s Bronzeville neighborhood, they confer the same closeness that marked 2017’s The Joy of Living. The album is subtly marked by the influences of free jazz, cosmic, modern jazz, and blues, but the nature of a solo recording is that the personality of the musician eclipses the push of the genre. The Oracle is an outstanding example of this truth.

There’s a rhythmic quality to the latest from Theon Cross that suggests time travel via dance steps. There’s no mistaking the tubist’s trio session with drummer Moses Boyd and saxophonist Nubya Garcia (plus guests) as belonging to anywhere other than the vibrant U.K. scene, but there are both motion and melodic phrasings that echo the long-ago sounds bouncing down the avenues of New Orleans. That sense of something old with something new is always a potent combination, especially in the context of a jazz lineage. It’s also a pretty good equation for some very fun music.

Well, it’s definitely not empty talk when Drew Williams cites the graphic novel Saga as the inspiration for the Wing Walker Orchestra’s debut. Hazel reflects more story narrative than song structure; melodies embody the conflicting nature of characters, and tempos chart the unexpected plot twists. The sign of the album’s success, however, isn’t the music’s shadowing of a story, but the ensemble’s dexterity in bringing a cohesive presentation to an epic vision. It helps to have a crew of all-stars that include names like Marta Sánchez, Eric Trudel, Nathan Ellman-Bell, and John Blevins to pull it off. It’s a hell of a debut.

After listening to this album, it’s fair to ask: How is this only a sextet? The massive sound of Obelisk can be a bit deceiving. The blend of post-rock and modern jazz creates an environment in which melodies a mile wide can shine as bright as the sun, and harmonies swell up and carry everything away in their warm embrace. And drummer Graham Costello doesn’t let up for the entirety of his debut; the unrelenting waves of cinematic imagery accrue an intensity that never seems to level off, even after the last note has faded.

It won’t take much convincing to believe that Quinsin Nachoff’s newest is inspired by a total solar eclipse. Every bit of this sprawling epic radiates the kind of wonderment associated with the witnessing of celestial events. The effect is benefited by Nachoff’s recent immersion into a world of keyboards, and the ways their shimmering textures of harmony envelop the music’s brightly flickering melodies. Saxophonist David Binney, pianist Matt Mitchell, percussionist Kenny Wollesen, and drummer Nate Wood join the saxophonist on one of the most stunning projects to see the light of day thus far in 2019.

This album has the odd grace, playful attitude, and peaceful interludes one would expect from an homage to the great Jimmy Giuffre. Pianist Lucian Ban and clarinetist Alex Simu give it a solemn atmosphere, too, yielding the impression of musicians who respect Giuffre and his music. This is an album for a tranquil Sunday afternoon, when you need something to accompany the daylight spilling across the room and the gentle snoring of cats dozing nearby.

This album lives at the fringes of the storm’s eye. The volatility of improvisation exerts its will upon the pieces, battering them in all directions. Meanwhile, a melodic tranquility hangs tantalizingly at the edges of things, even momentarily taking control. Pianist Luca Sguera’s quartet guides the warring influences into an uneasy alliance, where conflict and cohesion both play their part in a state of contradiction that yields an unending supply of intense sonic feedback.

And here’s a selection of an old album that’s new to Bandcamp:

The guitar and saxophone duo of Brian Citro and Charles Gorczynski are vanguards of the post-jazz sound, infusing their improvisational approaches with heavy doses of electronics and ambient melodic reveries bordering, at times, on drone. This live 2010 EP serves as a nice introduction to their music. Hopefully, the recent drop of old albums on Bandcamp will continue. If The Door ever hits, buy that one immediately. And as point of reference, Gorczynski is a member of Colorlist, which should give you a good sense of how Salamander maps out its works.