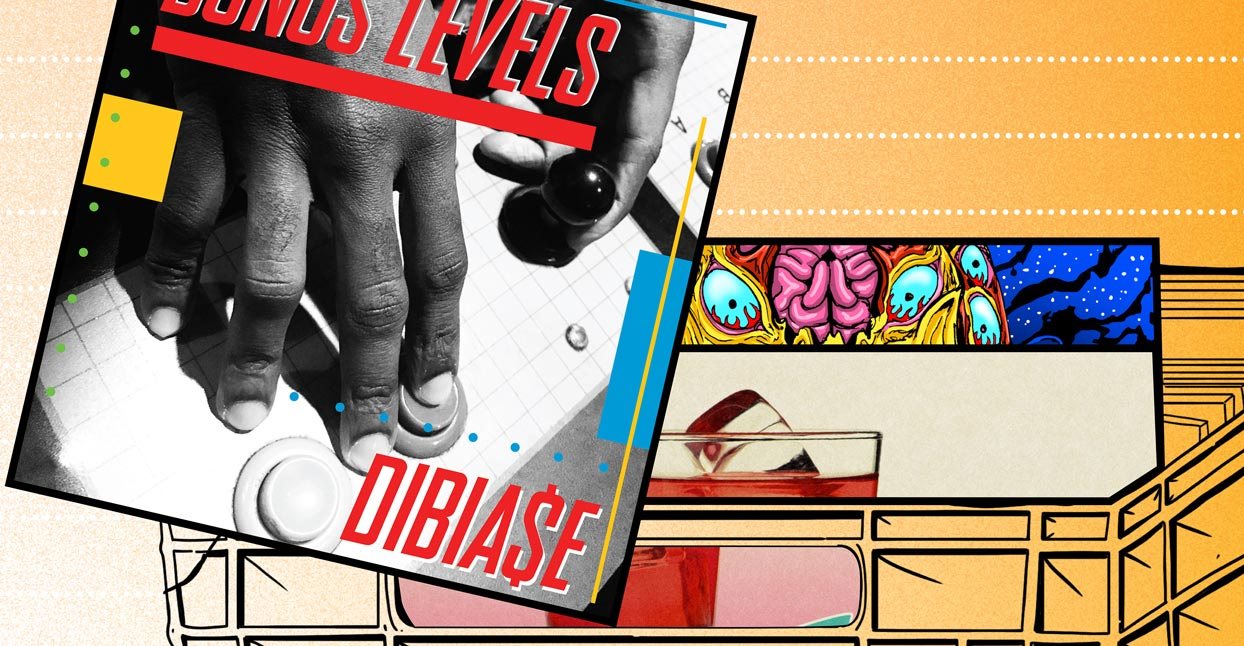 A 12-track collaboration between Detroit rapper Big Tone and producer House Shoes, Big Shoes centers around musical and personal legacies. Pledging integrity to the concept from the get-go, the Tone recaps his grassroots come-up as an MC over waves of synths on opening track “Bio (Timeline Part 1)”; he revisits that same story on the static-coated closing cut “True Story (Timeline Part 2),” saluting family and friends who’ve accompanied him along his journey through life and music. Guest MCs Denmark Vessey, Quelle Chris, and Blu also bless the project, with the latter joining the host on the string-helmed “Beautiful Mind,” which includes Tone capturing the heart of the album by relaying how he’s humbled when “people recognize my mission.”

Che Noir
The Thrill of the Hunt 2

Following in the gritty footsteps of her Buffalo brethren—namely Conway, Westside Gunn, and Benny the Butcher—Che Noir reports from the underbelly of the city with rhymes inspired by the code of the drug game. Entirely produced by neighboring Rochester artist 38 Spesh, The Thrill Of The Hunt 2 lays down a foundation of soul-samplings beats that the self-proclaimed “Queen of Upstate” blesses with flows that bring to mind the no-holds-barred ‘90s raps of Nonchalant and Boss. On the taut and nervy “Spin The Bottle,” Che sketches out the parameters of her world: “We was trying to find peace in the city—was like digging for fossils / Put my enemies in a circle / I can’t decide who I want to kill first so, fuck it, we’re playing spin the bottle.” These grisly threats are balanced by the MC’s more reflective side, which emerges towards the end of the album on the bittersweet, guitar-infused “Sand Castles” and the bluesy “Today,” where she kicks a mature relationship lament against a muted trumpet backdrop.

Canadian DJ Chong Wizard’s guest-heavy Infinity Stones series of EPs are becoming a savvy cheat sheet to the most vibrant figures in the modern underground rap scene. This fourth installment—which displays a vivid comic book cover art courtesy of Rob Israel—kicks off with charismatic Chicago spitter Vic Spencer and Manchester, U.K. chanteuse El Ay joining forces over Ro Data’s double bass-propelled beat for “The Return Of Soopaman Luva.” New York connections proceed to come to the fore on The Soul Stone, with Rochester representers M.A.V. and Rigz laying down bars on the flute-infused “Red, Black & White,” and Jamal Gasol, Lissan’dro, and Rasheed Chappell taking turns to spit over the broody, piano-spiked “The Trilogy.”

California-based beatsmith DIBIA$E’s Bonus Levels is a cut above the average video game-inspired project. Sure, you can play “spot the throwback sample”—across the album, the producer repurposes 8- and 16-bit Nintendo and Sega soundtracks into dusty cartridge funk—but it’s the nuanced production that’s the real draw. DIBIA$E’s kicks and snares hit home with real heft and sizzle, matching up with the jagged, pixelated texture of the chiptune riffs; verbal grabs pep up the tracks, including Busta Rhymes’s trademark “Yo!” and “Ha!” peppering the dreamy “Last Wave.” Fellow beatmakers 14KT and Elaquent contribute remixes to “Castlevania” and “Metroid” respectively. It’s all skillfully stitched together with archived advertising and news dialogues, including Nintendo’s Virtual Boy proclamation, “You’ve gotta play it, you’ve gotta have it, you’ve got a reputation—now you’re playing with power.” Mario approves.

The Good People
The Summer EP

The Good People consists of Emskee and The Saint. As a duo, they favor vintage boom-bap drums and craft beats from meticulously dug soul, jazz, and funk samples. Lyrically, they’re out to “eschew the violence and misogyny” that runs through certain strains of hip-hop. But don’t think there’s anything self-righteous about The Summer EP—it quickly delights as the easygoing soundtrack to your next sun-blissed hang-out session. Opener “Windows Down” co-stars Tash from Tha Liks and employs sinewy synth lines to bring through a west coast swagger; “Sidewalk Barbecue” harnesses booming drums and swinging double bass to bring back rugged-but-funky mid-’90s vibes; “Through You” pairs guest Kriminul from the Jigmastas with spacey keys to convey a feeling of head-nodding reverie. Capping a prolific month for the duo, also seek out The Good People’s collaboration with Finnish producers Cut Beetlez, which delivers another batch of good vibe hip-hop goodies.

Eternal Ridin’ rolls out like a potent flashback to the early-‘90s days, when groups like Compton’s Most Wanted and Above The Law dropped wizened west coast rap parables over melodic but eerie production. The beats are handled by Pittsburgh’s Buscrates, who displays a knack for constructing songs around funkily menacing basslines, elongated strings, and booksmart references to classic cuts by Gang Starr, MC Lyte, and MC Shan. Weighty voiced Watts-raised MC Libretto takes a cue from the tone of production, rapping about his upbringing (“Culture”) and relaying life lessons gleaned from his days serving federal time (“Sentences”). The nostalgia seeps into the golden-era influences that Libretto invokes throughout the record; he turns BDP’s vegetarian manifesto “Beef” into a musing on culture vultures in the music industry (“Beefin’”), and quotes Biggie’s “Everyday Struggle” to reflect on modern times (“The Struggle”). “If you could see what I saw / You would never break the law,” Libretto reflects on “Sentences,” summing up the redemptive tone of the project in earnest fashion.

Los Angeles producer Mndsgn characterizes Snaxx as a beat tape in the lineage of J Dilla’s iconic Donuts, stating in a press release, “Albums should be proper meals but every now and then a snack can really hold you over.” The 26-minute project starts out as a series of svelte sunset grooves fueled by hazy melody lines, with the short-form style of the tracks—which often last for only a minute or two—quickly building up momentum and bringing the listener into Mndsgn’s world: The cascading synths opening “Papayaberry” cleverly segue into the seductively tapping snares of “Hydration Station”; on “Browneez,” he flirts with Roy Ayers vibes and “Cashoos” takes things in a Tropicalia direction. But as Snaxx enters its closing section, a smattering of vocalists appear and transform the project into something more fulfilling than a musical snack session: Jon Bap steers the hi-hat-saturated “Chips” into a future funk zone, Asal Hazel’s breathy vocals charm on “Snaxx w U,” and Pink Siifu enhances “Ggardenn” with hushed rap confessionals to close the tape on a lush, intimate note.

This month’s most attention-grabbing title is a little misleading—at least if you take it literally. The brainchild of Hawaiian-based MC Nico Agua, The Young Sportsman’s Guide to PISS N’ SHIT offers little in the way of scatological or sporting adventures; rather, it’s a wonderfully kooky hip-hop journey that brims with the sort of abstract lyrical phrasings and off-kilter loops that MF Doom and Madlib perfected. As a rapper, Agua’s blessed with an addictively slurry flow, while the production—which is cooked up by only.beats—relies on cleverly chopped soul samples. The 10-track project also taps out around the 10-minute mark, casting it as a super snappy gateway into Agua’s warped world.

A rap archivist’s dream, The O-Zone Files rounds up 51 spellbounding remixes, rare cuts, and radio freestyles from one of New York City’s savviest and sharpest rap voices. Among its many standouts are a remix of MC Serch’s “Back To The Grill” (a track that originally helped introduce the talents of Nas to the world), a run of fabled freestyles on Bobbito Garcia and Stretch Armstrong’s pivotal radio show (plus other on-air spots alongside departed Harlem icon Big L), and the dusky, sought-after DJ Celory remix of O.C.’s bona fide ’90s classic “Word…Life.” Scratching an indie rap nerd’s itch, the collection also includes a version of Street Smartz’s cult “Metal Thangz” that co-stars Pharoahe Monch and takes the formerly steely song in a mellow, almost blissful direction. Consider The O-Zone Files nothing less than a truly essential hip-hop document that showcases the depth of an MC who’s now well into his third decade of creating classic east coast rap.

True to its title, South Philly’s Zilla Rocca’s 96 Mentality radiates the moody aura associated with east coast artists like Mobb Deep and Nas. A project inspired by the MC’s favorite rap year, the mandolin-propelled “Polished Figaro Intro” has Zilla recalling a friend comparing his style to former Beatnuts member Fashion, before the gnarly, guitar-studded beat Disco Vietnam lays down for “Paul Newman” hits home like a lost cousin to Ghostface’s “Daytona 500.” The mighty healthy Wu-Tang kicks continue elsewhere, with the horn-laden “Eastbay Catalog” hooked around a vintage Cappadonna lyric, and “City Boy/City Man” featuring Zilla copping to playing Cappa’s music to his toddler. “We the older gods but this is new,” sums up Zilla on the ghostly, stripped-down “Spy vs. Spy,” proudly reveling in a role he’s solidifying as his own.