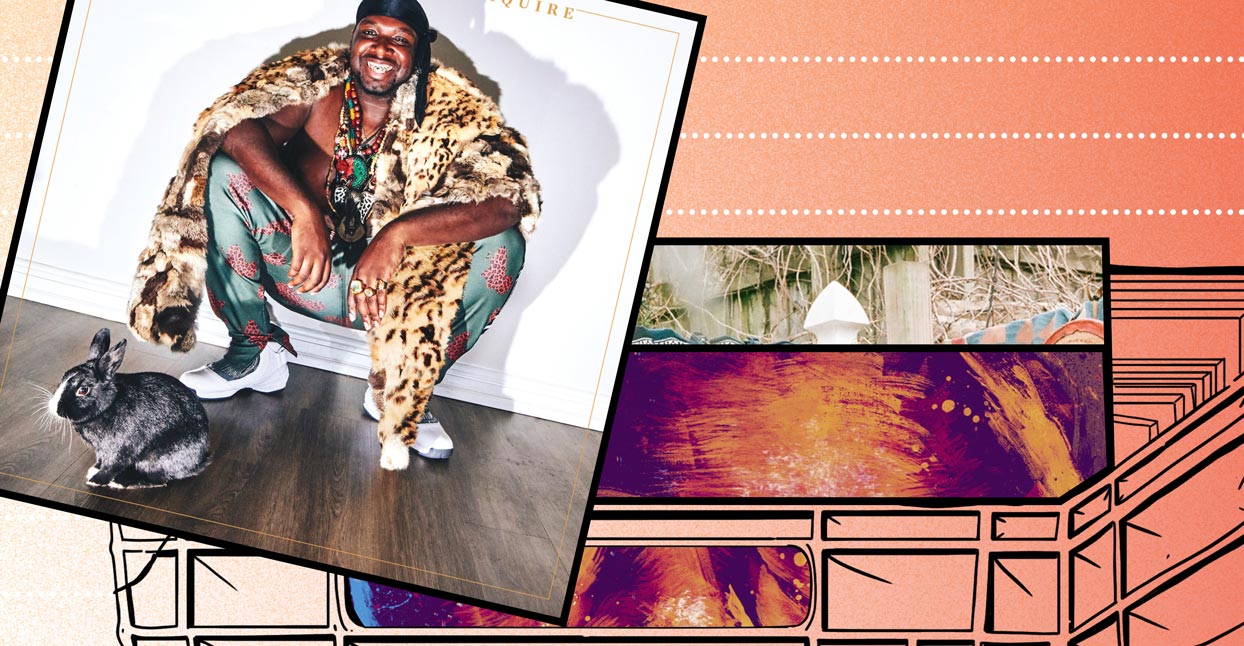 July’s selection of new rap essentials on Bandcamp include the latest misadventures of the genre’s most endearing oddball, dub-influenced hip-hop vibes direct from the U.K. and a project inspired by the relationship between the iconic Clarks Wallabee shoe and hip-hop culture. We also get familiar with a rapper infatuated with freaky plague doctor masks.

Donwill
One Word No Space

Donwill recently described his latest solo album to Bandcamp as a series of conversations with himself. Turning his internal monologues into the lyrical grist of One Word No Space is a savvy move that presents the Tanya Morgan MC as more vulnerable, confessional and, in turn, relatable than he’s ever been. “I’m slowing down these days, trying to find my pace / Looking longer in the mirror at my own face / And barely recognize the guy staring back / Can’t front / I’m kinda happy ’bout that,” he raps on “Settle Up,” coming to terms with how goals and ambitions change over time—a sentiment felt across the album writ large. Donwill’s earnest bars are backed by production from Von Pea, who serves up soul-packed loops and robust drum patterns, while MC Paul Barman, Rob Cave, and Quelle Chris come through with guest verbals. In a rap world of oversized egos and outlandish images, Donwill is a humble gem.

G4 Jag
Nothing Was Given

Throughout their discography, G4 Jag’s album art feature plague masks as a recurring motif. The creepy, elongated beak masks were worn to protect medical workers from the bubonic plague back in the 17th century—but the Harlemite rapper updates the concept to help him navigate through modern grimy environments. The opener, “FlyTalk Pt4,” includes a scene where “the homie spent Christmas day with a crack addict”; swooping over the organ lines of “Bridges,” G4 Jag revels in his older god status by throwing scorn on “my young boy off of molly trying to convince me that he’s a killer.” Catching the ear from the get-go, G4 Jag delivers his commentary in a startlingly deep and granular voice that brings to mind something like a screwed-down Busta Rhymes. The energy and impact of the MC’s slow flow format becomes especially chilling when things get grisly, like on the eerily sparse “Music Box” where he threatens, “I ran down on homie, don’t make a brash decision / Young bull catch you in the cut, start making mad incisions.”

As the leader of TheWinners crew, Hempstead, NY representer Hus Kingpin is a key and incredibly well-connected figure in the East Coast rap milieu. The impactful Slime Wave spotlights the extent of his influence via the astute guest roster, which includes Slaughterhouse spitter Kxng Crooked, Tragic Allies’ Estee Nack, and Wu-Tang Clan affiliates Mathematics, Killah Priest, and Bronze Nazareth. “Y’all niggas wild corny, rappity rap / I hit you with a Dapper Dan slap / That’s a Gucci glove print on your face,” Hus warns on the moody, piano-propelled “Welcome To Hempstead Pt. II,” landing his raspy threats with real swagger. On the steely, string-laden “Mardi Gras,” Hus is joined by fellow TheWinners soldier SmooVth, who sums up the crew’s M.O.: “I’m a take this shit to ’98 / Not the year, I’m talking Flatbush on Church Ave and 98th / Where I held my first 38 / The crack got cut up on dirty plates.” Despite the proliferation of guests, though, Hus is firmly in command of riding his own wave across these 15 evocatively noir-rap outings.

Kool Keith has always inhabited his own wonderfully screwy sector of the hip-hop scene. He’s cast himself as a deviant space-age gynecologist (Dr. Octagon) turned into the warped anti-hero Dr. Dooom, and unveiled a seemingly endless streak of eccentric aliases. KEITH, which was entirely produced by Psycho Les from The Beatnuts, hits home like a modern summation of the rapper’s various forms and whims. There’s a song about our randy host being turned on by Footlocker’s signature black and white striped work outfits (the sultry, bass-heavy “Foot Locka,” with Paul Wall). There’s a thumping track that revisits his Black Elvis persona (“Graceland,” where he’s cruising in a pistachio green Lamborghini). And there’s “Holy Water,” which interpolates a well wrought bassline and includes Keith dabbling with religious references, shooting off inimitable brags like “I got the helicopter that would drop Bibles on top of you,” and questioning whether the congregation is “battery-operated too.” This is classic Kool Keith weirdness, and you wouldn’t want it any other way.

MIKE’s mother has been a central figure in his songwriting since the young New York City rapper and producer broke through with 2017’s May God Bless Your Hustle, which was named after a motivational phrase she used to tell him. The short liner notes to tears of joy include the dedication “rest in power, mama”—and the 20-track mixtape becomes a tender and emotionally-charged experience as MIKE attempts to deal with his grief through music. Much of the album slips woozily into a zone of somnolent funk, with MIKE’s slurry baritone voice sinking into the static and fuzz-embellished loops to alluringly intimate effect. Throughout, there’s a palpable sense that MIKE is expressing feelings he hasn’t quite fathomed yet: “I couldn’t write about much ‘cause it hurt,” he confesses over the sludgy soul of “Memorial,” and on “true blood” he cops, “Only share it on the surface—these some scary feelings.” But by the time the album closes with “stargazer pt. 3,” a song whose shimmering texture suggests a glint of light, MIKE’s closing words sound like he’s coining a new mantra: “Living in a no regret, living in a no regret.”

On the a cappella outro to his self-titled debut album, Mr. Muthafuckin’ eXquire explains the project as being “an exploration of self” that presents “many different voices of mine.” It’s an on point description for a beguiling 12-song collection that laces the listener with constantly shifting styles, moods, and sentiments, all gelled together by eX’s malleable flows. The GRiMM Doza-produced opener “FCK Boy!” mixes feisty braggadocio with commentary on R. Kelly and hip-hop’s infatuation with designer brands. The nostalgic “Rumblefish” has eX pitching himself as a geek growing up in a hardscrabble realm: “Bunch of local dusty dingy niggas firing things / That’s the type of loco shit that my environment breeds / Made a lion of me / But they was lying to me.” Elsewhere, “A Definite Maybe” co-stars Wiki and has the two MCs destroying a Constrobuz beat that resembles shrapnel raining down from overcast skies, while the smooth soul of “Pink Champagne” showcases eX airing out an arpeggio flow and recalling writing the song on his iPhone while sipping Moscato Rosé. A captivating peek into the mind of a truly multi-dimensional artist.

There’s a palpable sense of isolation and displacement conveyed in Gabe ‘Nandez’s music. It’s no surprise, once you start digging into the 25-year-old MC and guitarist’s backstory: Claiming Malian and Argentinian heritage, he was raised by diplomat parents at numerous United Nations posts around the world, including stints in Haiti and Tanzania. On the bass-saturated “Great Ones” he cops, “I don’t socialize too much / Probably ‘cause I talk in my mind too much,” before admitting to relying on imaginary friends and being branded a “diplomat brat” during his teenage years. But ‘Nandez’s globe-trotting adventures have also turned him into something of a multi-city griot, as comfortable spinning parables about lions and wolves in the savanna on the acoustic title track as he is recounting the toil of his battle with drugs on the sitar-laced “Grams.” Crucially, there’s an all important hint of a DOOMian slur to ‘Nandez’s voice that ensures his words resonate with old soul gravitas, ultimately casting Diplomacy as the captivating retelling of earnest and worldly experiences.

Nickelus F
The Gold Mine Vol. 1

Animated Virginia spitter Nickelus F’s latest release collects together 12 unreleased tracks and unfinished sonic sketches, freshly liberated from hard drive purgatory. Befitting the rapper’s roots in the freestyle circuit (he was included in now defunct rap TV show 106 & Park’s hall of fame) the lyrics mix autobiographical snippets with a healthy dose of punchlines and puns. “‘80s baby / Came up on Tang and Ovaltine / Then the Wu-Tang took over things,” he raps over nothing more than a bed of static and a wistful piano loop on “Petey’s Wingz Pt. 2,” before smartly punning on the names of Inspectah Deck, RZA, and ODB. The stripped-down nature of the songs offers a glimpse into Nickelus’s approach to constructing tracks and testing out ideas. He reveals the beat behind “The Ferry Song” was conceived during a ride from Staten Island to Manhattan back in the summer of 2017, while “Cold Coffee” takes a cue from the everyday blunder of letting a cup of java turn tepid to build into a larger lament on his lot in life. Throughout the project, the slightly muffled, demo quality of the songs enhances their charm—and hopefully it won’t be long before Nickelus unearths more gems for future installments.

A stalwart on the U.K. hip-hop scene since the early 2000s, Seanie T specializes in bringing through reggae and dub-infused vibes influenced by the Coxsone and Saxon sound systems that soundtracked his east London upbringing. For Rough, Rugged and Smooth, the MC’s teamed with Hamburg’s DJ Suro, whose beats are a fitting blend of deep, dub-style bass tones and crispy boom-bap snap. Fiery opener “Get Hustlin'” flips the usual hustler’s mentality into a call to spread the wealth, with Seanie T declaring, “Share the money equally and live life like a family.” Over the bashment bounce of “Warning,” he trades bars with long-time spar Roots Manuva. For anyone partial to following the Guinness World Records, the epic posse cut “Veterans” lines up a whopping 19 MCs—including Ty, Rodney P, and the Ragga Twins—over a smoldering beat in a convincing bid for the history books.

Clark Connoisseurs is a deep dive into one of hip-hop’s unlikeliest, most enduring symbols: the Clarks Wallabee shoe. Curated by L.A’.s Supreme Cerebral and NYC’s Eloh Kush, the project opens with archived interview footage of Ghostface breaking down his vivid Ironman album cover, before “Rock Candy” bursts into life with punchy brass stabs and guest vocals from Planet Asia. Across the 10-track project, the host MCs and guest spitters embrace the same sort of razor-sharp flows, five-percenter slang and swaggering arrogance that Wally Champs Raekwon and Ghost perfected, while producers Clypto and Julez White contribute beats that positively drip with emotive soul loops. Stitching the songs tougher are audio snippets that include MF Doom recounting his own signature Wallabees (complete with “reflective piping in the laces”), and a documentary segment that dates the shoe’s hip-hop heritage to Jamaicans sporting the footwear back in Brooklyn in the ‘80s. It’s a fashion-forward concept album that smartly spotlights a niche part of the culture.