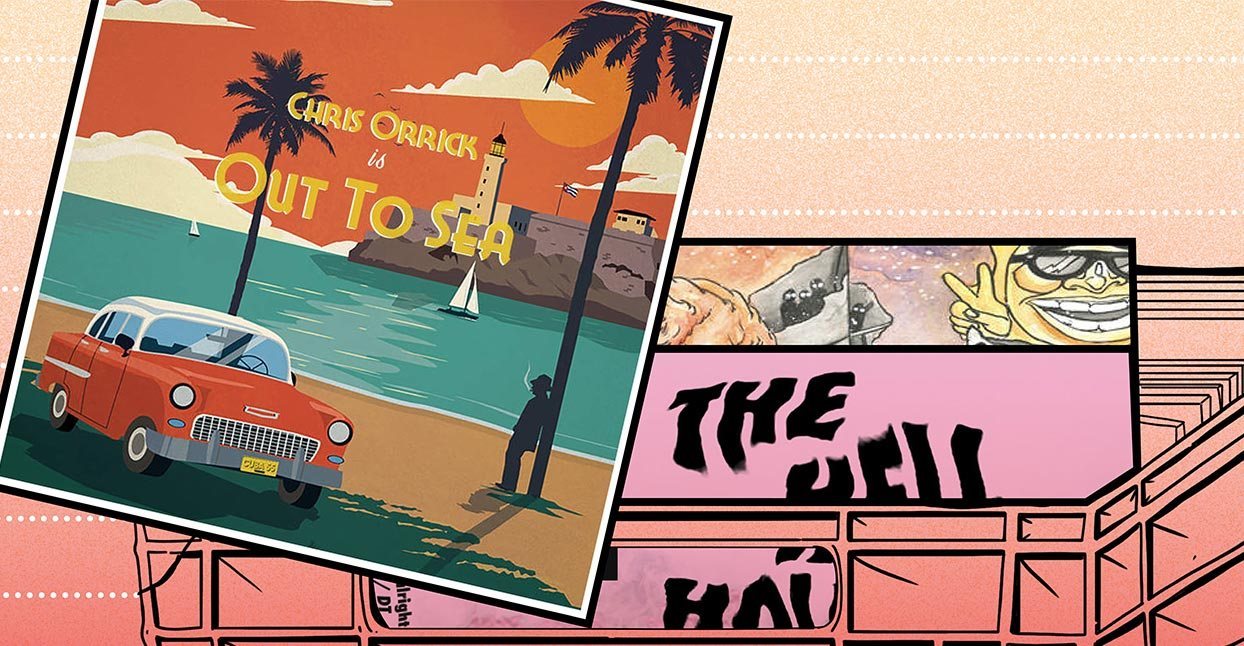 The 10 most essential hip-hop projects to land on Bandcamp during the month of May include a psychedelic, Jack Kerouac-inspired ramble through Los Angeles, a set of street-centric dispatches delivered from Niagara Falls, and a livewire release from one of Danny Brown’s closest allies. We also check in with an indigenous rap duo from Vancouver packing heritage-forward lyrics.

Big Baby Gandhi
We Live In A Society

Back in 2012, Queens representer Big Baby Gandhi was part of the roster of Heems from Das Racist’s Greedhead label. Fittingly, the MC’s latest foray is released on U Don’t Deserve This Beautiful Art, an eclectic imprint named after a piece of artwork created by Kool AD. As a rapper, BBG is blessed with a lyrical style that mixes cutting socio-political commentary with supremely braggadocious lines. “I object to the capitalist state / I hate corrupt government, politicians that’s fake / I don’t trust corporations with my tax money,” he vents over the sinister boom-bap of “V For Vendetta,” before switching lanes to join erudite guest Mr. MFN eXquire on “Super Dick,” where the duo trade bars that quite literally big up their phalluses over a bass-swamped beat. Elsewhere, the woozy “Rockin’ 4 My AZNS” offers some seasonally-appropriate life advice: “It’s a hot summer—you should get air conditioning.” Duly noted.

New York-based Jamaican spitter Nomad Carlos and London producer Farma Beats originally connected on Instagram; after deciding to record together, they wound up crafting Cipher, a moody and heavy duty seven-track listen. “I’m at a stage where I do not party / I don’t know who got more sons, yo, Bob Marley or Roc Marci / Kartel or Bounty / The church or the army / I’m a rare breed, half-Yankee, half-yardie,” raps Carlos, presiding over the crunchy snares and elegiac choral wails of “Leviathan Axe.” Delving into conceptual territory, the hushed drums and bluesy guitar lines of “Old Flame” prompt Nomad to wrestle with his long-standing relationship with hip-hop, and the maudlin production fueling “Facts” inspires the MC to balance up the good and evil in the world around him. A convincing transatlantic collaboration from two artists finding common ground in the shadowy shades of the hip-hop palette.

Jamal Gasol
No Joy Without Pain 3

New York’s upstate region is brimming with hip-hop talent right now. The Griselda camp is representing Buffalo, and Eto and 38 Spesh are leading the Rochester chapter. Next up is Jamal Gasol, whose gritty verses depict the grisly side of Niagara Falls life. Following up last year’s solid True Stories release—which included cameos from Estee Nack and Rome Streetz plus some deliciously wonky Sadhugold production—No Joy Without Pain 3 teams Gasol’s sturdy, authoritative flow with soulful, minor key beats provided by Kil and Quis Star. “I had to get it how I’m living / All my lyrics come from first-hand experience,” informs Gasol on “Stay On Ya Deen,” before summing up his stock in the game: “I can care less about who believes me / Y’all make this street shit sound easy—but it’s greasy.”

“Exposed to the experimental, let your freak flag fly / To we D-I-E we be D-I-Y,” proclaims ialive on “Already Dead,” the opening track on this full-length team-up with fellow Philadelphia MC Darko The Super. It’s a fine credo that sums up the creative lo-fi kicks on offer across the album’s 15 tracks. The production is all crusty drums and dusty off-kilter samples—check the loping funk of “Quicksand” for a snapshot of the style. The lyrics brim with pop culture references, like on “Godzilla” where Darko cops, “Me and Donnie form like Voltron / I never seen that cartoon, I only heard it in rap songs.” Art rap figurehead Open Mike Eagle also passes through on “I’ll Take What I Can Get,” and duly embraces the nerdy vibe by quipping “My laptop gets hot enough for sunscreen.”

Chris Orrick
Out to Sea

Detroit wordsmith Chris Orrick’s latest long-player is packed with prescient and sarcastic social commentary penned as a reaction to “the damage done by the 2016 United States Presidential Election, social media, and the 24-hour news cycle.” Delivered in the MC’s easy-going flow over bucolic beats, his critiques of modern life peak on “Funny Things,” where Orrick unleashes a sardonic analysis of America. “The government is funny ’cause they take a little portion / Then spend it all at war and make us fight about abortion / And don’t forget about the funny guns / We give to funny men who think it’s funny watching children run,” he raps before firing off the killer kicker: “Only question that I have is, why aren’t you laughing?” The album’s overtly political moments are balanced by more light-hearted outings like “Liquor Store Hustle,” where our tipsy host details desperate attempts to secure late night snacks.

Psalm One
Flight of the Wig

After dropping the three-track appetite-whetter Don’t Get Lazy Now! in March, Chicago-to-Minneapolis MC Psalm One returns with the fully fleshed-out FLIGHT OF THE WIG. Bustling with smart barbs and quick-witted punchlines, the fleet-tongued MC’s voice bubbles over electronic-tinged backdrops typified by the infectious purring bassline that beds opener “Can’t Beat That With An App.” On mid-album cut “Nasty Jazz Hands,” she encapsulates the project’s core message in no-holds-barred fashion: “Racists hate me but I’m way faster / Get a straight assassin on a gay basher / Drop your label, they slave masters / In a field of underpaid gatecrashers / I rap for women with new agendas / Got rules to bend, friend, are you offended?” Tempering these enthralling lyrical tirades, closing cut “I Got Time (incomplete)” allows Psalm One the space to get pensive over a stripped-down, piano-based beat.

Comprising Young D and Yung Tribez, the Snotty Nose Rez Kids are an indigenous hip-hop duo hailing from Vancouver whose music tackles themes of ancestry, protest, and environmental preservation. This lyrical attack is rattled off over production rooted in trap sounds; opening salvo “Rebirth” is all burly bass tones and fiery snares topped with lyrics like “Misunderstood, y’all don’t understand / I’m a red man, with a method, man / Resist, revive, indigenize / We heavy hitters, we don’t die, we multiply.” The rap references continue to fly forth on the sinister sounding “Urban Legend,” which includes the righteous boast, “Christopher Wallace over Columbus.” Final track “Yuck-Sue-Yaach” successfully signs off with a slogan that encapsulates the Snotty Nose Rez Kids’s heritage-forward mission: “I’m living off the land like the ones who did before me / I be passing on the story of the ones who died before me.”

A livewire member of Danny Brown’s Bruiser Brigade clique, Detroit’s ZelooperZ follows up his recent Wildcard release with this potent 11-track showcase of his superbly agile flow. Executive produced by Black Noi$e, the album balances tracks underscored by ominous bass tones (“Smoking Chocolate,” “Bootleg”) with more melodic, piano-fueled moments coated with a nostalgic sheen, like the ’80s-soul influenced “Love Operation,” which has the MC swapping his usual, high-octane couplets for a sing-song drawl. Standout moment “Easter Sunday” includes a guest rap from Earl Sweatshirt, but it’s ZelooperZ who snags the quotable crown with the smile-inducing opening couplet, “When my momma hear this I know she gon’ be feeling this / Her son make her feel good like photosynthesis.”