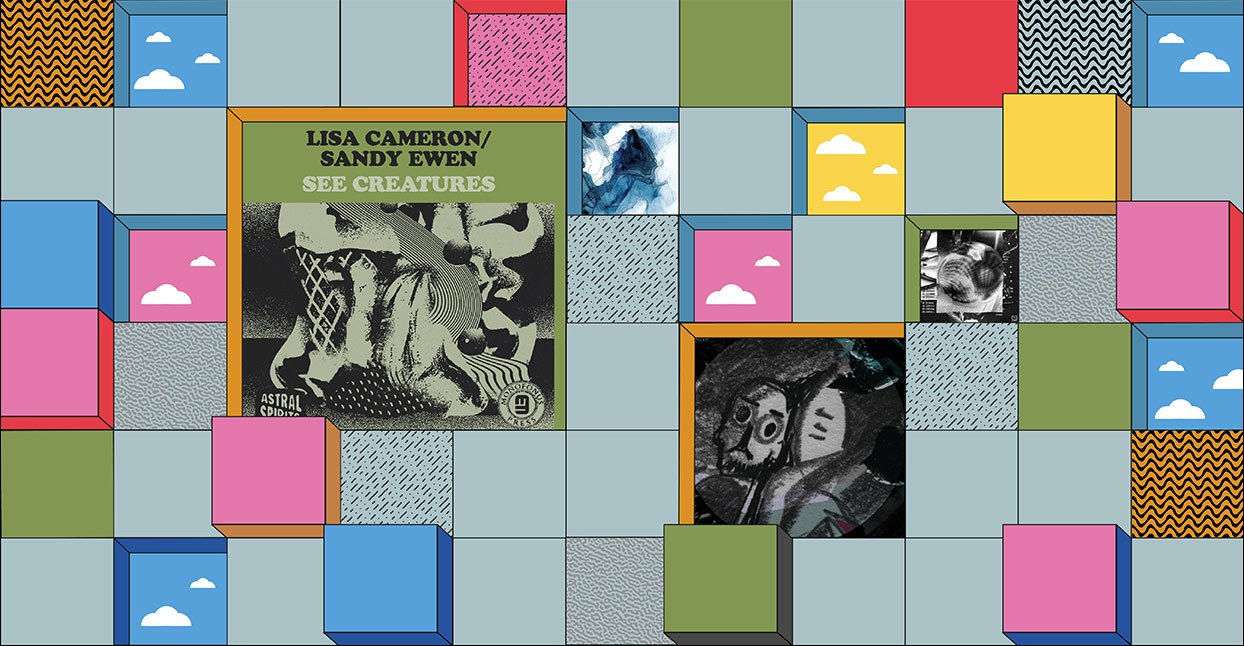 There’s a spirit of scientific inquiry informing See Creatures, the first collaborative release between Austin multi-instrumentalist Lisa Cameron and New York guitarist Sandy Ewen. Its title, together with the encyclopedic song names (“Gigantura Indica,” “Rhinochimera Atlantica”), suggest that the duo’s goal is to identify new sonic species. The music further strengthens this hypothesis, as Cameron—who plays her own self-invented Berimbauophone—and Ewen push the air back and forth, filling it with small sounds and careful gestures that gradually coagulate into busy landscapes, teeming with life. At times, See Creatures sounds more like the rumbling of insects and animals than the creation of humans, a testament to Cameron and Ewen’s ability to invent music on the fly.

Born in Finland and presently residing in Glasgow, Scotland, Maria Rossi makes emotionally resonant sound art under the name Cucina Povera. Her new album, Zoom, is a minimal affair, with most tracks cobbled together from little more than her airy voice and a loop pedal; her delicate phrasing and delivery, too, creates the impression that she’s transmitting her ideas directly to your brain. And yet, Zoom is not without shades of grandeur, in part because its tracks were recorded spontaneously in a number of different locales. To that end, the diversity of atmospheres makes the music feel as though it’s constantly expanding, with Rossi’s authoritative-but-intimate voice circling the globe, again and again.

Thirty-three years into their loose project to dismantle rock music, New Zealand trio The Dead C are still finding new ways to tear down old styles. At first, Rare Ravers feels a bit slack: the only meaning of the track titles (“Staver,” “Waver,” and “Laver”) appears to be that they rhyme, and many stretches in the album sound like the band members are splayed out on a couch, groggily stabbing at their instruments to keep from falling asleep. As with most Dead C records, though, repeat listens reveal these slow-dripping pieces’ true, eventful nature, all fractured riffs, impatient noises, and stubborn percussion; “Staver”—a rock song stretched out like silly putty—expands into a 20-minute lurch which, believe it or not, actually gets pretty thrilling at its peaks.

Left Hand Cuts Off The Right

According to his own website, the subject of mental health plays a key role in the work of U.K.-based musician and artist Robbie Judkins. But for his latest album as Left Hand Cuts Off The Right, the issue was particularly personal. In late 2017, he suffered a brain injury that required a substantial amount of recovery time. He used that process of healing to create Purge, which he calls “part of a continuing process of creating sound as therapy.” The music reflects that winding inner journey; songs like the ominous “Doubt & Worry” and the droning “Keppra” build gradually, with slow tones and sparse notes, mirroring Judkins’s cautious return to everyday life, as well as the world at large. But Purge’s therapeutic approach is more aggressive than it lets on: opener “Oh Shut Up” is filled with darkly abrasive sounds, and the closing title track builds from reflective notes into overwhelming tones before retreating back into lonely piano chords.

Any earth-conscious Californian thinks about water a lot, and for good reason. Bay Area composer Cheryl E. Leonard has chosen to contemplate the subject through sound, creating her new album Watershed with field recordings from streams, rivers, beaches, wildlife refuges, and national parks. Though the album’s three lengthy pieces have a tactile, environmental feel, they aren’t just audio documentaries, but rather complex, mixed-media compositions which find Leonard playing all kinds of atypical instruments, including crab claws and bird bones. There are a wealth of rich musical moments on Watershed, but the highlight is the title track, in which Leonard’s delicate, precise sounds get gradually washed away by towering waves.

The music of Porest has always had a kind of twisted radio-play quality, like a more politically-pointed version of Negativland’s culture jamming. Usually, their provocative collages are doled out in song-like chunks, but on Abject Mirror, they delve fully into what they call “audio-drama with advertisements and musical accompaniment,” presenting a continuous, album-length narrative about a future in which humans can no longer can be seen in mirrors. Absurd and unsettling as Porest’s semi-robotic voices and abstract sonics are, Abject Mirror’s overarching story is actually rather logical and easy to follow—even as it folds in on itself through a complex cycle of time-collapsing communications, Philip K. Dick-style. It’s not so much dystopian as it is simply disturbing, upending the listener’s assumptions about humanity in subtle, serious ways.

About a decade after her releasing her pioneering debut album, 1980’s The Expanding Universe, Laurie Spiegel devised her own personal music-making software for the Macintosh computer, dubbing it “Music Mouse”; she used this program to craft her next album, Unseen Worlds, which turned out be more atmospheric and dramatic than its predecessor. Where on The Expanding Universe she often used small, repetitive sounds to build environments, here Spiegel relies more on long tones and overlapping layers of sound. The end result is a series of deep, attentive tone-essays that feel simultaneously scientific and theatrical, demonstrating the power of Spiegel’s self-made tools as the means of connecting with some greater power, lurking somewhere out there in the universe.

Boston-area comrades Howard Stelzer and Brendan Murray have forged fascinating work over the past few decades as standalone artists, but they never actually made music as a duo until last year when they released their first collaboration, Connector. The four tracks on that tape were named simply by the order in which they appeared; on their second duo effort, Commuter, the titles are more evocative, as well as the music, which reflects an uptick in their emotional—perhaps even dramatic—sensibilities. Opener “Indoor Foliage” features rising tones that seem to underscore monumental events, and the rumbling “Let The Children Guard What The Sires Have Won” creates an ominous setting in which Stelzer and Murray replicate the tension of a horror movie played out in one’s subconscious.

Perhaps the most tireless artist in experimental music is Thollem, who has released 60 albums in the past 12 years and collaborated with so many musicians it would be easier to list the people he hasn’t played with. His omnivorous interest in styles and format is dizzying, but he maintains a steady focus on Electric Confluence Vol. 1, an album comprised simply of solo synth instrumentals. Thollem uses this formalist restriction to launch into a wide array of sounds, gliding all over the map—sometimes he sounds like a jazz improviser, sometimes like a New Age atmospherist, sometimes like a later-day Raymond Scott in a synth lab—in pursuit of whatever next idea interests him. What we’re left with is a record full of surprises that both engages and challenges the ears.

This unearthed material from Japanese sound art legend Otomo Yoshihide is pretty brief, consisting of five tracks that clock in less than 20 minutes total, but it still manages to represent a significant portion of Yoshihide’s sonic and instrumental range. There’s a noisy live turntable improvisation, a remix of French composer Pierre Schaefer, a home recording that includes the sound of “objects,” and even a minimal organ exposition made when Yoshihide was just six years old. Perhaps most compelling, though, is the closer “Carbon and Guitars,” a halting acoustic guitar study that highlights the patient subtlety of Yoshihide’s music.