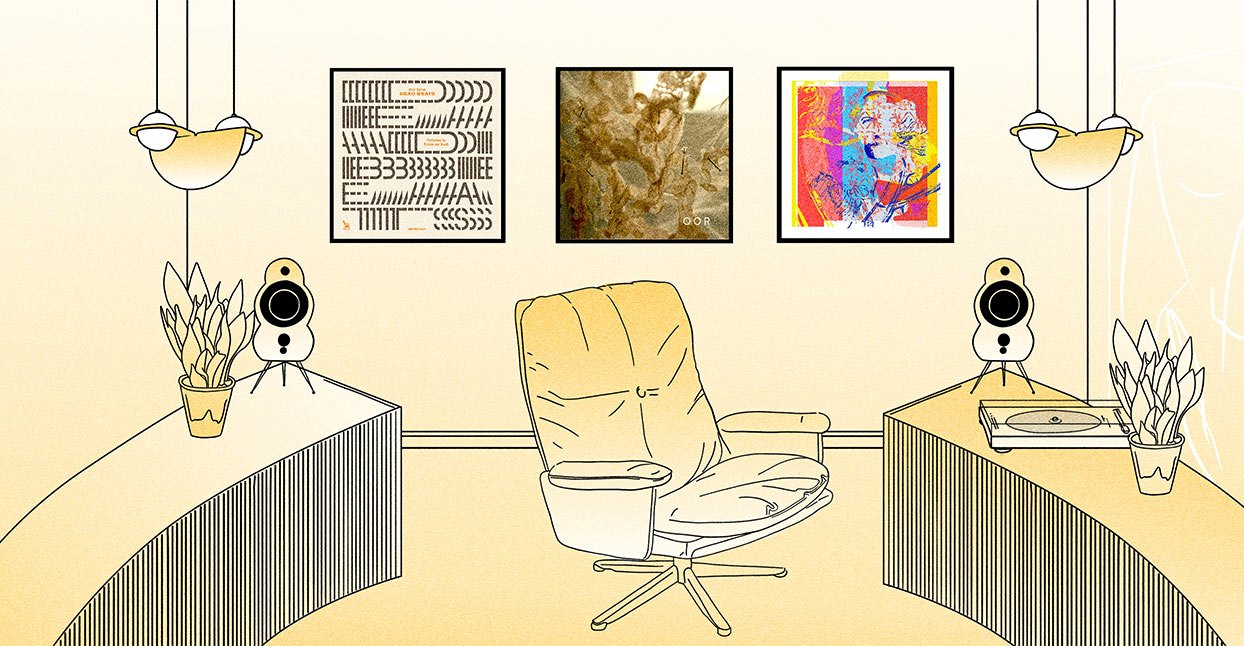 A couple of years ago, viola da gamba master Liam Byrne stepped out of his usual world of baroque and Renaissance music to partner with violist Nadia Sirota. Together, they took on a lustrous, overtone-rich composition by Irish composer Donnacha Dennehy, Tessellatum. The experience seems to have opened up new worlds for Byrne, based on the arresting repertoire he digs into on his first solo album.

Here, he engages a mostly contemporary field, while also underlining the inherent richness and modernity in a couple of pieces from the 1500s. Through overdubbing, he layers five gorgeous contrapuntal lines that drag, soar, and collide like a ship tossed at sea on “In Nomine,” the sole output of a composer known as Picforth. This is followed by “Lines Curved Rivers Mirrored” by Edmund Finnis, a richly varied solo that connects the viola da gamba’s thick resonance to the ever-shifting movement and fury of water. When he shifts to a piece aglow with electronic shading, “Suspensions and Solutions” by Alex Mills, there’s no disconnect; his instrument’s tonal depth is just as effective carving out cavernous, enveloping spaces as it is slashing melodic lines. The recording also features pieces by Valgeir Sigurðsson and Nico Muhly, and old masters Marin Marais and Riccardo Rognoni.

The second album from Chilean guitarist Diego Castro Magas presents some of the most thorny, technically dazzling contemporary pieces I’ve heard made for that instrument. The six pieces were written by composers from Chile and the U.K.—where Magas earned his PhD, at University of Huddersfield—including several created specifically for him. After being mesmerized by his astonishing technique, it’s easy to understand why a composer would relish the opportunity.

The opening work by Chile’s Nicolás Kliwadenko, “Infijos,” offers a sterling example of Magas’s capabilities. The title refers to a linguistic sequence inserted within a word to alter meaning, and the music follows a jarringly discursive pattern, as sublime extended techniques—percussive or frictive—perpetually interrupt jagged, yet fluidly voiced patterns with unexpected course corrections. Similarly, “Chile” by Christopher Fox stacks repeated patterns for cleanly articulated and damped voicings that then stumble or collapse in on themselves. This is meant to symbolically express the suppression of freedom in the lives of people affected by U.S. political policy, at home and abroad. James Erber’s “Am Grabe Memphis Minnie” is partly an homage to the titular blues guitarist, abstracting some of the techniques of the pre-war era and melding them with modern ideas, like harmonics. I can’t help but think of Magas as the Derek Bailey of contemporary music.

New York’s TAK Ensemble show their range and curiosity on this terrific self-released album, alternating between full quintet pieces and bracing duos—all of them bristling with edge. “Mouthpiece 28,” part of an extended series of works by Erin Gee, vibrantly explores allophones and abstract vowel-consonant constructions, deftly articulated by Charlotte Mundy, which are both sung and scored for various instrumental combinations. The piece offers a kind of whimsical yet rigorous game of hot potato, as sounds and sighs are passed all around the group with effortless virtuosity.

Tyshawn Sorey’s “Ornations” requires a different sort of virtuosity, a high-wire tangle of lines that criss-cross, align, spit astringent harmonies, and flutter away in a meticulous dance of flute (played by Laura Cocks) and clarinet (played by Carlos Cordeiro). Ashkan Behzadi’s “Az Hoosh Mi…” delivers breathtaking movement from Mundy’s elastic voice and exquisitely rendered shadows and responses from violinist Marina Kifferstein, all built around a single phrase from a poem by Reza Baraheni. Ann Cleare’s “Unable to Create an Offscreen World” explores “ideas of wrongness, incompatibility, and inability with ferocious streams of energy, confidence, and hope” through a cornucopia of scratches, snorts, whinnies, and squiggles. The album also features a heady piece from David Bird and a wonderfully twisted track by Natacha Diels, each tackled with sure-fire snap.

Early in his career, composer Alvin Curran turned away from piano—the instrument he was trained on—in favor of all manner of sound-making, rejecting the classical tradition. His work as a member of Musica Elettronica Viva opened up new possibilities for art music, drawing heavily upon improvisation. In the last installment of this column I discussed one of his singular solo recordings from the ‘70s, where his compositions were utterly liberated from any given tradition. He eventually returned to piano, but created music from a much freer point of view.

In 1991 he began writing what would amount to the 12-movement, six-hour opus “Inner Cities,” studies of the teeming energy and contradictory impulses of urban centers. Curran composed the ninth movement for Dutch pianist Reinier van Houdt. Curran wrote of the work as a whole: “My goal, as always, was to reduce the musical elements to their ultimate essences, to repudiate and embrace dualism, and to emulate, even in permanent notation, the feel of spontaneous music-making.”

On this new recording, van Houdt illustrates that goal brilliantly in a 30-minute journey marked by thrilling and unnerving polarities of density and energy, freely arranging ideas gleaned from all across history. “Dead Beats” is a new work written for the pianist which remaps those earlier concepts into a far more elliptical and shape-shifting five-movement expedition, where it’s hard not to delight in getting lost over and over again.

Jennifer Walshe
All the Many Peopls

Few artists over the last two decades have so rigorously upended contemporary music conventions as the Irish composer and performer Jennifer Walshe, who’s redirected the idea of virtuosity toward all kinds of practices outside of the academy, whether body movement or imaginary histories. She wrote the 2011 solo piece All the Many Peopls, a tour-de-force performance work that gathered its sprawling, rapid-fire texts from various Internet sources—“Amazon.com message boards about vampire physiology; U.S. and British soldiers making cell-phone videos of themselves blowing things up and  uploading the videos to YouTube; the collective unconscious as evidenced by Google Autocomplete,” etc.

Walshe creates countless “characters” to read, sing, shout, and embody the radically disparate texts, masterfully conveying the way the Internet flattens any kind of hierarchy of information and ideas. Over a fluid soundscape of field recordings, electronic drones, blasts of noise, and video game bleeps, she unspools a dizzying, often absurdly humorous bricolage of conspiracy theories, song lyrics, and online detritus in a meaningfully disorienting barrage. Seemingly random phrases take on new contextual meaning, both revealing and ridiculous. Walshe’s gift is that the work transcends any theoretical grounding to provide a mix of hilarity and claustrophobia, all meticulously paced and bursting with her outsize personality.

Irish composer Donnacha Dennehy explores two fascinating sound processes on these recently composed works, performed by two of contemporary music’s premiere ensembles. He wrote the exhilarating “Surface Tension” after being inspired by an exhibition at New York’s Metropolitan Museum of Art featuring indigenous drums from around the globe, in particular percussion where surface skins could be stretched to change pitch.

He collaborated with Chicago’s Third Coast Percussion to develop new possibilities, including a technique introduced to the group by fellow percussionist Glenn Kotche of Wilco, which involved blowing air through tubes fitted into the side of the drums to force the heads to stretch and relax, changing their usually fixed pitch. The composition features several sections where subtle melodic material drifts through the throbbing rhythmic patterns, with those shifting pitches complemented by melodic phrases played on marimba and bowed sounds produced on vibraphone. He wrote “Disposable Dissonance” for Ireland’s Crash Ensemble—which he formed in 1997. It’s a three-part piece where various strains of rhythmic harmonic dissonance creep into the pulsing, sparkling string-and-reed cycles, which are left unresolved, tossing like husks as the composition plows on toward its next section. Despite the lack of percussion, it’s no less driving than the first work.

Few contemporary composers have proven more adept or imaginative in using the splendor of nature as both an inspiration and a source in their work as John Luther Adams. Become Desert is the third in a series of compositions created for the Seattle Symphony under the baton of Ludovic Morlot, following Become River (2010) and Become Ocean (2013). As the composer wrote in an essay for Slate last year, “In all three of these works, space is a fundamental compositional element. I’m not speaking only of poetic or metaphorical space, but also of the physical, acoustic, and volumetric space of the musical ensemble and the place in which the music is heard.”

Adams breaks up the orchestra and choir into five discrete sections that surround the audience in live performance, but the music is utterly convincing in mere stereo: 40 minutes of luminescent, levitating stillness that gradually takes on a vibrating heft. The various groupings move in different tempos—pinging bells and chimes suffused in a mutable, sun-drenched glare of strings, brass, and voice. As the piece unfolds, the listener adjusts to the glistening sound field. The symphonic washes almost feel as if they’re transmitting a majestic light—yet that serene atmosphere feels punctured by meaningful rhythmic tension and harmonic clashes.

Object Collection
You Are Under Our Space Control

This new effort is no less audacious, building its unwieldy, chattering dynamic upon a rigorous drum machine transcription, brilliantly realized by Shayna Dunkelman (Xiu Xiu), of John Cage’s influential 1951 piano work Music of Changes—a bold, early exercise in indeterminacy. Travis Just and Kara Feely, who wrote this epic, call it a “utopian space opera.” What that entails is three dynamic vocalists engaged in a riot of rapid-fire sung-spoke texts interrogating progressive political issues with a druggy mixture of futurism, absurdity, and the quotidian, all inspired by the writing of Sun Ra and the ideas of Russian cosmism. Their voices are routinely disfigured with needling electronic effects, and the through-composed beats are riven with squelchy synthesizer tones and bleeps, metal percussion, and some effects-heavy electric guitar played by Taylor Levine. It’s a dense, all-out assault that can be wearying at times, but it’s anything but predictable.

At the dawn of the current century, Australian guitarist Oren Ambarchi and turntablist Martin Ng, both staunch experimentalists, launched a duo project. Together, they began exploring richly marbled drones—serrated, throbbing, undulating—with only the faintest sonic interruptions; a stray guitar pluck here, a sibilant squiggle there. They created opaque abstractions so elusive it wouldn’t seem possible to translate them for a chamber group, but in collaboration with the versatile Ensemble Offspring that’s exactly what they’ve done.

The five pieces are in no way literal transcriptions of the sonic drift Ambarchi and Ng spread over their two albums together, but these often-biting orchestrations masterfully capture the essence of their soundworld with strings and percussion. On “Simulacrum I,” pairs of violins play sul ponticello to produce glistening harmonics that mesh stridently with bowed vibraphone and cymbals to carve out a hauntingly spectral atmosphere gorged with ominous portent, while “Woods” uses electronics to manipulate a pair of bass drums into sub-bass suspense. “Recife,” arranged with the help of fellow Aussie James Rushford, is the sole track featuring sounds from Ambarchi and Ng, and it’s the most ravishing and dramatic entry, with more natural string tones and percussive rumble tattooed by electronic pings.