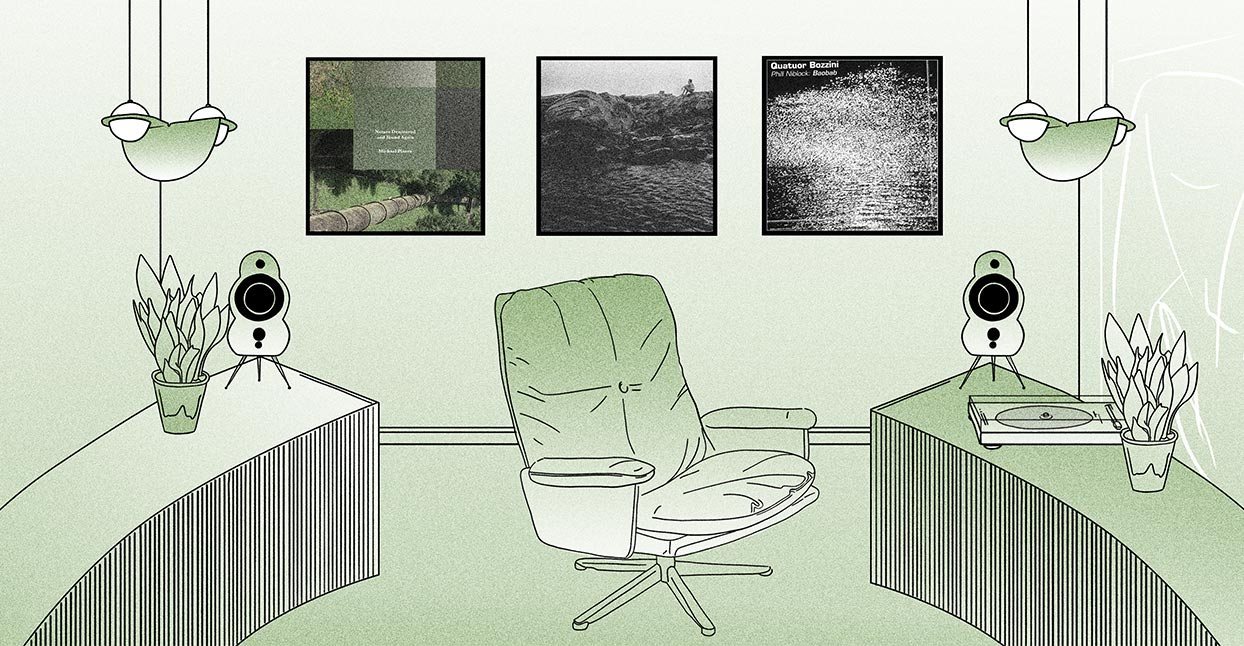 The Last Days of Reality

This stunning collaboration between Australian composer and flutist Cat Hope and the French musique concrete practitioner Lionel Marchetti evolved slowly, following a festival in 2010 where they both performed. Hope didn’t realize that Marchetti hadn’t previously composed for a chamber ensemble before; their work together began with “Première Étude (Les Ombres)” which deployed a text score by Marchetti. He asked Hope to send him recordings of “ocarinas, harmonicas, and folk instruments,” which he transformed into a kind of readymade sound projection—which can stand on its own as individual pieces—as a backdrop for the performers on stage. The composed music flows around those manipulated recordings and other sounds created by Marchetti, its lovely abstraction blurring the lines between pre-recorded and live elements. “Pour Un Enfant Qui Dort” deploys flute recordings Hope made into a deliciously spacey multi-layered murk, regularly pierced by pinging electronic asteroids. The end result of all of these complicated processes provides some of the most gripping music I’ve heard in the last year.

These days, most composers support their careers primarily through commissions—work produced by request. Los Angeles violinist and composer Andrew McIntosh—a key figure in the West Coast contemporary music scene—usually follows that practice himself, but he wrote these two succinct, tender works simply because the sounds came to him. “We See the Flying Bird” is a gorgeously meditative 10-minute piece for Yarn/Wire percussionists Ian Antonio and Russell Greenberg that registers as a ruminative, wordless conversation. Each utterance is met with an overlapping response, as serene melodic shards drenched in cool resonance collide in a seductive bath of overtones. Nearly all of the sounds, both struck and bowed, are produced with metal percussion, which makes the occasional wooden ping hit that much harder, but by and large this dream-like construction magically floats over the listener. There’s a similar restraint and timbre to “Five Songs,” where the percussionists, joined by fellow Yarn/Wire member Laura Barger on Fender Rhodes and additional percussion, support the crystalline, wordless singing of Roomful of Teeth soprano Estelí Gomez. This time the percussion is decidedly muted, with liquid, swelling attacks. McIntosh noticed the affinity these two works share with one another, and they make a brilliant pairing on this short release.

Composer Reiko Füting created these works as an exploration of memory, shot through the lens of musical quotation. Some works are built from fragments of early music pieces, or, in the case of “versinkend, versingend, verklingend: fernes Lied,” a Debussy piano prelude. Despite such diverse materials, the music never feels like pastiche. The album opens with “‘als ein licht’/extensio,” where the words of contemporary poet Kathleen Furthmann are gorgeously shaped by the haunting early music singing of AuditivVokal Dresden. It’s set to a melody based on a motet by 17th century composer Heinrich Schütz, and situated within passages of austere percussion, as well as alternately elliptical and swelling figures from Art d’Echo, a viola da gamba quartet. “Eternal return (Passacaglia)” embraces far more contemporary language. The lines sung by soprano Corrine Byrne toggle between fluid and jagged, lyric and wordless, as she runs through sonic permutations of Nietzsche quotes. Trumpeter Andrew Kozar accompanies her with unpitched snorts, upper register cries, and vocalic extended techniques. “I am,” the quotation in “mo(nu)ment for C,” sung by loadbang baritone Jeffrey Gavett in English, French, and German, responds to the 2015 attack on the French magazine Charlie Hebdo, while the lovely polyphony of Kozar’s trumpet, William Lang’s trombone, and Carlos Cordeiro’s bass clarinet sounds both ancient and modern.

This nimble New York trio formed with a goal to expand the scant repertoire for piano, bass, and percussion—common enough in jazz, but rare in composed music—and they’ve not only achieved this, but they’re also making some incredibly beautiful, fascinating music. Pianist Karl Larson, bassist Pat Swoboda, and percussionist Matt Evans (Tigue) devote their second album to commissions by Scott Wollschleger, whose writing brings out a different facet of the trio than the fizziness of their debut. Built around the titular suite, the album toggles between Morton Feldman-esque contemplation and pointedly fractured, multi-planar collisions to indicate both the hope and deep disappointments of contemporary America. While the sudden shifts could seem like lazy pastiche in lesser hands, here the abrupt changes work because they feel cogent, emotionally, with a lyric sense of despair frequently lifted by a jolt of vitality—only to derail into another strain of gloom. The piece is bookended by two shorter works—the piano solo “Gas Station Canon Song” and the meditative piano-vibraphone piece “We See Things That Are Not There,” both of which end up in the title work in fragmented fashion, further tying it all together. A stunning work that creeps up on the listener over time and doesn’t let go.

In his liner notes, Kurt Gottschalk writes that a recording can’t really do justice to the music of Cecilia Lopez, before correcting himself and saying that’s not the case. He then claims both conceits are true. Lopez makes work somewhere between installation and performance, and while she considers these pieces compositions, with meticulously detailed instructions, no performance is ever quite the same. The five parts of “Red” are derived from the interaction of several structures woven from cables outfitted with contact microphones and loudspeakers, complemented by sympathetic synthesizer tones. Lopez manipulates the unwieldy environment accordingly by altering the motion of the microphones and the speakers, creating a constantly morphing wall of electronic noise. Low-end howls transport the listener through a virtual wind tunnel, while upper register squeals lash about like live wires. While witnessing a performance of the piece would certainly add an exciting visual element, where the fluctuation could be connected to movement, hearing this sonic capture remains deeply satisfying. The 70-minute “Machinic Fantasies” is no less gripping: Lopez modified a pair of 55-gallon oil drums, each outfitted with a speaker, with cutouts that allow sounds to seep out. The drums are hand-turned, constantly changing the output—field recordings, spoken text, electronics live brass from Christopher McIntyre and Joe Moffett—and mics placed by the holes further complicate things.

New York composer and percussionist Aaron Siegel was inspired by a video capturing the murmuration of starlings to write “A Great Many,” a hypnotically pulsing gem that recalls the music of Steve Reich as much as it does Tortoise. His writing deftly reflects the visually dazzling phenomenon when large flocks of the birds take to the sky, the shift in direction by just one starling radically resulting in the entire mass changing its motion. The piece is performed by clarinetist Christa Van Alstine, whose fluid lines trace warm, fluttering melodies over Mantra Percussion’s rapidly pulsing blanket of sound—a sonic blend driven more by tuned instruments like organ, mallet percussion, and piano than the rhythms articulated with a drum kit. The layers of those components nicely mirrors that way stacks of starlings produce such a beguiling optical effect. Siegel writes, “Music like this gives listeners a chance to feel the vibrations of the sound and to live with them as part of their lives for the duration of the performance.”

Montreal’s peerless Quatour Bozzini uses overdubbing to adapt two typically intense works by Phill Niblock, originally scored for orchestra, illuminating the inherent psychoacoustic effects with breathtaking power. Disseminate was written in 1988 for Petr Kotik’s S.E.M. Ensemble; it opens with a crushing, buzzing unison, as the stacked microtonal intervals suggest a chorus of bagpipes blaring through a wall of Marshall amps. Dazzling beating and machine-like throbs surround the listener, but the unison begins to fall apart almost immediately, with painstakingly slow shifts. Like so much of the composer’s music, you don’t notice the change until you’ve reached the next location. Still, there are moments when some tonal shifts are greater and there’s no missing the stark developments, as when a few strings emit a wonderfully glassy screech around 20 minutes in. The title piece was composed for the Janacek Symphony Orchestra with the Ostrava banda in 2011. It begins with what sounds like a conventional chord spiked with dissonance, and its lengthy descent to B-flat begins with a mixture of B-sharps and C-sharps. The downward motion is inescapable and exhilarating, with tonal effects that sparkle and groan simultaneously, an impossibly thick, viscous drag that suddenly feels celebratory when the final notes disintegrate.

This English quartet established its chutzpah last year when it released a five-CD box set featuring a rigorous take on Treatise, the landmark graphic score by Cornelius Cardew completed 50 years earlier. Although Gerauschhersteller erroneously claims this is the first commercially available recording of the full score, they are likely the first to give it the duration and space it requires. Now, they’ve served up a beguiling feast of works by John Cage, dominated by some of his late, often overlooked music—many charged with the composer’s socio-political thinking. The version of the 1976 piece Branches uses organic materials collected solely from Knoll Gardens in Dorset, where this performance was recorded live, adding surprisingly rhythmic passages in a sea of crunchy, whirring abstraction. Four4, from 1991, was written for a percussion ensemble and conceived for CD, with the medium’s capacity for perfect silence. The Gerauschhersteller version plays up that bone-dry absence by using resonant percussion devices, so the strike of a cymbal can sizzle away into nothingness in real-time, making the listener aware of the sounds around them (a la the composer’s infamous 4’33”). Given the proper time and listening environment, the set allows us to reconsider both the ongoing and adapting richness of these works decades after their conception.

This beguiling epic was born of composer Michael Pisaro’s desire to organize a series of sound walks along the Grosse Mühl River in Austria, a practice borrowed from the visual artist Joachim Eckl, whose own work is deeply connected to the water. Over the summer of 2011 and 2012, Pisaro set up a series of listening stations along the water for six days straight. Activities included listening to natural sounds, listening to playback of the previous day’s sound in the same spot, solo performers aligned with the Wandelweiser Collective playing selections from Antoine Beuger’s Auch Da series, and musicians playing a Pisaro composition over a recording of another day’s work. After a long break, Pisaro assembled these vast materials into these five components—each with four 12-minute pieces—with compelling, rich results that stand on their own, but also are meant to comment on our own degradation of nature. It’s a masterpiece that promises to yield greater dividends the more time a listener invests in it.