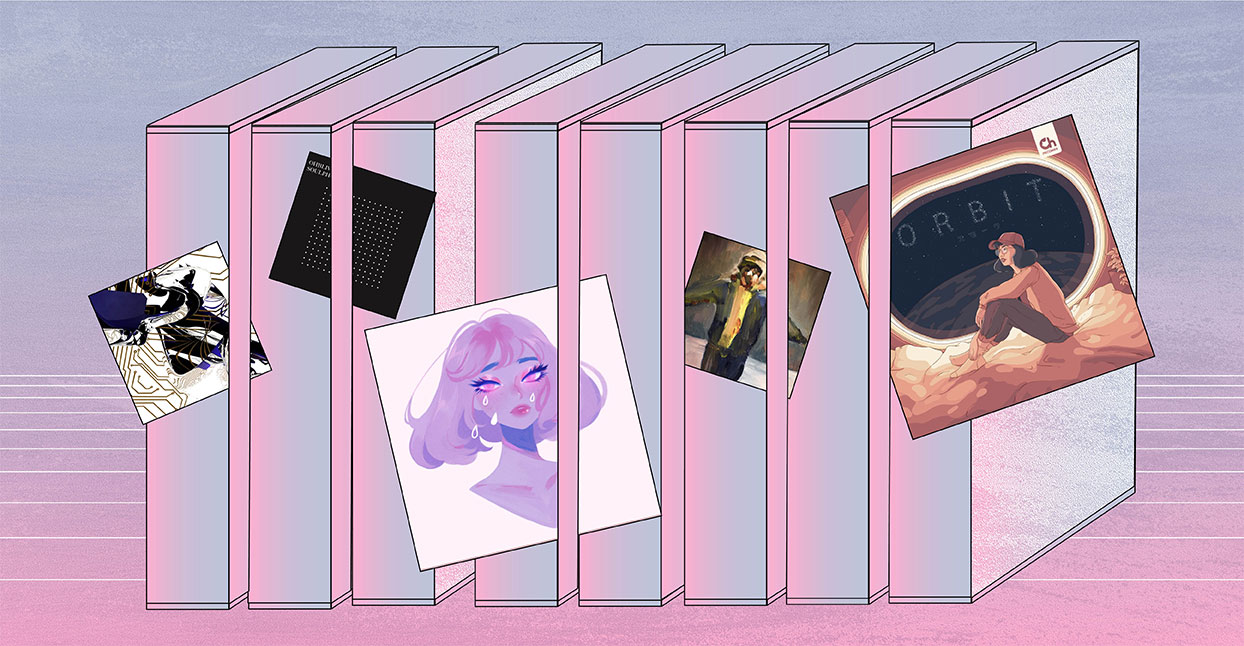 If the wealth of beat tapes released in January is any indication, inclement weather is a powerful motivator for those who work indoors. Whether you’re in the mood for dusty and knocking soul, neon-kissed chillhop, or blunted beats ripe for soundtracking your favorite anime, you’ll find them here. If you’re so inclined, buy one or all of these records. I’ve never said this before, will not say it again, and am not saying it now to be a company shill: I believe in these producers. Each month, I hope they have the means to continue making their art. It’s palm-to-forehead obvious, but there would be no column without them.

Following the release of her latest album, Somnolent Nova, the L.A. producer we know only as City Girl queried (or quipped) on Twitter, “do i really need to make a 7th album in this style tho[?]” The “style” is chillhop, the downtempo and intentionally lo-fi branch instrumental hip-hop that’s spawned a handful of highly trafficked YouTube live streams. Though chillhop is usually billed as music conducive to studying or relaxation, City Girl’s music demands your attention. It is the beat generation’s answer to the quiet storm that Sade’s band created and perfected.

So it goes that Somnolent Nova scores an endless, rain-sodden night, the darkness of a densely populated metropolitan area illumined by muted neon signs and the pastel-hued astronomical phenomena reserved for anime. This is the same world she conjured with past releases, but we are in another, equally vibrant part of the city. With more complex instrumentation, this album combines the various aspects of her aesthetic into what is arguably her best release to date. There are wistful, piano-driven suites (“Phantom Embrace”), those that combine these keys with gorgeous guitar riffs (“Radiant & Voiceless”), and others that turn voices into instruments. On the title track, she once again showcases her subtle yet impactful melodic shifts. And elsewhere, like on “Into My Arms,” where snares and hi-hats sound in trap triplet, you can hear her pushing against the soft pattering that characterizes many chillhop beats.

Does City Girl need to make a seventh album in this style? No matter her answer, I doubt anyone will be disappointed.

There’s something in the water in Virginia. The home state of Pharrell, Chad Hugo, Timbaland, Lex Luger, and Nottz continues to produce incredible producers. While he doesn’t have the high profile rap credits of his forebears, Richmond’s Ohbliv may one day be on the Mount Rushmore of VA producers. (He does, however, have credits on tracks by Tha God Fahim and Armand Hammer.) With over 40 releases to his name, he’s as talented as he is prolific.

For a sampling of Ohbliv’s past work, look no further than Retrospective, the 28-track compilation released on Paxico Records last year. If you’d prefer his latest, see the 12 tracks on Soulphonic, each of which finds fresh soil in long-tilled territory. Throughout, he captures the many moods of soul music, jumping seamlessly from the spiritually restorative (“Lotus”) to the sensuous (“If You’re Ready”) and beyond. It takes skill to pair soul samples with drums that don’t detract from their beauty, but it takes mastery to make both swing in unison. Though it’s implied, Ohbliv does just that.

Chillhop, like any subgenre, comes with its own set of conventions, some sonic (see my words on City Girl above), some aesthetic. I’m sure some view the lesser beats as expendable redundant (they can be) and the dreamy, Miyazaki-esque visuals that often accompany them as cloying (they can be). But I’d argue that the conventions of chillhop, like those specific to horror films or crime novels, offer fans a comforting baseline: the familiar isn’t wrong when done well.

So it should come as no surprise that I continue to have positive things to say about Netherlands label Chillhop Records, who release a steady stream of records that uphold those sonic and aesthetic conventions. Each of their releases has its merits, but, over the course of a year, a few rise well above the fray. This month, that distinction belongs to New York producer SwuM and his EP ORBIT. It is chillhop’s answer to cloud rap instrumentals, those sweeping and ethereal soundscapes that could score a skydiving video or the most precious, life-affirming scenes of a nature documentary. While the beats don’t hit with the same force as booming tracks from cloud rap architects like Blue Sky Black Death, their softness does not negate their majesty.

With the conclusion of Low End Theory, the Valhalla for chest-caving beats that quaked blocks in Lincoln Heights for 12 years’ worth of Wednesdays, the Los Angeles beat scene might seem unmoored. Years before LET announced its final run of shows, however, the scene was in transition, as foundational luminaries (e.g., Flying Lotus) toured the globe and left craters in their wake. But events like the 2016 LET festival spotlighted the scene’s next generation of budding emissaries (e.g., Linafornia, Eureka the Butcher). While the final LET show in August of 2018  was mostly a celebratory retrospective, Tsuruda’s set hinted at the scene’s future.

For those who missed Tsuruda’s set or haven’t checked out last year’s Unlimited Data, Internet slaps vol. 2 offers a stellar introduction to the L.A. producer’s forward-thinking, bass-heavy beats. A compilation of highly sought-after SoundCloud cuts and unreleased tracks, the record is remarkably cohesive. Throughout, Tsuruda marries the sonic hallmarks of every genre from house and juke to trap. Across every song, he drops metric tons of low-end, creating rhythms where others would only find cacophony. On tracks like “TFW you stand on the dj table [final chapter]” and “Jefferson Park,” Tsuruda pairs metallic, quasi-industrial noise with punishing drums. When you listen, you are navigating unknown galaxies on a spaceship propelled by bass that’s been calibrated to atomize asteroids; in other words, the beat scene is in excellent hands.

Excelling in one aspect of your profession can marginalize otherwise notable talents. Case in point: how often do people praise Madlib’s rhymes? Chester Watson, the now 21-year-old rapper/producer, has suffered the inverse of Madlib’s misfortune since he dropped Phantom at 15. The monotoned Floridian absorbed admitted influences like DOOM and Earl Sweatshirt and emerged with a singular delivery and lines as vivid as they are sagacious. Consequently, few pay attention to the production credits on projects like Tin Wooki and Project 0, many of which belong to Watson.

On Instrumental Tape—Watson’s first beat tape since 2015’s Autumn Mirage—the lo-fi grit and fuzz he siphoned from Adult Swim on his earliest beats remains. However, the tape also displays a newfound assuredness and range. The drums and instrumentation have the purpose and deftly calibrated pairing of Watson’s best collage artwork, which he’s used to accompany past projects. The muted synth funk and swirling, downtempo thump of a track like “Lounge” offset gloomy beats engulfed in indica smoke (e.g., “Tea”). Instrumental Tape might not be Watson’s breakout moment as a producer, but it evinces his growth and should probably score an anime adaptation of Ghost Dog.

In case you skipped my words on Tsuruda above, the future of the L.A. beat scene belongs to a new guard. Beat Cinema (BC) is its anchor. A producer/DJ crew of Wu-Tang proportions, they also run a label and monthly night of the same name. With the latter, they have taken the torch from Low End Theory, booking producers, DJs, and rappers who once graced the Airliner stage alongside innovative new artists.

Producer/DJ Wave Groove, who played LET in February of last year, is one of BC’s oldest members and ranks among the monthly’s best residents. Time Traveller Vol. 3: Lost in Time is an excellent collection of his suave, cosmopolitan bounce. Orbiting the nexus of downtempo dance music, electronic R&B, and modern funk, the album is built around thick, sensuous basslines, coruscating synths, and booming percussion. Each track—even “Mellow Box,” which utilizes a dubstep’s deep, spacey warbling—possesses an elegance that traverses the line between grand and understated. They are equally at home in a Koreatown lounge (where BC has its monthly) and a members-only rooftop bar with an ocean view that neither you nor I will probably never visit. (If you’re in L.A., visit the former.)

2017 was an amazing year for Street Corner Music, the label headed by renowned Detroit-bred DJ/producer House Shoes. While there were only six releases, each affirmed Shoes’s impeccable taste in instrumental hip-hop that’s at once reverent and progressive. Of those six releases, my favorite remains balloons, the debut album from Boston-based producer wowflower. While much of balloons showcased wowflower’s deft ability to flip and chop samples into head-nodding collages, many moments on the B-side (e.g., “rainy sunday,” “forgetit”) revealed his penchant for creating texture with organic sounds.

2019’s Self-Portrait picks up where balloons ended. Many of these lush, languid beats feel like they’ve wandered outside and osmotically absorbed the most sublime sounds en route. On “Untuch,” for instance, chimes faintly jangle underneath layers of dynamic drums and the warm hiss of a needle on vinyl, puncuated now and again by a the plops of a percussive water droplet. Wowflower employs many more styles on Self-Portrait, too. “Wally,” for instance, which is dominated by an infectious flute loop, sounds like mid-2000s Timbaland crossed with Beat Konducta-era Madlib. If you’ll forgive the pun, Self-Portrait offers a complete picture of wowflower’s talents.