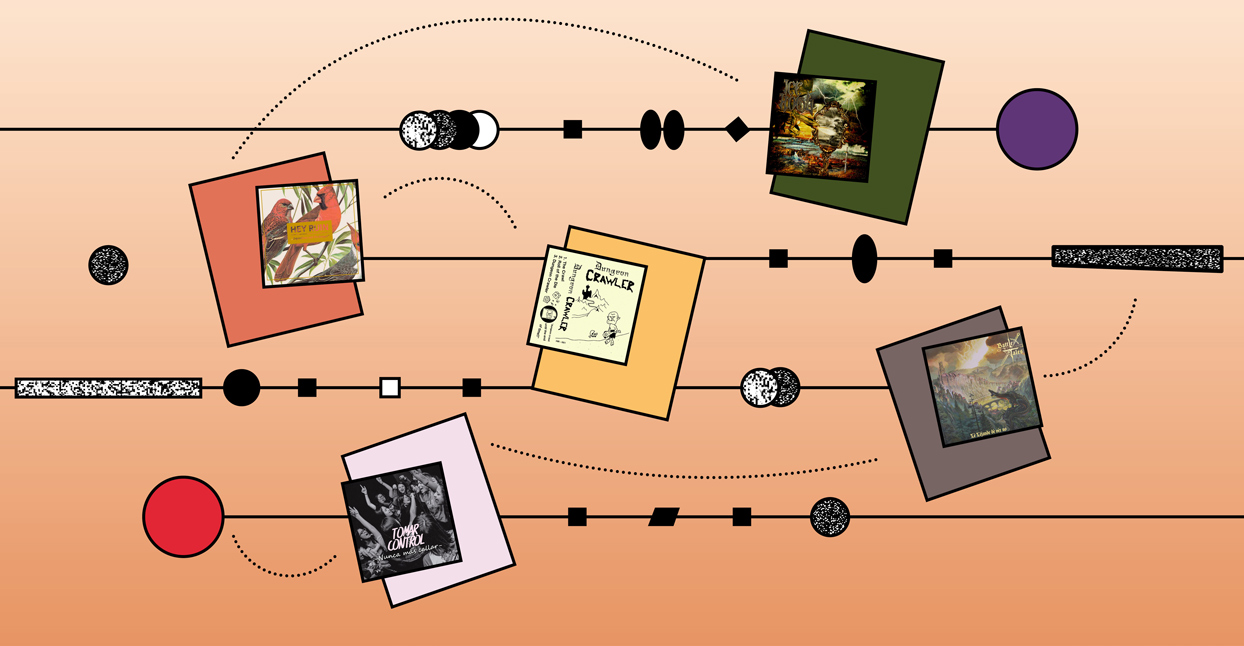 As usual, we’re starting in familiar territory before we hop out into the unknown, and in this case, it’s really familiar. I haven’t been able to stop listening to the new record by Mike Adams at His Honest Weight since it was released. I might as well share it here. It’s just the right thing to do.

Mike Adams at His Honest Weight
There Is No Feeling Better

At the end of each episode of the Glen Campbell Goodtime Hour, Campbell would walk out in front of the audience with his guitar and sing a few lines of “By the Time I Get to Phoenix,” a crushingly sad Jimmy Webb song. In this context, though, the sadness was hidden by Campbell’s conversation with the audience about the fun they’d just had and who would be on the show next week. Through it all, Campbell’s band kept playing “By the Time I Get to Phoenix.” Even though Campbell was talking about his show’s titular good times, the undercurrent of darkness remained. That same feeling saturates the new album from Mike Adams at His Honest Weight. Adams is somewhat of a modern-day Glen Campbell himself, a sharp-dressed singer/songwriter and occasional talk show host. (In fact, he even covered “By The Time I Get to Phoenix.”) These are songs of heartbreak disguised by shiny presentation. Adams’s strong sense of pop songcraft hides the desolation under shimmering arrangements and triumphant choruses, but it’s still there, a constant sense of grief.

Mike Adams at His Honest Weight are a band from #Bloomington, Indiana. There’s a whole lot of music happening there, as that tag immediately shows. Ice Howl’s album cover has a big ol’ dragon on it, so you know I’ve got to check in with that…

When you’re rolling up a new character for whatever tabletop RPG you favor, balance is the most important thing. You have to make sure that you allocate your available resources the right way to get the most out of the experience. With this self-titled EP, Ice Howl—essentially the one-man project of Jason Roach—have created an imposing force, a towering warrior that leaves nothing standing in its wake. Ice Howl sidesteps the “maximum BPM all the time” style of power metal, putting those resources instead into  reverent Black Sabbath worship with NWOBHM overtones, giving up a small amount of speed to augment the strength of Roach’s devastating riffs. When Ice Howl armors up and moves into battle, there are few who can stand in the way.

Cresting the hill in the distance, armor gleaming in the sun, Battle Tales ride majestically into battle with these four tales from the folklore of their Swiss home. The drums are galloping, the riffs are solid and propulsive, the vocals are near operatic without being overdone, and lots of the melodic heavy lifting is done here by a flute. There’s a really fine line between power metal and folk metal, and Battle Tales have a sabaton firmly planted on either side. It’s a line that many have walked before, and Battle Tales have obviously studied the history well. You can hear the source material: a little Blind Guardian here, a bit of early Ásmegin and Månegarm there, but this band’s path is their own. Onward!

Battle Tales’ power metal with #folk elements allows us to hop away from heavy metal altogether and end up in a very different place.

For years now, the Missouri State Old Time Fiddlers Association has been uploading fascinating pieces of hillbilly music history to their Bandcamp page. The latest (as of this writing) comes from Taylor McBaine (1910-1994), an electrician and champion fiddle player. The music here is presented in its rawest form, obviously recorded live with a single microphone, and this only serves to bring out its charm. This is good-time music played by musicians for the sheer joy or performing. The accompaniment from banjo and guitar, is solid and provides a framework on which McBaine’s fiddle can play, soaring, grinding, and dancing through 46 tunes here. This collection, like most releases from the Missouri State Old Time Fiddlers Association, is at once a vital historical archive of an art form in decline as well as a record of friends hanging out, having fun, and making some great music.

There’s always a good time waiting in the #hillbilly tag.

From big names like Rusty & Doug and Jimmy “The Alligator Man” C. Newman to the honky-tonk styles of Tibby Edwards and the western swing of The Hackberry Ramblers, the music of Louisiana’s Cajun community is tightly woven into the fabric of American country music. French reissue label Doghouse & Bone present 14 early Cajun tracks on this compilation that explore the more raucous side of this influential style. Driving rhythms and excellent musicianship take center stage here, but there’s enough stylistic variety to keep things interesting. The more straight-ahead country/rockabilly style is represented in tracks like Franchie Martin & Eddie Shuler’s Reveliers’ “Boogie Woogie Tout le Temps,” while Lawrence Walker’s “Opelousas Two Step” brings the Cajun accordion tradition to the forefront. Whether or not you’re familiar with Cajun music, it’s history and it’s tradition, you’re going to find something to love on this collection.

Using the #accordion tag opens up an expanse of options to choose from, but when you see a cloaked skeleton playing an accordion in the snow, you’ve got to check in and see what’s going on there.

Black metal with folk elements is nothing new, but those elements are generally provided by a stringed or woodwind instrument. The accordion isn’t commonly associated with blast beats and tremolo picking, but it fits in nicely here. Путь know the rules about too much of a good thing, though. The accordion isn’t front and center for the entirety of the album. It’s used just enough to be a unique aspect of the music, but not so much that it seems like a forced gimmick. The final minutes of “Над гробом ветхим (Above the Ancient Coffin)” show the use of this instrument to its fullest effect here, as the accordion takes the melody of the song, layered under angelic vocals, as the guitar and drums rage away. It’s a small addition that separates Путь from many of their black metal contemporaries.

Not a lot of tags to work with on this one, but #Russia is, like the nation, huge.

The guitar work on this album makes it tempting to label Дела Поважнее as “emo revivalists,” but it’s not quite that simple (and not just because something has to be dormant in the first place in order to be revived, but that’s another article for another time). There are parts reminiscent of Four Minute Mile-era Get Up Kids, but it’s all filtered through big, bombastic ‘90s-alternative-radio style production. It works. The small quiet parts are small and quiet, but when everything falls into place, this album sounds huge. This feel for dynamics combines with Дела Поважнее’s strong songwriting to produce a work that sounds fresh and exciting.

We’re staying with the theme of hopping around the more general tags after this one. The #emo tag has a lot to offer.

The spirit of late ’90s/early ‘00s Long Island DIY lives on in Cologne, Germany. Hey Ruin take the Latterman/Insurgent/On the Might of Princes blueprint and use it to build a spectacular hardcore/emo/punk structure. Riffs go from delicate to bombastic in a matter of seconds, and the vocals have just the right rough-around-the-edges quality without being grating. Hey Ruin’s songcraft is solid, capable of raging high-energy anthems like “Basic Schutzinstinkt” as well as slow burns like “Arthur Und Die Diaspora I,” where the group carefully build tension until everything boils over into a grandiose finale.

Hey Ruin tag their album as #hardcore, which creates a clear path for us—but once again I’m grabbed by cover art. That little troll holding a club on the cover is calling to me. Let’s find out more about Dungeon Crawler.

So, you and some friends have rolled up all-new characters, and you’re ready to get into some serious adventuring. As discerning tabletop game-players, you understand the importance of atmosphere to your quest, but what are you going to do when you’ve listened to all the dungeon synth and dark ambient albums you can find, and you still feel like you need something a little different? Where are you going to turn when you realize that your tiefling barbarian needs two-step mosh breakdowns in order to attack that gang of marauding kobolds? Dungeon Crawler’s got you covered. Lasting barely long enough to accompany a single round of combat, this three-song demo packs enough energy to keep you hyped for the entire campaign.

Dungeon Crawler only use three tags, one of which is #punk, which is vast territory, to be sure, but always a good place to end.

Peruvian straight-edge quartet Tomar Control have come through with an album that stands as proof that there’s still lots of life left in youth crew hardcore. Perfectly paced, Tomar Control know exactly when to slow up the pace a bit and focus on their riffs, and when to blaze ahead, heads down, as fast as possible. Singer July Salazar takes the lead on vocals, and she’s perfectly suited to the task—and, of course, a chorus of friends add the occasional shouted gang backups. Nunca Más Callar is everything one could want in this subgenre: loud, fast, positive, and full of energy.

We’ve gone from Bloomington, Indiana to the bayous of Louisiana; from the lair of a dragon to rural Missouri; from Russia to Argentina (with a few stops in between). Not bad for a single journey, really. I can’t wait to do it again next time.