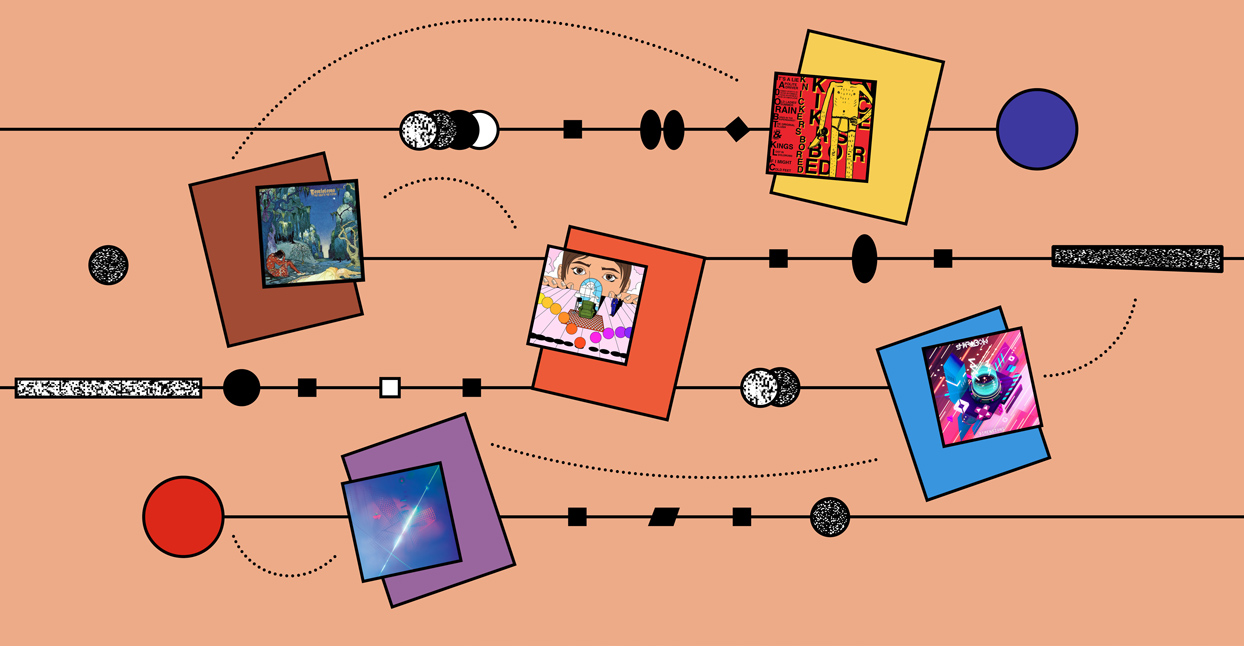 Curitiba, in southern Brazil, seems like a good place. It’s a huge city, and I’m sure it has all the good and bad aspects that are generally associated with that sort of thing. I’m not discounting any future possibilities, but I’m sure I’ll probably never go there, as much as I’d like to. It’s just the realities of international travel in this modern world, you know? Still, it’s as good a place as any to begin this installment of global travel by tag-hopping. Let’s get to know a group from Curitiba’s punk scene.

Bouncy, quick, and sharp, Vida Ruim’s second release comes blazing out of Curitiba in southern Brazil. There’s some scratchy Billy Childish influence to the guitar tone (especially obvious in album closer “Street no Flamengo é podre / Eu não sei andar de skate”) and plenty of vitriol in the vocals. Most of these tracks are straightforward “full speed ahead” numbers, but the breakneck pace slows down for the noisy “Quando seu amor volta a cidade.” The change in pace isn’t a respite for the listener, though, because that track’s masterful building of tension and the unease it creates gets the pulse racing just as fast. Onda da Morte Retrocesso is full of raw aggression, a perfect 11-minute bundle of hardcore energy.

Vida Ruim’s album is tagged with #flipper, likely a nod to an obvious musical influence. Other bands using that tag, though, are paying homage to a famous dolphin who had his own television show.

The sun comes through the blinds at a low angle. You and your friends have been sitting around all day, watching old TV shows and cracking jokes. Someone floats the idea that “Hey, we should write some songs about this”—and if you followed through with it, you’d have something like the self-titled EP from Hamburg’s Dolphin Lovers. Featuring noisy reverb-infused grunge/punk tunes in the spirit of Mudhoney with laid-back vocal delivery, at least some of which are about everyone’s favorite dolphin-based television show from the ’60s, Dolphin Lovers’ efforts perfectly capture the feeling of digging out the four-track and following through on what could have been (but thankfully wasn’t) the passing idea of a group of friends.

Dolphin Lovers’ use of the #dolphin tag is the most obvious of obvious moves. It’s applied to other albums in less obvious ways. I’m still a little confused as to why it’s tagged to our next stop, but it’s there, and we’re going to use it.

The first recognizable sound on Shirobon’s Dimensions is the 8-bit burbling of a Nintendo Game Boy. The London producer is one of a growing number of electronic artists using the iconic ‘90s hand-held video game system as their primary instrument. Using the Game Boy’s sound chip as a foundation, Shirobon layers a frenetic array of breakbeats, drum n’ bass rhythms, and non-video-game synths to create a high-energy blend of chiptune, dubstep, hardbass, and synthwave (along with probably a few more EDM styles that I don’t even know about yet). Dimensions kicks in hard from the first track, and is an unrelenting experience. As the album’s central thematic thread, the Game Boy sounds remains at the center, lending the release a sense of levity throughout.

The #cyberpunk future predicted by William Gibson, Neal Stephenson, and Billy Idol came true in ways that even those visionaries couldn’t have expected. It also gave birth to several musical genres. The next featured work plays with the intersection of at least two of them.

As the relatively-young vaporwave genre continues to evolve, it gets more interesting, seemingly by fracturing and reassembling its conventions in new and unexpected ways. Perhaps the most fascinating aspects of this ongoing evolution is an emergent fusion of vaporwave and ambient music, pushed by artists like London’s Kakumei Shojo. Looped melodies and drumlines become abstracted here; they become atmospheric, part of a pulsating, warbling fabric of sound where individual threads can often be difficult to pick out. Concentrate on one, and you lose sight of all the others. It’s best just to lie down under it and let it wrap around you; this is a comfortable and familiar sound, even if you’ve never heard it before.

Like most vaporwave and vaporwave-adjacent albums, the #cassette edition of The World of Revolutionary Girl is long since sold out. The tag, though, is eternal, and it leads us to a shed, in a backyard, in Kansas.

These two freeform improvisational tracks were recorded, per the artist’s Bandcamp page notes, “outside in a small blue shed during a gentle rain storm.” This may seem like a trivial detail—don’t millions of bands record in sheds and garages?—but the recording location is an integral part of A Pairing’s sound. Rather than excluding the environmental noises present, this album integrates them into the overall sound; the sounds of a Kansas neighborhood become an additional instrument. The barking of a neighbor’s dog, the hiss of traffic on a wet road, and the horn of a distant train all make guest appearances, accompanied by A Pairing’s acoustic bass and electronics. It’s a difficult listen, but one that’s well worth the effort.

A Pairing’s music prominently features instruments of their own design, but they still have enough #organ in the mix to make use of that tag—which leads us out of the shed, and into the forest.

Don’t let the “doom metal” descriptor fool you on this one, friends. The anachronistic A Night in the Forest has more in common with the more experimental end of the ‘70s prog continuum than the slow, plodding sounds of funeral doom, though the line connecting it with the Sabbath/Pentagram/Candlemass end of things is clear. Album opener “Fantastic Landscapes” is a pretty standard intro track which fades out as “Vulture King” kicks in with an incredibly cathy, rubbery low-end electric piano riff. “The Wild Wood” offers a clear nod to prog forefathers Gryphon with its use of medieval themes and instrumentation. This is a unique work: atmospheric, gothic (but not “goth”), and full of surprises.

After listening to The Night in the Forest, it’s not unexpected to see the #psychedelic tag lurking around at the bottom of the page. While the term may bring to mind flared trousers and paisley shirts with wide collars, psychedelia can be found all over the place these days, even in Australian electronic pop music.

Before every display screen was a flat LED or LCD panel, you could tell if there was a television on nearby without even seeing it. The cathode ray tube emitted a high-pitched tone that was more sensed than heard. I’m not sure if that sound was snuck into the mix of S U R F I N G’s latest album, but whether they did or not, this whole record is bathed in a palpable sense of nostalgia. It’s the sound of familiar music being played from a VHS tape. Moving away from their classic sample-based vaporwave roots, S U R F I N G’s third album is proof that they can craft captivating works with a more standard pop song structure, too. The vocals, present on their previous album Incubo (but often buried in the mix there), have been moved to the forefront, and this is a welcome change. The vocal delivery is smooth and laid back, and serves to further push S U R F I N G away from their vaporwave roots toward fascinating new horizons.

Given the evolution of S U R F I N G’s sound, it’s no surprise to see the #pop tag used. As you would imagine, this tag covers expansive territory. It’s difficult to find just one release to focus on, but we did it.

Good grief, this album is fun! It uses Wire-style minimalism as a base, mixing in influences from Art Brut and Devo to create this bouncy, jittery, unstoppable force. Taking inspiration from the everyday and mundane (going to the supermarket, looking at a computer), Knickers creates sharp, nerdy pop music. Ranging from the restrained, understated (and actually funny) “Polite Driver” to the screaming bombast of “Rain,” there’s variety in these 11 tracks, but through it all, there’s a sense of playfulness that never gets cloying.

Knickers are from #Leipzig. In a city of over half a million people, there are sure to be a variety of musical styles represented. Among them, we find a contemporary take on traditional folk music.

These sparse, haunting folk songs instantly transport the listener to a forest in a faraway land. One can almost feel the breeze and see the sunlight filtered through the leaves. Kupfer & Eisen use a variety of traditional folk instruments on this release, but wisely leave the focus where it should be: on their voices. Lenore Lovinne and Lyyly van de Leliesmaan have gorgeous voices on their own, but when they work together, the effect is transcendent. Sung in both English and German, this collection of songs is a portal into a serene fantasy from bygone times.

Sticking with the #folk tag, we find our final stop on this trip.

Songs of Our Native Daughters is an intense and poignant work of art. Across 13 songs, Our Native Daughters (featuring Rhiannon Giddens, of the Carolina Chocolate Drops) convey the tragedy, joy, anger, and uniqueness of the Black experience in the U.S. (and elsewhere), even to listeners who may not be a part of it. Our Native Daughters touch on bluegrass, field hollers, and griot-influenced story-songs, and occasionally bring in more modern influences (“Blood and Bones,” specifically, makes excellent use of electric guitar and bass). The modern world is represented in other ways here, too. In “Barbados” an orator recites and updates William Cowper’s poem “Pity for the Poor Africans,” drawing a straight line from slave labor on Caribbean sugar plantations to the current conditions of workers in clothing factories and the mines that produce the metals used in modern electronics. Songs of Our Native Daughters carries a powerful message, and it is materfully presented.

As the final chords of Songs of Our Native Daughters fade away, so too does our time following this particular chain of tags. From Brazil to Leipzig, from fuzzed-out TV-themed DIY to polished, political folk, it’s been a memorable trip. This map is ready to be folded up, but don’t dismay—we’ve got a fresh blank one ready for the next time.