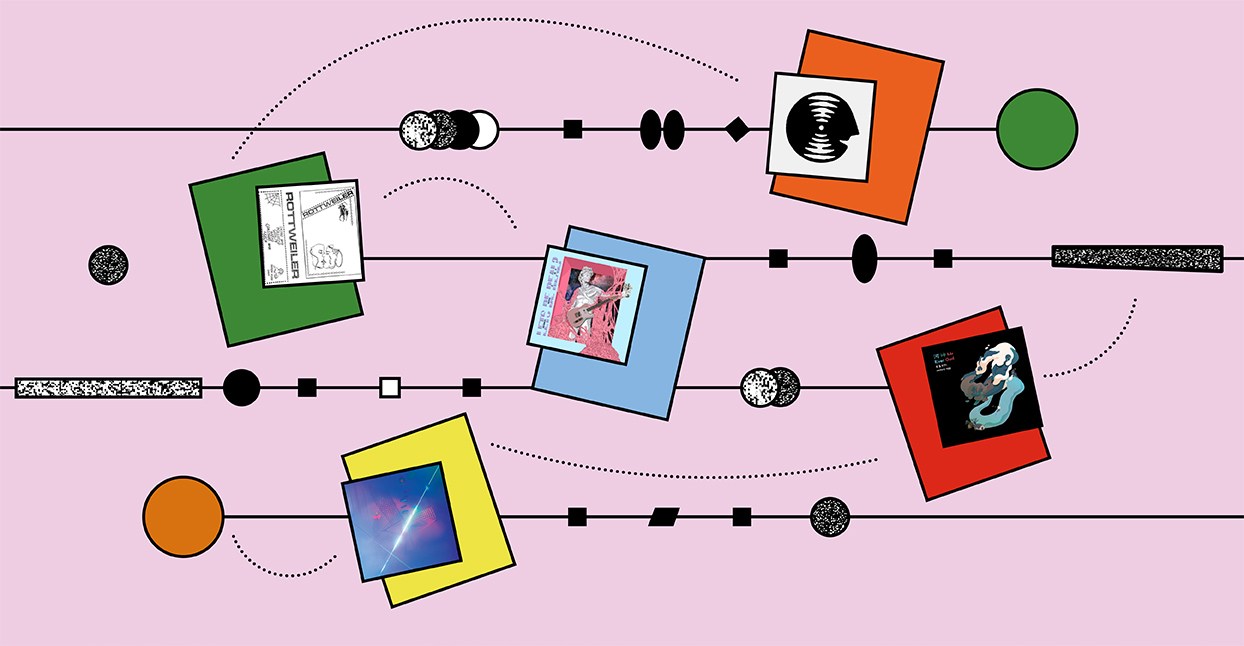 Taking the first steps on any journey is extremely important. Where you start can influence the whole voyage, often in ways that you couldn’t possibly have expected. Luckily, I’m not actually going anywhere. This is good because for the most part, I have very little interest in ever leaving my house. It’s where all my stuff is, after all. Sometimes I manage—through sheer force of will—to go out and do something, and that’s where we’re starting this time. We’re starting with a band I saw live recently.

It’s probably lazy to compare the sound of Rottweiler to their namesake, but there’s really no way around it. True to the common perception of the breed, this demo is vicious, snarling, and powerful. Rottweiler pounce right from the start, opening with a wail of feedback and going right for the throat, clamping down with deadly force on six tracks of raging hardcore. There’s no time for breakdowns here—Rottweiler’s too busy playing as fast as possible. Still, you know that deep down inside, they’re all good pups who just want to be scratched behind the ears.

Rottweiler are from #Athens, Georgia. Exploring that tag will bring up a few other bands from Georgia’s Classic City, but overwhelmingly you’ll see artists from the original Athens, the one in Greece. You’ve probably heard of it.

There’s quite a bit of variety to be found on this collection. The pieces featured on Eleusis were recorded over a span of five years, and are a document of an artist’s shifting electronic interests. Bookended by two ambient works, Eleusis ranges from minimal techno reminiscent of a more stripped-down Enigma, to a less-intense version of the early ‘90s IDM of England’s Warp Records. Eleusis is the best kind of discovery: a collection of demo tracks made by someone making music almost purely out of the drive to create. It’s obviously taken seriously, but you can feel that this work was done as a labor of love.

Eleusis is tagged the way you’d expect from an electronic/dance release. The #electro tag is a crowded one, filled with enough good stuff to keep you there for days. For our purposes, though, we have to choose just one.

Dawl + Sweel
Fall of the Humanoids

For the past half decade, Hong Kong label Klasse Wrecks has been documenting the worldwide electronic underground. This May 2019 EP from U.K. producers Dawl + Sweel is a bubbling, thumping revision of classic electro and rave sounds. There’s a debt owed here to the foundations of this sound—Egyptian Lover, Cybotron, Elektroids—but Fall of the Humanoids is a wholly modern creation. Pushing industrial synths and pounding breakbeats to the forefront, these tracks are energetic, dynamic, and—most of all—fun.

Klasse Wrecks is based in #Hong Kong, home to just over seven million people. One of them is singer/songwriter Herman Wong. Let’s see what he’s up to…

On first glance, you could be forgiven for thinking Let’s Be Real? is a vaporwave release. The cover’s classical sculpture surrounded by bright pink and pastel blue certainly nails the [ＡＥＳＴＨＥＴＩＣ]. The actual tunes are light-years away from slowed-down ‘80s R&B jams, though. Let’s Be Real? is a short EP of laid-back guitar-focused pop. Singer/songwriter Herman Wong combines shoegaze with the pop sensibilities of Matthew Sweet, the perfect soundtrack for late night summer drives.

The term #Mandopop refers, as you might expect, to Mandarin popular music, a genre that’s as varied as the population of China. But genre doesn’t acknowledge borders. The Mandopop tag is active around the world.

If Let’s Be Real? is just right for a summer evening, River God is its daytime complement. It’s bright and carefree. This Canadian four-piece breeze languidly through six lo-fi indie pop tracks that are refreshing and new, while nodding to the familiar. The Tiger Trap-inspired “Lost Angel” picks up the pace just enough to break River God’s laid-back vibe, but not so much that it sounds out of place. As the last chord of the acoustic closer “Day That Didn’t Exist” fades away, it feels like a sunset, and just like a sleepy summer day, “River God” is over far too soon.

“River God” is tagged with #parents, which seems inexplicable, but since I don’t speak or read Mandarin, I can’t be sure that this isn’t a lyrical reference that I didn’t pick up on. Regardless, it’s difficult to resist a tag that sees odd or out of place, so “parents” it is…

Atlanta-based Mark D. Pencil makes educational music for kids. But that’s too simple, really. These songs are also off-kilter, bouncy electronic works that get deeply weird at times. If the children’s music of electronic pioneer Bruce Haack were filtered through the modern lens of the musical sketches of Tim and Eric, the result would probably be close to what’s found here. As endearing and interesting as this music is, it’s important to not lose sight of the very real educational content here. Important, but also very easy. It’s hard to think about the fact that you’re actually learning when you’re listening to something as boisterous as the dance remixes of “¡Feliz Cumpleaños!” that close out this album.

Mark D. Pencil’s music is unsurprisingly tagged as #educational. Standing out among everything you might expect from that tag is a six-song demo from an Italian punk band.

With reverb-drenched vocals and convulsive guitars, Education’s Demo sits squarely on the continuum of goth-influenced punk alongside foundational acts like The Damned and Parálisis Permanente as well as contemporaries such as Cemetery and Pawns. While the debt owed to deathrock is obvious, Education aren’t interested in moping around the catacombs in billowing black capes. The rumbling bassline of standout “Head on a Stick” is powerful enough to raise the dead. Education’s Bandcamp page promises a new album soon, and this demo is more than enough reason to look forward to its release.

Education’s demo is tagged as #wave. There’s usually a prefix attached to that one, but not this time. It could be any kind of wave you want it to be.

Automelodi, the studio creation of Quebecois multi-instrumentalist Xavier Paradis, sounds exactly like a suggestion of what one would think the platonic ideal of synth-pop from the ‘80s would sound like—an imagined version of nostalgia. It’s an original sound that draws on the past, filters it through a strong reverence for the subgenre’s foundational acts, and introduces it to the modern world. It would be easy enough to prey on sentimentality by turning on a drum machine and blooping away on a synthesizer, but Automelodi’s strength is in the songwriting. These are well-crafted works that pay homage to the past while looking towards the future.

Along with the generic “wave” tag, Automelodi brings a little more specificity into play, pinpointing this release with the #darkwave tag. This one encompasses a wide variety of artists from ‘80s goth and synth-pop revivalists to artists making deep atmospheric drones.

Harrogat’s Conquer is sinister, creeping ambient music. Extended low frequency drones create a perfect sense of dread and impending doom here; this is the sound of vast, empty spaces. There are murmurs in the darkness that are more than just the standard 60-cycle hum, sounds that are felt more than they are heard. These are the sounds of something monstrous and unseen, looming overhead. Whatever it is, it lurks just beyond the edge of the shadows, vaguely perceptible, but not firmly taking shape. It’s moving slowly, heavily, and it’s headed in your direction.

The #noise tag is probably most often associated with power electronics or harsh noise wall artists, but it’s a malleable category. It can include Harrogat’s drones or clamorous punk.

Szmej’s demo manages to get everything right about DIY punk. It’s got an enigmatic hand-drawn cover, sub-two-minute song lengths, whirlwind guitars, and vocals that sound like they’re being shouted from down the hall. Opening with the breakneck “HEX,” featuring shouts that sound like coyotes howling in the distance, Szmej move through just over six minutes of stomping lo-fi aggression that varies in tempo from “really fast” to “slightly faster than mid-tempo,” but always maintains the burning intensity that’s at the heart of this genre.