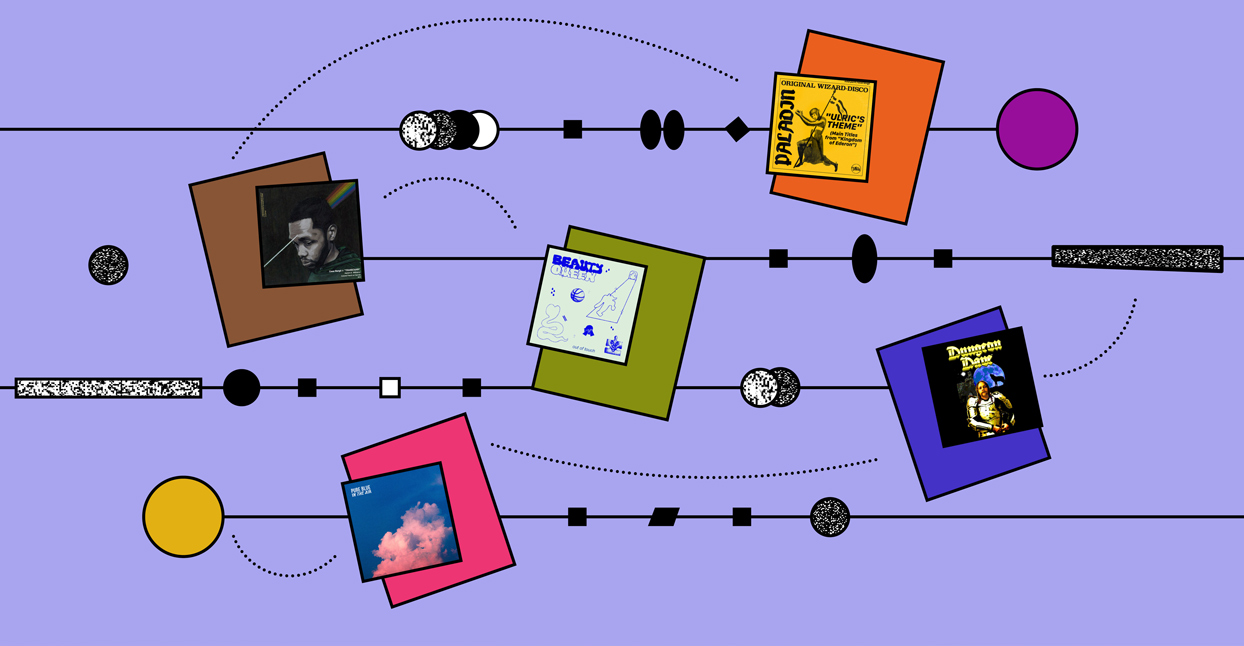 The first real job I ever had was manning the late afternoon/early evening DJ slot on a gospel station in south Georgia. I’m hesitant to name names, because even though I’m pretty sure they’re off the air by now, I’m not trying to out anybody for paying a 13-year-old to play records two or three nights a week. Having this experience meant that I knew just as much about gospel music as most teens knew about pop music at the time. This was during the defining years of my musical tastes, and I still listen to a lot of the stuff that teenage me was into. This is true for most people. I still like to check in with #southern gospel every now and then to see what’s going on. It’s a strong hit of nostalgia, bringing me back to those evenings playing records for all the gospel fans in town (if there wasn’t a baseball game).

Exodus
Give Him Glory

All of the classic elements of southern gospel are present on Exodus’ album, and they’re deftly used. Harmony is a foundational aspect of the style, but there’s some outstanding vocal work on Give Him Glory. The female voices on “Until I’m Home” move together effortlessly, soaring above the instrumentation and bringing to mind Rites of Passage-era Indigo Girls. Exodus isn’t afraid to look to just outside genre boundaries. Album opener “God of Always and Never” bridges the gap between southern gospel and bluegrass (or “hillbilly”) gospel, bringing out the banjo and picking up the pace, providing a fresh new take by looking back into the genre’s past.
Exodus (who have, I’m certain, never been confused with the other Exodus) are from #Gadsden, Alabama. One of the benefits of “tag hopping” like this is finding good things going on in places I never knew much about. Gadsden is home to Beat Monkey Productions and its co-founder Phon Doe.

Phon Doe’s beats walk the line between chilled-out and ominous. Each track starts with a shiny synth hook and gradually adds elements—jittery beats, rumbling basslines, eerie vocal loops—until the whole track is fully realized. “Parallel Universe” follows in the trap-influenced footsteps of Vaperror’s Mana Pool or Windbreaker’s Overcast City but adds a lurking sense of menace, a threat hiding just beneath the calm surface of these placid waters. This overarching tension between the idyllic and the dangerous, in turn, ensures a compelling, rewarding listening experience.

Phon Doe’s beats are, as you might expect, tagged as #instrumentals, one of bandcamp’s most popular tags (both in its singular form, and in the plural as it’s used here). We’ll use this tag to jump from northeast Alabama to southeastern China.

There’s no shortage of “heavy” prog albums that feature folk instruments, but Zhaoze’s Birds Contending | 争鸣, which uses Chinese xaio and an electric version of the traditional guqin as a focal point, is a bit of an anomaly. The construction and composition of this single album-length track avoid treating the traditional instrumentation as a gimmick, but rather as a natural extension of Zhaoze’s sound. Ranging from Explosions in the Sky-style bombast to more idyllic passages reminiscent of The Snow Goose-era Camel, this album is a wonderful example of musicians acknowledging their folk roots and using them as a foundation to build something new and interesting.

Although it’s grounded in a folk tradition that is very much of the Earth, Birds Contending | 争鸣 is tagged as #space rock (among several others, all of which manage to be apt descriptors). You know what’s in space, right? Planets, that’s what. Probably at least half a dozen of them. Let’s check in on one.

One of the more fascinating byproducts of space exploration is its soundtrack, supplied by the electromagnetic vibrations planets and other astral bodies emanate as they move about the cosmos. Recent advances in technology have made it possible for scientists to document these strange frequencies and share them with the world; inevitably, some of the stardust found its way into experimental compositions like Jupiter, a one-track album from the the German synthesist Frucht-Schleifen. By leavening the flowing sounds captured from our solar system’s largest planet with minimal, modernist electronics reminiscent of the Berlin School, the composer makes his awe-inspiring source all the more intoxicating.

Sometimes it’s nice to use the tags as a way to pull back, to widen the focus of your search. Jumping to an incredibly broad general tag like #electronic is a good way to get a feel for the sheer scale of what’s out there waiting for you to hear. It’s overwhelming, really, and that’s part of the fun of it all. But we can only choose one for the next point on our map, and there’s one with a 20-sided-die on the cover, so let’s see what’s going on over there.

Ogre
I: Lords of the Black Citadel

Ogre has years of work on Bandcamp spreading out across the “darker side” of the synth spectrum. He’s created soundtracks for literary works by J.G. Ballard, an ’80s-inspired indie video game, and gritty action films that don’t actually exist. He’s made records of live sequencing performance and explored the post-holocaust Earth of the year 2023. It was only a matter of time before Ogre packed up his synths, grabbed his dice bag and cloak, and descended into the dungeons. “Lords of the Black Citadel” is the sound of Ogre reverently acknowledging the influence of the ever-expanding world of dungeon synth while creating a work that sonically fits in with the rest of his catalog. Selections from this album such as “Barbarian” and “Passage Beneath the Frozen Lake” conjure imagery of slowly feeling your way through a dark, unfamiliar cavern while the pulse-pounding “Claymore” is the perfect background music for the inevitable battles waiting below.

The soundtrack to any #Dungeons & Dragons session is often an integral part of the whole experience. But the mood shouldn’t always be somber and brooding; sometimes, you just want to dance.

After your band of clerics, barbarians, wizards, and half-elf druids have vanquished whatever otherworldly beast that was hiding beneath the castle at the center of town, there’s no better way to celebrate than having the bards down at the tavern grab their flutes, lutes, and drum machines for a classic medieval disco. No bards in your party? Don’t worry. Paladin’s got you covered. “Ulrich’s Theme” provides two tracks of Italo-disco influenced adventure music suitable for quests and exploits in all imaginable realms. After the festivities have run their course, B-side “Faerie Liquid” provides the peaceful respite needed to drift into a deep sleep and regenerate those hit points for the next campaign.

Surprisingly, Paladin isn’t the only music using the #wizard disco tag. It’s my hope that by offering it a tiny not of exposure here, more artists will start contributing. It’s the genre I’ve always wanted, but never knew until now.

Remember that syndicate late-’80s/early-’90s TV show about a band of knights from another world who fought crime with modern technology that was mysteriously transported to their lair through, maybe, a wormhole or something? It’s OK if you don’t remember this because I just made it up. Even though that show never existed, Dungeon Dave somehow managed to create the soundtrack. Imagine the crime-fighting duo of a mage and cleric, cloaks flowing in the night air, jumping into Airwolf to rid the kingdom of the scourge of the Slime Creatures. Dungeon Dave has already scored the whole episode, and it’s the perfect accompaniment.

Are there many dungeons in #Melbourne? There’s got to be at least one, because that’s where Dave’s from, and you’re not gonna call yourself “Dungeon Dave” without having access to at least one dungeon. But we’re going to leave the subterranean behind and climb out into the light to see what else we can find in Australia’s City by the Bay.

Pure Blue
In The Air

In the Air is hazy, dreamy electronic pop that drifts languorously along the boundary between post-vaporwave futurepop and peak 120 Minutes-era alternative. In these songs, you hear the VHS decay-soaked sounds of George Clanton’s work on the 100% Electronica label blowing in the summer breeze alongside the sparkling guitar of Joy 1967–1990-era Ultra Vivid Scene. These tracks move effortlessly from echoey laid-back songs like the ambient album opener “Dream On” and the more uptempo (but still not so fast that you feel the urge to get out of your hammock, if you don’t want to) guitar-driven “Time of Our Lives.” This is a perfect summer album, a feat made all the more impressive when you consider that it was released right at the start of winter in Pure Blue’s Melbourne, Australia home.

The #bedroom pop tag offers way more variety than I initially thought, and there’s a lot of great stuff in there. We’re going to hop across the Pacific to southern California for our next stop.

Beauty Queen
Out of Touch

The realized vision of L.A.-by-way-of-Hawaii musician Katie Iannitello, Out of Touch sounds like music made by ghosts. They’ve given up their clanking chains, and they’re floating from room to room playing swirling organs and jangly guitars as the morning sun streams through the curtains. The vocals sound like they’re coming from down the hall or out of a phone someone left on the couch. Beauty Queen combines this bright, otherworldly sound with solid songwriting and sharp pop hooks on this debut EP.

We’ll make one last stop here in #Los Angeles, a city with enough music scenes to hold our attention for way more time than we have here.

There’s probably a word in some other language for feeling optimistic and anxious at the same time. “Bittersweet” doesn’t really hit the spot I’m aiming for, and like most Americans, I’m limited by the awkwardness of only knowing one language. Whatever that word is, the feeling it’s meant to convey is perfectly captured in Case Bargé’s Transcend. His lyrics are filled with positivity, with hope for the future, while at the same time acknowledging that the present, well, it’s not the best. Case’s smooth delivery combines with the breezy backing tracks and solid production to give additional impact to his message. Transcend features multiple guests, all of whom lend their talents to make Transcend a varied and thoroughly engaging experience, but Case Bargé vision remains clear at the heart of it all.

With that, or latest journey is at an end. Thanks for coming along for the ride.