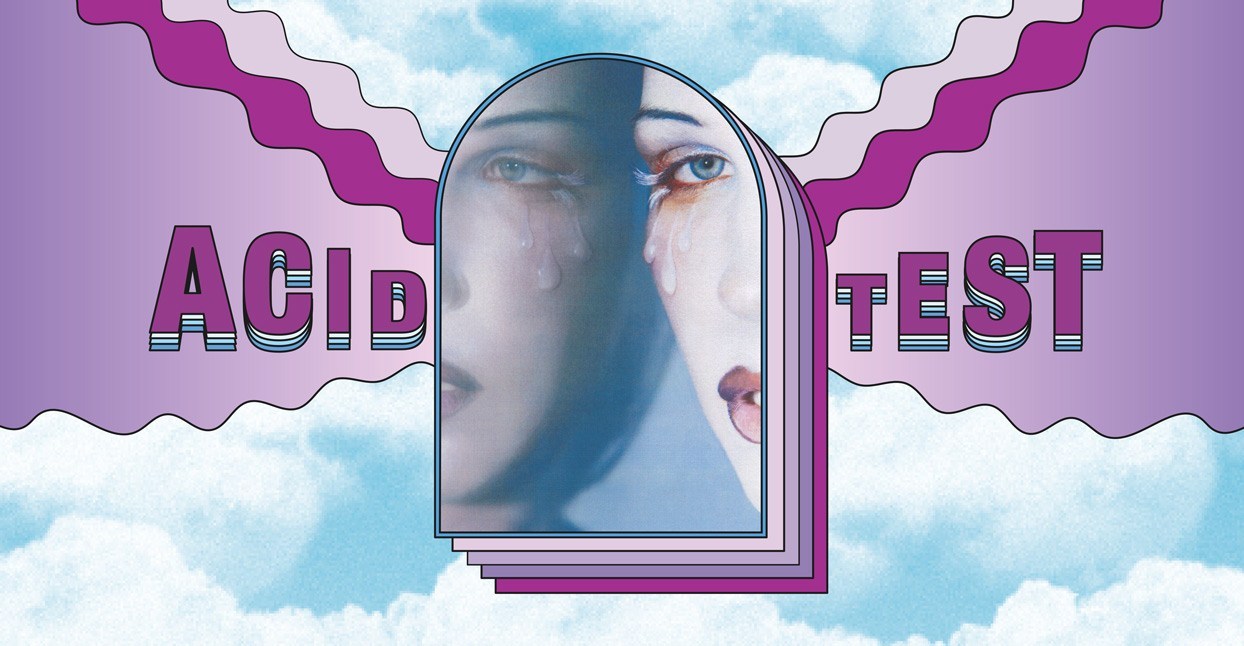 Bandcamp’s outer limits continue to be a rewarding place for psychedelia, experimental club music, noise, vaporwave, and the wholly uncategorizable. In this volume of Acid Test, we look at electro-acoustic earworms, a playful noise album perfect for your haunted house, and a surreal audio transmission about Avatar that acts as a prologue one of the year’s strangest and best albums.

Alexandra Drewchin’s music has shapeshifted countless times over the course of the decade. She screamed and bellowed with psychedelic noise rockers Guardian Alien, then changed course completely on her intimate and delicate albums as Eartheater for Hausu Mountain. On last year’s IRISIRI, for PAN, she signaled another change in direction, this time creeping toward club music. And yet for all that evolution, her voice has remained unmistakable—and on the remarkable new Trinity mixtape, it’s never been clearer.

Recorded earlier this summer in New York, Trinity is an even deeper dive into club music. Drewchin’s elastic voice is always at the center, with producers’ beats carefully fashioned around it. AceMo ignites the first half with the energetic one-two punch of “High Tide” and “Supersoaker,” but Trinity shifts into headier space with the pair’s angular and ethereal “Pearl Diver” and the Tony Seltzer collab “Lick My Tears.” By the time you get to the appropriately titled closer “Solid Liquid Gas,” it’s clear Drewchin can masterfully melt, freeze, or sublimate without losing any of what makes her special. At this point, it seems like she can do anything.

William Harrison King first appeared as a club music wunderkind dropping essential EPs like 2015’s Bleeds Colors and Puddles on UNO that merged club music, ambient, grime, glitch, and trap music. His work evolved even more on last year’s massive two-and-a-half hour outtakes compilation detritus preterit selections, which overflowed with club bangers and songs recalling everything from William Basinski to Xiu Xiu. King has been slow to circle back to his fiery early work, but only because he’s so methodical in exploring new forms, like this hypnotic three-track release gros recurs. Opening with a spindly, seven-minute loop that sounds like it was snipped from the ‘90s SquareSoft videogame catalog, each track stretches and bends in a way that recalls the early days of vaporwave. It ends with the sparkly groove of “Music For Jet Skis Pt. 1,” a knotty looping track that seems to squeeze out more serotonin with each of its 11 minutes. I’d be excited for Sharp Veins to make club music again—he’s really good at it—but I’m also in no rush, when his detours are as incredible as this.

Sound artist Galen Tipton makes a marvelous and alien debut on Orange Milk with fake meat, which doubles as a showcase for many other like-minded producers. The album is rife with brilliant collaborations, including Holly Waxwing on the hyperdriven ASMR of “Orchid Mantis,” Woopheadclrms on the atmospheric “Mouthblood,” and OM co-founders Seth Graham and Giant Claw making appearances on the fractured orchestration of “Gummy” and the stunning pop centerpiece “Touch.” fake meat also has remarkable pop moments, sounds that veer closer to PC Music and Katie Dey than anything in Orange Milk’s past. But it’s just as compelling for how often it veers in the opposite direction. For every earworm like the infectious Rkss collab “Sissy” or closer “Tender,” there are electro-acoustic whirligigs “Pillow Fight” and “Horomones” with G.S. Sultan. Taken all at once, it’s a whole breakthrough for the label, courtesy of their best new artist.

Guerilla Toss
What Would The Odd Do?

Guerilla Toss returns with an EP that sounds more alive and energized than their last few full-lengths. Energy has always been essential to GToss, whose early days as a Boston staple at the start of this decade were unrivaled in intensity and rhythmic power. That excitement returns on tracks like “Moth Like Me,” one of the most thrilling rollercoasters the band has ever constructed. But what’s new is the ability to read along with Carlson’s lyrics. It’s a game-changing choice, as clever turns of phrase and surreal imagery seem to spill out of her. The short release ends with the funky, stomping closer of “Land Where Money’s Nightmare Lives,” where the helplessness and anger with a planet “melting with no audience” merges with vivid images, like sleeping in the water of a melting ice cap. The EP is powerful and cathartic, but it doesn’t sound all that different from the Guerilla Toss you may know and love.

Despite the name, Russian Library records is actually a new label based in Lisbon, Portugal. Each of the first three releases debuted this month follows a similar format, with a pair of experimental artists taking up two sides of a 7” single. It’s a format that feels made for punk, but each installment offers an experimental synth odyssey in miniature veering from João Paulo Daniel’s kosmiche soundscapes under the names Folcore Impressionista and Aural Design to Supernova’s playful YMO-inspired “Dare” and the fractured club of Ondness’ “Volta da Ajuda.” If I have a favorite, it’s the double-dose of abstractly chirpy electro-acoustics from Demónio António and Vuduvum on volume three, but all of these bite-sized experiments are worth your time.

No record is more perfect record for blasting out of your haunted house than Axis, the deliriously freaky new album from Kill Alters bandleader Bonnie Baxter. Over tightly looped samples—that are as enticing as they are maddening—Baxter cackles, chatters, gags, and screams. At any given moment she might giggle like The Twilight Zone’s killer “Talky Tina” doll, deliver a death rattle straight out of The Grudge or, as on the hypnotic “Spirit Enema,” make you laugh with some surreal pitch-shifted punchline that sounds straight out of a Longmont Potion Castle prank call. The best moments come when she blends into the loops entirely, using her repeating vocalizations like collage camouflage, before striking with the next surprise. It makes for a one-mutant Monster Mash, best set to repeat, and paired with Halloween candy and nitrous.