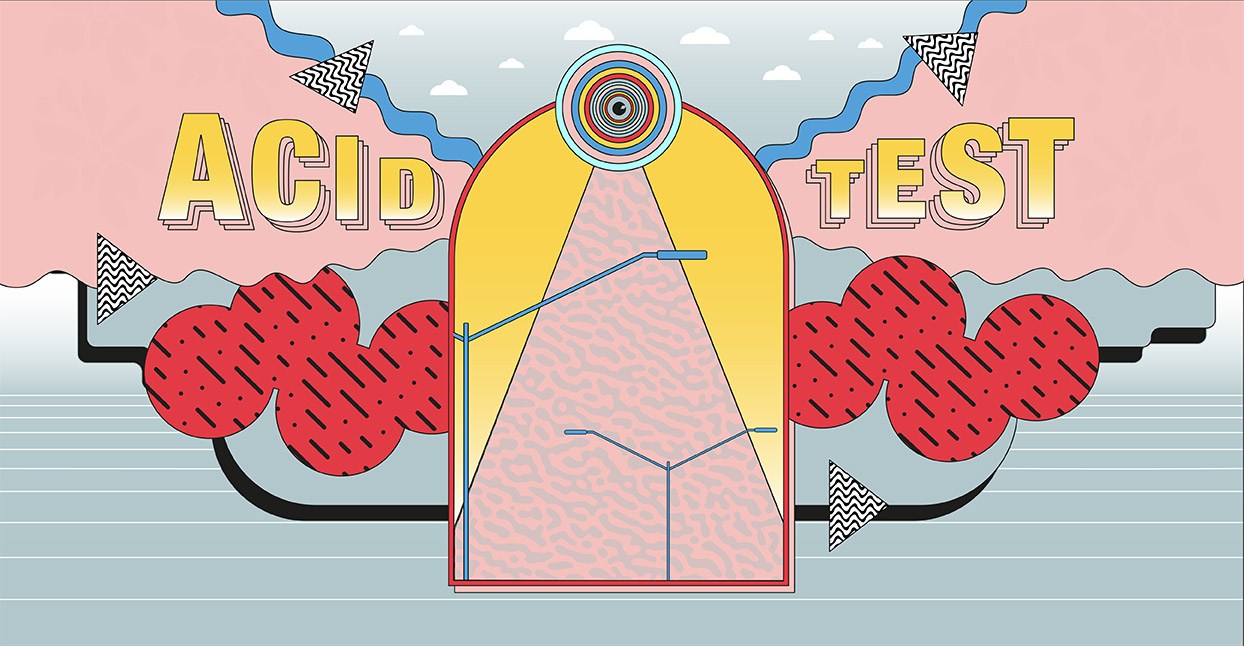 In addition to riotous rock, joyous jazz, and hard-hitting hip-hop, Bandcamp is also home to music that stretches the limits of psychedelia, noise, ambient, and nascent genres like vaporwave. Each month, Miles Bowe digs deep through the site’s obscure corners, to bring the most strange, brilliant, and sometimes emotionally powerful releases back up to the surface. This is Acid Test.

The Russian and Belarusian avant-garde groups Mecizand and Simulacross craft a dark union on the fantastical, occult collaborative album Šljahtic Zavalnja, Abo Bełarus u Fantastyčnyh Apavjadannjah. Alongside a few key guests, these 15 musicians map a murky path through folk music, free jazz, and dark ambient, tied together with distinct touches of musique concrète. Though they are all credited on many of the tracks, Simulacross favor songs that feel built to invoke a trance-like state—like the bluesy and ritualistic “Vasil”—while Mecizand focus more on atmosphere building, as on the tropical dark ambient of “Vužovaja Karona.” What ties everything together is guest singer Irina Hlushets who, in addition to playing cymbals, lends her haunting vocals to four tracks. Occasionally bringing to mind Yoko Ono’s distinctly wavering delivery, Hlushets unifies both bands into one vivid séance on “Narys Paŭnočnae Bełarusi” and “Ad’ezd (Zakančenne).” It provides just the right ectoplasmic adhesive to both bands, making Šljahtic Zavalnja, Abo Bełarus u Fantastyčnyh Apavjadannjah succeed exactly where most collaborative albums fail.

Experimental label Hausu Mountain has gradually become one of the weirdest, most fun, and most positive parts of Chicago’s music scene, a trifecta of qualities that have also made veteran rapper Sharkula a beloved local artist for decades. On Prune City, his collaborative debut for the label (made with co-founder Maxwell Allison, aka Mukqs), Sharkula sounds as much an alien as his friend and collaborator Kool Keith. His scatterbrained freestyles float comfortably through Allison’s colorful, woozy soundscapes on “Expand Your Mind” and “The Love Boat,” which build to clever lines and hilarious ad libs. Other tracks, like “Hitchhiking on the Mic Device” and “Bigass Beard,” allow Allison to make some of the hardest, heaviest sounds of his career. Bonus points to Mukqs for throwing a Street Shark on the cover (Ripster no less, the coolest of all the Street Sharks!) and also to Sharkula for his many appearances on legendary Chicago public access children’s dance show Chic-a-Go-Go.

Terre Thaemlitz is well-known for her transcendent house music as DJ Sprinkles and for ambient epics such as the 30+-hour Soulnessless, but one part of her discography ripe for rediscovery is her earlier work usually found on Mille Plateaux, the experimental label best known for the works of Gas and Oval. Comp x Comp collects a treasure trove of fascinating pieces from that era. One immediate highlight is the previously unreleased “Mille Glaces” suite, made for a canceled Mille Plateaux compilation, that layers 1,000 different minute-long audio tracks and is paired with nine shorter versions that caused her Power Macintosh 7100 to crash. Surrounding that are hidden gems, including musique concrète experiments like “ffwd3_DVD_06_tt” (her pass on an “exquisite corpse”-style piece shared from artist to artist), a bleary ambient remix of “House Music Is Controllable Desire You Can Own” (from the DJ Sprinkles masterpiece Midtown 120 Blues), and the breathtaking deep cut “Sex On A Real Train” from a 2006 Ghostly compilation. There’s even a field recording of Memphis rap pioneer 8ball blasting through a Japanese department store, a downright magical moment somehow captured in time and slipped out on a field recording collection for Lawrence English’s Room40 Records. Paired with fascinating liner notes included in the info section of each track, it’s the cherry on top of Thaemlitz’s newly launched Comatonse Bandcamp page, which is already full of rare and out-of-print releases.

Duppy Gun founder Cameron Stallones’s long-running Sun Araw project has taken many forms over the years, but can always be counted on for deep-fried psychedelia. This NNA Tapes release from S. Araw Trio XIII (which features Stallones alongside Tomo Jacobson and Jon Leland) works especially well, splitting its 53-minute runtime over two side-long spaceouts intended to represent day and night. “Hermeto Tume” sounds appropriately sun-baked over its 20 tropically-tinged minutes, but it’s the even longer night-themed “Mantis Suite” where Sun Araw get to stretch out to their spaciest limits. As the rhythms are stripped back, the trio push even further into pure atmosphere, giving room for their increasingly alien textures to grow. It’s a format that makes sense due to the improvised and live-recorded origin of the album, but it also captures Sun Araw completely in their element.

Anthony Braxton calls GTM (Syntax) 2017 “the Rosetta Stone of my music systems,” a fitting comparison for this gargantuan 12-hour collection which lays out the legendary jazz composer’s mental processes like dense computer code. GTM stands for “Ghost Trance Music,” a compositional system Braxton developed with his Tri-Centric Vocal Ensemble, a group including vocalist (and co-producer) Kyoko Kitamura, singer and composer Kamala Sankaram, opera singer Roland Burks, and more. Rather than composing, Braxton acts more like a programmer, developing a system that offers a seemingly endless set of variables, allowing the ensemble to generate the piece in real-time. Over each of the dozen hour-long variations, the singers stretch the limits of the human voice in nearly unimaginable ways, flying through operatic passages of long number combinations and repeated words that would seem random if the arrangements weren’t so staggeringly complex. Settle into any one moment and you might be caught off-guard by a death metal scream, a dive into doo-wop, a flutter of stuttering syllables, or just the loud blurt of a raspberry. Taken in one-track doses, it’s an overwhelming achievement of composing, performance, and group improvisation. I wish we could shoot it into outer space for the aliens to hear.

Over the last few years, Baltimore artist Danny Greenwald’s Glassine project has found clever ways to experiment with field recordings, such as the 2015 album No Stairway, which was built out of recordings made in a Guitar Center, turning what must have been pretty hellish source material into heavenly ambient music. Although Glassine still sounds quite beautiful, Greenwald has gradually turned the project in a more socially-conscious direction, utilizing sources too powerful to sink into an ambient music lull. He turned a recording of the 2017 Women’s March into “Day 1,” a graceful soundscape articulating the uneasy mix of fear and hope captured in the weeks after Trump’s inauguration. With the new charity single “Éxodo,” a piece built around an interview with an undocumented Guatemalan mother, Greenwald has released his most powerful work yet. Hearing her words, and the fear and frustration in them, was so powerful that Greenwald leaves the recording largely untouched, simply letting his equally wounded drone form a frame around it. The music only takes over at the end, when Baltimore artist Ami Dang delivers her fragile sitar solo as a coda on the entire breathtaking construction. The delicate construction of “Éxodo” is key to how hard it hits you, and for Glassine it feels like a complete creative breakthrough.

If the nightmarish TV channel from David Cronenberg’s Videodrome offered a daytime children’s programming block, the result might sound something like the wonderful delirium contained inside Polish web series Poradnik Uśmiechu (“Smile Guide”). Each deeply strange volume (hosted by the equally genial and creepy host Agatha) fuses animation and tape-damaged video to craft surreal educational TV in the spirit of cult classics like Wondershowzen, Look Around You, and Off The Air. The best part of these extremely psychedelic transmissions is the soundtrack from creator Wiktor Stribog, which received an official release this month. Stribog’s lo-fi soundscapes drift from saccharine to queasy, matching Poradnik Uśmiechu’s unsettling atmosphere. Hearing them in expanded versions show just how skilled a composer he is. There are passages that recall Geogaddi-era Boards Of Canada (“Słoneczna Ziemia”), the foggy acid house of Palmbomen (“Konfrontacja”), and warped funk like “Ballada w Rytmie Dżins” (which brings to mind Serge Gainsbourg’s “Ballade De Melodie Nelson” on too many shrooms). Hauntological music has floated around since the ‘90s, but rarely has it actually sounded this haunting.