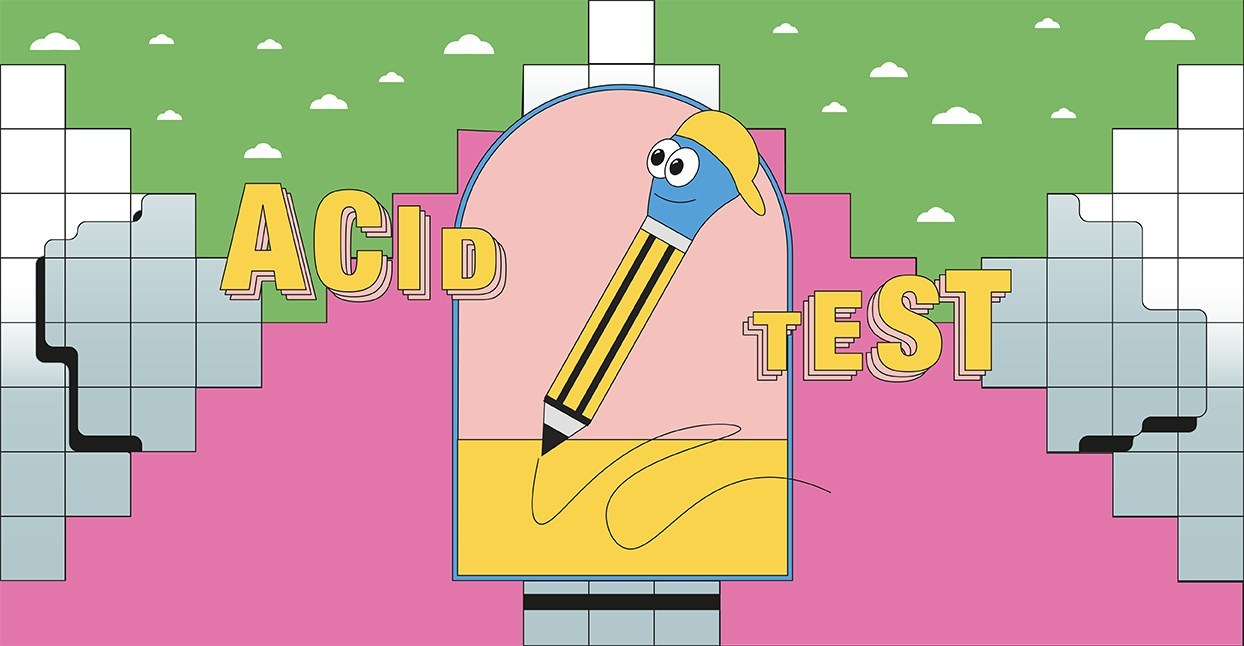 Bandcamp’s outer limits continue to be a rewarding place for psychedelic music, noise, vaporwave, and uncategorizable strangeness. In this volume of Acid Test, Miles Bowe digs up a snowy vaporwave gem, a music legend’s tribute to a late cult movie actor, an alternate soundtrack to a horror classic, and multiple highlights from Indonesia’s experimental scene. Find all that, and an anthropomorphic rapping pencil, below.

For ‘90s kids from the Northeast, the blizzard of 1996 holds a special significance. Days of heavy snowfall resulted in four feet of snow, transforming backyards into sloping arctic landscapes. If you didn’t live through it, fear not: the anonymous producer Blizzard 96 beautifully renders their own memories of the event on this impressionistic vaporwave album, built entirely from Weather Channel reports. The buttery Muzak and mundane chatter in the samples turns out to be the perfect source material for vaporwave’s loops and delays. The album unfolds chronologically, from “Saturday January 6th 1996” to “Monday January 8th 1996.” “Snow Fall Potential,” which is built from early forecasts, trips along on a skipping sax line, and songs like “The Blizzard Begins” and “Snow Is Coming Down” offer vivid, moment-by-moment snapshots of the event. The album gains even greater significance after reading Blizzard’s personal experience with the storm—it was a magical moment for a kid shortly before their parents’ divorce and subsequent moves which made life harder. “For years after this, I would hope for another snowstorm of that magnitude,” they write in the album notes. “It never happened, and eventually snow became less fun and more of a hassle. This blizzard was once in a lifetime, and everything preceding it is lifetime away.” Blizzard 96 serves as a tribute to those memories, and it’s one of the best vaporwave albums in recent history.

A good rule of thumb on Bandcamp: if the artist identifies as a witch, it’s probably a good album. I don’t have an explanation for this, but it’s never steered me wrong. Witches just make good music. The Kingston, NY collective behind AmeliaMoon build the dreamy industrial soundscapes of ET using banjo, hammered percussion, and heavy waves of synth; they sculpt dark landscapes with bottom-heavy electronic pulses, but balance them with delicate touches that either make the track lighter—like the chirpy synth wandering through “Blood Magic” that sounds straight out of Raymond Scott’s Soothing Sounds For Baby—or even more unsettling, like the chiming percussion haunting opener “Fullness.” ET is full of twists and turns, like the mystical spoken word piece “Edrathil” and “Ivy,” a knotty atmospheric piece built on guitar distortion. Any given track of ET can be a disorienting listen, but they work together to create a spellbinding whole.

Aftermaths 2: The Noise in Indonesia

Last fall, the Chicago label Groove Cafe released Aftermaths, a sprawling compilation of the city’s experimental scene, to raise relief money for Puerto Rico after Hurricane Maria. With Aftermaths 2: The Noise in Indonesia, the label has expanded that idea into a globetrotting series, while creating an essential document of the country’s vibrant avant-garde music. Designed to raise money following the earthquake and tsunami that left hundreds dead last year, the collection showcases 30 different artists and encompasses a massive range of sound. Compilers Mike Sugarman and Sean Stellfox take extra care in their sequencing, arranging harsh noise, hypnotic synths, and experimental gamelan music to make Aftermaths 2 flow incredibly well, even as it stretches past three hours. Early tracks, like Stylucipher’s opening “Phenobarbital” and Lintang Raditya dan Teman’s atmospheric gamelan piece “Bentur,” ease you in before Joe Million and Indramenus’ searing “Kidul Kulon” goes off like a match in a gas can. Aftermaths is full of those kinds of shifts, but it’s that very unpredictability that makes it such a thrilling listen—a primer on some of the most exciting noise music being made in the world right now.

Dick Miller, who died this month at 90 years old, was one of the great character actors of all time. Once dubbed “the best actor in Hollywood” by B-movie god Roger Corman, Miller popped up in so many cult movies that it would take more time than I have in this column to list them all, though he’s best remembered for Gremlins (and Gremlins 2, despite the fact that his character was killed off in the original). And while the 43rd release in O’Rourke’s diaristic Steamroom series continues his droning tape music evolution, the movie-obsessed producer included a rare additional note in this installment, dedicating the piece to Miller. The album length “Between Midnight and One” is a highlight, a brighter turn from the darkness of the last few, and free of “those damn cicadas” that O’Rourke, in an interview last year, complained to me were bleeding into his recent home recordings. It’s an ideal opportunity to check back in with O’Rourke’s series, and the most unexpected (and likely only) album dedicated to the late actor’s legacy.

Indonesian tape music composer Marcel Thee brightened up the sound of his Strange Mountain project a few years ago, enough to credit his recent work to “Strange Mountain II.” It’s one of those rare occasions where the sequel is better than the original, and the tender Please Wait For Me, Please Wait Forever may be Thee’s finest work yet. His soundscapes can softly glimmer, or hiss like radio noise, but they always enhance the delicately manipulated field recordings at their center. Opener “As The Sun Parts, We Remain” sets the stage with an enveloping drone before gradually focusing on the softly crunching rhythm of footsteps in snow. The little things Thee picks up on in the background, and often pulls to the front, are what give Please Wait For Me much of its character. According to the liner notes, he recorded the album’s spiraling piano tracks in an unused practice room where his daughter was taking violin lessons, and sometimes the sounds of other children practicing their instruments bleeds into the edges of the songs, creating moments that feel simultaneously performative and intimate. It all makes for a truly enveloping listen.

Toru Takemitsu’s original score to Masaki Kobayashi’s 1965 anthology film Kwaidan is one of the most unique in horror history. The composer matched the film’s four ancient ghost stories with classical instruments from the era, like the biwa, which is similar to a lute, and is traditionally used in conjunction with storytelling. It’s an untouchable score that Austin synthesist Peter Tran ambitiously reimagines with New Age dreaminess on his excellent new album as Curved Light, Airs Of Modality. Recorded during a recent live rescoring at Austin’s Alamo Drafthouse, and featuring different musicians for each segment, Tran takes on the daunting task of adapting Kwaidan’s epic third folktale, “Hoichi, The Earless.” The story follows a blind traveling musician called upon to perform for a ghostly audience. In the film’s most iconic image, Hoichi is painted in protective Japanese characters by priests who, crucially, forget to paint his ears (you can guess from the title how it ends). Twice the length of any other segment, and glacially paced, “Hoichi” isn’t Kwaidan at its best, but its most. The tale ignores scares and doubles down on hypnotic imagery, massive sets, and gorgeous color—all elements which Air Of Modality fits perfectly. The crystalline kosmische of “Hoichi, the Blind Minstrel” and “The Search” fuel the immensely hypnotizing imagery and movement on screen just as Takemitsu’s original did, but without sounding anything even remotely like it. It’s worth the effort to sync Air Of Modality up as a soundtrack to the film, but as a standalone album, it’s already very much worth your time.

HOTT MT (an acronym for Hour of the Time Majesty 12, although “HOT MOUNTAIN” is more fun to say) is the duo of Nick “Spooky” Logie and Ashleigh Allard, co-founders of the Los Angeles DIY venue Non Plus Ultra. Just about the best venue in the city before it was shut down in 2017 by police in the wake of Oakland’s devastating Ghost Ship fire, Earth On Heaven makes its closure sting a little less, if only because it gave Logie and Allard the time to craft this gem of an album. Bookended by tracks that sound like a fairy flying through the caverns of dungeon synth, the music fits the band’s fantastical full name with a sound that threads a baroque ornateness through lysergic synth pop. Though the pulsing rushes of “Angel” and “Descending Forever” offer bursts of momentum, Earth On Heaven more often opts to hit the brakes to great effect. It ends up making all the difference, as HOTT MT truly find their voice in the spacier, stripped-back slow burners like “California Sunset,” “Fairies Fountain,” and “Climbing and Reaching.” Bringing to mind the Radiophonic Workshop-worship of Broadcast and The Focus Group, as well as like-minded neighbors such as Weyes Blood and Julia Holter, Logie and Allard hit a sweet spot on those tracks that anchors Earth On Heaven and leaves exciting possibilities for their next move.

First, please take a moment to appreciate the album cover, and the design of Mark D. Pencil, the anthropomorphic rapping pencil who, in this volume, teaches you Spanish. I can’t say this release will improve your grasp of the language, but it absolutely nails the second half of the unholy combination that is “edu-tainment.” Learning Spanish With Hip Hop will leave you confused, laughing, and thinking, “Wait, that would actually be a cool sample” countless times before it even veers into the completely baffling trance remixes (really!) at the end. It all left me with zero additional knowledge of Spanish, but an infinite amount of affection for Mr. Pencil’s work.