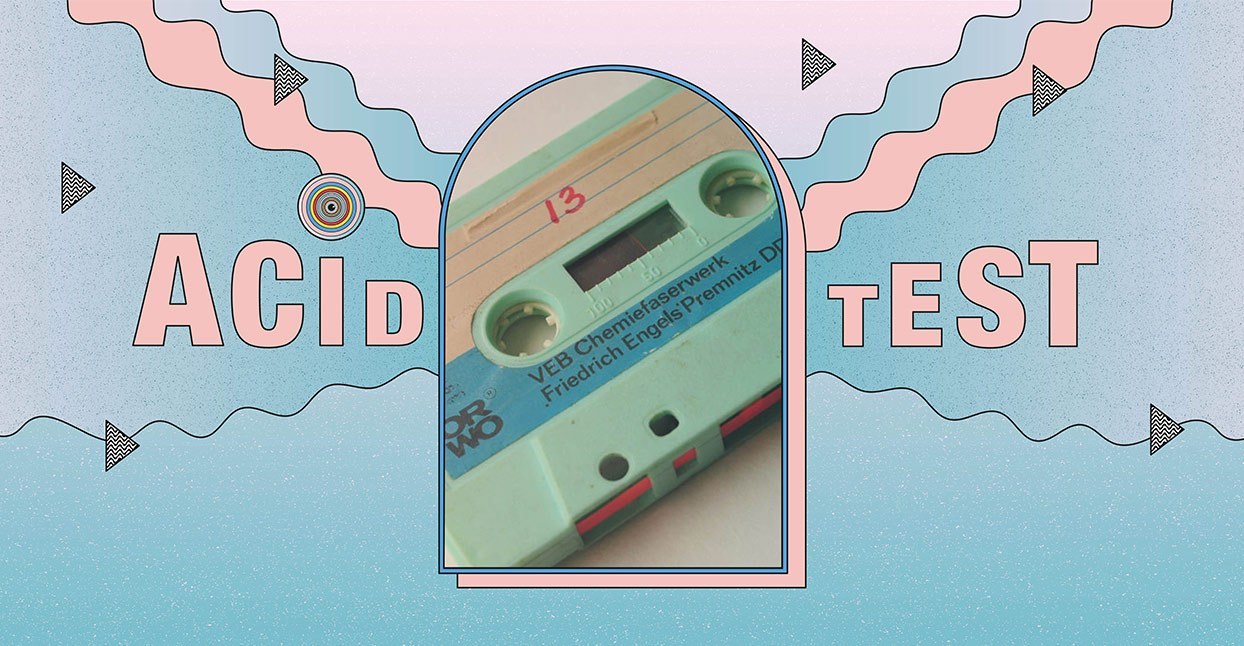 Bandcamp’s outer limits continue to be a rewarding place for psychedelic music, noise, vaporwave, and music that’s wholly uncategorizable. In this volume of Acid Test, our highlights include a classical reissue from a video game music pioneer, lovingly stitched-together church chorals, unearthed archives from an amateur Soviet pianist and the best thing anyone made this past 4/20.

The story behind the mysterious recordings of Rachel Bonch-Bruevich is either stranger than fiction, or a ruse undertaken with such commitment you have to respect the ambition. The scant information available on Bonch-Bruevich describes her as a late-Soviet pianist whose amateur recordings were discovered and then digitized by Nazlo Records. They’re released as unedited, 30-minute side-long takes, and housed in meticulously made, highly-limited recreations including a 3” reel-to-reel tape, an MC60 microcassette hidden inside a book, and a tape with a dead fly carefully tucked inside. The new 13 (most releases are simply a number) is the latest addition to her ongoing archive, featuring two lengthy piano passages dubbed from the portable recorder she made them with. The hypnotic nature is only emphasized by split-second gasps of pop music that interrupt like interfering radio signals, suggesting Bonch-Bruevich taped over whatever recording materials she had. Start here, start anywhere, and you’ll find one of the most absorbing mysteries currently on Bandcamp.

Though she’s composed for nearly every form of media, and in recent years moved deep into the classical Arabic music world, Japanese composer June Chikuma is still best known for her kinetic soundtracks to the Bomberman video game series. That vibrant music is responsible for saving my Sega Genesis from the frustrated rage of an 8-year-old me (forget throwing controllers, Mega Bomberman is the only game to make me throw the entire goddamn console). Chikuma released her 1986 album Les Archives (rereleased this month by the amazing label Freedom To Spend) one year after her debut in the game industry with the NES classics Bomberman and Adventure Island. The album’s dizzying web of interlocking synths, drum machines, samplers, and strings show Chikuma’s vision was already far beyond what 8-bit consoles could contain. The tracks merge modern classical, early techno, and the boom-bap that Run-D.M.C. mastered that same year on Raising Hell. Somewhere in that wild fusion, you can hear the future of video game music—and I don’t just mean in Chikuma’s own 16-bit peak with games like Mega Bomberman and Japanese-only cult classic DoReMi Fantasy. Even morethan 30 years later, Les Archives still sounds like the future of video game music.

“I don’t consider myself religious yet I feel particularly drawn to sacred music,” the French artist Perlesvaus explains on the Bandcamp page for Une si granz clartez an vint, an album made from patchworked church recordings, as lovingly assembled as a scrapbook. Citing inspirations that include Ian William Craig and Akira Rabelais (whose legendary medieval choral-inspired Spellewauerynsherde is the major touchstone here), Perlesvaus often begins his songs with a field recording—an organ rehearsal in an empty church, a mass in Mont-Saint-Michel, a flurry of parishioners spilling out after a service—before gradually manipulating them into something new. Each track is paired with notes that feel like short diary entries designed to bring specificity to each scene. “The cathedral was empty and the doors wide open. I guess someone must have been rehearsing on the organ. I should get a better recorder,” they write on the opening “Immaculate Silence.” The organ recording is gorgeous, but it’s the little sounds picked up in the background—a flock of birds, a murmur of people walking, the screech of a train—that paint a vivid picture, before it’s impressionistically blurred by the Ableton-assisted second half. Despite the often self-critical tone of those notes (“It’s probably very annoying”) I hope Perlesvaus realizes how good this album is, because I can’t wait to return to the world that Une si granz clartez an vint creates.

This split release by vaporwave artist From Tokyo To Honolulu combines two albums on a single cassette—one is new, the other is from 2017, but is getting its first physical release here. Despite that distinction, these 10 tracks blur into one beautifully drifting 90-minute whole. Beats take the backseat to pure texture, and the tracks are often built entirely out of distorted relaxation-music touchstones, like babbling brooks, birdsong, and New Age drones. Though listening through headphones offers a soothing escape, the album is best experienced as background noise, like traditional Japanese environmental music. Put it on, find something to do, and let it linger at the edge of your attention. It doesn’t take much time for it to transform a room.

Performance artist Anna Homler is best known for her 1980s project Breadwoman, which was rediscovered by a new generation thanks to a reissue by RVNG. But the 70-year-old singer is only getting better on the remarkable new EP Deliquium In C. Each track features a different producer, but Homler adapts her otherworldly voice to each, unifying them all. On “Nepenthe,” she brings a seance-like intensity to glimmering synths from PAN Records alum Heatsick, recalling Karin Dreijer of The Knife and Fever Ray. “Almost Beautiful” reunites her with dub techno producer The Pylon King (Homler’s partner in the ‘90s duo Voices Of Kwahn) where her reverb-drenched humming melts into the bleary piano work around it. The biggest surprise is the closing title track, which is longer than every other song combined, and features Homler’s original Breadwoman collaborator, the late composer Steve Moshier. The sprawling soundscape provides a powerful postscript to Homler’s most famous project; after hearing Deliquium In C, it feels like her second act is only just beginning.

Visible Cloaks, the Portland duo of Spencer Doran and Ryan Carlile, sharpened ambient music to an icy, pristine edge on their dazzling 2017 album Reassemblage. Merging ancient instruments and ASMR-inspired digital production, they sounded utterly removed from time. Perhaps that’s why they work so well with their counterparts in this volume of FRKWYS, RVNG Intl.’s ongoing series of inter-generational collaborations. For serenitatem, Visible Cloaks connected with Japanese ambient pioneer Yoshio Ojima, whose own work from the 1980s sounds like it could have been released yesterday. Ojima’s glassy textures were one of the highlights of Kankyō Ongaku, a recent compilation of 1980s Japanese ambient compiled by Doran, and the quartet (they’re joined by Ojima’s longtime collaborator, pianist Satsuki Shibano) gel with an otherworldly power on pieces like “Anata” and “Lapis Lazuli.” Just as interesting are the moments the group push one another into new territory, such as the remarkable closing track, “Canzona per sonare no.4,” a gorgeous, bare showcase of Shibano’s piano work. Visible Cloaks feel primed for a big statement on their next album, but serenitatem is an essential detour and a platonic ideal of the FRKWYS mission.

Dominick Fernow remains a pillar of the U.S. underground noise scene with his work as Prurient, but he’s also at home DJing massive clubs like Berghain (where he’s taken up a residency) as Vatican Shadow. Once a lesser-known side project, Rainforest Spiritual Enslavement bridges those two extremes. While Vatican Shadow can ignite the right dancefloor, RSE creeps like ivy toward the chill-out room, with dub techno soundscapes that can inspire the same atmospheric dread as Prurient’s most ashen moments. It’s a sound that often gets better as the scope grows, like on the 34-minute epic “Jungle Is A Shapeshifter,” which opened 2017’s excellent Ambient Black Magic. That M.O. continues on the excellent Panama Canal Left-Hand Path EP, which flows like a single 42-minute journey through deeply uncharted territory. The opening “Hunting Down Individual Mosquitoes” is masterful in its restraint, using spare rattles of percussion, vivid field recordings, and valleys of silence to amplify the tension. Fernow understands that dub is as much about what is taken out of the mix as what’s put into it, and every clang, water drop, or echoing synth stab towers in empty the space around them. “Isthmus Dark Arts” loops birdsongs into eerie insectoid chatter, while its buried 4/4 beat functions like a nervously quickening pulse. By the colossal two-part closer “The Mountain Didn’t Want To Be Cut And The Mountain Fought Back,” beats are abandoned almost entirely, but Fernow maintains the threat that something might pop out of the murky darkness for the entirety of its 25 minutes. That sensation, a feeling almost like being hunted, is perhaps the project’s defining quality. It’s made Rainforest Spiritual Enslavement the most exciting project Fernow has going right now.

The recording of the speedrun adventure game Myst III was uploaded April 19, and this head-trip of an improvised score appeared April 21, so I’m inclined to believe Pittsburgh experimentalist Dan Willis had a very special 4/20. Though the Myst series is defined by its ambience, every fragmented guitar lick and free jazz flourish only enhances its already eerie-as-hell atmosphere. Live scoring video games might seem like a pursuit specific to the stoned, but album this proves it’s an idea with tons of potential, and plenty of originality.