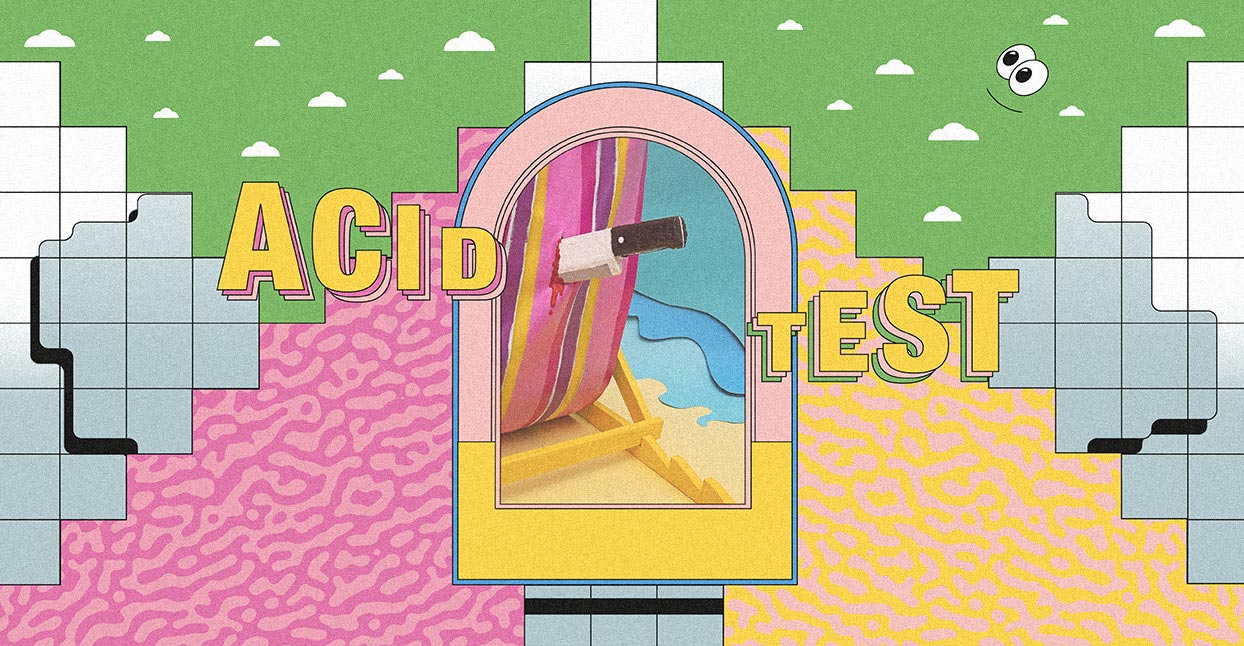 Bandcamp’s outer limits continue to be a rewarding place for psychedelic music, noise, vaporwave, and the purely uncategorizable. In this volume of Acid Test, Miles Bowe digs up ethereal bedroom acoustics, orchestral pop, and two non-English spoken word albums that communicate beyond language.

Multi-instrumentalist Simon Hanes got his start as a member of Guerilla Toss, when the noise-psych outfit was still in its frenetic early days. What started out as a goofy side project inspired by giallo horror, Italo pop, and Nino Rota’s iconic film scores for Federico Fellini is now a small orchestra called Tredici Bacci, in which Hanes—sometimes in the guise of his suave alter ego, Luxardo—acts as conductor for 15 to 20 musicians. With La Fine Del Futuro, Tredici Bacci finally embrace all of the musical theatricality coded into their DNA from the start. There are delicate operatic pop routines like “Barbarians” and spritely songs like “Promises, Promises.” Legendary composer and Foetus founder JG Thirlwell turns up on the dramatic centerpiece “Emmanuelle.” The first time I ever saw Hanes, he was performing naked in a dingy basement in Boston. After La Fine Del Futuro, I genuinely believe he’ll be on Broadway someday.

The album page for this self-titled gem is light on information: we know that Precious Metals are from London, and that the album took three years to make…and not much else. But that “less-is-more” approach suits the record perfectly. The abstract lullabies on this brief album are made up of only a few elements—a delicate guitar strum, a faintly hovering synth, a smattering of programmed drums—but the anonymous creator wrings intense feeling out of each and every one of them. At times, the echoing acoustic guitar recalls YYU’s early vaporwave-adjacent classic TIMETIMETIME&TIME, while darker turns such as “Winter” bring to mind the occult folk-drone of Natural Snow Buildings. The songs The Precious Metals stretch out in multiple directions, crystallizing into different forms every time.

Seven years after his unjustly overlooked debut NXB on the influential (and tragically defunct) label Hippos In Tanks, Vietnamese-Chinese rapper Vinh Ngan, aka Triad God, has returned. By the time Hippos founder Barron Machat died in 2017, many of the artists he shepherded through his label—including Grimes, James Ferraro, and Dean Blunt—had built sturdy careers in their chosen musical niche. Ngan, on the other hand, seemed to disappear into the same ether he’d emerged from. And while Ngan’s old collaborator Palmistry has gone on to a successful career with Mixpak, the duo reunite here for 黑社會 Triad, a follow-up so fully formed it makes NXB feel like a mere dry run. Ngan doesn’t really rap anymore, he just wanders through Palmistry’s icy productions, leaning on a soft spoken word flow that evokes unbearable loneliness. Tracks like “Chow Bat Por” and “So Pay La” feel like monologues set to music while others, like “Hay Wan” and “Chinese New Year,” feel like candid conversations taking place while a spectral music box plays somewhere in the distance. Most of the album is in Ngan’s native Cantonese, but brief moments of English, like “Gway Lo”’s repeated phrase “Rapping is a lifestyle / Know what the fuck I’m saying,” offer clues to the songs’ themes. That certainly applies to “Babe Don’t Go,” where Palmistry hones the sound of modern hip-hop to a pointillistic edge while Ngan’s titular plea grows more and more painful with each repetition. 黑社會 Triad mostly distorts and inverts modern rap conventions, but the delicately Auto-Tuned closer “Chinese New Year” hints at pop ambitions the rest of 黑社會 Triad defiantly rejects. It all amounts to a debut LP that, even after all these years, feels utterly original and vital.

With the delicate bedroom folk of her 2017 debut album Fear Is The World, Russian songwriter Natalia Salmina immediately stood out from other artists on New Age-inspired label Constellation Tatsu. Salmina is working on a follow-up due later this year, but this extended mix for Métron Records serves as a brilliant stopgap. Over the course of 32 minutes, Salmina blends fluttering kosmiche synths, 12-string acoustic guitar melodies, and her own ghostly vocals. Her vaporous passages flow so smoothly that it rarely feels like a mix of individual pieces, but more like a single, cohesive piece. As much as her stellar debut, this subtle gem raises the expectations for what will follow.

Chicago experimentalist John Daniel is a veteran of drone music, but he calls Passageways his most personal work to date. Inspired by his childhood growing up in the Cleveland apartment complex his parents managed, each of the album’s five pieces are both absorbing and distant, like getting lost in a memory you can’t fully remember. Though Daniel’s unspooling synths make for some of the prettiest music he’s ever recorded, there’s a complexity to the songs as well. His pieces are subtly, but constantly, in motion, mixing sadness, beauty, and unease to create an idea of home that only exists in gradually dissolving memories. It’s an album that chases this unreachable destination like the horizon, but as the warm glow of its stunning 15-minute closer “Various Sources of Light” suggests, remembering can be a healing and necessary act.

French experimentalist Roméo Poirier, who used to record under the name Swim Platførm, has become one of the strongest artists on the Kit Records roster, creating oceanic electro-acoustic soundscapes. Following his gorgeous debut Plage Arrière, Poirier teams with Norse poet Lars Haga Raavand for Kystverk, an album inspired by Norway’s coastline and North Sea. While Poirier takes a more supportive role, shifting tones and atmospheres to complement Raavand methodical wordplay, his soundscapes never fade into simple ambience. Synths shift and rock like waves, submerged drums ripple under the surface and occasional pulses of sub-bass pull like hidden currents while Raavand’s soft voice floats on top like a buoy. Unless you know Norweigan, you won’t understand much; but Poirier and Raavand manage to go beyond words, communicating a chilly nautical majesty.

Tim Thornton’s unconditional love for sound shines through in everything he does—and he’s done a lot. Under multiple monikers on his label Suite 309, Thornton smashes noise, glitch, and IDM to make musical experiments that remain exciting and joyful, no matter how abstract they get. Last year, he released an album that was literally just the sound of oil boiling on a stovetop and somehow made that a total blast. Thornton’s primary project, Tiger Village, has been a highlight of Hausu Mountain since the label’s early days, and it makes a welcome return with the kinetic Modern Drummer. True to its name, the album is filled with micro-edited percussion samples that overflow across the tracks the same way short-circuiting synths do on his previous releases. Think of Autechre’s Confield blasting in a carnival, and you’re close to the gleeful mayhem unleashed on tracks like “Summer Bells” and “Ooh La La,” while the occasional splashes of synth (especially on the one-two punch of “Soft, Real” and the live-recorded “Beat Tape”) add quick blasts of color. If you’ve ever wondered what it would feel like to be the ball in a pinball machine, this album provides a fair approximation.

Italian duo Rishi Sigurd Vlote and Harshil Filippo Chiostri describe themselves as “Shamanic Trance Dance-Soul Hunting-Sound Healing-Drum Circle facilitators,” and I love them for many reasons. For their latest album, Remember Your Freedom, the duo provide lengthy liner notes which lay out their goal to “create a soundsphere inducing trance and healing waves to dance.” They even provide detailed instructions on how to do that dance (blindfolds and proper “fire-breathing techniques” are involved). Most of all, I love this album for its simple, all-caps message: “DANCE YOUR WAY TO FREEDOM.”